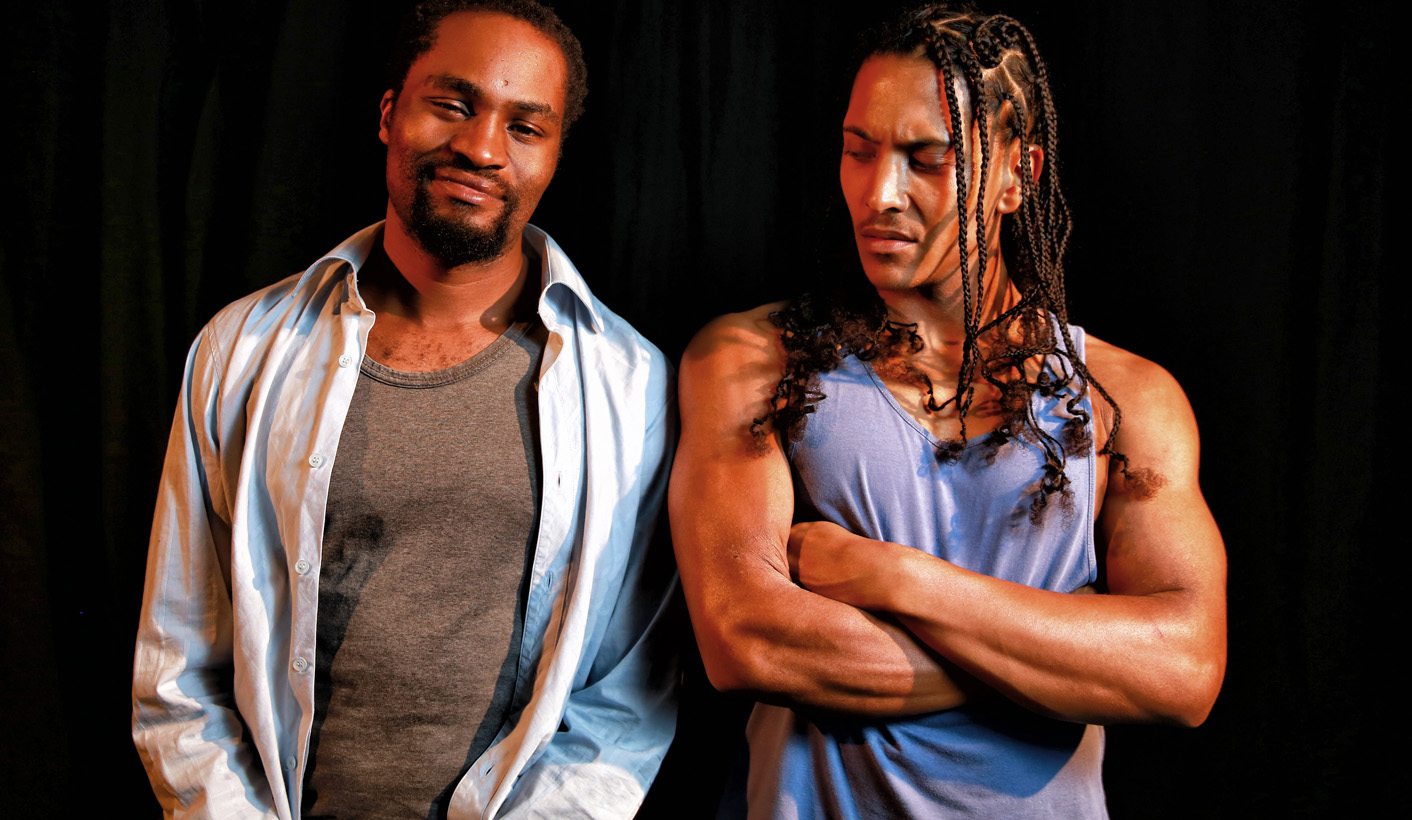 Topdog/Underdog earned American playwright Suzan-Lori Parks the first Pulitzer given to an African-American. It’s by turns quirky, crazy and gritty, drawing us under the arm as it strides to its inevitable conclusion. By CARLA LEVER.

It’s rare for people to work so hard to make something look so bad. In this case, though, that’s a very good thing. Alexander Bar have stripped the little black box theatre Capetonians have come to love, exposed the floorboards and windows, painted the walls to completely transform the stage into a slum flat: the set for Pulitzer prize winning play Topdog/Underdog. The play is more than just a cosmetic commitment: Topdog/Underdog will play exclusively from 7-9pm for the next two weeks.

It’s a big move for Alexander Bar, one that sees them step away from their winning festival-style formula of two different hour-long shows a night and regular rotation of productions. A risk, certainly, but one that the little theatre that punches well above its weight has earned after years of solid support for independent productions (not to mention their lush bar menu) has built them a loyal Cape Town clientele.

And it’s a risk worth taking: Topdog/Underdog patently has everything going for it. Two fiercely talented actors playing a Pulitzer prize-winning script in an intimate theatre, with hotshot direction and full institutional backing. What it needs now is support.

Topdog/Underdog earned American playwright Suzan-Lori Parks the first Pulitzer given to an African-American. It’s by turns quirky, crazy and gritty, drawing us under the arm as it strides to its inevitable conclusion.

Two brothers are caught in a dog-eat-dog world of low-income survival, pitted against each other as much as they’re bound to each other. The younger brother, Booth (Daniel Richards), scorns his smooth, older brother Lincoln (Marty Kintu) for having lost the ambition that made him the best card sharp on the streets back in the day. Lincoln has sworn off street hustling, holding down his steady but demeaning job playing his presidential namesake at an arcade, letting the morbid-minded pay to “assassinate” Honest Abe as he pretends to be engrossed in a play.

In reality, of course, it’s us who take the hit, sitting unsuspectingly in the audience while we’re slugged with Parks’ razor-sharp, deeply compelling (and often R18) dialogue. There’s no rush to Parks’ slow reveal; the joy is in the patter, not the end product. As the play draws to its inevitable conclusion, there’s a richness of things to think about: everything from the bizarre politics of whiteface to the age-old drama of sibling rivalry. In fact, Parks has a talent for mixing together the universal with the niche: sure, the play is about the need for human connection and validation, but it’s also about the intangible value of live experience. Why is the hustler’s patter as important as his technical skill? Why is shooting a living “President Lincoln” more satisfying than a mannequin? Why, for that matter, is theatre different to a movie? The two characters take us through the search for a satisfying narrative arc, whether in history or life.

Strategy, subterfuge and very human fragility are laid out in two acts of signature moves and sibling manoeuvring as the brothers play a dangerous game of vying for the upper hand. Booth has the apartment, but Link brings home the bacon; Booth has the ambition, but Lincoln the skills. There’s no way this story is ending well, yet something grabs us by the hand and ensures we’re in it for the full ride.

A large part of that compulsion comes courtesy of Marty Kintu (Marat/Sade, Dredd) and Daniel Richards (West Side Story, Johnny is Nie Dood Nie) who take us through the delicate dance of power games impeccably. Kintu’s weary resignation and slow, easy manner is perfectly balanced by Richards’ hopped-up impatience. Kintu holds moments of tension, confident in his pauses as much as his patter, where Richards is a sleek, coiled spring: his fidgeting and explosive interjections telling character traits in themselves.

Accent work is tricky, but this American tale was smooth: I was all in from the get-go. Of course it helps that the two actors themselves exude confidence: at ease with the space, the script, each other. Director Mdu Kweyama’s talent can be seen all over this, from the lifted physical sequences that break the text, to the easy interplay with space. The performance space is small but the action never feels cramped. On all fronts, there’s trust and real workmanship going into the narrative development.

“People are funny about how they like their history,” Lincoln observes after pondering the “right” way to enact his presidential death in the arcade. “They like it to unfold the way they folded it up. Neatly like a book. Not raggedy and bloody and screaming.”

It’s this difference between confrontation and confabulation that the script captures so well. The line between fiction and reality is thin and, Park suggests, inevitably drawn either in blood or blood money. Everything else is just narrative spin.

Alexander Bar’s Theatre works off the motto “Choose Live”. Likewise, in the play, Booth implores his brother late one night to “Make it real”. Don’t go and see a movie tonight. Make it real with a night at the theatre. After all, unless your name’s Lincoln, what’s the worst that could happen? DM

Topdog/Underdog runs from 4 to 20 May at 7pm (excl Sundays)
Running time is 2 hours and 10 minutes, including an interval.
Tickets are R100-R140, see website for details.
Bookings: https://alexanderbar.co.za/show/topdogunderdog/
photos by Nardus Engelbrecht Photography