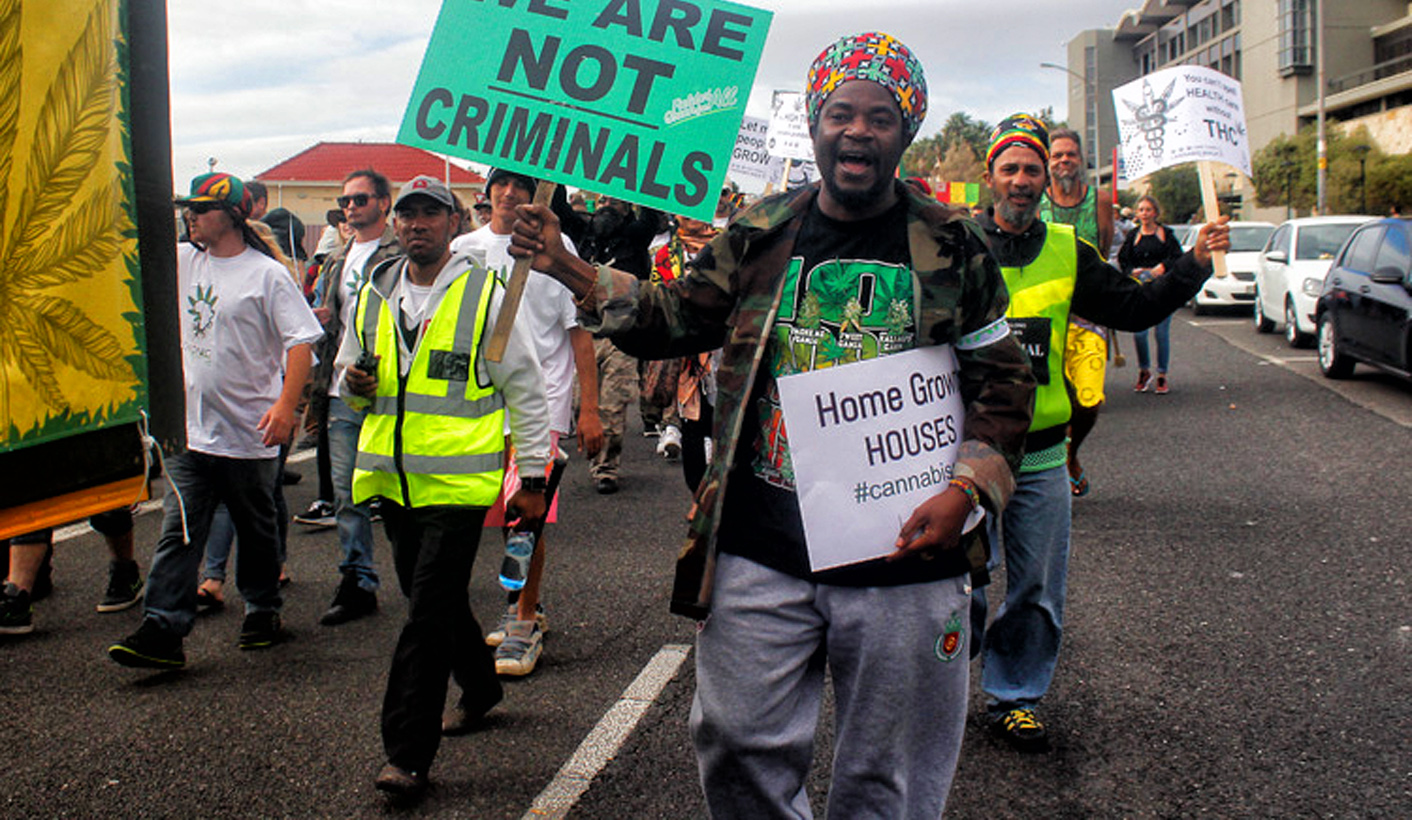 Across the world – and in the Mother City – people are marching for the decriminalisation of weed. By Ashraf Hendricks for GROUNDUP.

At least 500 supporters of the decriminalisation of cannabis marched through Cape Town city centre on Saturday. This global event happens in cities across the world on the first Saturday of May. It aims to promote cannabis culture and its legalisation.

People smiled gleefully as they walked through the streets smoking copious amounts of cannabis through all sorts of crafty contraptions. A truck led the way, blaring tunes by artists such as Bob Marley, Sublime and other reefer classics like. An MC on top of the van rapped to some of the music and shouted pro ganja slogans throughout, keeping the vibe upbeat and somewhat party-like.

Many interesting devices were used.

Jeremy Acton, leader of the Dagga Party, said that he has smoked marijuana for 30 years, and joined the march to be with “the people of my culture”. Acton was one of the applicants in a Western Cape High Court case in which Judge Dennis Davis ruled that dagga could be used and cultivated in your home privately.

Despite this landmark judgment, Acton wants the law to go further, and to be similar to those of alcohol and cigarettes. “We want the right to carry our cannabis in our pockets … like a person can carry cigarettes,” he said. We would also like to “smoke our cannabis in smoking zones in various public and social facilities”, said Acton.

The march proceeded down Keizersgracht Street.

Acton said that cannabis is a resource of the future. “Everything that we lack today could be provided by cannabis. Whether it’s the food from the seed or the money that is generated in [the] manufacturing industry and clean energy,” said Acton.

In cannabis circles, Acton is somewhat of a celebrity. Throughout the march, people would come over to greet him, take pictures together and even show off some of their prized bud.

Jeremy Acton in the centre, dressed in blue, is surrounded by fans.

Jo Hout, lead organiser of the march, said that although the court case hasn’t completely legalised marijuana just yet, it’s “great” because “people have become comfortable. They’re talking about it. They’re making jokes about it.” He said this was the 17th cannabis march.

A man holds a giant spliff (not real) during the cannabis march in Cape Town.

Moses Julius Kapa, a Rastafarian from Marcus Garvey in Philippi, said that he joined the march because he wants marijuana decriminalised. Kapa said that despite the court ruling the police “still brutalise us and arrest the people”.

People smoked cannabis openly as the police watched the protest.

A handful of police vehicles kept watch during the march and although many supporters were lighting up dagga, for this one public event, no action was taken. DM