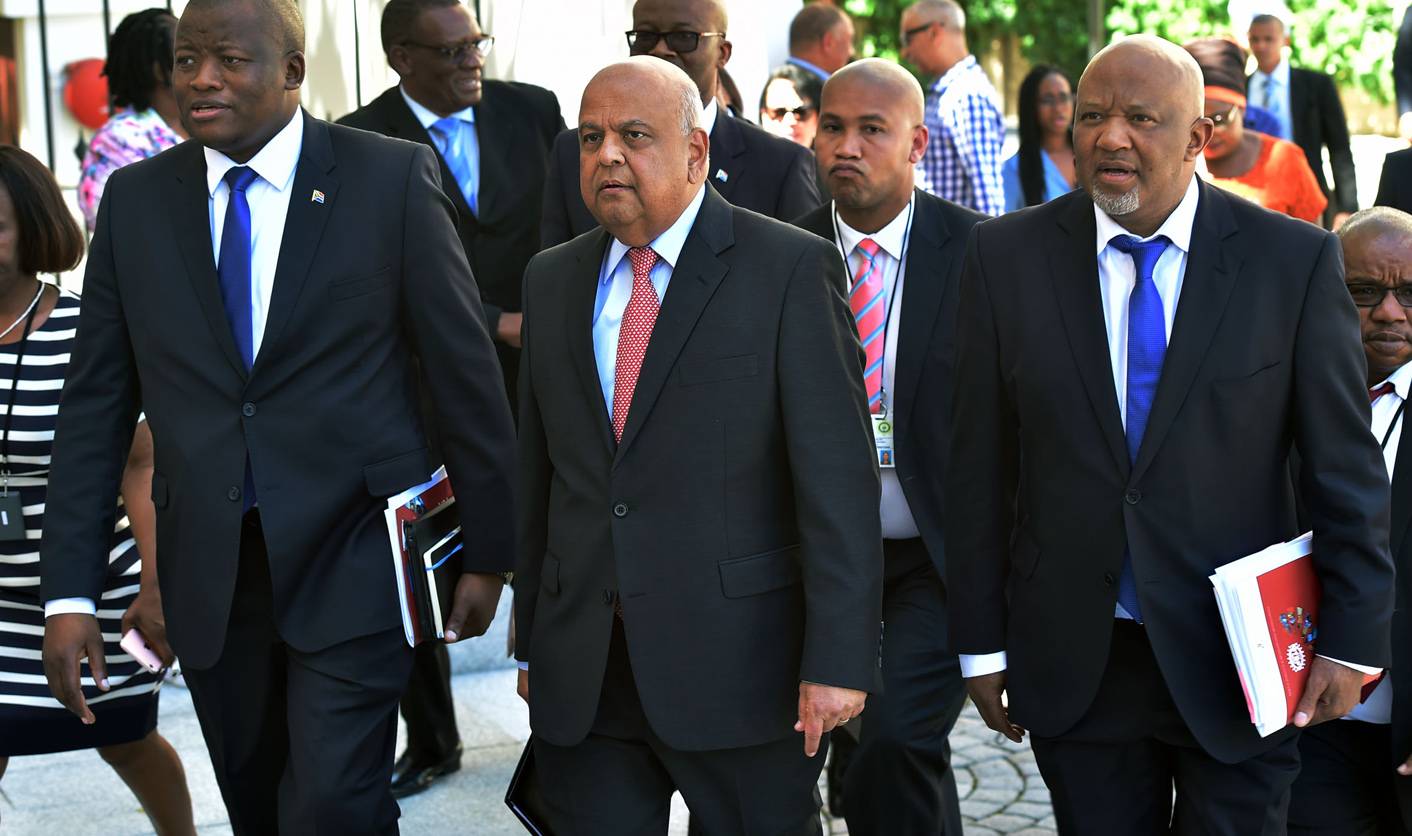 Former Deputy Finance Minister Mcebisi Jonas asks, “What is the political moment in which South Africa finds itself?” Although this question is on the face of it one of political analysis, it is actually a matter of ethics and a call for responsible leadership – a moment marked by South Africa’s peculiar socio-economic challenges with their ethical underpinnings, which calls for responsible leadership. By MARIUS OOSTHUIZEN.

Former deputy minister of finance Mcebisi Jonas was recently hosted by the Gordon Institute of Business Science [GIBS] Ethics and Governance Think Tank for a dialogue on the subject of ethics and ethical leadership. He was asked to reflect on the role of co-operation between the public and private sectors in finding solutions to South Africa’s many difficulties. It was put to him that perhaps the 1994 national consensus has reached its limit. In this context, he was offered an opportunity to reflect on the much belabored “trust deficit” between the social partners.

Not unexpectedly, Jonas diplomatically raised the uncertainty about the future of the ANC in terms of policy, given its forthcoming policy conference in June. In light of his highly publicised and courageous refusal to be bribed into handing over the institutional integrity of the Treasury to opportunistic tenderpreurs of the Saxonwold-Shabeen ilk, the GIBS audience listened with admiration to the beloved minister, sobriquets that in the past only applied to very few individuals such as Madiba. The sense was that most people in the audience have given up on viewing the ANC as a “coherent people’s movement”, and this lies at the heart of the unease in the country. While it seemed that Jonas tried to appear relaxed, his obvious ambivalence about the policy signals emanating from the party was reason for concern.

In search of language with which to capture the essence of his reflections on the country’s prospective future path, Jonas suggested that instead of focusing on juicy events and high-profile political spats, concerned South Africans ought rather to assess the state and future of the country in relation to its long tumultuous past, and in so doing work with intent towards a desired future. Citizens need, as he put it, to “join the dots” of current events to provide a systemic analysis –recognising how events and political spats are symptomatic of a central, fundamental problem of abuse of power, one that we need to respond to by working together instead of merely relying on the judiciary and the media to hold individuals accountable.

Jonas’s comments raise the question of collaboration between sectors, particularly the role of business, which is increasingly evolving, with undertakings such as the CEO Initiative and even support of the Save SA project.

Furthermore, he suggested that South Africa needs inclusive growth: not through rent-seeking and mere transfer of ownership of existing assets and old wealth, but instead by unlocking dynamic and expansive investment for productive growth.

“We must create a new pact for a restructured economic order in which the pie is both larger and more equitably shared … this is the only way…”, Jonas argued, to avoid getting the nation stuck in a damaging restructuring process in the form of a greedy “asset grab”. The key, he said, is responsible and pragmatic leadership from all sectors, seeking a way forward to create fairer outcomes with an absence of selfish self-interest.

Beyond pushing back against corruption and opportunities for corruption, such leadership would have to push back against populism, while managing the “spoilers” in our midst – opportunistic cadres who do not share a vision for a collaborative productive future. Such “narrow self-interest” which has now emerged, he said, is to be expected when opportunities for growth are few and far between in an economy dominated by monopolies and systems of entrenched access. New wealth, he argued, is what pragmatic leadership dictates as the only viable alternative economic goal to be worked towards.

The challenge, from the point of view of ethics, is that Jonas’s approach contains within it an ethical conundrum of the highest order: why would a liberation movement such as the ANC reprioritise growth in the economy over the classic Marxist dialectical materialism which was orientated to radical redistribution after 1994? His proposals assert that the prioritisation of economic growth is in and of itself an act of goodwill towards the people, with a healthier economy leading to better livelihoods. On the other hand, such an economically enabling approach would not only lift the tide of the poor, but would also probably benefit the already well-off elite, probably at a faster rate than the poor.

Jonas is arguing for an ethical trade-off – to combat extractive and corrosive corruption by unleashing growth in a partially extractive and somewhat exclusive economy. Inclusive growth then involves a certain trade off, which is where the need for pragmatic leadership comes in. But how does one ensure that growth is inclusive – an especially difficult question given the failure of the “trickle-down” policy approach under former President Mbeki and his finance minister, Trevor Manuel etc, and how does one avert the consequent threat to the 1994 Consensus? In its current form the economy remains partially extractive and somewhat exclusive – one where business can be undertaken fairly and with integrity, but without necessarily giving due regard for the lack of historic fairness due to entrenched systems of dispossession and exclusion.

One could at this point lament the wasted years of declining growth under President Jacob Zuma and point to policy uncertainty, the aftermath of the Great Recession and dampened commodity demand globally. But, the fact is, South Africa now finds itself in a catch-22 situation: the populists want a handover of old wealth and the pragmatists want patience on the part of the electorate. In a way, this is a short-term versus long-term struggle, with pragmatists recognising that sustainable solutions depend on deferring legitimate and pressing demands in order to balance competing interests. Unlike Minister’s Gigaba’s adviser’s Malikane-magic approach to economic liberation, Jonas is arguing for a long slog towards shared and inclusive growth.

So, as Jonas calls for economic pragmatism, his critics might be asking, “Is the courageous minister calling on the ANC to be reasonable, or has the courage of the Freedom Charter’s high moral vision failed him?” In our view, the challenge is to make sense of the complex ethical dilemma that is interwoven in the socio-economic status quo, and subsequent political moment.

This “political moment” which we are in, to borrow Jonas’s words, seems to be one of reckoning: the ANC has to account for its achievements or the lack thereof given its more than two decades of democratic rule. The business community must reckon with its contribution both in terms of employment and tax, as well as its corporate social responsibility that has largely taken the form of small CSI or CSR programmes as opposed to a wholesale social investment which goes beyond CSR, having to address societal challenges in a more systemic manner. Our society must reckon with the culture of anti-Ubuntu that seems to have spawned a now individualistic, materialistic New South African consumer culture among elites of all colours.

A couple of years ago it would have been unthinkable to contemplate an EFF-ANC coalition or a DA-ANC coalition, not to mention the already experimental DA-EFF forced mismatch in some metros. Antagonism between the EFF’s central personalities and the ANC’s top tribesman alone made a coalition unthinkable. Similarly, the DA, viewed by many in the ANC with suspicion, as the remnant of entrenched “white” interests historically represented by the National Party, would have to undergo an ideological contortion to collaborate with the EFF.

Yet this is where we are. This is our political moment. Our social contradictions create the fragile mould in which we have to craft a new consensus. For the ANC to relinquish its struggle credentials and work with the DA, as some would see it, would amount to a betrayal of its core identity, in the view of some. Similarly, for the ANC to reconcile with the EFF would imply a humiliating acknowledgement that the party of Albert Luthuli, Walter Sisulu and Oliver Tambo had temporarily lost its way and erroneously ejected its boisterous political son, Julius Malema, only to welcome him back as a bastion of struggle radicalism.

In Jonas’s “political moment”, these unthinkable permutations seem probable and hinge on an ethical dilemma – to give the poor a fish or to enable the large fisheries of old, the entrenched oligopolies which drive our economy, to make new investments in the hope that they employ many more in the process. The national Budget, as Jonas himself would no doubt concede, cannot sustainably afford the former, and the political moment may not be able to condone the latter for long. Perhaps the path lies somewhere in between, a combination of the two. Can the country’s leaders in all sectors muster the moral courage and foresight to fairly and justly navigate through the dilemma? At its core we face an ethical challenge, with economic and political contours, and responsible leaders must respond to it in haste. DM

Marius Oosthuizen is a member of faculty at the Gordon Institute of Business Science (GIBS) where he teaches scenario planning and strategic foresight.