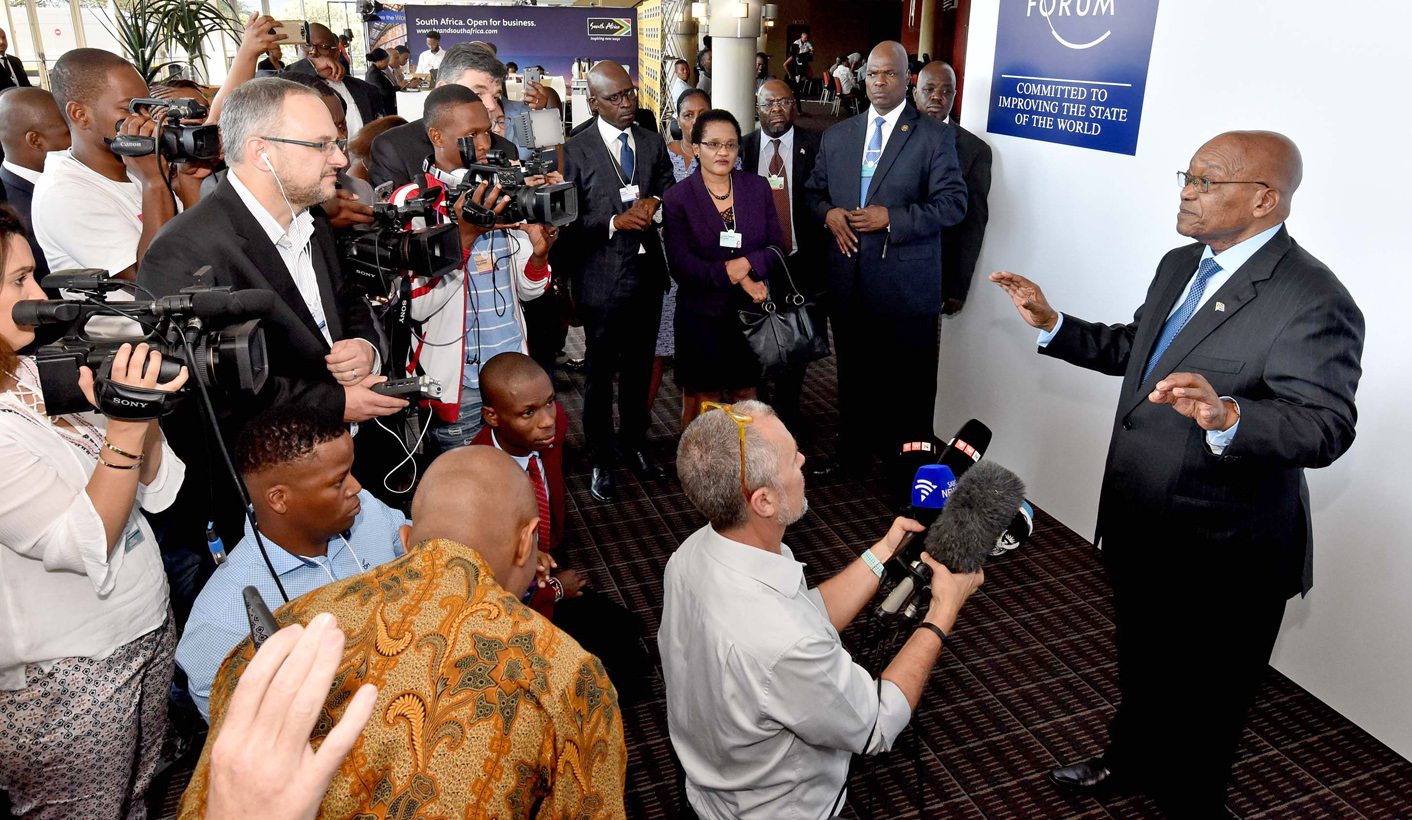 If the World Economic Forum meeting in Switzerland gave rise to the term “Davos Man”, one wonders what the World Economic Forum (WEF) Africa meeting gives birth to? A sort of borderless person criss-crossing airports between Kigali, Nairobi and Joburg, perhaps? Or maybe it’s someone who still actually has feet in different places, different anchors for their identities, with limbs in Joburg, London, New York and Lubumbashi. This is the kind of person who should be in Durban this week. But, inevitably, the pull of news gravity goes to our own issues, and our own commander-in-chief. Who not only spoke in public, but actually, gasp, answered questions. By STEPHEN GROOTES.

Durban. Not Davos. Durban. Hot. Muggy. Wet, all the time. But, at least there’s no trudging, no slipping and sliding and freezing and cursing. Okay, there is cursing, that’s the joy of live radio broadcasting. But the joy of wondering into an accreditation centre and seeing people you know behind the counter, people who welcome you warmly and are really glad to see you. Most un-Swiss.

After that, it was into the belly of the main beast, the Nkosi Albert Luthuli International Conference Centre itself. I’ve been here before, of course. Once, years ago, I had a mad afternoon at some housing conference during a break from the trial of Schabir Shaik. More recently, in 2010 when Julius still wore green, gold and black, there was an ANC National General Council. It was the first time I heard the phrase “National Health Insurance Scheme”. I expect Julius may be back before it’s implemented.

It’s wonderful. Simply wonderful. Smart, grand, somehow magnificent. Everything works. Smoothly and quietly. There is even a media centre with wondrous wi-fi. Of course, to walk into a room like that is to be reminded of quite how long one has been in journalism. Scary.

All through the morning there had been two whispers. Zuma. And Pravin. Both coming. Really, today. And then things started to firm. At first I thought it was sheer fantasy. Zuma was actually coming, and really, was going to take questions. Then, it turned into science-fiction. First I spotted his spokesperson, Dr Bongani Ngqulunga. Actually, he spotted me. It was the first time we’d met, we’ve had some nice off-the-record conversations in the past, and one or two really tough on-air interviews. In person, he gives that kind of polite vibe that can stand people in his game really well. Unlike some people, he’s not petty, he gets it, and he’s happy for you to know that he knows that you know that his position is a tough one.

It’s easy to get precious about that, and say that all journalists should take a stand or report on whatever someone like him says. But there is also a counterargument that it’s important, especially now, to keep all the communication avenues open, to chat and discuss things, at least with a view to ensuring your audiences get access in some way, and a proper understanding of what is going on.

Finally, as so often in life, fiction turned to fact, and up the elevator came Zuma himself. Next to him was Malusi Gigaba, his new Finance Minister. In fact, during the entire walkabout of the conference centre, Gigaba was almost Siamese in his twinship with the president. The distance between them never grew greater than two or three feet. Yes, that is a political comment I’m making.

Eventually, Zuma finished his turn around the centre, and stopped to speak. You can imagine my shock. Zuma, the person about whom I and so many others have spoken and written about so much over the last month, a name that has become almost a symbol more than a human being, suddenly taking questions. I had thought about this moment a little; if you go too hard, that’s the last question that’s asked, if you go too soft, you get nothing.

Being a centrist by nature, I went for what happened on Monday, when Cosatu members booed him at that May Day rally, and asked if he “felt rejected by workers”. Considering how Zuma can speak when he delivers a prepared text in English, or how wooden he can sometimes be in Parliament, it’s often surprising how good he is in these situations. He has an answer prepared, it comes out fluently, quickly, easily.

His main point is that it shows that “we are maturing as a democracy”. He’s used this analysis before. But he says that “clearly people have not understood what democracy is all about”. And then later he points out that “in a country with no democracy there would be an angry president charging the police to go and arrest all of these people”. For him, this is a sign of strength.

Of course, it doesn’t really answer the question. But it’s interesting nonetheless.

A little later, a person who looked like a journalist, but may have been an activist of some description, tried to ask him if he believed “the masses” were represented at this meeting. It was a wonderful moment for Zuma, “Who elected this president, is it not the masses? And who represents the masses? Is it not me? I am an African, I was elected by the Africans, what is your problem?”

After 12 minute and 22 seconds of this (by the timer on my sound recorder), someone decided enough was enough, and off Zuma was whisked away.

It was time to go back to the media centre, enjoy the coffee and lunch (but not necessarily the air-conditioning) and process sound.

Then, around the corner, in the main plenary hall, there was a discussion about leadership during an age of disruption. Lindiwe Mazibuko was part of it. The former leader of the DA in Parliament is good at these things, a panel discussion is a comfortable place for her. In the middle of this discussion she suddenly made what is surely a startling and yet completely correct point.

She argues that when it comes to development in Africa, we are asking all the wrong questions, because we are looking at the wrong people. She suggests that the current crop of leaders in Africa have all failed, they’ve all had generations to get things right, and they’ve all got it wrong. Therefore, we need to look to someone else.

Mazibuko is a good, clear and concise thinker. It is hard to argue with her on this. It might be important to make just this one point though. Which is that creating strong durable democracies is actually pretty tough. On the historical evidence it doesn’t seem that democracy is something you go to from one move. You don’t go from dictatorship to democracy overnight, no matter what intentions you have. Introduce colonialism and imperialism and racism into the mix, and actually you make it that much more difficult.

That said, again, she is not wrong either. Many of Africa’s current problems, falling commodity prices, youth unemployment, climate change etc, they were all foreseeable. And yet leaders did very little about them.

Wandering out of the main hall was to bump into a person whose situation in life has recently changed. I used to call him “Minister”. Now, I call him “Mr Gordhan”. Pravin Gordhan, in the flesh. Rumours have abounded about his visit here. It seems he was personally invited by someone very important in the WEF hierarchy. But I couldn’t possibly confirm that in any way.

There was the usual warm handshake, the inquiry as to how things were going. I may also have mentioned an interview he did this week with that star reporter R. Munusamy. While we were talking a figure approached who looked most unlikely to be at a World Economic Forum event. He had an earring in his right ear. Most un-WEF. But that’s the thing about Mr Gordhan. Hang around him long enough and you might find yourself introduced to the former Finance Minister of Sweden.

After seeing him it was time to do some actual work, write up what had happened already, chat on the wireless and generally pay my keep.

Then it was time for one of the more interesting moments of the day. A discussion billed as “An insight, an idea with Malusi Gigaba”. The plenary hall was well attended. Earlier in the day I had joked with a colleague that the cruelest thing you could do to Gigaba at the moment would be to explain on live television that you had a time problem, and he had to explain what “Radical Economic Transformation” actually was. And that he had a full hour to do it.

As Gigaba strode in, right behind him was Lesetja Kganyago, the Reserve Bank Governor. Already in the hall were Standard Bank CEO Sim Tshabalala, Banking Association executive director Cas Coovadia, and Business Unity SA head Jabu Mabuza. A group of people allowed to be more than annoyed about recent events.

The person interviewing Gigaba was a man called Adrian Monck, a part of the WEF leadership. He sounds Australian. But, full marks for his prep. It’s never easy to interview a person in the position that Gigaba is in when you are not actually in the news environment that he is in. It’s hard to know the real issues, what is really going on, the actual dynamics that are at play. Monck did very well, even talking about “the year of OR Tambo” in the way that an ANC person might. That said, he was probably never going to push hard, because that’s just not the way the WEF does things.

It was difficult to know which Gigaba was going to turn up on the night. The “Chris Malikane” Gigaba, or the “Inclusive Growth” Gigaba. In the end it was the latter. In this investor-heavy room, he was going to say all of the right things.

But. But. And it’s been said before, but it’s worth saying again. The context of Gigaba’s appointment, the way his predecessor was removed, it all points to some kind of corrupt intent. And again, this is a man whose lifestyle just doesn’t live down to someone earning a government salary.

Gigaba has always been a great performer live and in public, and some people waited to take pictures with him afterwards. Then there was a general streaming out of the main halls, and into courtyards and hotels and shuttles and taxis. According to legend there were even drinks on offer later, but your correspondent would not be in a position to confirm or deny if that was in fact true.

Then it was time to repair to the hotel, frown at the room-service menu and wonder who might pitch up tomorrow. Cyril, perhaps? DM

Photo: President Jacob Zuma accompanied by Head of WEF Ms Elsie Kanza conducting a state of readiness walkabout at the Inkozi Albert Luthuli International Convention Centre in Durban ahead of the World Economic Forum on Africa meeting. Wednesday 3 May 2017 (GCIS)