Zuma, Corruption and the Arms Deal: The gift that just keeps on giving 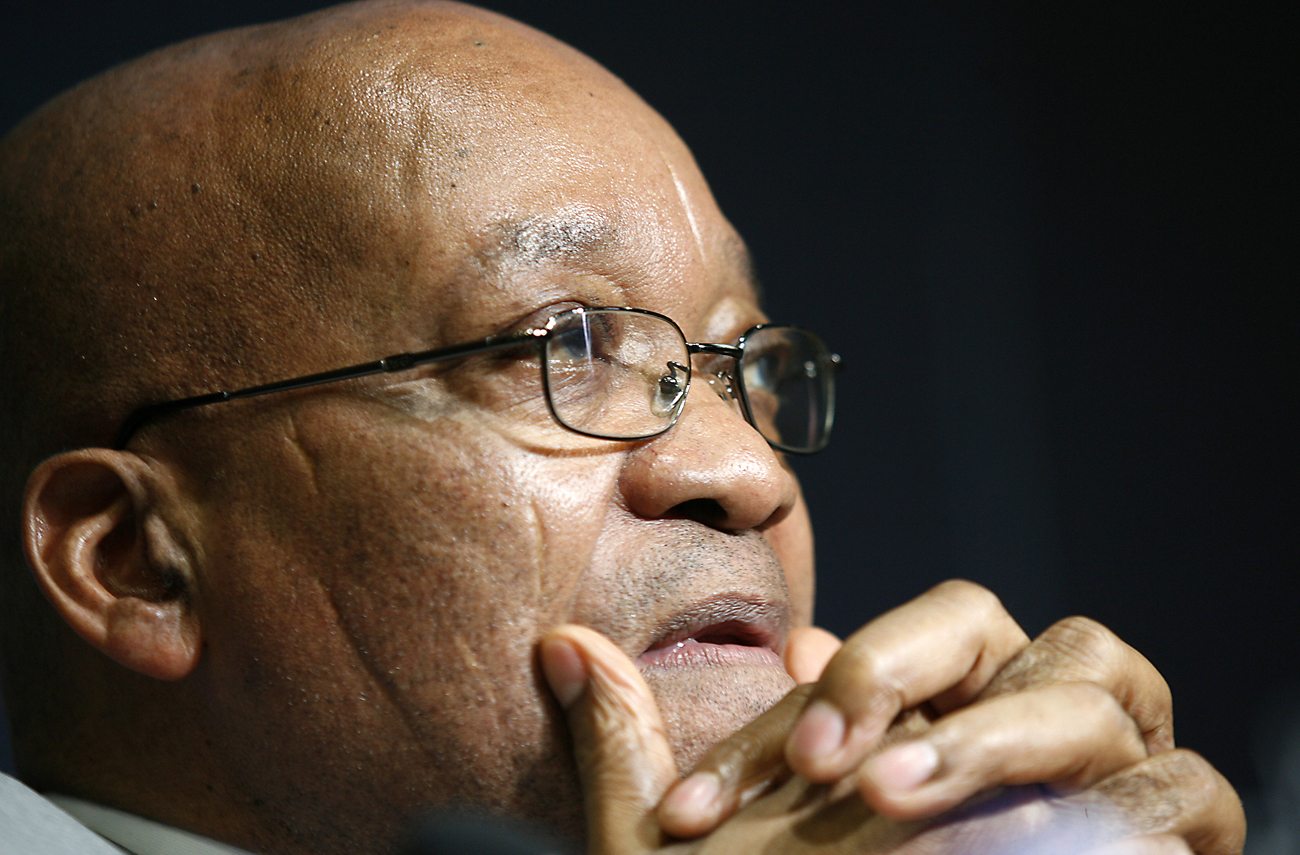 Details in an apparently “explosive” affidavit filed by politically connected attorney, Ajay Sooklal, in the Pretoria High Court and claiming that President Jacob Zuma requested him not to divulge to the Seriti Commission into the arms deal that he [Zuma] had received gifts and bribes, have been in the public realm since 2014. Corruption Watch and the Right2Know Campaign, who launched a court bid in September 2016 challenging the findings of the Seriti Commission and seeking to have the outcome set aside, only learned of Sooklal’s apparent filing to the court from reports in the Sunday Times at the weekend. By MARIANNE THAMM.

Only when they read about it in the Sunday Times at the weekend did Corruption Watch Executive Director, David Lewis, and the NPO’s legal team learn that Ajay Sooklal had filed an affidavit in support of a High Court application lodged by Corruption Watch jointly with Right2Know to have the findings of the Seriti Commission of inquiry set aside.

Speaking to Daily Maverick, Lewis said that Sooklal had not approached Corruption Watch or Right2Know to indicate that he wished to join their application. However, what Sooklal’s affidavit does do, said Lewis, is bear out the contention that the Commission of Inquiry into allegations of Fraud, Corruption, Impropriety in the Strategic Defence Procurement Package – otherwise known as the Seriti Commission – did not conduct an investigation proactively and did not exercise inquisitorial powers to inquire into the underlying circumstances and the mandate the commission was given.

As predicted, after R100-million spent and a four-year “investigation”, Judge Willie Seriti found in 2015 that there had been no evidence of corruption or wrongdoing during South Africa’s 1999 arms procurement deal. Of course, it was this deal that tainted the reputations of so many in the ANC, with Jacob Zuma having become the contemporary focus of it all with his successful legal stonewalling with regard to answering in court 783 charges of corruption related to the deal.

Of Sooklal’s affidavit, Lewis said, “Little of the substance of what he says is new. It was all made known in a Sunday Times article in 2014 and that largely relied on a submission made by Sooklal in an arbitration hearing.”

Sooklal and French arms company Thales had been locked, at the time, in a fee dispute, with the attorney claiming Thales owed him R70-million. Testimony in that matter, totalling around 1,300 pages, was given before retired Judge Phillip Levinsohn in a confidential hearing. It was during this hearing that Sooklal provided a detailed account of his six-year stint as a lawyer and fixer for Thales.

And it was here that Sooklal claimed that Zuma had accepted a R500,000-a-year bribe from Thales – using the code words “Eiffel Tower” and in exchange for political protection in the arms deal probe as well as in the hope of securing future business. What also came out in the wash was that Thales had allegedly given a €1-million donation to the ANC in 2006 and paid from a secret Dubai account into an ANC-aligned trust prior to Thales and Zuma’s standing trial for corruption.

Then there was the attempt by Thales to lobby/pressure former Minister of Justice Penuell Maduna, former ANC SG Kgalema Motlanthe and then President Thabo Mbeki and even dragging in French President Jacques Chirac to drop charges of corruption.

“The commission knew of the allegations contained in Sooklal’s affidavit. They sat back, however, and waited for people to present themselves. They accepted evidence sometimes utilising procedures that were dubious. They did not conduct an inquiry and that is what is drawn out for us by this affidavit. There is nothing new in the substantive evidence that is provided,” said Lewis.

Sooklal’s 60-page affidavit in which he lists as respondents the President of the Republic, Jacob Zuma (in his personal capacity), the Minister of Justice and Constitutional Development, the Seriti Commission, Thales South Africa (Pty) Ltd, Thales SA (Society Anonyme) and the Minister of Defence and Military Veterans, is dated November 16, 2016, two months after Corruption Warch and R2K lodged their application, and makes for predictably sensational reading. One of the most controversial assertions is that President Zuma had asked Sooklal on August 13, 2012, at a meeting at his official residence Mahlamba Ndlopfu, not to divulge what he knew to the Seriti Commission.

He quotes Zuma as saying, “My brother, I have appointed an arms deal commission to finally put to rest allegations of impropriety, bribery or corruption in the Defence Review Project. I request you not to inform the commission that the French were paying me monies over the years up to 2009.”

The attorney is seeking an order “declaring that a serious conflict of interest on the part of First Respondent [President Zuma] rendered his conduct in appointing a Commission of Inquiry into allegations of fraud, corruption, impropriety or irregularity in the Strategic Defence Procurement Package (SDPP) and which was promulgated in terms of Government Gazette No GNR926 of 4th November 2011 unlawful, invalid and accordingly unconstitutional”.

He is also seeking the setting aside of the findings of the commission, alternatively an order to reopen the commission and to receive evidence, including his as well as “any other evidence which may become necessary…”

The actions of Zuma (personally) as well as Thales South Africa and Thales SA (Societe Anonyme) should also be, claims Sooklal, declared corrupt “as contemplated by the Prevention and Combatting of Corrupt Activities Act of 2004 and the Foreign Corrupt Practices Act”.

The attorney states that he has brought the application “in the public interest as contemplated in Section 38 of the Constitution of SA in that I contend that success in this application would better enable the State and the First Respondent [Zuma] to respect, protect, promote and fulfil the rights in the Bill of Rights as envisaged in Section (7) 2 of the Constitution.”

What prompted him to make the application, he says, was a call by Chief Justice Mogoeng Mogoeng on August 18, 2016 at the 17th SADC Lawyers Association Conference at the Cape Town International Convention Centre, where he had “emphasised the importance of the role which lawyers can play in weaning out corruption both in South Africa and on the African continent. I have also taken note of the comments made by the Constitutional Court that the Constitution is the primal source of the duty of the State to fight corruption.”

In 2015, Sooklal says he felt duty-bound to provide information he had to the Seriti Commission “which I thought would assist it in its deliberations”.

“I accordingly sent an e-mail to the Commission indicating my willingness to testify… I did not receive a response to the e-mail. I was disappointed because pertinent relevant information had not been placed before the Commission and also because I had not been given the opportunity to refute the allegations which had been made against me.”

He ends by telling the court that he believes that “the entire process in relation to the Arms Procurement Commission was tainted right from the beginning. The First Respondent [President Zuma] should have disclosed his conflict of interest which effectively would have precluded him from setting up a Commission of Inquiry and appointing commissioners thereto.”

Because of this, says Sooklal, the findings of the commission cannot stand.

Through deploying his until now apparently successful Stalingrad Strategy in delaying various court actions, President Jacob Zuma has now, in his hour of need, appeared to have backed himself into a legal corner where the net is tightening with each new application or affidavit filed. The law, as the president and the ANC have learned in several unsuccessful cases he and the party have brought or defended, has been our last line of defence.

Will the Arms Deal finally come back to haunt Zuma? We will have to wait until the Corruption Watch and R2K application is heard later this year. DM