Review: ‘No Longer Whispering To Power: The Story of Thuli Madonsela’ 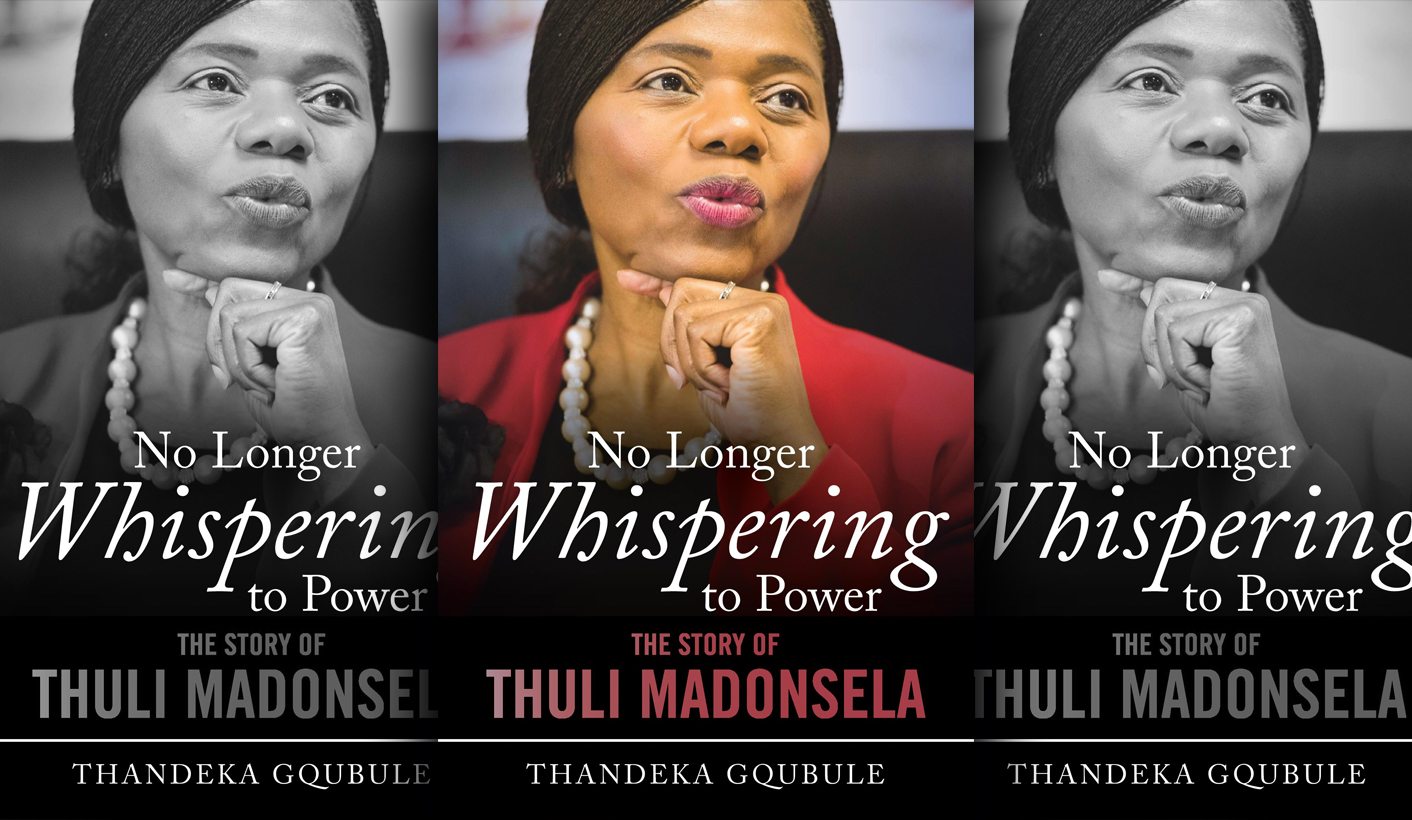 South Africa’s third Public Protector has not been out of office many months, but already Thuli Madonsela’s absence is being felt. The loss of her authoritative and somehow reassuring place in the public domain is significant. A new book on her tenure as Public Protector reminds us just how impactful a role Madonsela played in South African politics since 2009 – and how much courage it must have taken to stick to her path. By REBECCA DAVIS.

The story of Thuli Madonsela as Public Protector is, by definition, the story of South Africa’s recent history. Thandeka Gqubule’s No Longer Whispering to Power is a reminder of what a surreal roller coaster South African politics can be. For this reason, it is a sobering read: even being taken through events that we all know well, like the “scope creep” of Nkandla, leaves one a little breathless at the scale and brazenness of what President Jacob Zuma’s leadership has inflicted on the country.

But at the heart of the story are two women who should leave us with a greater sense of optimism about what South Africa is capable of producing. One is, obviously, Thuli Madonsela. The second is author Thandeka Gqubule, a journalist who was one of the “SABC 8” who stood up to growing censorship at the public broadcaster under Hlaudi Motsoeneng, and was suspended for doing so.

The two women have known each other for more than three decades. During the State of Emergency in Johannesburg in the mid-1980s, Madonsela was working as a unionist. At that time, Gqubule was held for a month in solitary confinement at the notorious John Vorster Square, after being betrayed by a white friend secretly working for the apartheid police. Madonsela was among the other activists arrested; she was detained without trial at Diepkloof Prison, where Gqubule would later join her. In prison, Madonsela is remembered as “a comforting presence, not easily disturbed by isolation and psychological pain”.

This was not always the case. The young Thuli Madonsela, we learn, was an awkward and anxious child, teased for having a “big head”. Madonsela and her six siblings grew up sleeping on the kitchen floor of a house in Soweto. She would go on to lose three of her siblings; one to suicide.

Madonsela’s mother was a domestic worker. Her father, who ran a mobile shop, was a strict patriarch who did not want young Thuli to wear trousers. He was also determined that she be a nurse, but Madonsela had other ideas. The volatility of Soweto in the 1970s led her parents to move Madonsela out of the country to be educated in Swaziland, at Evelyn Baring High School. It was in Swaziland that she would also pursue her undergraduate studies in law.

Madonsela and her political consciousness were a product of the United Democratic Front – which Gqubule describes as focused on grassroots social justice – rather than the African National Congress, characterised in the book as hierarchical, secretive, and top-down.

“Madonsela arguably continues the old UDF approach to the rights of the poor, the need to empower the weak, and the primacy of social justice, as well as the need to embody and own the democratic project in our daily praxis – at home, at work and in society in general.”

Gqubule further suggests that Madonsela’s particular approach to jurisprudence is steeped in Christian notions of dignity, and the communitarianism of African humanism.

Gqubule’s book is a reminder of how little we know about Thuli the person, as opposed to Thuli the Protector. Madonsela has served as a screen on which to project all the hopes of the nation: saviour, moral compass, future president. These fantasies are simplistic, but comforting. They are not disrupted by the book: its focus on Madonsela’s professional career rather than her personal life ensures that a more intimate grasp of Madonsela stays out of reach.

We do learn, though, that Madonsela likes wordplay and reading, and is a generous gift-giver to friends. Her first love vanished into exile, “never to be heard from again”. Madonsela also possesses a wry sense of humour; asked in a 2011 interview how she maintained her almost preternatural calm, she replied: “Try not to be hungry during the day.”

Madonsela must have followed her own advice to the letter, because during her time as Public Protector it was extremely rare to see her appearing as anything other than unruffled. This is despite the tremendous pressure she was under, including being the victim of significant attempts at intimidation.

A dead cat was thrown in front of her house. She was accused of being a spy for the CIA, Mossad and MI5, and of being a paid tool of the opposition. After the Constitutional Court ruling on Nkandla, it was reported that a local gang boss had been paid to carry out a hit on her, with instructions to make it look like a car accident. This warning led her to stop jogging in the mornings, but it certainly did not bring any respite to those in power with something to hide.

Madonsela characterised her role as the Makhadzi: the aunt who “serves as a buffer between the ruler and the people”. As it turned out, she was to be less a buffer to President Jacob Zuma than a major threat.

But Gqubule proposes that it is a mistake to think that Madonsela would have derived any satisfaction from the compiling of reports blowing the lid on failures of governance or constitutionality. Indeed, she suggests that the State of Capture report – laying bare the extent of the Gupta family’s influence on state affairs – was personally devastating for Madonsela to compile.

“Beyond the report’s minutiae – the text and phone records, the GPS location data – lay the horror of the age: the possibility that her life’s work lay in ruins,” writes Gqubule.

“Everything to which she had given her efforts – the dreams and visions of a just society – had failed. South Africa’s democratic project lay broken like a child’s toy right there before her eyes amid the documents on her desk. Before her was her nightmare: proof, as it were, of her own failure. A truly democratic South Africa now seemed like a mirage”.

Gqubule’s style is accessible but also surprisingly lyrical, drawing effectively on Xhosa idioms, local folklore and African literature. Indeed, one ends the book hungering for more of Gqubule’s personal story and insights. Her final chapter, in which she visits contemporary Soweto and contrasts memories of the past, is vivid and compelling.

“I leave office quite cynical about human beings,” Madonsela said in the last days of her tenure as Public Protector. But it is hard to be cynical about Madonsela herself. Edwin Cameron once said of Madonsela: “Hers is the story of someone who, given power, uses it only for the right and the good”. If only there were more of her kind. DM