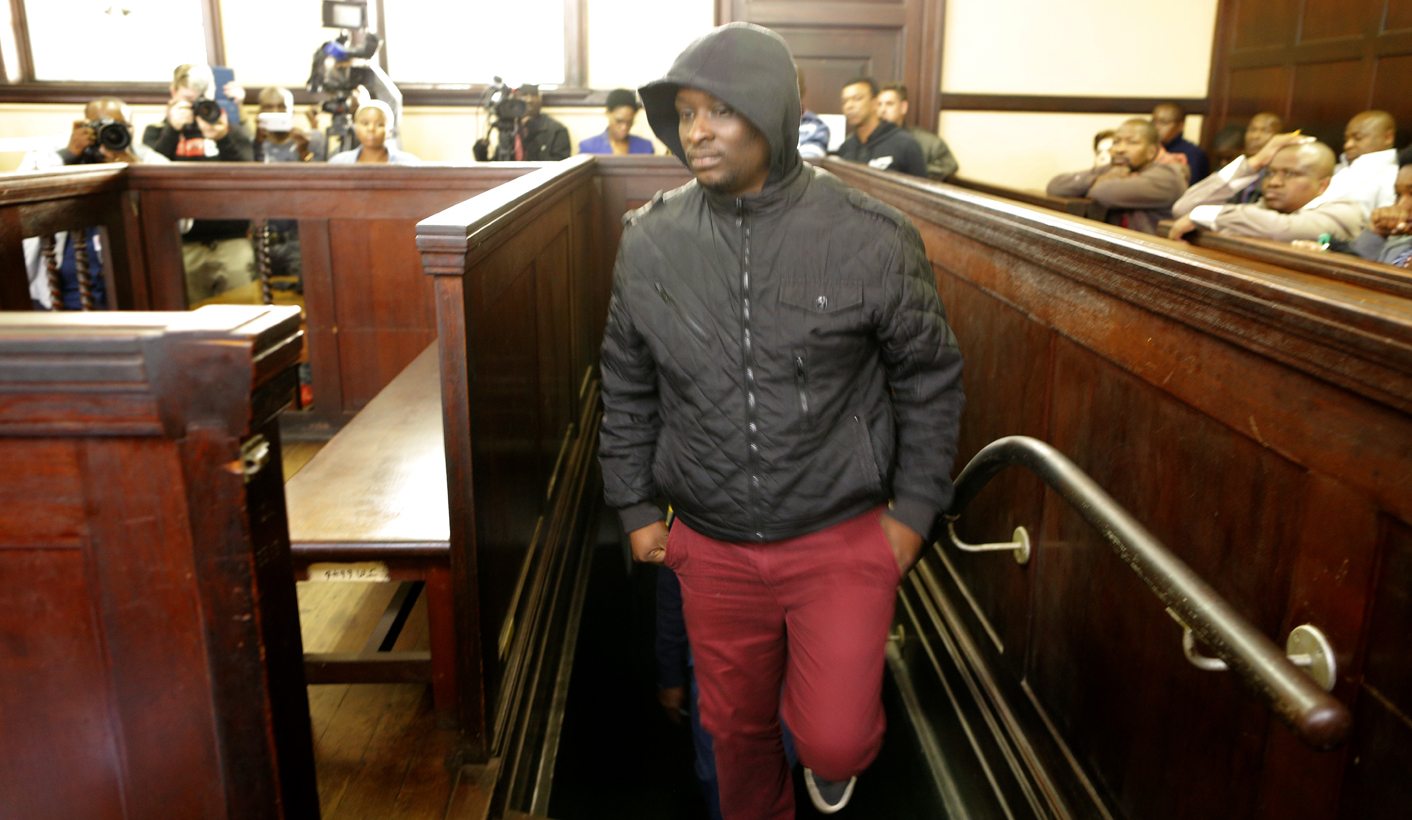 Elvis Ramosebudi’s charges have been lessened and there’s no evidence linking him to co-conspirators or planning a coup. The Hawks and the National Prosecuting Authority are under pressure to justify their positions, with increasing questions over the case’s legitimacy, but both agencies claim the facts will come out in court. By GREG NICOLSON.

In his second appearance in the Johannesburg Magistrate’s Court, 32-year-old Elvis Ramosebudi looked confident on Tuesday as he fist-bumped his new council, Advocate Motebang Ramaili. Charges against the man the Hawks claimed was a “coup plotter” were dropped from conspiracy to commit murder to incitement to commit murder as the bail hearing was postponed until Friday 5 May.

The Hawks arrested Ramosebudi last Wednesday and in a press statement alleged he attempted to solicit at least R140-million from businesses to assassinate prominent South Africans on both sides of the white minority capital debate with “undercover coup plot snipers”.

The Hawks labelled him a “suspected coup plotter”, alleged he was running a clandestine operation and said he would face conspiracy to commit murder “and other charges”. But Ramosebudi’s arrest and two appearances in court – he first appeared on Friday – have raised more questions than answers.

Ramosebudi is reported to have worked in the past as a security guard and the charges have left both his family and his neighbours shocked. A Twitter account reportedly used by the accused includes posts of his address and phone number as well as attempts to buy weapons. He is listed as a director of a number of defunct companies.

“There was certain stuff in the docket that raised question marks,” said prosecutor Advocate Johan Badenhorst on the state’s recommendation that Ramosebudi undergo psychiatric evaluation. Last week the court heard that Ramosebudi’s letters requesting millions be deposited into his private bank account to fund the assassinations were “not normal”.

Asked about the psychiatric evaluation, the defence’s Ramaili said the court should first deal with the bail hearing. “Honestly I don’t see any need for us to deal with that aspect.” Ramosebudi has confirmed he is unemployed and lives in Soshanguve. In his first court appearance he said he would apply for a lawyer to be appointed from Legal Aid. Ramaili did not make comments to the media, but confirmed he is not from Legal Aid and that Ramosebudi is a private client.

In an affidavit in July last year, Ramaili said he is a member of the Progressive Society of Advocates. He was the first applicant in a case against the president and justice minister trying to get the state to “address historical imbalances to achieve equity in advocate profession” and support transformation in the state’s legal briefings. The University of Witwatersrand SRC Twitter account said the “former student leader” offered legal assistance to detained students last year.

Outside court, National Prosecuting Authority (NPA) spokesperson Phindi Louw said the incitement charge best suits Ramosebudi’s case. Conspiracy charges require others to be involved in a crime, said Louw, but “for now he’s all alone”. She denied the state’s case was weak, claiming there was evidence that he tried to get a former Anglo American employee to assist him in committing a crime.

“If the incitement is to murder high-profile people then it will obviously be considered as a serious crime,” said Louw. She said the charges are based on Ramosebudi’s alleged incitement in trying to get a former Anglo American employee to donate money to fund assassinations. Ramosebudi allegedly wrote to mining magnate Nicky Oppenheimer requesting R60-million to fund the “Anti-State Capture Death Squad Alliance” to assassinate Zuma, the Gupta brothers, ministers such as Dudu Myeni, Des Van Rooyen, David Mahlobo, as well as leaders from Eskom, the ANC Youth League and the Umkhonto We Sizwe Military Veterans Association.

Ramosebudi is also accused of founding the “Anti-White Minority Capitalists Regime” and requesting tens of millions from the Guptas to assassinate Madonsela and others he claimed protected white business interests. Asked whether the Guptas would be involved in the case, Louw strangely referred to Ramosebudi’s potential psychiatric evaluation. The Hawks have said he wrote many similar letters requesting funds for assassinations he linked to resolving the country’s political crisis.

Attorney and legal analyst Tyrone Maseko on Tuesday questioned why the NPA would change the charge to incitement to commit murder, which he said was rarely used. He said incitement involves trying to get others to commit a crime that the accused may not ultimately be part of.

“It’s scaling back. Why are they even bothering with this?” asked Maseko. “Who is this guy inciting?” He compared it to charges against Economic Freedom Fighters leader Julius Malema for allegedly inciting violence by encouraging land invasions. “Clearly the people he is raising funds from are not going to be the gunmen,” said Maseko.

He speculated that the NPA changed the charge as no co-conspirators have been found, which means conspiracy charges can’t be justified. Given the legal difficulties, it might be better for the NPA to use incitement charges, even though there doesn’t appear to be anyone Ramosebudi incited to commit murder. Maseko, however, said the case was in its early stages and could change significantly.

The timing of the case and claims that Ramosebudi was a “coup plotter” have raised suspicions that the case is being used for political mileage. The Congress of the People (Cope) linked the issue to the “intelligence report” initially provided as a reason to fire former Finance Minister Pravin Gordhan. The report claimed Gordhan and Jonas were working to overthrow the state.

Jasmine Opperman, director of the Terrorism and Research Analysis Consortium, said the seriousness of the allegations can’t be underplayed, but it has been clear from the beginning that the accused was acting as an individual with his own motives and there was no evidence yet to back up claims that he was attempting a coup.

“It is clear the Hawks have overplayed the issue,” she said.

Head of the governance, crime and justice division at the Institute of Security Studies, Gareth Newham, said the Hawks should have known better than to hype up the situation. “I think the Hawks’ statement was completely inappropriate and they need to revise their communications with the public if they want to maintain public confidence,” he said. “The entire situation is completely far-fetched and they need to review their communications.”

Hawks spokesperson Brigadier Hangwani Mulaudzi said charges are now in the NPA’s hands, but the public should wait for evidence to be presented in court before judging the matter.

“Why are they questioning it?” he asked those who criticised the Hawks’ press statement. He called on them to offer any information they have to help the investigation. “It is our prerogative,” he said in the decision to release the statement.

“We are in the business of dealing with crime, no matter what people think,” said Mulaudzi. “We’re not into politics. We’re into dealing with crime.” He said Ramosebudi posed a threat the crime fighting unit had to deal with.

“They mustn’t question the integrity of the Hawks because here is a person making threats and if something is going to happen, who are they going to blame? It’s us, isn’t it?”

Although it appeared Ramosebudi was a “lone wolf”, Mulaudzi noted individuals who had carried out terrorist attacks in the UK and said it could also happen in South Africa.