Book Review: The Republic of Gupta – these are the days of kickbacks and plunder 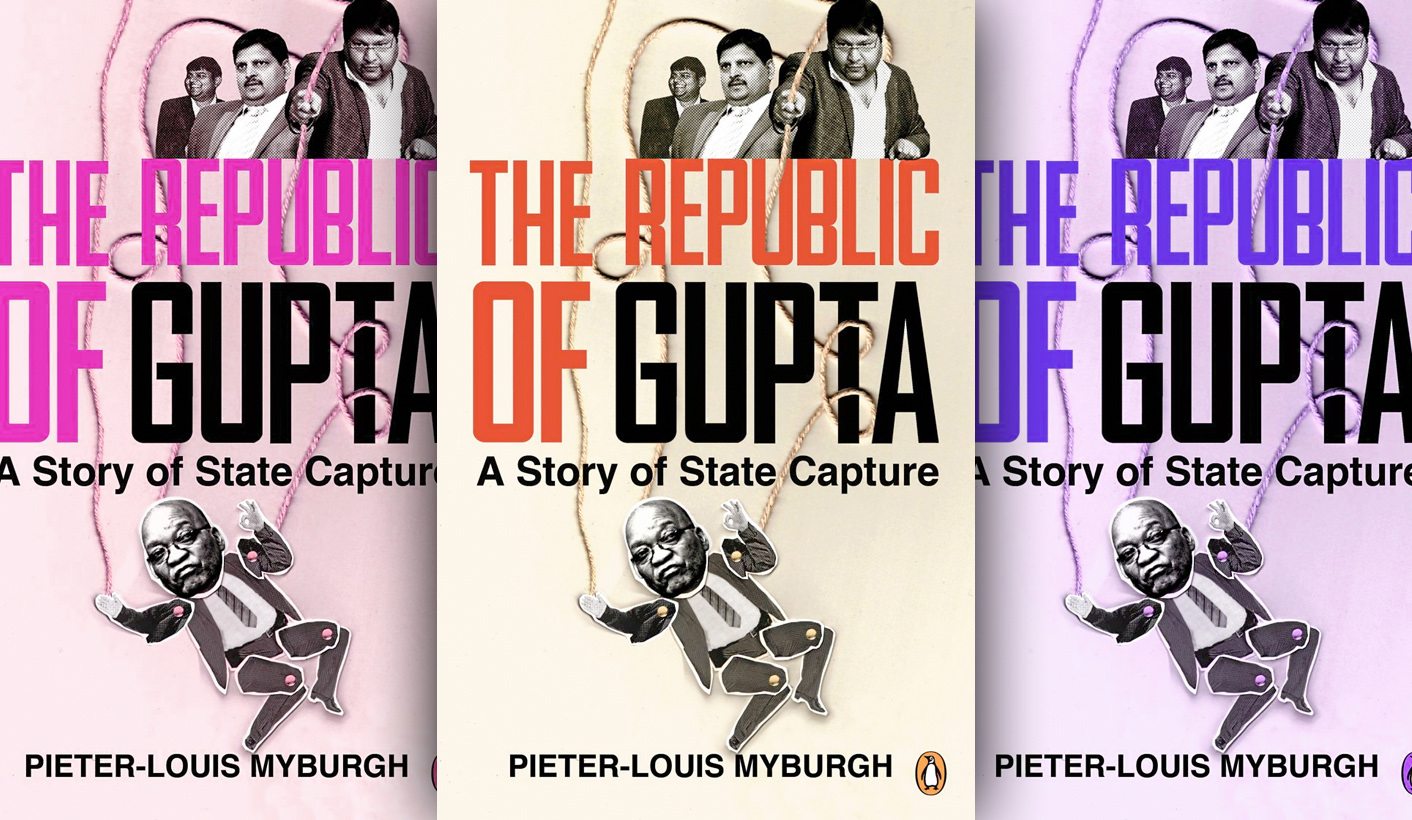 Hot off the press, investigative journalist Pieter-Louis Myburgh’s piecing together of the jagged pieces of the history of Atul Gupta’s remarkable rise from flea market shoe seller to being listed as the seventh richest person in South Africa, and worth around R10-billion, brings into harsh focus what can only be described as the biggest official heist by private interests of the post-apartheid South African state. Apart from the millions in public funds lost to citizens, it is also the story of corrupted ethics, greed and self-enrichment. Along the way many more than our President have been drawn into a ruinous web that will take decades to fix. By MARIANNE THAMM.

Those of us who are incorrigible news junkies are well aware of the shameful saga of the Gupta family, their role in the capture of the South African state and how President Jacob Zuma has acted as a facilitator and enabler for what can only be described as a soft coup of a democratic government by self-serving capitalists and rent-seekers.

It is this relationship that has, in the eight years that Jacob Zuma has been the president of the Republic of South Africa, been at the of a slow and deadly corrosion not only of the democratic state but also of the party Zuma currently leads – the ANC. The serious decline of the ANC – while the Arms Deal scandal certainly gauged at and wounded the heart of the party – can be traced back to the start of the parasitic relationship of the Gupta family with politically connected individuals in the party.

We are where we are now mostly because of this corrupting influence.

Today “state capture” and “Zupta” have entered daily political discourse, not as catchy slogans, but as matters of fact.

But so many, so deep and so wide have been the scandals over at least 13 years – beginning with an IT contract the Gupta family secured with the Gauteng government in 2001 – that holding on to a bigger picture is challenging even for the most avid follower of South African politics.

Those on the inside, including investigative journalists like Myburgh or those attached to amaBhungane and City Press, have burrowed and dug deep into the cesspit of corruption, nepotism and the abuse of state power and hold, in their minds, a clearer picture of the sprawling sordid canvas that includes Transnet, Prasa, Eskom, SAA and the Treasury itself.

What Myburgh’s book, titled The Republic Of Gupta – A Story of State Capture (published by Penguin) does is set out to capture, so to speak, in around 300 pages, a comprehensive narrative about the extent and the reach of the rot and the great cost, not only to the fiscus, but to our trust in the ruling party and the calibre of its leaders.

Myburgh, who was the recipient of the Taco Kuiper Award for Investigative Journalism for his series of exposés of massive corruption at Prasa, currently works for News24 and spent over a year researching and writing the book. He has drawn widely on reports published by colleagues as well as his own extensive research. The book concludes with the firing of Pravin Gordhan and Mcebisi Jonas as well as the great that is currently taking place within the ANC itself.

A note before you reading. Each time you reach an amount that was spent, either on disastrous tenders to provide the Gauteng education department with computers or any other deal touched by the Gupta family and their associates, write the figure down. At the end, tally up the cost. It is mind-blowing. The figure is so huge President Zuma would not be able to read it out loud.

What South Africa could have accomplished had these vast amounts not been stolen, plundered and gobbled up by those elected to serve the people, is impossible to imagine. With South Africa’s desperate levels of poverty and inequality, that we have lost so much through sheer greed, cunning, and self-interest, is devastating. And that our politicians, elected leaders and those entrusted with enforcing the law have stood by and in some cases aided and abetted it all is, quite frankly, treasonous.

Within days of publication of Myburgh’s book, former President Thabo Mbeki penned a letter to the media disputing a sentence in a chapter titled “Mbeki’s ‘secret’ council” that Mbeki had met with the Guptas and that he had been “close” to the family. Myburgh writes of “consultative council” or a “secretive think tank” which Mbeki says was actually a “focus group” that enabled him to stay in touch with the “views of the population at large”.

Mbeki takes issue with Myburgh’s assertion that Essop Pahad, who served as a minister in Mbeki’s presidency, and who is a former business partner of the Guptas, sought somehow to conceal Mbeki’s relationship with the controversial family.

But this is all very small potatoes in the larger scheme of things although it is not insignificant that Mbeki has sought to distance himself from the Guptas.

writes Myburgh, first met Atul Gupta during a visit to India in 1996 with Mbeki when he was then Deputy President along with FW De Klerk. It was a brief meeting to discuss investment and trade opportunities in the newly democratic South Africa.

In 2006 it was Pahad who had nominated Atul to serve on the board of the International Marketing Council of South Africa which had been established by Mbeki in 2000 to promote a positive image of South Africa.

The splitting of hairs here is whether the Gupta family was dragged into the heart of the ANC by Mbeki, who should then shoulder some blame for the damage they have exacted. But Mbeki’s is a minor role. In the end, it is Jacob Zuma and his children who were and are the Gupta family’s jewels in the crown.

The Guptas got their first step up into the lucrative world of government tenders through their Sahara computer company and an IT contract with the Gauteng government and its Online Schools Project. It was 2001 and then premier, Mbhazima Shilowa, announced a plan to provide some 2,400 schools in Gauteng with computer laboratories.

Ultimately, the Guptas’ Sahara Computers was one of six consortiums selected for the R500-million tender. Sahara was set to install computers at 110 schools.

“But despite the lofty ideals that accompanied the project’s launch phase (as the project was known) came to be seen as one of the province’s costliest failures,” writes Myburgh.

He writes that in 2013, after the Gauteng government had invested 11 years and R3-billion in taxpayers’ money, the entire GautengOnline project was scrapped, leaving the province’s poorest learners out of the technology loop.

From here the Guptas moved on to “capture” South African cricket and in this chapter Myburgh details how the family paid R25-million for the naming rights to Newlands, Port Elizabeth’s St George’s Park and Durban’s Kingsmead stadiums.

Piggy-backing on Sahara India Pariwar, a much older Indian-based conglomerate, and which had nothing to do with the Guptas’ local Sahara, the family appear to have strung along journalists and officials. Reading how the family brought in the services of cricket players like national cricket captain Graeme Smith is infuriating. Also, how the family paraded South Africa’s national team in their hometown like shiny new possessions.

It’s all in the book. How Zuma came to power and how Tokyo Sexwale, who was initially believed to have been on the Mbeki slate before Polokwane, turned into a Zuma supporter. Myburgh writes that it is easier with hindsight to distinguish the Gupta footprints in Zuma’s rise to power.

He mentions Sexwale as Exhibit A and proposes a theory that after Zuma’s political life had been unexpectedly revived by the decision in 2006 by Pietermaritzburg High Court judge Herbert Msimang to strike corruption charges from the roll, a sequence of events sheds light on the matter of Zuma’s rise.

“The previous day, 19 September, the Guptas’ Sahara Holdings had made a big announcement about significant changes to the group’s shareholding structure. Sexwale’s Mvelaphanda Holdings, which had been active mainly in the mining sector, and Lazarus Zim’s Afripalm Consortium, would each acquire a 12% stake in Sahara Holdings.”

Sexwale, who was at first viewed as supporter, had, in 2007, made it clear he intended to make himself available for the party’s top leadership at the upcoming December conference.

“But a few days before the conference was set to begin, Sexwale pulled out of the contest and threw his weight behind Zuma.” It was a move that was pivotal to Mbeki’s demise.

Myburgh’s book is packed with detail with regards to the key players and how deals went down in the Sishen iron ore saga to the Shiva Uranium deal (in anticipation of the Russian nuclear deal), Transnet (where dear Brian Molefe features), Eskom as well as Prasa.

There was a point at which it became clear that the Guptas were wielding far too much influence over the country’s politicians and leaders and it is in chapter 9, “Spooked”, that Myburgh details why Zuma got rid of in 2011 the SSA’s Moe Shaik, Jeff and Gibson Njenje when they warned that the family were a threat to state security.

As Myburgh’s book gallops towards more contemporary events, including the illegal landing of the Gupta wedding party at Waterkloof, revelations by Mcebisi Jonas, Vytjie Mentor, Barbara Hogan and Themba Maseko of Gupta family interference in the appointment of Cabinet ministers, the Public Protector’s State of Capture Report and then the hounding of Pravin Gordhan, you realise we have been on a bruising roller-coaster ride thanks to President Zuma and the Guptas and that has cost us dearly in so many ways.

This book comes at a time when we who were slowly boiling in the pot have suddenly come to understand just how much the heat has been turned up. Those who are implicated in the capture of the democratic state are not going to go quietly and ridding the ANC of Jacob Zuma will only be the start, as this book makes clear.

Most of the skeletons come dropping out of the closet here and rattle around exposed and jittery. It’s not as if we didn’t know, but reading it all contained in 300 pages is rattling in itself.

The only thing Myburgh has not been able to do is to quantify (over an above those amounts lost by SOEs in deals linked to the Guptas) exactly what amounts the Gupta family would have ultimately been able to amass from their politically connected dealings in South Africa over around 20 years.

Myburgh, while he where he cannot dig up conclusive proof, has, in this book, pulled the bigger picture of State Capture and how South Africa was sold off, piece by piece, into stark relief. The question at the end of it all is how the hell did we let this happen and how long will it take for us to if we ever will? And then the most pressing question. Will those who did this be called to account? That, we surmise, will be fodder for a whole new book. DM