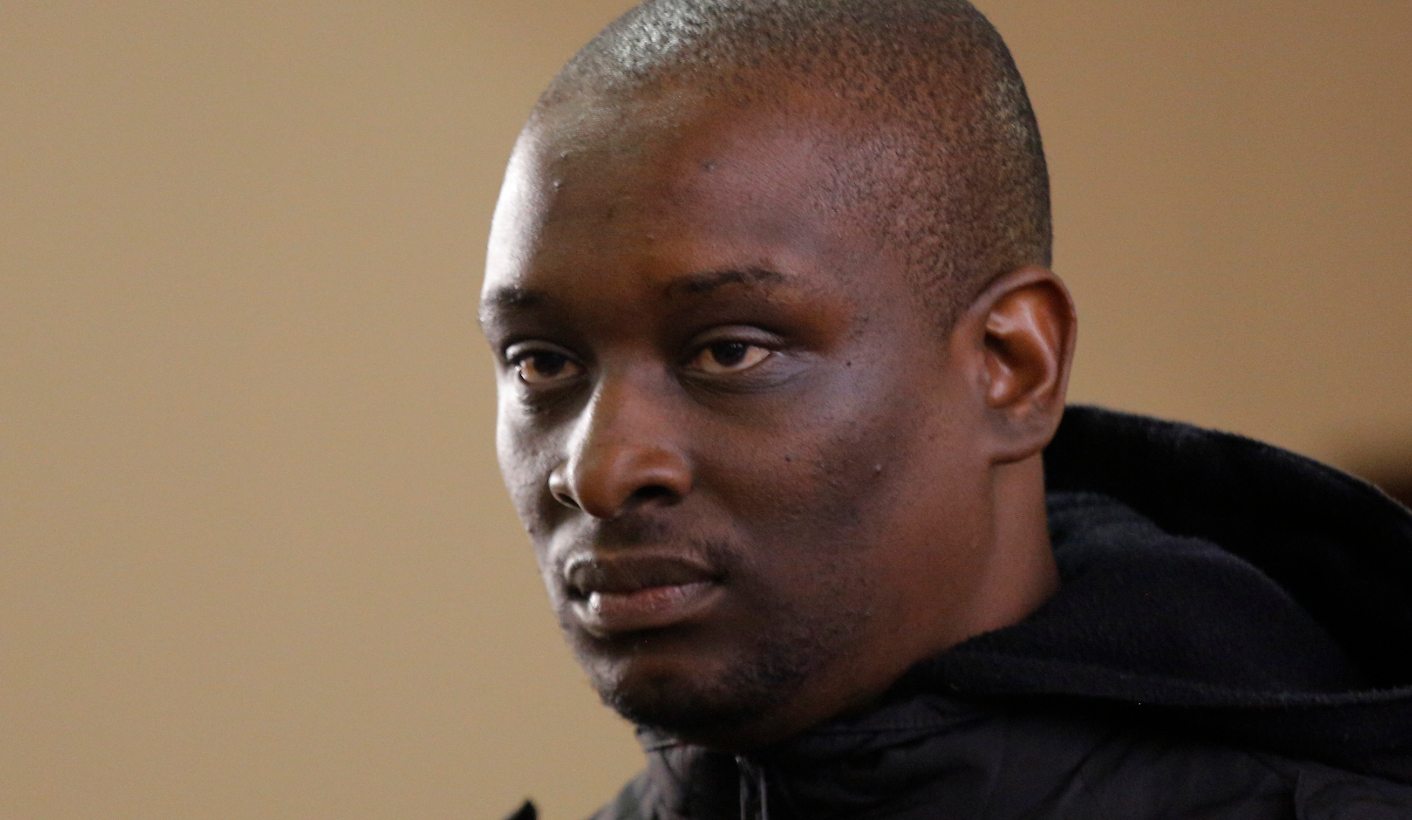 Elvis Ramosebudi, the “coup plotter” who allegedly planned to assassinate high-profile South Africans, appeared in the Johannesburg Magistrates Court on Friday. The state maintains it has a case, but the details only got more bizarre. By GREG NICOLSON.

Ramosebudi walked up the stairs into court, removing his black hoodie to face the media. The Hawks, who arrested the 32-year-old (initially reported as 23 years old), had promised details of the case would be revealed in court but prosecutor King Masimulla offered little information.

Ramosebudi has been charged with conspiracy to commit murder, “a very serious charge”, according to Magistrate Vincent Ratshibvumo, who presided over the bail hearing on Friday. The state opposed bail and requested more time for the Hawks to investigate. Ramosebudi will seek legal assistance from Legal Aid and plans to apply for bail. The hearing was postponed until 2 May.

“It will not be in the interests of justice at this stage for the court to grant bail,” said Masimulla. The National Prosecuting Authority (NPA) wants Ramosebudi to be taken for psychiatric evaluation. “It’s not normal for a person to commit such an offence using his own personal bank account and going around to companies,” said the prosecutor.

He questioned Ramosebudi’s mental health. Asked whether he had been admitted to a mental health institution in the past, Ramosebudi said, “I can’t recall.” He declined to make any other comments.

Ramosebudi is accused of offering to assassinate 23 people, but the prosecution on Friday did not name the targets. “I’m not in a position to disclose the names,” said Masimulla.

The Hawks said they arrested Ramosebudi on Wednesday in Midrand while he was explaining to donors how state capture beneficiaries would be assassinated “by undercover coup plot snipers”. The “donors” were undercover officers.

He is accused of founding the Anti-State Capture Death Squad Alliance, targeting 19 people, including members of Cabinet, state-owned entities and prominent South Africans. The Hawks said he had sent letters to companies seeking R140-million to fund his operation. He is also accused of leading the Anti-White Monopoly Capitals Regime and seeking funds to assassinate four senior government officials.

The 33-year-old is unemployed, he confirmed on Friday, and reportedly lives with his mother in Shoshanguve. “He believes he is the answer to the political situation in South Africa,” said Hawks spokesperson Brigadier Hangwani Mulaudzi.

In letters, Ramosebudi approached both sides of the white minority capital debate seeking funds to carry out assassinations. In a letter to mining mogul Nicky Oppenheimer, he said, “All South Africans, have long been protesting and struggling against Jacob Zuma bad governance, rampant corruption, state capture, economic meltdown, self-interest, fraud and failure to protect and uphold the constitution of the country.” The court confirmed that Oppenheimer’s Anglo-American is involved in the case.

Ramosebudi allegedly requested R60-million from Oppenheimer to assassinate , among others, President Jacob Zuma, Mineral Resources Minister Mosebenzi Zwane, businessman Fana Hlongwane, the president’s son Duduzane Zuma as well as the Gupta brothers. In the letter, his personal bank account is listed for the money to be deposited.

He also wrote to the Gupta family seeking tens of millions to assassinate former public protector Thuli Madonsela, former deputy finance minister Mcebisi Jonas and former finance minister Nhlanhla Nene. “The Gupta family has created employment opportunities for many black people since the dawn of freedom but white monopoly capitalists want to control the economy and prevent the Gupta family from creating more employment opportunities for the previously disadvantaged black people,” he wrote, according to Pretoria News.

“Those are not the only letters. There are lots of letters we picked up,” said Mulaudzi on Friday. Companies were contacting the Hawks asking them what is being done about the case.

The Hawks’ investigation is at a “very, very sensitive stage”, said Mulaudzi. “I can’t give you details but there’s a lot of information we managed to pick up on this guy.” He said the Hawks have learnt about his personal life and are assessing the evidence collected in a raid on Ramosebudi’s home. “There’s new information that also came through yesterday.”

Mulaudzi said the accused is a “sound guy, very clever”. “He’s never been to any institution unless it was underground. He’s a very sound person and didn’t show any abnormalities.”

The Hawks said they intercepted the communication in October 2016. “A search was conducted at the suspects’ home and evidentiary proof was confiscated for further investigations. It further transpired that there were other companies he solicited funds from using same modus operandi,” said Mulaudzi on Wednesday.

Outside court, NPA spokesperson Phindi Louw would not comment on the timing of the case or suspicion that the arrest of a “coup plotter” seeking funding from large corporates could be political fuel for factions in the state and ANC. She said, however, that “we don’t have such information” that the case is linked to terrorism or a coup and the NPA only decided to lay charges of conspiracy to murder.

Louw denied the case against Ramosebudi might embarrass the NPA. “It will not be a massive embarrassment,” she said. “As the state we believe we have a duty to protect the citizens of this country.” DM