Who wants to be a president? A dummy’s guide to the 2017 ANC leadership race 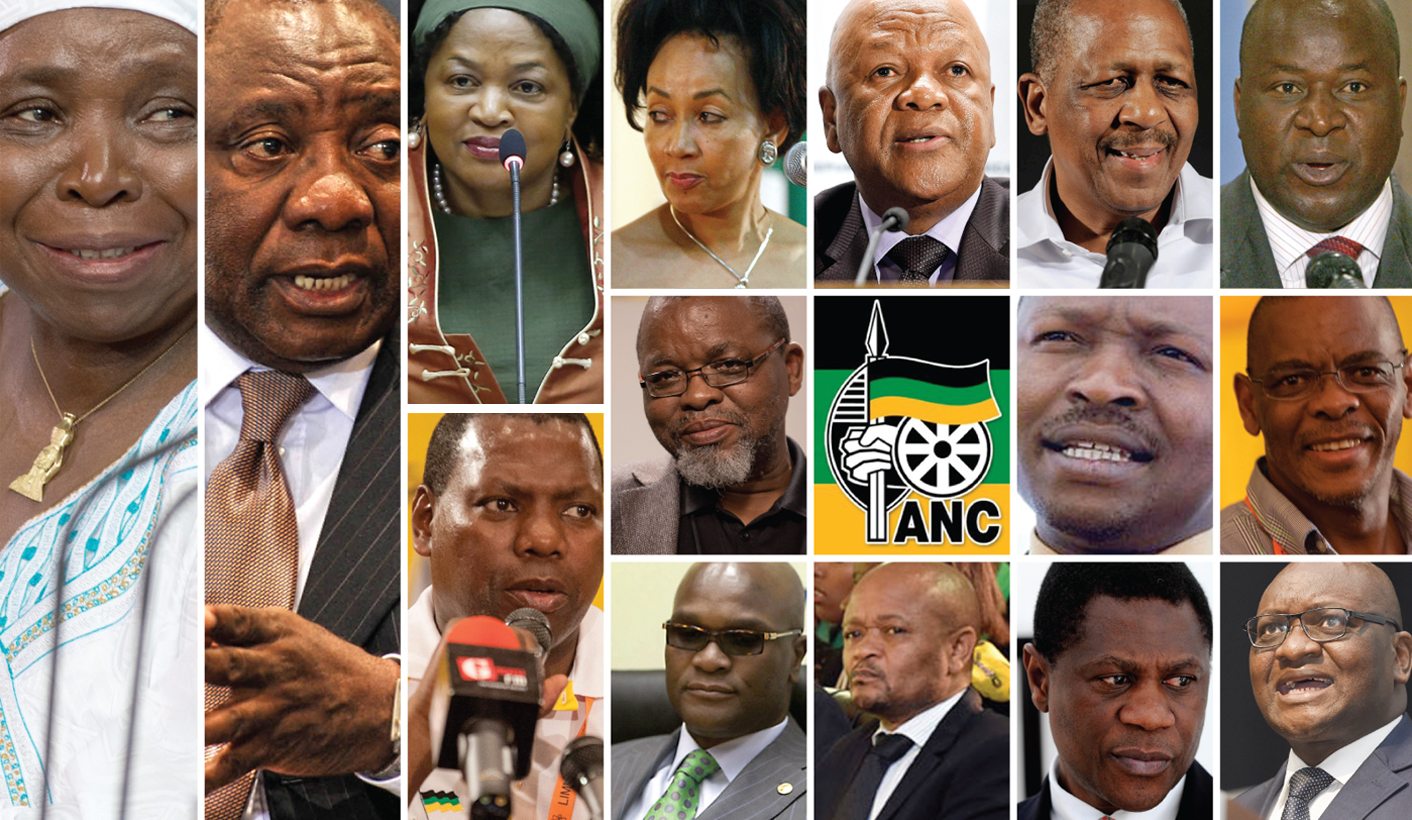 President Jacob Zuma is perturbed that so many people are competing for his job as ANC leader. “Where have you ever seen a situation where all of us want to become president?”, Zuma asked at an ANC event at Empangeni, KwaZulu-Natal at the weekend. He claimed this was due to foreign forces trying to take control of the ANC. There is a rather crowded field at present, though this is probably due to the multiple factions at play. It could also be a sign of healthy competition in the ANC. So who are the players and how do they line up? By RANJENI MUNUSAMY.

In 2007, a new phenomenon emerged in the ANC when competing factions went head to head for control of the party. For the first time in the ANC’s history, factions competed for the top six positions through slates. This led to the Zuma faction triumphing over former president Thabo Mbeki’s faction as delegates at the Polokwane conference voted along similar patterns for all six positions.

The slates were less pronounced at the 2012 Mangaung conference, with the “Forces for Change” – as the anti-Zuma camp was known then – unable to secure a fixed slate under the presidential contender Kgalema Motlanthe. But voting patterns were along factional lines for the top six and national executive committee (NEC) positions resulting in a walkover for the dominant Zuma camp.

The situation is a lot more complicated this year. There is now a proliferation of factions and, with eight months to go to the national conference, the race is wide open. A number of senior ANC leaders are either raising their hands or responding to approaches from party structures to make a play for the top post.

She is Zuma’s favoured candidate to succeed him and was first out the starting blocks when the ANC Women’s League announced in January they would be campaigning for her to be the first women leader. She is also backed by the dominant faction in KwaZulu-Natal, as well as the ANC Youth League in KwaZulu-Natal. But Dlamini-Zuma’s campaign is running into trouble with what is known as the “premier league” faction that has been in Zuma’s corner, as she is apparently unwilling to consider Mpumalanga Premier David Mabuza as her running mate and Free State Premier Ace Magashule for the position of secretary general on her slate. Mabuza and Magashule are the ANC chairpersons in their provinces.

There is in fact confusion amongst Zuma’s supporters about who Dlamini-Zuma is willing to work with. KwaZulu-Natal provincial chairperson Sihle Zikalala is said to have trouble selling a “unity slate” that has Dlamini-Zuma at the top of the ticket. Her speeches and campaign messaging has been extremely poor. Although she is campaigning on a gender ticket, she has not said anything of substance about how her presidency will benefit the lot of women in the ANC and the country. What counts in Dlamini-Zuma’s favour is that she has the backing of her former husband and his benefactors. For now. She is viewed as a Trojan horse for Zuma, his friends and family to remain in control of the ANC and the state.

The Deputy President’s campaign has been ignited by his speech in Uitenhage that set him up as the candidate who would challenge and expose the Zuma-Gupta throttlehold on the state and its institutions. By campaigning on an anti-corruption, anti-state capture ticket, he could have constituencies in society rallying behind him. He already has the support of Cosatu and the South African Communist Party (SACP). But what counts are ANC structures that would send voting delegates to the elective conference. Ramaphosa has a hard slog ahead to rustle up support in the provinces as he does not have a defined constituency. In order to be the “anti-corruption” candidate that can set the ANC on the path of rehabilitation, he has to fight a clean campaign – which might not be possible in an organisation contaminated by patronage and vote buying.

Mbete tried to get her campaign off the ground in January by announcing that she had been “approached by many” ANC structures to run for the presidency. She confirmed to the Sunday Times that she would run “after agonising for a long time”. But after the ANC placed a moratorium on campaigning, Mbete’s campaign seems to have spluttered to a halt. She had hoped that Zuma would back her, after he had said that it was time for a woman president. But with Zuma firmly behind his ex-wife, Mbete’s campaign appears to be doomed. He track record as Speaker of the National Assembly makes her a hard sell and other players who had initially considered being on her slate realise that she is dead wood.

For some time, Mkhize was the person Zuma trusted with his personal and political affairs. He played a central role in convincing Zuma to remove Des van Rooyen as finance minister and replacing him with Pravin Gordhan in December 2015 after Nhlanhla Nene was fired. Mkhize had a chance of being Zuma’s endorsed candidate. He was also seen a possible compromise candidate who could straddle the pro- and anti-Zuma camps. But his relationship became strained when he began speaking against the police harassment of Gordhan. Mkhize’s support in KwaZulu-Natal has also been shaky.

The final break with Zuma came when he, Ramaphosa and secretary general Gwede Mantashe opposed Zuma decision to fire Gordhan and Mcebisi Jonas on the basis of a bogus intelligence report. Mkhize was booed by ANC supporters at Ahmed Kathrada’s memorial service in Durban, and the ANC Youth League in the province has refused to apologise for this. He can therefore no longer count on his province, KwaZulu-Natal, consolidating behind him. He stands a better chance of securing another top six position on the Ramaphosa slate – perhaps secretary general.

Sisulu is a late player in the game but appears to have strong pockets of support. There are unconfirmed reports that half a million t-shirts with her campaign branding has been produced and being distributed – without her involvement. The Sisulu dynasty is a big plus and she is so far the only woman candidate in the anti-Zuma camp. She is allegedly facing threats for her stance and this could prove dangerous for her campaigners. Her best chance of success is probably to join forces with the Ramaphosa campaign.

Radebe has been in Cabinet since the Mandela administration but has not really been a star performer. His greatest achievement is not being involved in any major scandals. He is clearly out of favour with Zuma, having distanced himself from the president’s controversies, including the firing of Nene. As head of policy in the ANC and his seniority in government, Radebe is in line for a senior leadership position. He has certainly been patiently waiting for one. Radebe is not aligned to any of the factions and other than some party veterans, he does not seem to have widespread support for a top position.

The one person most unlikely to be elected ANC president is Gwede Mantashe. Although he appeared to be favoured by some Eastern Cape structures, it seems unlikely that a campaign could take shape now. Mantashe appears to be fed up with the skirmishes with Zuma and his camp. He constantly annoys structures, including his traditional constituency in Cosatu and the SACP, by lecturing them about what they ought to be doing and not doing. He denounces the practice of slates but his name regularly features on them. He was mentioned as a possible deputy to Ramaphosa but apparently favours the position of national chairperson.

He has been trying to compete for a senior leadership position since 1997. At that year’s conference in Mafikeng, he tried unsuccessfully to run against Zuma for the position of deputy president. He made it to the top six in 2007 by joining the Zuma slate as treasurer general but the relationship could not stick. In 2012 he thought he had a shot at the deputy presidency again. Ramaphosa received 3018 votes while Phosa received 470 votes. The third candidate in the race Tokyo Sexwale received 463 votes. Sexwale has packed in his ambitions but Phosa remains a perennial candidate, this time for the presidency. He has been outspoken on corruption and the decline of the ANC but does not appear to have any significant support in the party. His chief campaigner is “poo protestor” and leader of the Ses’khona People’s Movement, Andile Lili.

The former Reserve Bank Governor is an outspoken member of the NEC and a keen tweeter. That is as much as he has going for him. He, like several other people, has been courted by party veterans to run for high office. He is seen to be close to Mbeki and is credited to be part of the team of people who ensured the best performance of the economy during their time in the driving seat. He does not have any constituency to speak of but does have 177,000 followers on Twitter and hip hop artist Casper Nyovest released a single called “Tito Mboweni” last month.

David Mabuza wants to be deputy president – to whoever will have him. He has been trying to unify his province behind his candidacy and is trying to shake off the premier league tag. He has been reaching out to people from other factions to ensure that he is in a strong bargaining position to make deals with other provinces to trade off other positions in the top six and the NEC.

Ace Magashule is the longest serving provincial chairperson and believes it is time to leave the Free State for a national post. He is haunted by controversy and scandal but that does not appear to get in the way of his ambitions. He is up for whatever top six post he can secure.

Paul Mashatile made an unsuccessful attempt to secure the position of national treasurer in Mangaung but lost to Mkhize. The Gauteng province believes that he needs to be in a top six position but some other players and strategists believe that his provincial deputy David Makhura stands a better chance of securing the position of secretary general. Mashatile’s strength is that he is outspoken and a dealmaker. However, he was badly burnt at Mangaung and unless he plays his cards properly, could end up paying the price again.

Senzo Mchunu: The former provincial chairperson of KwaZulu-Natal could make a comeback on an anti-Zuma slate. He has strong support in the losing faction in KwaZulu-Natal and is favoured by some national leaders as a potential candidate for the position of secretary general or deputy secretary general. He could emerge as a significant player this year because for the first time KwaZulu-Natal, the biggest province, is not united around candidates for the top six or the NEC.

Nathi Mthethwa: He is apparently the new Zweli Mkhize – enjoying favour and the trust of the president. His name has been mentioned on the Dlamini-Zuma slate for one of the top six positions. Zuma needs a hatchet man in Luthuli House and Mthethwa appears to be it.

The Outside Candidate: Jacob Zuma.

Yes, he could technically be re-elected as ANC president.