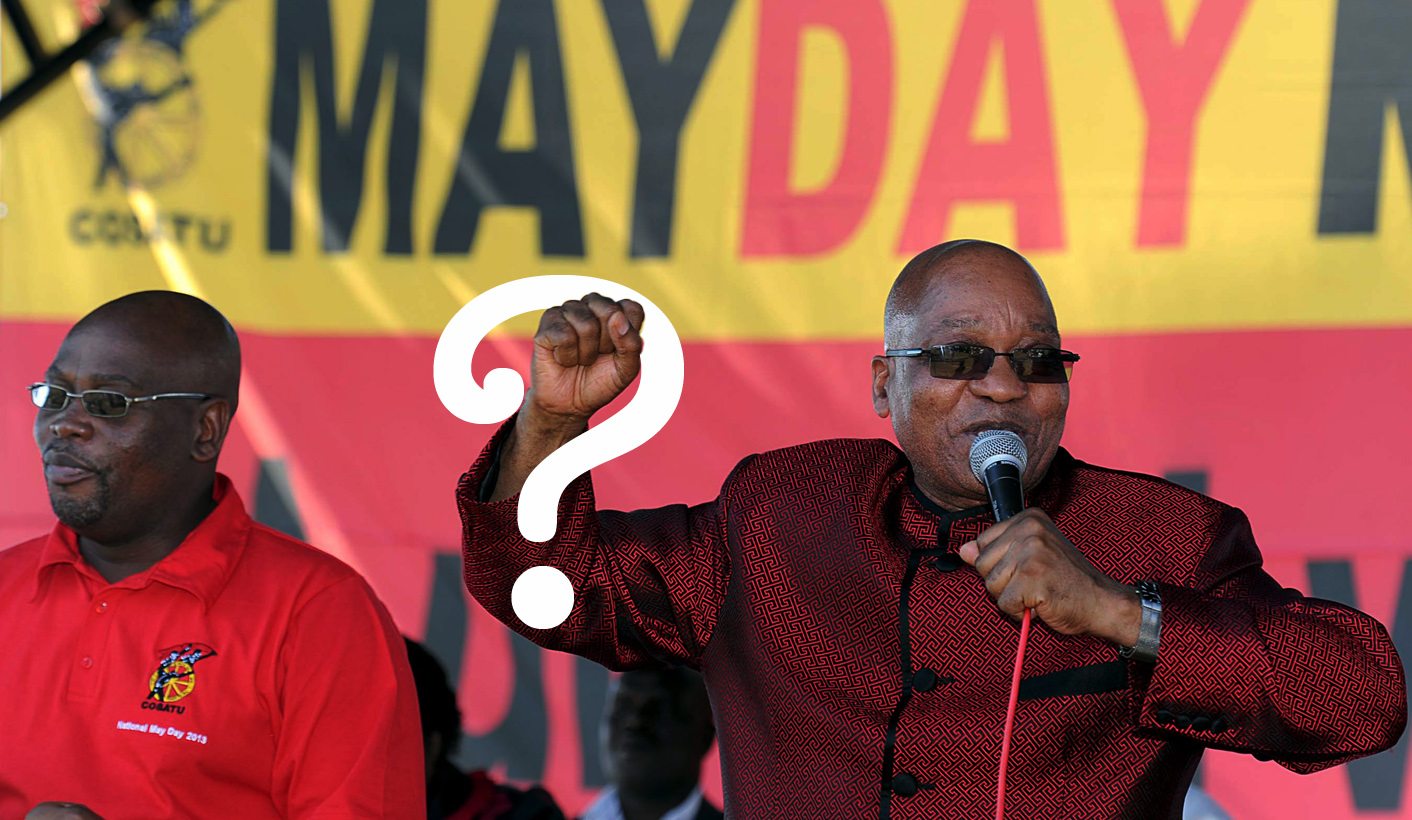 Two weeks ago, ANC-alliance partner, Cosatu announced that it had lost confidence in President Jacob Zuma and he should be recalled. They also decided against attending the president's 75th  birthday celebrations in Kliptown, Soweto. Now if two of its affiliated unions have their way, Zuma will not be addressing the organisation's main May Day rally in Bloemfontein on Monday and if he does, he is likely to find himself addressing a hostile crowd. By JILLIAN GREEN.

Tradition has it that the May Day event attended by Cosatu’s president would be the one to which the ANC president would be deployed. So when Cosatu invited its alliance partner to deploy ANC members to attend and address its rallies around the country, it was no surprise that President Jacob Zuma was deployed to the main event at Loch Logan Park in Bloemfontein, where Cosatu President Sidumo Dlamini would be present.

But if two of Cosatu’s affiliates, the National Education, Health and Allied Workers’ Union (Nehawu) and the Communication Workers Union (CWU) have their way the tradition may be broken this year.

In two separate letters the unions have written to Cosatu General Secretary Bheki Ntshalintshali expressing their unhappiness that Zuma is scheduled to address the National May Day rally. Both have requested that Zuma be replaced by another “eligible leader” of the ANC.

In a letter dated April 21, Nehawu, Cosatu’s biggest affiliate, through its General Secretary Bereng Soke wrote: “We request the national office bearers (of Cosatu) to look into this matter and inform the ANC that comrade Zuma must be replaced by another eligible leader of the ANC, particularly the deputy president as the main speaker in the main rally”.

It said that inviting Zuma to address any of the rallies after it had taken a decision that he was “no longer the right person to unite and lead the movement, the alliance and the country”  would send conflicting messages to its members, workers and the general public and “intensify existing instability within the movement”.

Cosatu’s Central Executive Committee (CEC) has taken a decision that Zuma should step down as the organisation had lost confidence in him.

Responding to Nehawu’s letter, Cosatu said that the special CEC had decided, among other things, that its alliance partners should deploy their leaders to Cosatu May Day celebrations:

Ntshalintshali said in response to reports that workers wanted clarity on why Zuma would be allowed to address the rally when the CEC had declared that it had no confidence in him, the federation’s national office bearers’ understanding was that “President Zuma as State President should step down but that as ANC president he should be allowed to attend Cosatu activities”.

In the April 24 letter, affiliates were urged to advise Cosatu on their understanding of the Special CEC’s decision, its interpretation and implications.

The unions want deputy president Cyril Ramaphosa to address the main rally instead.

But ANC secretary general Gwede Mantashe said Cosatu had not communicated any issues over its deployees to the party.

“According to our culture and tradition, Cosatu invites the ANC to deploy members to its rallies. The ANC decides which members to deploy where, which through long standing traditions sees the ANC president being deployed to the same event as the Cosatu president”.

Mantashe said any issues being raised over its deployees were being done so through the media, “Cosatu has not communicated with the us”.

Asked whether the ANC would change where its leaders were deployed as a result of calls from Nehawu and the CWU, Mantashe said these unions were not its alliance partners, Cosatu was, and it had not raised any issues with the ANC.

If the ANC goes ahead with its current deployment – which would see Zuma share a stage with two alliance partners that are calling for him to step down – it could lead to violence between members of the different trade unions attending the event, said political analyst Professor Shadrack Gutto.

“Cosatu, the ANC, and President Zuma have to weigh up whether that risk is worth it. The ANC is facing a serious crisis of legitimacy and making the wrong decision now will affect the party going forward,” Gutto said, adding that the ANC was no longer the ANC that Zuma said would govern until Jesus comes.

Zuma has fallen out of favour with Cosatu following his midnight cabinet reshuffle that saw him fire Finance minister Pravin Gordhan, his deputy Mcebisi Jonas and five other ministers. Alliance partners Cosatu and the SACP had not been consulted before Zuma announced the changes.

The reshuffle resulted in two rating agencies downgrading the country to junk status.

Two weeks ago, Cosatu decided against attending Zuma’s birthday celebrations in Kliptown but its president, Dlamini, seen to be sympathetic towards Zuma, attended the event.

Attempts by the Daily Maverick to get comment from Cosatu’s Ntshalintshali and Dlamini were unsuccessful. DM