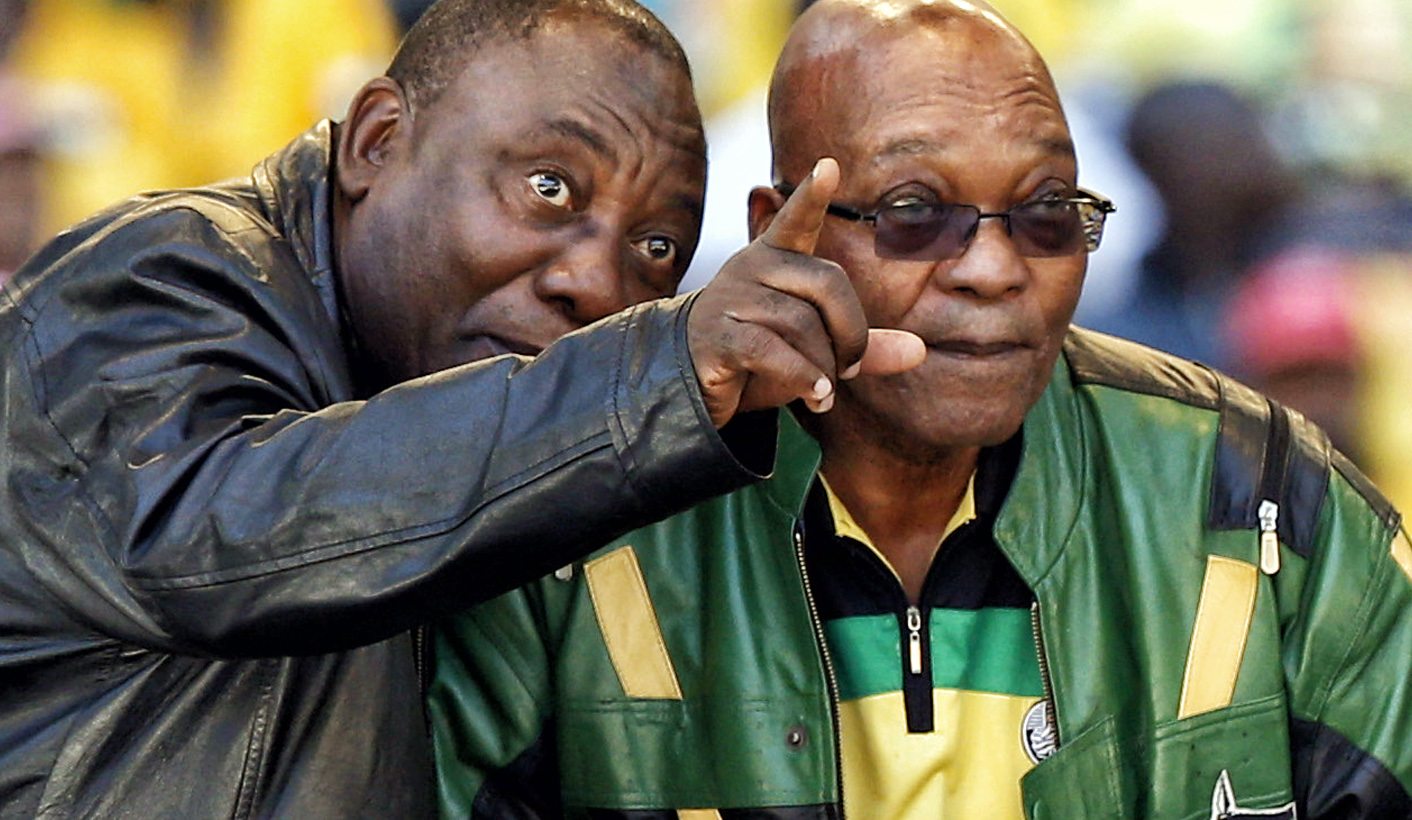 Deputy President Cyril Ramaphosa has finally ripped off his muzzle, pitching state capture, “the demon of corruption” and patronage as the main targets of his campaign for leadership of the ANC. Addressing a Chris Hani memorial lecture in Uitenhage in the Eastern Cape, Ramaphosa repeated his criticism of President Jacob Zuma’s recent Cabinet reshuffle and came out in support of a judicial commission of inquiry into state capture. With Zuma and his preferred successor Nkosazana Dlamini-Zuma having had a free run of the field, the launch of Ramaphosa’s campaign opens the fight back campaign for control of the ANC. By RANJENI MUNUSAMY.

Had Cyril Ramaphosa waited until July to kick his campaign into motion, he would have missed the opportunity to harness the growing anger and restlessness in the ANC, the alliance and society. The ANC has barred campaigning until after its mid-year policy conference. But the events of the past month, with Zuma firing the minister and deputy minister of finance two days after Ahmed Kathrada’s death and triggering two credit ratings downgrades to junk status, has led to unprecedented public anger and a backlash from the alliance.

Mass protests and calls for Zuma to step down, including from the South African Communist Party (SACP) and Cosatu, has led to agitation in that is increasingly difficult for the ANC to ignore. Zuma and his supporters are doing what they always do – playing for time so that the anger can dissipate.

Had Ramaphosa waited, not only would Dlamini-Zuma and her supporters continued to exploit the lack of competition, it would have demoralised his backers and perpetuated the belief that Zuma is invincible.

The planets were lined up for Ramaphosa at Sunday’s Hani memorial lecture in Uitenhage. This was an SACP event in memory of a heroic leader who stood up to the ANC leadership when it was difficult to do so. Ramaphosa was billed to speak alongside Mcebisi Jonas, the man who broke open the state capture revelations against the Guptas and one of the two most prominent victims of Zuma’s reshuffle. Jonas is largely popular in the Eastern Cape and the combination of the two of them on the same platform was bound to draw a big crowd, as well as a significant television audience.

With KwaZulu-Natal, the Free State, Mpumalanga and the North West usurped by the “premier league” faction that is backing Dlamini-Zuma, Ramaphosa needs a big province to rally behind him. The Eastern Cape is certainly in contention, with ANC structures in the province considering Gwede Mantashe, Baleka Mbete and, most recently, Lindiwe Sisulu as their candidate for leadership. Ramaphosa needed to give the Eastern Cape and every other available constituency in the ANC reason to back him.

There were fears that he would follow the same formula as former president Kgalema Motlanthe when he only entered the 2012 presidential race a few weeks before the ANC national conference. Motlanthe simply went through the motions and was not up for the fight.

Sunday was Ramaphosa’s moment to show that he is up to the fight.

The audience was clearly hostile to Zuma and sang in praise of Ramaphosa. Jonas lined things up for him in his speech on the current “political moment”. He condemned those (read Zuma) who dismissed the protest marches as “racist”.

“Remember that during apartheid when many of us took to the streets against the system, the government said to us that we were influenced by Russia, by the West, etcetera. They treated us as if we couldn’t think; couldn’t see what was happening. Today we hear the same rhetoric,” Jonas said.

“We are facing a coup, via the very capture of our state. Our country is being stolen before our own eyes. This is not to deny that corruption is widespread at all levels and therefore undermines development, but we must differentiate the two.

“South Africa faces a much greater threat in the sense that state capture occurs when the rule-making process itself is captured,” Jonas said. He called for a “popular front” to “recapture our democracy”.

If Ramaphosa had wimped out after that, his supporters would never have forgiven him. He did not disappoint, saying everything he could possibly have said without being in violation of any ANC rules and decisions. This was not a formal announcement that he is running for the position of ANC president. It was a clear signal that he would be the candidate to challenge Zuma’s faction and take on the Gupta contagion.

He said while some people contested the use of the words “crisis” and “rot” to describe the current situation, the “undeniable reality” was that the democratic movement is undergoing a period of great turbulence and uncertainty.

“There is a crisis,” Ramaphosa said, which directly contradicts Zuma and his supporters such as deputy secretary general Jessie Duarte, who have repeatedly challenged the use of the term.

“Recent political developments have thrown into sharp relief the divisions within our movement and brought to the fore broader grievances about the direction of the country. The manner and form of the cabinet reshuffle a few weeks ago heightened tensions within the movement, causing some comrades to engage in bitter exchanges in public statements and on social media.”

Ramaphosa decried patronage, factionalism, vote-buying and gatekeeping in the ANC.

“The problem is money. Money has come between us.”

On Thursday, Zuma attended a controversial prayer service hosted by the Guptas at the National Museum of Military History in Saxonwold. By doing so, it is clear that the president disdainful of the criticism of his relationship with the family and is prepared to flaunt his association with them.

Without mentioning the Guptas by name, Ramaphosa referred to the allegations against them.

“The allegations that there are private individuals who exercise undue influence over state appointments and procurement decisions should be a matter of grave concern to the movement. These practices threaten the integrity of the state, undermine our economic progress and diminish our ability to change the lives of the poor,” Ramaphosa said.

“It is, therefore, critical that the allegations of state capture are put to rest, that wrongdoing is exposed and that illicit practices are brought to an end. The ANC should support the establishment of an effective, credible mechanism to investigate these claims.”

Going off script, Ramaphosa said: “We know there is an elephant in the room, but we don’t want to talk about it.”

“I support a judicial commission of inquiry. It is possibly the only process that will be able to get to the bottom of these allegations and determine the truthfulness or lack thereof,” he said.

This is no ordinary statement.

A judicial commission of inquiry was the remedial action proposed by Zuma’s nemesis, former public protector Thuli Madonsela, in her “State of Capture” report. The president, who is implicated in this report, has taken it on review. Madonsela proposed that the Chief Justice appoint the judge who presides over the inquiry, which Zuma also feels is an affront to him.

But it goes further. The ANC national executive committee (NEC) initially mandated the office of the secretary-general to investigate the allegations of state capture after Jonas and others revealed the improper approaches made to them by the Guptas. Zuma and his supporters then managed to strong-arm the NEC to shut down that investigation, leaving the allegations hanging.

Ramaphosa’s unexpected call for a judicial commission, which the SACP has been lobbying for, re-opens the discussion. During his speech, he also joked about Jonas probably being fired because he turned down the money and position offered to him.

The offer to Jonas was made by the Guptas. He was fired by Zuma. Ramaphosa is publicly making the link of an improper relationship between Zuma and the Guptas.

Ramaphosa wound down his speech warning his party about the inherent danger of them losing power. He said those who were now marching against the ANC represented important constituencies that they should be engaging to bring about change.

“The ANC was an effective mobiliser… Today those forces that were with us are being mobilised against us. That can’t be correct. We seem to be pushing many important constituencies away from us. Now we have the uncomfortable situation where a broad front is consolidating against us. Why have people turned against us?”

For the first time, Ramaphosa is putting clear distance between him and the president. His statements and the unofficial launch of his campaign are bound to draw a counterattack from the Zuma camp in the coming days. Until now, the premier league leaders, the ANC Youth League, ANC Women’s League, and Umkhonto we Sizwe Military Veterans Association have not been able to attack him directly as he had not said or done anything to show he would be messing with their plans to anoint Zuma’s successor.

Now he has and the dogs of war will be set on him.

All Ramaphosa need do is not backtrack. There is bound to be a major fight when the NEC meets in May – and possibly at the national working committee meetings before them. If Ramaphosa is able to hold the line, his supporters will be able to run his campaign on the ground.

But Ramaphosa probably knows what he is in for judging by the quote from Hani he chose to end his speech with:

And that, essentially, was the choice: to preserve himself or be president. On Sunday, Cyril Ramaphosa decided to run for president. DM