Analysis: The Gospel According To Angus Buchan 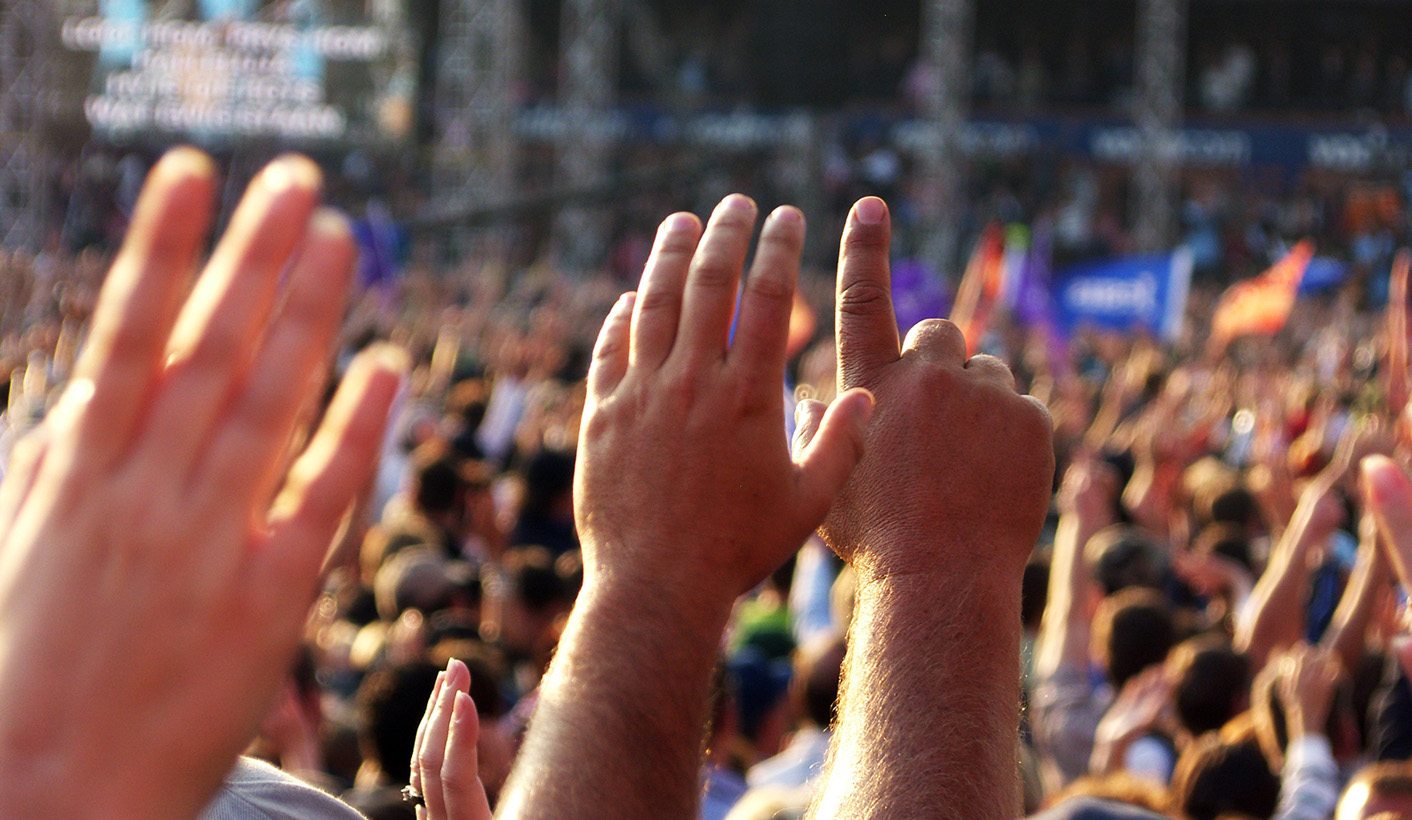 One of the most powerful white men in South Africa is neither a politician nor a businessman. He is an evangelist called Angus Buchan, and at the weekend he proved capable of drawing a crowd of almost a million people to a prayer gathering outside Bloemfontein. Among those who joined Buchan in praying for a “Christian government” were the leaders of the Democratic Alliance and the African Christian Democratic Party. What does Buchan’s popularity tell us about the time we live in? By REBECCA DAVIS.

Move over, Save South Africa. Move over, Cosatu. Move over, the EFF, the DA and the ANC. None of these bodies has been able to do what Angus Buchan did on Saturday: assemble close to a million people to ask for change in South Africa.

“Cancel every other meeting and make sure you are there,” read the event advertisement on Buchan’s website. “I really believe this is the last chance that we will have in South Africa to bring normality back to this beloved nation.”

It took six weeks to organise the event, which was held at a farm just outside Bloemfontein owned by former Springbok rugby player Ollie le Roux. Buchan had dubbed the gathering “It’s Time”, and was spurred to organise it by a video message he received from a supporter pleading with him to save South Africa.

After reportedly touching down in a private plane, the evangelist spoke for only five minutes, and avoided targeting government leadership by name. What “saving South Africa” looks like in Buchan’s book, it emerged, is bringing more God into government.

“I look forward to the day Parliament begins every morning with the reading of scripture and prayer, because that is what South Africa needs,” Buchan told the crowd. “This is not a political change. This is a Jesus change, because we need a Christian government.”

Buchan continued: “[God] has found a people willing to stand up and say, Sir, not in my country.” He then led them in a pledge to “stand up for truth and righteousness”.

In attendance was DA leader Mmusi Maimane. DA Free State leader Patricia Kopane told the Bloemfontein Courant: “He is there to represent the Democratic Alliance… Although we are facing a crisis we have all decided to put our differences aside and come together to be united.”

The notion that Buchan stands for unity, however, is one that is worth examining more closely.

Buchan – Oom Angus to his followers – will be 70 this year. In his book Faith Like Potatoes, he explains how he was first called to God as a child in Bulawayo, while watching a Billy Graham (the American evangelist) film at a local cinema.

Since finding religion once more as an adult, Buchan has built his Shalom Ministries into an impressive empire. He told BizNews last week: “I’m on TV every single day of the week. I do 10 programs a week, that’s 40 programs a month. I’m preaching full-out. I’m doing columns for Farmer’s Weekly, Landbouweekblad, Vision…I’m still writing books. I’ve written over 35 books.”

In his videos, Buchan has the air of a bluff, straight-talking farmer. He wears jeans and cowboy belts. His is a simple theology built on hope of the afterlife, and faith in God answering prayers. He takes the Bible literally, and is dismissive of an intellectual approach to religion. This is one of the keys to his success: research carried out among his supporters has revealed a fatigue with dry, difficult sermons from the NG Kerk in particular.

Buchan’s support base has traditionally been white and male. Building his mythology within this group has been his Mighty Men gatherings, which are camps for men with the stated purpose to “restore masculinity”. In 2010, it was reported that more men attended the gathering than the total number of visitors to the World Cup in South Africa that year.

Buchan’s views on gender are based on what he sees as the roles for men and women that God intended. He believes that women who do not submit to their husbands “are going against the Word of God”. In 2004, he wrote: “It is very hard for a husband to love his wife when she insists on wearing the trousers and refusing to submit. The children become traumatised when the wife belittles the so-called head of the house, or he beats up his wife because she will not submit.”

These views appear to have found particular traction among white men in South Africa. A 2012 thesis by Neil Vels proposes: “Buchan’s message meets the needs of the people he is speaking to: mainly white, Afrikaner farmers who are threatened by a loss of meaning in a postmodern, postcolonial – and post-liberation – South Africa”.

One account of a Buchan gathering held at FNB Stadium in Soweto last year estimated the majority of the audience as “40-something, well-dressed whites who looked like they were doing all right income wise”. A 2012 report on Buchan’s Mighty Men gatherings estimated his attendees as 80% white men.

Professor Johan Malan went so far as to suggest in a 2010 paper that Buchan’s followers may believe on some level that he can secure them political autonomy.

“The fact that so many people stream to the meetings of Angus is proof of the lack of leadership which the whites in South Africa experience in both the political and religious fields,” Malan wrote. “They are looking for somebody to come and lead the Boers…[Afrikaans seer] Prophet van Rensburg has referred to a leader who would lead the Boers to a Boer state where they can be free from domination by the blacks. Could this perhaps be the reason for the popularity that Angus enjoys?”

In the past, Buchan has said that Christians “joining hands with Islam and with Buddhism and Hinduism” amounts to “an abomination to God”. Buchan told Carte Blanche in 2008: “You can’t sleep with your girlfriend before marriage, and abortion is legalised murder. Homosexuality is against the word of God.”

Last year Buchan was banned from preaching at venues in Scotland as a result of his belief that homosexuality can be cured with prayer. Chair of the Scottish Borders LGBT Equality organisation Susan Hart was quoted as saying: “Buchan’s views that LGBTI people are diseased and can be cured, and that men should dominate women and physically punish children in the family unit, are extremely damaging”.

When one familiarises oneself with Buchan’s views, one starts to wonder what exactly he means when calling for prayer to bring “normality back to this beloved nation”. Given that so many of Buchan’s views are blatantly unconstitutional, moreover – including Saturday’s call for a “Christian government” – one would also hope that South Africa’s politicians would exercise some discretion in choosing whether or not to endorse his events.

Perhaps it is worth saying, too, that more Christianity is unlikely to save South Africa’s government. After all, the man at the centre of the ANC’s current leadership turmoil – President Jacob Zuma – is a self-professed devout Christian who spearheaded the “moral regeneration movement” over a decade ago.

Beyond this, though, what the massive turnout on Saturday suggests is a degree of hopelessness among South Africans. With the apparent failure of both the democratic process and state institutions to hold the executive to account, little wonder that many are now choosing to entrust their memorandum of demands to God rather than Parliament. DM