Philip Kgosana: The meaning of his courage today 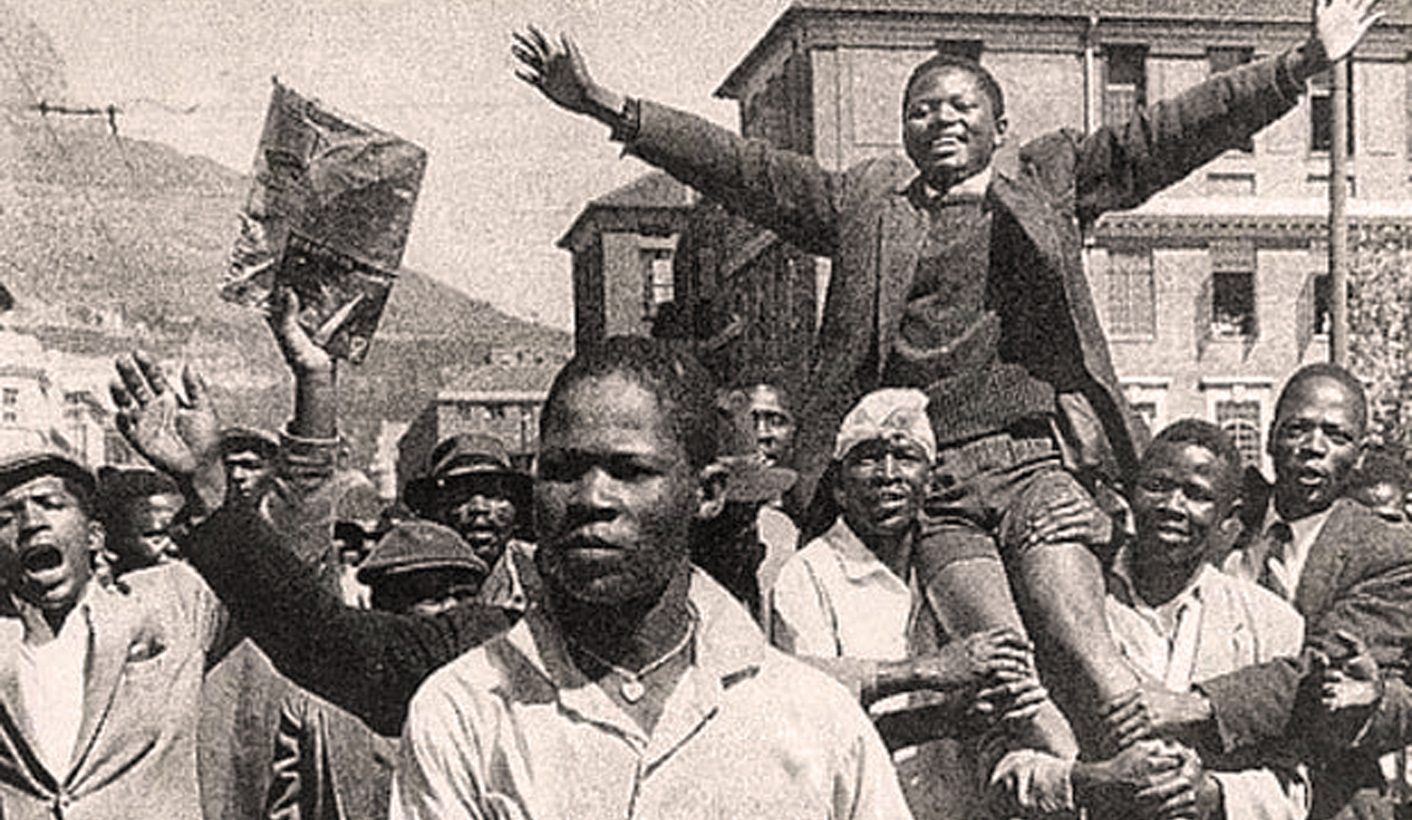 A slip of a young UCT student, with nothing but his bare hands – yet a trudging crowd of 30,000 behind him – taking on the armed might of apartheid. That was the awe-inspiring sight I had of Philip Kgosana making history nearly two generations ago. It speaks to us today in newly troubled, even perilous times. We must remember him, and the senior policeman he parleyed with, for decades. Their example is eloquent. By TONY HEARD.

The pivotal moment in history came on 30 March 1960, nine days after police shootings at Sharpeville and Langa had brought the wrath of the world down on Dr HF Verwoerd’s government.

Kgosana, unexpectedly (even for himself) and barely in his 20s, led a march by black people from Langa and other segregated areas on Cape Town to protest against pass laws and other cruelly enforced inhumanities.

The events of that day are well documented, and will now be relived as Philip passes from our scene, having died at the age of 80 on Wednesday in Pretoria.

Maybe now lessons will be learned, reminiscent of others gleaned from the passing of other SA icons recently.

Under a blazing sun, in the harshest of political times, Kgosana bore down determinedly on the centre of the city in short pants, the undisputed leader of a huge crowd who happened mainly to be men. Many wore customary hats and all were totally peaceful. That is, except temporarily for one voluble dissident who wanted to go and burn down Parliament, and stalked on a way ahead on De Waal Drive with this perilous course in mind. He was vehemently upbraided by Kgosana in an argument the latter won hands down, right there on the tarmac of the Drive – to which rebellious spot Philip had quickly hitched a ride in our newspaper’s car. He thanked us profusely for the help.

The crowd’s inherent respect for age was put totally aside as the young leader unerringly led them in peace towards they knew not what. They stopped for some time in the shade under pines that still preside near a favourite police roadblock at the bottom of the Drive.

Kgosana chose Caledon Square police HQ, not Parliament, as the favoured destination – which I believe saved Cape Town from conflagration. The cockpit of white power, the House of Assembly and Senate building, was ringed with steel, as I saw with dismay as a reporter Philip’s age. The scene was briefly lightened by a drunk trying to mount an uninviting Saracan armoured car and falling off.

Grim Nationalists and those of the almost equally conservative United Party were in session with MPs of the newly formed Progressive Party who had been warning urgently of dire consequences ahead for South Africa under Verwoerdian apartheid. A few MPs dared to watch, very white-faced, from behind the iron railings of Parliament.

Colonel Ignatius (Terry) Terblanche was courteous. He asked Kgosana, “as gentleman to gentleman”, to quieten the huge crowd. Two lieutenants lifted the commerce student, deflected from studies to struggle, up on their shoulders. Using a police megaphone, Kgosana told the crowd to be “as quiet as the graveyard”. Suddenly, everything went quiet. It was a telling commentary on sensational times.

The two men of destiny reached quick agreement. Few knew then that Terblanche had fallen to his knees to pray in the police station just before going out unarmed with a small party of colleagues to parley with Kgosana. Terblanche resolved rather to defy ministerial orders given him over the phone to “just shoot”. He decided to risk his career for peace.

He told Kgosana – in my own hearing – that he and a few others could return later for an interview with the justice minister, Frans Erasmus. He gave his personal assurance that this meeting would take place. Terblanche had kept the rows and rows of police lined up but locked in the courtyard, with stun guns at the ready. I saw them through a gap in the wooden doors, and immediately looked for a place to hide when the shooting started. I found out later that the one available stormwater drain next to the charge office door would have been crowded with reporters.

Kgosana and Terblanche were betrayed by a cold-hearted government that had spurned black demands for years, including the famous, and courageous, women’s anti-pass march of 1956 at the very doors of the Union Buildings in Pretoria.

Meanwhile, on the day of the Cape Town march, a countrywide emergency had been declared. The young regional secretary of the PAC, who was detained when he returned to police HQ for the promised interview, Kgosana later escaped South Africa and lived in exile, studied, and then worked for the UN children’s fund. He worked, inter alia, with refugees, and earned international commendation over his two decades of dedicated work before returning to SA and doing political and community work.

Terblanche was denied promotion in the police, rectified partially but belatedly as South Africa changed direction. Yet it was not promotion but history that vindicated his pragmatic common sense amid the panic of that day.

The country had to endure a whole generation of low-level guerrilla war, and more emergencies, after the draconian state of emergency declared in 1960 – which was used as pretext for breaking a solemn assurance and arresting Kgosana and friends.

I wrote in a memoir of my time in journalism, The Cape of Storms (1990, Ravan Press, p 100)): “If this assurance had not been given (by Terblanche) Kgosana would not have been satisfied and would not have told the crowd to disperse.” I offered the view that, in taking this course, Terblanche “avoided bloodshed that day”.

As we enter new times of tension, it is good to remember the peacemakers down the years, epitomised by both Kgosana and Terblanche. And to remember, too, the essence of peaceful protest that must be respected particularly in any democracy. Not to mention the need for calm response by government forces. May we learn these things fast, as the clamours to find one another hopefully outplay those intended to divide.

Yet we need more to happen, right on the ground where greats once stood. We need to commemorate exemplary bravery in lasting form so we never forget. One practical way is to adopt gestures of generosity, totally spanning party interests and animosities, that will embed inspiring events in our minds as we struggle with new challenges in South Africa. Notably, I suggested just over a year ago that De Waal Drive should be renamed Philip Kgosana Drive. Now that he is gone, this seems more in line with general council norms. That matter is pending, as the Mayor’s office confirmed in a tribute to Kgosana, but I believe it needs new momentum.

Yet, overall, we should complete and preserve the circle of gold embedded, I believe, in the hearts of most South Africans of all races , faiths and cultures. Call this the Spirit of 1994 and of the 2010 Soccer World Cup. We must grab at all symbols to arrest the current decline into hurling gratuitous, often racist abuse and epithets at one another, and remember the contribution of Philip and Terry jointly in some practical way.

I am told that Terblanche used to have his name remembered in a notice at a police club in Pinelands near the Old Mutual. It fell away years ago. That should be smartly rectified, but more: Some street or building of significance – maybe in the vicinity of Caledon Square, or close to De Waal Drive – should be found to remember this fine policeman. He should ride into history in tandem with Philip.

It all means overcoming reservations and chasms that lie deeply embedded in the politics and culture of our country. But we’ve done it before. I saw that spirit alive when, in March 2016, I was able to hear eulogies to both fine men, and to meet with Philip after so many years, at an occasion held at a Cape Town club honouring Kgosana and hearing his trenchant, challenging sense about present-day South Africa.

If the elusive spirit returns, Nelson Mandela, who seems to smile at us daily as we handle our banknotes, would beam on in his hard-earned rest. We could even get closer to the greatness he strove for, in inter-racial and inter-faith peace – but, as a most urgent priority, with more than a promise of prosperity for all, without which we have no future. DM

Tony Heard, Editor of the Cape Times, 1971-87, was awarded the Golden Pen of Freedom by the World Association of Newspapers and the Pringle Medal by the local journalists’ body after his full-page interview with “silenced” ANC great in exile, Oliver Tambo, in November 1985. This saw Heard arrested under security laws, with charges months later dropped and the newspaper fined. He is finishing writing the second stage of his memoirs, his personal experiences over more than two decades’ serving democratic governance as a special adviser and speechwriter.