Party/State conundrum: Holomisa and Zuma go head to head in court bid over a secret ballot 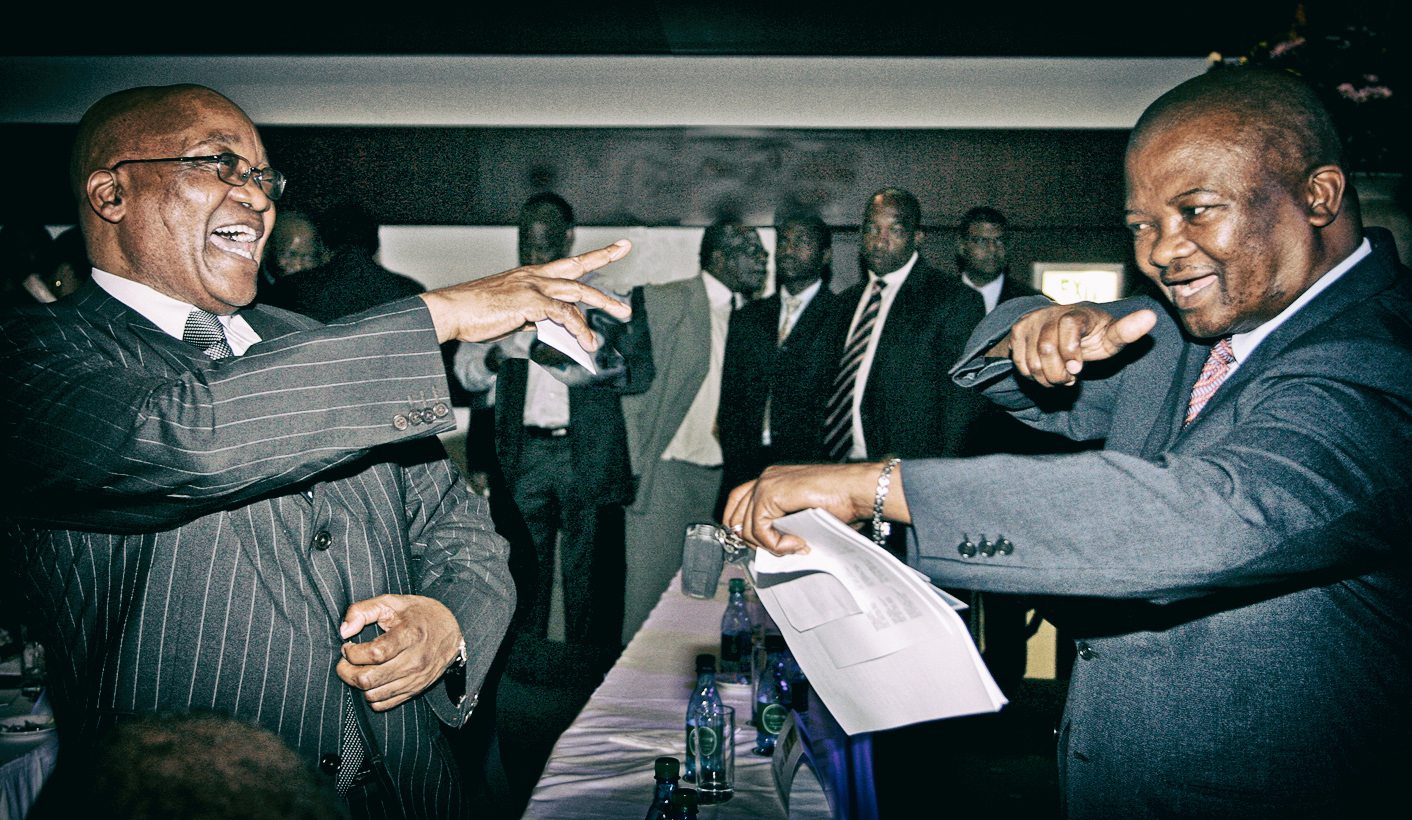 A special costs order should be made against President Jacob Zuma for conflating his role as South Africa’s president and ANC president “in an abuse of process” in opposing a secret ballot in Parliament’s motion of no confidence. It’s another twist in the United Democratic Movement’s application to the Constitutional Court on the issue. “(Zuma) then starts to lecture the court about party discipline and gives chapter and verse of the ANC constitution and disciplinary code when his duty as President is to protect the Constitution of the Republic above else,” UDM leader Bantu Holomisa argues in support of such an order. By MARIANNE MERTEN.

It was President Jacob Zuma’s expansive 19 paragraphs under the heading “The Party Discipline Principle” that set the cat among the pigeons. The ANC as a voluntary organisation, Zuma argued, with the right to determine its own rules like Section 5.2.7. that requires ANC members to “observe discipline, behave honestly and carry out loyally the decisions of the majority and decisions of higher bodies”. If they did not, disciplinary proceedings may be instituted under Section 25.

Because MPs are elected to legislatures on party lists, Zuma argued, “this obliges a member of a party… to remain loyal to such party consonant with the expectations of voters who gave their support to the party. The obligation of loyalty to party is not inimical to the notion of an accountable, responsive, open and democratic government”.

Holomisa disagreed with Zuma’s stance in his relying documents. “The issue of party discipline seems to be the main reason for the opposition mounted. The ANC was specifically cited as third respondent and chose not to get involved apparently leaving it to its president to articulate party policy at state expense. This is an abuse of process.”

“I am alarmed that the President would seek to use the Constitution, policies and procedures of the ANC in an attempt to engage in self-serving intimidation and scare mongering regarding ANC Members of Parliament who may be considering whether to support the motion of no confidence,” said Holomisa, adding that a motion of no confidence was a “unique and critical mechanism to ensure oversight of the President”.

Twice last year, in March and November, the ANC ordered a three-line whip, parliamentary jargon for ordering MPs to be present and toe the party line, and used its numbers to defeat no confidence motions. The ANC holds 249 of the 400 seats in the National Assembly on the back of its 62% voting support in the 2014 elections. Two-hundred-and-one votes are needed to carry the no confidence motion which then, in terms of Section 102(2) of the Constitution, requires that “the President, and the other members of the Cabinet and any Deputy Ministers must resign”.

However, not addressed by the UDM leader were Zuma’s arguments as to how Parliament works in a democratic dispensation where “the political parties that are the main constitutive element of the democratic process, the legislature and the executive, and not the members (MPs) allocated by parties to the legislative bodies”.

“As a matter of fact, that is the advantage of enjoying a majority in Parliament and that is how the mandate of the majority is carried out by the majority party,” Zuma said, arguing that the UDM’s application was tantamount to “judicial intervention where the majority party legitimately exercises its rights and powers”.

These arguments acutely highlight the deeply political character of Parliament, where the ANC has a years’ long track record of using its numbers to get its way, but also the disjunct to the electoral system.

While MPs come to Parliament on a party ticket on the back of a party’s polling support, their seats on the parliamentary benches are secure unless they are expelled, resign, die or are sentenced to imprisonment of over 12 months without the option of a fine. And all MPs swear an oath of office to “be faithful to the Republic of South Africa” and to “obey, respect and uphold the Constitution and all other law of the Republic”.

This party versus Constitution has never been tested as in the current political quagmire sparked by Zuma’s sacking of Pravin Gordhan and his deputy Mcebisi Jonas from the finance ministry in the recent midnight Cabinet reshuffle – triggering nationwide civil society protests on April 7, followed by opposition parties’ protest march to the Union Buildings on April 12, criticism by organised business, including the full-page Sunday newspaper adverts by Business Leadership South Africa, and the launch of the Freedom Movement on Thursday. There have been calls for Zuma to resign, or the ANC to recall him, from ANC veterans and the ANC alliance partners, the South African Communist Party (SACP) and labour federation Cosatu.

Zuma in his court papers dismissed that the no confidence motion could be linked to his Cabinet reshuffle, which is his constitutional prerogative. “All the law requires of organs of state, including the president, is that the exercise of public power must be authorised in law. What the Constitution does not require is that the consequences of such lawfully taken decision must have a particular positive or negative responses to it.”

But opposition parties, and others, publicly have argued that there was more at stake. And they have called on ANC MPs to vote with their conscience, not the line of the party, which has closed ranks behind Zuma following an extended ANC national working committee (NWC) meeting earlier this month.

There has been lobbying to secure support from the governing party as support of at least 51, preferably more, of the 249 ANC MPs is crucial to ensure the no confidence motion is carried. A secret ballot would allow ANC MPs to exercise their conscience without fear of disciplinary charges that would lead to expulsion. And there is appetite for this. “Many ANC Members of Parliament that I have spoken to have said to me that they would like the matter to be dealt with on a secret ballot basis in order to enable them to express their opinions clearly,” said EFF leader Julius Malema in court papers supporting the UDM application.

The UDM, EFF and IFP argue that a secret ballot is possible under Rule 103 of the National Assembly. Arguing it was “simply unlawful” for National Assembly Speaker Baleka Mbete to refuse to exercise her discretion under that rule, Malema said: “The Court should direct the Speaker to discharge her obligation that the Executive is held to account.”

However, Mbete, who is also ANC national chairperson, has argued against this, saying she had no powers in law, parliamentary rules or the Constitution to grant it. This argument is repeated in her documents to the Constitutional Court – “There is no express or implicit provision in the Constitution or the rules, that requires that the no confidence vote must be taken by way of secret ballot” – while she was “personally not averse” to such.

Instead, central to Mbete’s arguments is that opposition parties should have exhausted other remedies in their push for a secret ballot in a no confidence vote, including raising this in Parliament’s rules committee.

However, this was done most recently in 2015 – and the ANC closed ranks and used its numbers on the committee to dismiss the secret ballot rule proposal by a joint opposition party front. The IFP’s court papers in support of the UDM secret ballot court bid highlight how efforts for a secret ballot for a no confidence motion were stifled since 2010. The party tabled such a proposal then, again in 2012 and again in 2015, when “once again the matter has not been tabled or voted on” as required by National Assembly rules.

That the Constitutional Court requested documents on the secret ballot issue indicates its willingness to hear legal arguments. Friday [21.4] is the deadline for final submissions and, ultimately, a decision on whether it wants to hear full legal arguments in open court. If so, there will be a judgment. But South Africa’s courts have studiously stayed away from prescribing to Parliament how it runs its business in line with Section 57 of the Constitution. Even when rules previously were found invalid, the courts ordered Parliament to fix the defect itself.

Until there is a decision by the Constitutional Court, the current no confidence motion, initially scheduled for a special mid-recess sitting on April 18, has been postponed.

Mbete has referred the scheduling of a future date to the parliamentary programming committee with the caution that Rule 90 on anticipation applied. Effectively that means no other MP may table a similar no confidence motion until the one before the House is dealt with.

The courts move at their own pace, as does Parliament. The scene could be set for political playing kick for touch in Parliament pending the 2019 elections. DM