TRAINSPOTTER: On the road with Nkosazana Dlamini-Zuma, the president-elect South Africa can’t afford 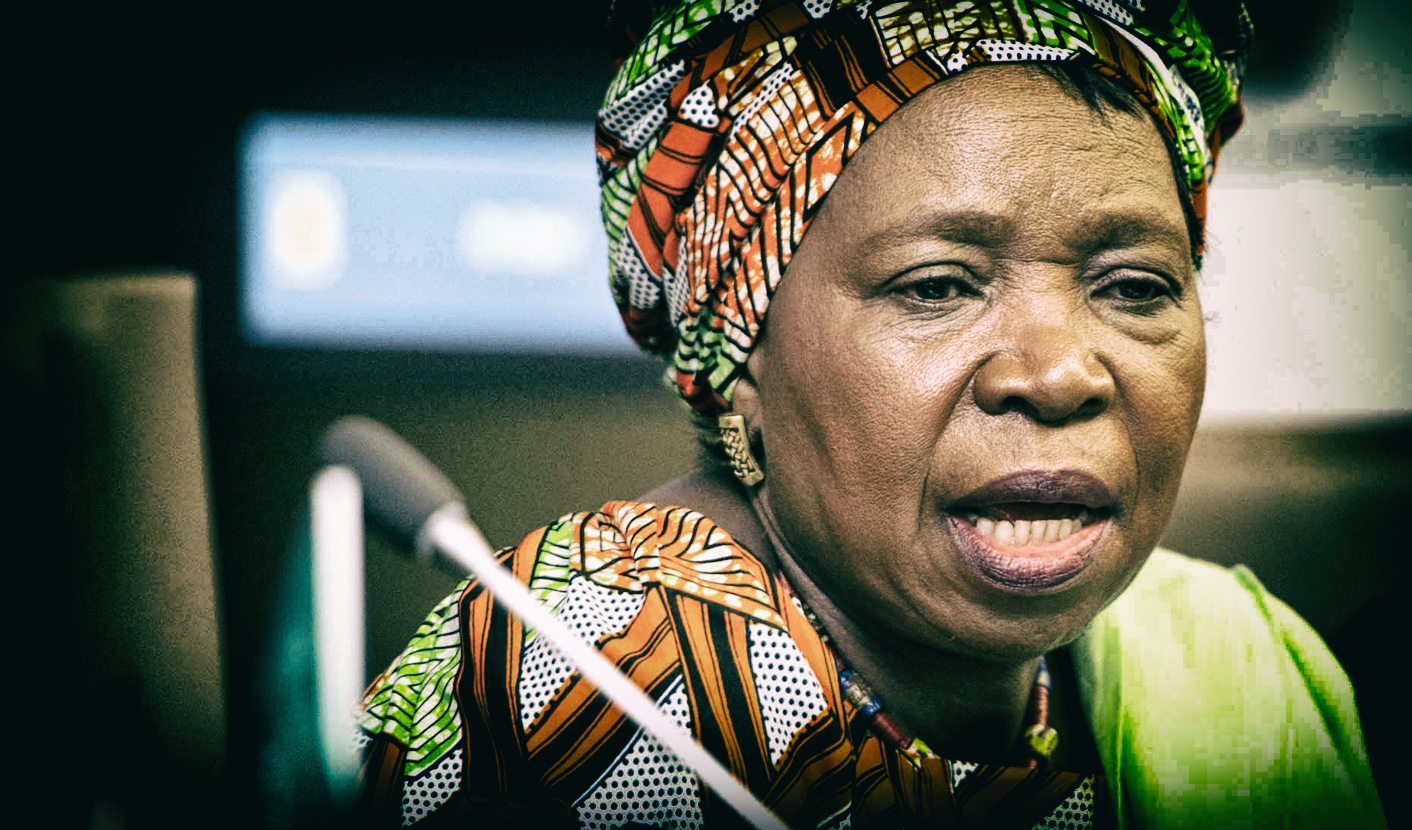 Four weeks ago, Nkosazana Dlamini-Zuma was familiar, and yet unknown. A month into her re-entry into South African politics, a picture has formed. It’s not a good one. The former African Union chairperson is an extension of the Zuma looting project – she and her former husband share the same friends, the same rhetoric, and the same dark outlook: what remains of the ANC will swallow what remains of the South African state. By RICHARD POPLAK.

Like most journos floating turd-like in the increasingly fetid South African press pool, I’ve spent way too much time with Nkosazana Dlamini-Zuma of late. Certain elements within the ANC have dispatched her on an endless roadshow, and she arrives in remote halls across the country to be greeted by the cries and ululations of her advance guard – the green-clad gogos of the Women’s League. She sits on a stage or at a podium with a vague smile on her face, clapping along to the Struggle songs, and then rises to rattle off a series of invocations aimed at white monopoly crapital and its attendant deprivations.

Direct engagement with Her Majesty is, shall we say, troubling. When addressed, she seems to have difficulty acknowledging the existence of other human beings. I conducted a brief interview with her at the Ahmed Kathrada funeral in Johannesburg, and after my first question, she cocked her head slowly – like an ocean liner trying to avoid a school of frolicking dolphins, and instead churning them up in the tail propeller. Her expression was one of utter bemusement, as if to say:

That’s her MO, basically. In a little video that has been widely shared, eNCA journalist Xoli Mngambi dares to ask the queen why she is being chauffeured around by a presidential protection unit – oh! and also, what on earth does she mean when she says “radical economic transformation”?

In response, she cocks her head, stares at a wall, and refuses to answer.

Which is all to say that two months ago, Dlamini-Zuma was a cypher – no one was quite sure what, or rather who, she represented. There were the upsides, of course. She is a black woman who became a medical doctor during apartheid, beating every odd imaginable – a long-ago display of presidential strength of character and intelligence. Indeed, she has been described by cadres as being an extraordinarily bright person, and despite a checkered governance history, which includes helping to engineer the famous Sarafina II scam, she did decent work in Home Affairs during Zuma’s first term. For the most part, however, her record is one big talentless grey zone. Still, considering that nothing was really known of her politics, there was some hope that she was a Thuli Madonsela in wolf’s clothing: an obvious and necessary appointment that would end up biting Jacob Zuma in the ass.

But nope. The fact that Dlamini-Zuma is the president’s ex-wife is not incidental – it is the most significant and disturbing aspect of her ascendency. (If the ANC was so desperate for a female presidential frontrunner, Baleka Mbete is the most logical terrible choice.) She shares four children and who-knows-how-many assets with the current president, and even the faintest whiff of a dynastic handover should create abject terror in the minds of South Africans. There are some rather out-there theories circulating, suggesting that the former partners planned all of this – a sort of Macbeth/Lady Macbeth team-up, with an eventual gender swapping of the Macbeth role when the time was right. But that’s not really how politics works. It’s all about finding a hole, and rabbiting through it.

The hole, of course, is the dissolution of the ANC as a functional political party, and its re-formulation as a weapons-grade looting machine. In this, Dlamini-Zuma’s most recent pronouncements, to say nothing of her behaviour, presage something worse than what’s come before.

First, there is the upsetting sight of watching a private citizen with no job, and no diplomatic status, enjoy the use of a presidential protection unit.

(The current justification for this is that she was in a hotel nearby the scene of a non-existent crime. They’re not even trying any more.)

Last week, while speaking at the ANC cadres’ meeting in Sasolburg, Free State, she hit on two of her current themes: radical economic transformation, and the misuse of the education system as a means of undermining “this glorious movement of Oliver Tambo”.

Not to “the people”.

Not to “the masses”.

To the ANC go the spoils.

In a winding address, she explained to cadres that the ANC controlled only about 20% of the economic power in the country, with 80% remaining in the hands of You-Know-Who. This would be addressed, she insisted, by funneling all of the country’s wealth into the ANC. In that way, black people will become magically empowered.

Where to even begin with this one?

First of all, the thought of a political party controlling even 1% of $327-billion-worth of GDP – an amount that equates to $3.2-billion – is utterly horrific. That she believes the ANC already has its hands on 20% – $65.4-billion! – is basically nightmarish. That she insists they should control all of it – 327 large, year in, year out – is… It’s frankly quite…

Indeed, at no point in her recent and extended debutante’s ball has Dlamini-Zuma exhibited any understanding of how democratic governance works. The same certainly goes for economics. Her imperiousness was on full display during her tenure at the African Union, a chairpersonship that dealt a deathblow to South Africa’s reputation on the continent. Recent trips to Addis have served as a reminder that there are fewer Africans more loathed than Dlamini-Zuma, largely because of her utter disinterest in the specifics, or even the generalities, of her mandate. In what must have taken serious skill, she has left no one un-offended. That the South Africans foisted her upon a very reluctant organisation didn’t help, and nor did it escape anyone’s notice that her leadership basically meant that the ANC was (badly) running the AU in order to keep DZ out of the local fray.

As she articulates her Weltschmerz in successive speeches and appearances, Dlamini-Zuma is emerging as the hyper-authoritarian pseudo-monarch that would punctuate this dying dispensation with a big fat full stop. Three weeks ago, I would’ve bet my nuts on Zuma running for a third term. Now, I know he doesn’t need to. Consider the Anointed One’s repeated references to the education system, and how she believes it has been designed to undermine the ANC. She shocked cadres in Sasolburg by explaining how universities taught students that “South Africa will only be a democracy when the opposition takes over”.

Apart from the fact that this is an implicit threat against academic freedom, it’s a statement that doesn’t actually mean anything. Is she saying that anti-ANC pro-democratic rhetoric is the curriculum at “universities”? Is it a blanket lesson imparted to those studying accountancy, liberal arts, nursing, mixology? Regardless, this kind of thing is consistent with her hijacking real issues – education reform; systemic black poverty; unequal economic distribution – in order to make them narrowly ANC issues. If Dlamini-Zuma’s version of transformation takes effect, decolonisation will mean singing praise songs and wearing party regalia to class, while robot professors extol a theodicy that justifies not the existence of God, but of the ANC.

All of this is made creepier because, as others have mentioned in these pages, Dlamini-Zuma does not place excessive demands on her fact checkers. She is quickly turning into the country’s principal purveyor of bullshit – Sean Spicer in a green, black and yellow doek. She doesn’t merely toe the party line, she moves it into a freshly curated reality. Kids at Model C schools are “taught to hate the ANC, and taught that the ANC is corrupt, the ANC is bad”. The banks gave their employees time off to march with SaveSA. Malusi Gigaba, who has sworn that there will be no policy deviations in his re-upped finance ministry, is our last best hope for a transformed economy.

Did I mention that her presidential protection unit is comprised entirely of tie-died dragons?

So what’s the game here? Let’s keep in mind that Jacob Zuma is not an individual. He’s an Inc., an entity. And one of the more important components in his machine is the elevation of his former wife into his current role. He already knew what we’re all learning: that she is a better, meaner and more efficient version of the same. She is 2.0, subject to all of the technological advancements inherent in Moore’s Law. And if you’re wondering about Dlamini-Zuma’s ultimate allegiances, one of her very few public appearances last year may provide a hint: she returned from Addis to accept from ANN7 a South African of the Year award, beating out Bonang Matheba, then-Eskom CEO Brian Molefe (!), then-Bafana Bafana coach, Ephraim “Shakes” Mashaba, humanitarian Imtiaz Sooliman, Miss World 2014 Rolene Strauss (I’m serious) and scientist Professor Salim Abdool Karim. When I questioned all of this in these pages, the Gupta troll army went into full froth-mode, with even Atul Himself jumping into the fray. It was an early lesson that Her Majesty has some avid supporters, covalent with those of her former husband.

But anyway, the chute to power has been lubed with political coconut oil, and off Dlamini-Zuma goes. That her primary praise singer is the almost supernaturally useless Bathabile Dlamini should remind us of what we’re dealing with: a hack who will use the carcass of the ANC to advance and escalate the Zuma looting project. If Zuma must fall, then so too must Dlamini-Zuma. They’re the two-for-one package that South Africa never knew it purchased, and certainly can’t afford. DM