Reporter’s Notebook: Time for Hlaudi to become a relic of the SABC’s crazy past 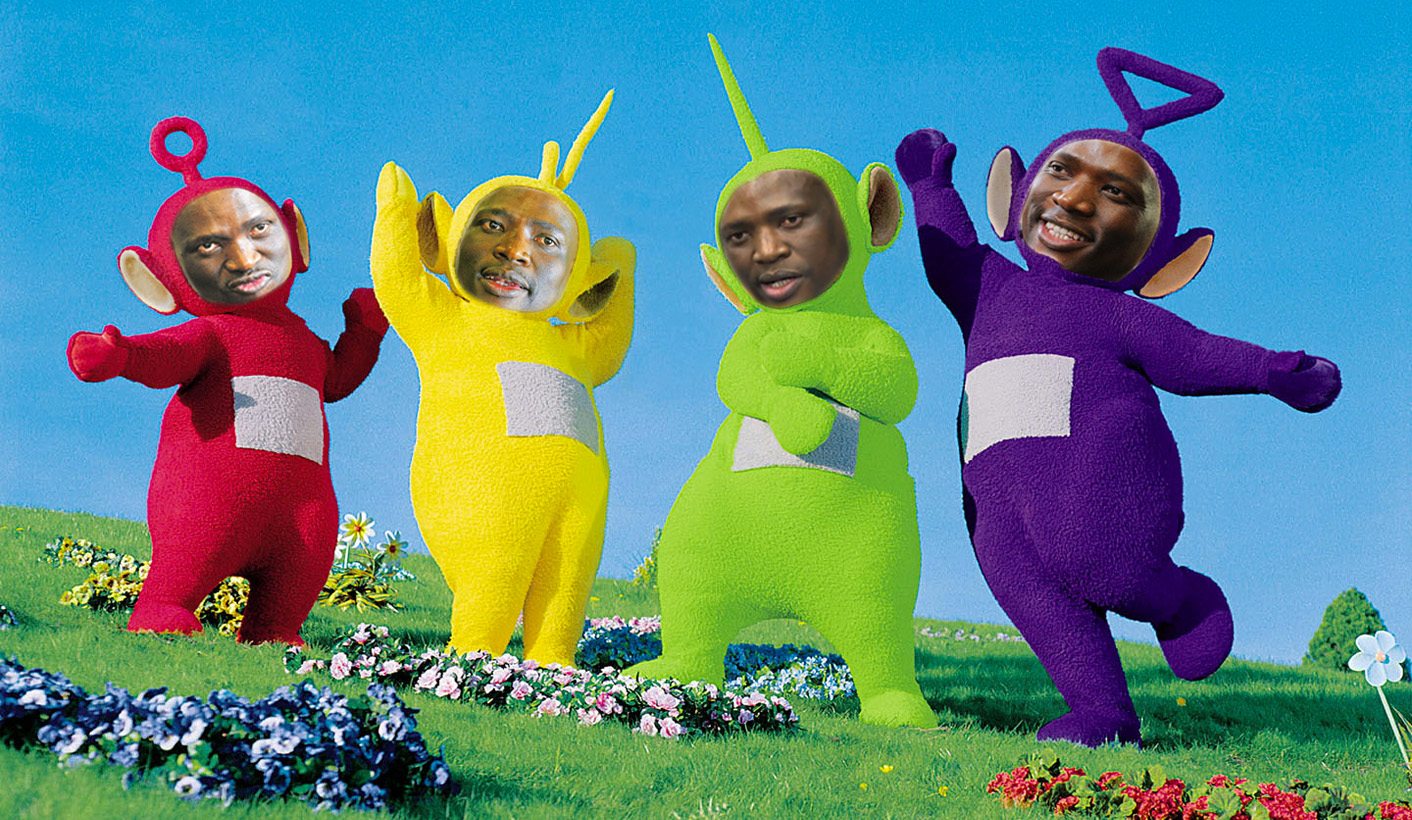 The SABC’s on-again, off-again leader Hlaudi Motsoeneng’s Wednesday press conference was billed as a game changer. Yet he regurgitated the same denials. Even Hlaudi’s soundbites have become boring – and it’s time to move on. By GREG NICOLSON.

“The people’s COO is on his way!” announced the MC. Journalists, musicians, TV producers and leaders of associations in the creative sector crammed into a room at Milpark Garden Court in Johannesburg. “Hlaudi is ours!” yelled a supporter in wraparound shades, dancing in front of a “Hands off Hlaudi” banner. “He belongs to us!”

Over a dozen cameras faced the podium as photographers and journalists elbowed for space. Hlaudi – who, like Prince, Mampintsha and Mandoza is known just by one name – was on his way. He entered and the room erupted in song. Tributes flowed for an hour. He was praised as an underdog who rose to benefit the poor, fighting for transformation against white minority capital, while returning pride, and cash, into local creativity.

“The moment of truth has come,” announced the MC. “The rose that grew from the concrete” was ready. The “cool cat” would set the record straight.

A moment, however, to review the state of play. The Western Cape High Court ruled in December that Motsoeneng’s appointment as group executive of corporate affairs was unlawful and irrational. He couldn’t hold a position at the public broadcaster until he faced satisfactory disciplinary proceedings or the Public Protector’s report was taken on review and set aside. The new SABC interim board was instructed to outline the charges against Motsoeneng within two weeks of its appointment.

In 2014, the Public Protector found against Motsoeneng for lying about having a matric certificate, getting multiple salary hikes, and purging opponents. He took advantage of an organisation in disarray, with “pathological corporate government deficiencies”. Successive boards allowed him to “operate above the law”. Backed by the board, communications minister, and apparently President Jacob Zuma, the SABC avoided the remedial action without consequence. Until last year.

In 2016, Motsoeneng unilaterally introduced local content quotas, 80% for TV and 90% for radio. Ahead of the local government elections, he said the SABC wouldn’t show footage of violent protests. He targeted staff who spoke against his decisions and the culture at the SABC, creating a rallying cry behind the “SABC 8”. Some in the ANC stood against him and an ad hoc committee was established in Parliament, detailing the crisis at the public broadcaster.

According to reports, the interim board is now seeking a government guarantee of up to R3-billion. The SABC took financial hits on the local content policy, its DStv channel, Motsoeneng’s staffing appointments, his decision to spend R1.2-billion on sports rights, and events hosted with Gupta-owned The New Age. The SABC is scrambling to pay independent producers and staff.

Back in the Hlaudiverse, the messiah stood up. The newspapers will fly off the shelves tomorrow, we were promised. Instead, Hlaudi regurgitated the same distractions and denials he has repeated for years. It was a stream-of-consciousness monologue from a determined megalomaniac with multiple realities, all contradictory, except one:

“I have been generating money for that organisation,” he said, claiming he left the SABC with sufficient costs to cover monthly expenses. He dodged more detailed questions and seemed unhappy that SABC journalists asked about the fate of their colleagues. “I can’t answer for the SABC when I’m not there,” he said. “When I left you, I’m smiling.”

Hlaudi dismissed the ad hoc committee’s report, claiming that because he was never asked to appear, it does not affect him. “The ad hoc committee, they caused more problems than anyone… They were looking for Hlaudi, just Hlaudi, because they know I mesmerise them.” He said a judge in the SABC 8’s successful Labour Court case was biased because his wife worked in a firm representing the journalists. “People who are causing problems for SABC are SABC employees.”

He said he is ready for his disciplinary hearing and is confident he will prevail.

Hlaudi slammed Krish Naidoo, who has been critical lately: “When you are a sell-out, you’ll be a sell-out forever.” He hit out at his opposition in general. “Because this noise, they want to make sure that black South Africans are not empowered, that black South Africans don’t run the economy,” he said. “Why do these people have so much interest? Why do they want to promote eTV?” He denied the SABC had paid Gupta-owned companies, despite his apparently cosy business relationship with the family, his claims that they shouldn’t be hounded, and the public broadcaster’s breakfast events with The New Age.

The “Friends of Hlaudi” crew was rapt. The man was speaking in half-sentences about transforming the country, making people rich, giving them the recognition they deserve, saying goodbye to imperialist capitalists. He played the victim while blaming lazy South Africans, embracing Rainbowism and radical economic transformation, all at the same time.

It got weird. OK, weirder. The Constitution should be changed to modify Parliament’s proportional representation system that allows for smaller parties to take seats, he said, claiming more parties are a waste of money. Hlaudi claimed he could be a minister, or president! But he won’t contest elections yet because he supports a female president. It was an obvious reference to Nkosazana Dlamini-Zuma, which he wouldn’t admit to. He did, however, admit to telling SABC journalists to prioritise coverage of Zuma over other leaders during the elections and said Zuma should be able to finish his term.

“Anyone who blocks transformation, I get rid of you,” he said, basically admitting to conditions ripe for purges of opposing staff.

Hlaudi says he loves South Africa, but he also loves Hlaudi. To him, Hlaudi is South Africa. A supporter on Wednesday called him Jesus. He’s built support through his local content policy. Artists and their representatives claim SA must support its own and build local industries and an appreciation for local talent. It ties into discussions on decolonisation and radical economic transformation.

The policy may or may not work, it may or may not be kept (indications from the incoming board is that it will be scrapped because it was hastily implemented and is financially crippling the SABC). The policy is a distraction. Hlaudi is a false prophet with fake depth, building fictitious hopes.

He claims his support is vast, that he connects with average South Africans, that he has “that Hlaudi thing” (queue meme hands in front of bloodshot eyes). But Hlaudi’s support comes from undue political influence, his dictatorial rule of the SABC, and an ability to purge opponents. He had power because no one would hold him accountable and he was able to avoid court decisions through repeated appeals.

His leadership won’t transform the country but will break the SABC. He has sold out to Multichoice and the Guptas. His policies have limited and skewed public debate. If it’s about economic transformation, look at the finances. Local producers currently are not being paid and SABC staffers are worried about losing their jobs. What do quotas matter if the SABC cannot pay royalties and production houses?

Hlaudi’s presser was sold as a game changer. It felt like we’d been crammed into his bedroom to hear his closest friends support his delusions of relevance. It was boring. If Hlaudi’s disciplinary hearing is properly constituted, the SABC should finally move on.