Nkosazana Dlamini-Zuma’s presidential protection: The Devil’s in the Security Detail 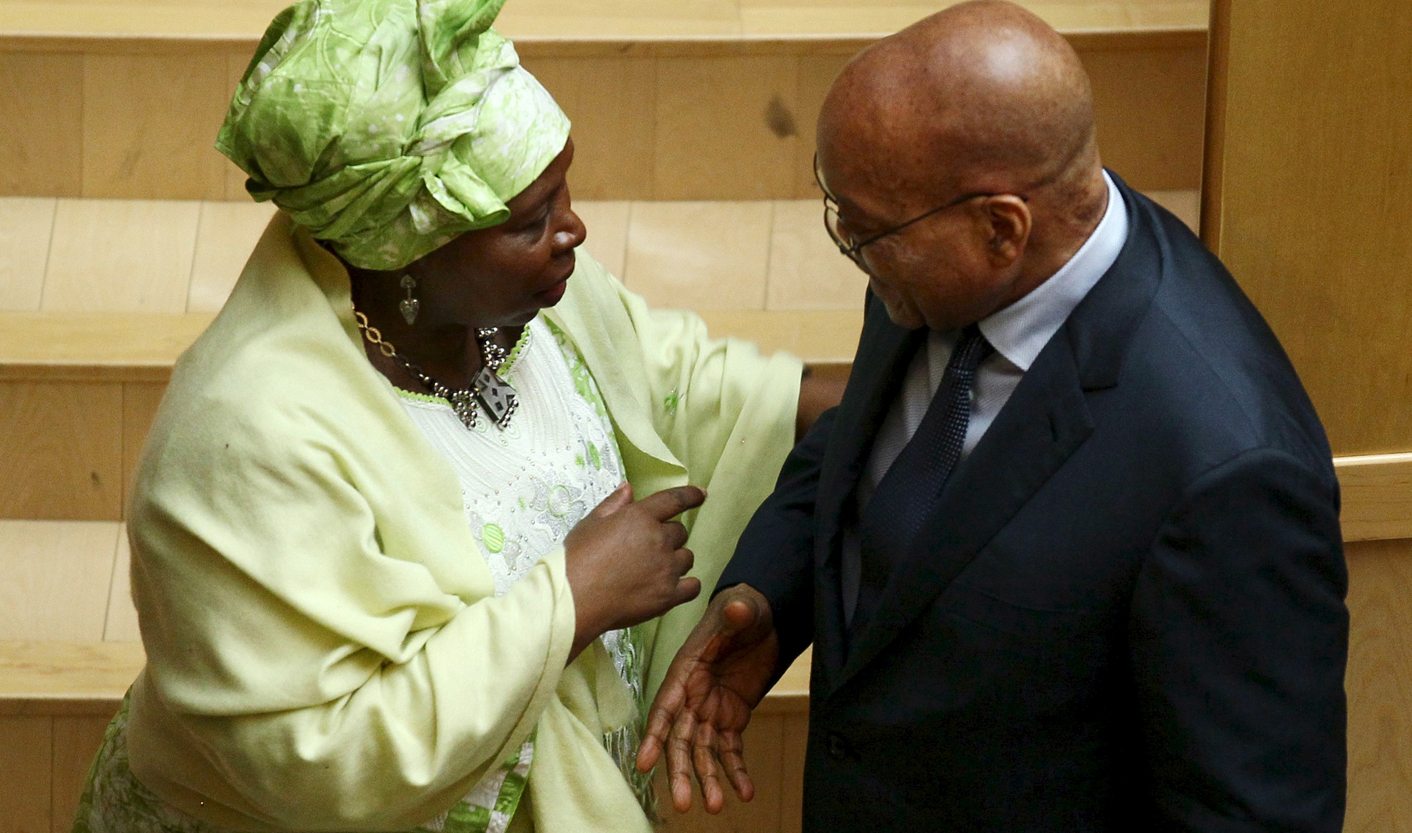 Some of the R2.808-billion SAPS protection and security services budget for the current financial year is being spent on former African Union (AU) chair Nkosazana Dlamini-Zuma. This is confirmed by police. But tracking down why specifically the Presidential Protection Service (PPS) is protecting her, rather than the VIP protection service, and details of the monies allocated to the presidential security detail, has proven to be a murky affair. What is perfectly clear is that we protect South Africa’s “important individuals” far better than South Africa’s borders. By MARIANNE MERTEN.

But when it comes to the PPS it seems most things go: it even has its own logo, separate from that of the SAPS, displayed on the black luxury 4×4 blue light vehicles, and on the lapel pins sported by its members.

The PPS gets a paragraph or two in SAPS annual reports under the headline VIP Protection Services, while the SAPS annual performance plans such as that for the 2017/18 financial year sets PPS targets like “100% protection provided without security breaches” whether in transit or static.

Another R997.9-million is allocated to SAPS static and mobile security, up 39.4% since the 2013 financial year, for the protection of the homes, offices and other places the president, deputy president, local and foreign dignitaries may find themselves. Operational support, effectively administration, receives R270.2-million.

In addition, R132.9-million is allocated this financial year for the Government Security Regulator, which provides security, evaluations and administration for national key points. This includes, for example, the Tuynhuys presidential offices at Parliament and the Union Buildings, but also other sites like SABC offices countrywide. There are a total of 248 national key points, according to the SAPS 2015/16 annual report. What isn’t quite clear from the various official Budget and SAPS documents is whether a slice of the regulator’s allocation is handed over to the PPS which, according to the SAPS 2017/18 annual performance plan, is responsible for evaluating 11 (unidentified) national key points.

In comparison, SAPS border policing receives R1,961-billion in the current financial year, or about R850-million less than protection and security services, to help secure just over 4,860kms of land borders. The South African National Defence Force (SANDF) has yet to deploy the full 22 companies to the border as stipulated by the national security strategy, due to financial constraints. According to Defence Minister Nosiviwe Mapisa-Nqakula’s 2016 budget speech, the SANDF has deployed just 15 companies, half of which are made up by reservists.

While the SAPS R2.8-billion protection budget is a sliver of the police’s overall R87-billion budget, it is still more than what is allocated to other policing functions. Special investigations, including those into organised crime, serious and violent crime and corruption, received R1,528-billion in the 2017/18 financial year. The SAPS forensic science laboratory, which processes evidence and supports investigators, received R1,972-billion. And the budget for crime investigations, or the detectives at police stations who investigate general and serious crimes, is R11.991-billion. That’s just over four times more than the SAPS protection and security services, but it must cover more than 1,000 police stations countrywide.

It remains unclear how much money the PPS receives from the overall VIP Protection Services allocation according to available official Budget and SAPS documentation. It’s also unclear what the PPS spends its money on.

However, in two weeks’ time Parliament’s police committee is briefed on the SAPS’s Programme 5: Protection and Security, including VIP protection, as part of its oversight mandate. “It is anticipated that the matter will be raised during the said Budget hearing by members of the Committee,” said committee chairperson Francois Beukman on Tuesday, adding that the committee had noted the public debate around the issue.

So if the PPS money trail is less than accountable, at least for now, what about its functions?

Amid the controversy over Dlamini-Zuma’s PPS detail this month, the SAPS on Good Friday issued a statement saying it’s “fully in accordance with their mandate and prescripts, informed by a threat and security assessment”.

“In terms of the Presidential Protection Unit’s mandate, protection is provided to the president and deputy president of the Republic of South Africa, former presidents, foreign heads of state and their spouses. The Chairperson of the African Union is afforded courtesies given by Dirco (Department of International Relations and Co-operation) with the status of president and while serving in that capacity, Dr Dlamini-Zuma was provided protection according to this prescript,” the SAPS statement said.

Daily Maverick has requested the official policy document outlining the PPS mandate, function and powers, but this has not yet been provided. It is understood no such policy document, or SAPS standing order or national instruction, actually exists.

As of March 31, 2017, Dlamini-Zuma’s status as equivalent to a head of state under AU protocols, to which South Africa subscribes, ended because the new AU chairperson assumed office. There are no AU chairpersons-for-life.

Dirco has already confirmed that the “courtesy” of protection under its auspices ended on the last day of March 2017. And Dirco spokesperson Clayson Monyela on Tuesday added: “Beyond that, we are not involved in any decision. We were not consulted.”

But the SAPS statement also made reference to security assessment and “ongoing investigations in relation to threats directed at her person” to justify whether “further protection is being provided”. Said acting national police commissioner Lieutenant-General Khomotso Phahlane: “For security reasons, the SAPS will not discuss or deliberate on any details of the security afforded to Dr Dlamini-Zuma, or in relation to the mentioned threat and security assessment. That in itself would constitute a breach of security.”

According to the 2015/16 SAPS annual report description of the PPS’s functions, Dlamini-Zuma does not qualify for a PPS protection detail unless she’s an “identified VIP” – and the SAPS Good Friday statement did not say so expressly, but referred to her former job at the AU.

At present, Dlamini-Zuma holds no official job in South Africa, nor is she the spouse of President Jacob Zuma, as their divorce in June 1998 is on public record.

Neither is Dlamini-Zuma on the list of persons for which the SAPS routinely provides VIP – not PPS – protection in terms of “Cabinet Memorandum 1A of 2004”, according to a May 2010 parliamentary reply by then police minister Nathi Mthethwa. His parliamentary reply lists, among others, ministers, their provincial counterparts, deputy ministers, Parliament’s presiding officers and speakers of provincial legislatures, the chief justice, deputy chief justice and heads of courts like the Supreme Court of Appeal president and deputy and High Court judge-presidents.

The SAPS provides protection to political public figures following threat assessments – this included four bodyguards for Julius Malema when he still headed the ANC Youth League, though not now as leader of the EFF which pays for his bodyguards, as does the DA for its leader Mmusi Maimane, after the SAPS declined to provide protection. But Dlamini-Zuma currently falls outside this category, even if the ANC Women’s League has publicly endorsed her for ANC president ahead of the party’s December elective conference.

Someone, somewhere, made a decision, ticking the boxes, and is hoping to get away with it under the official invocation of security. DM