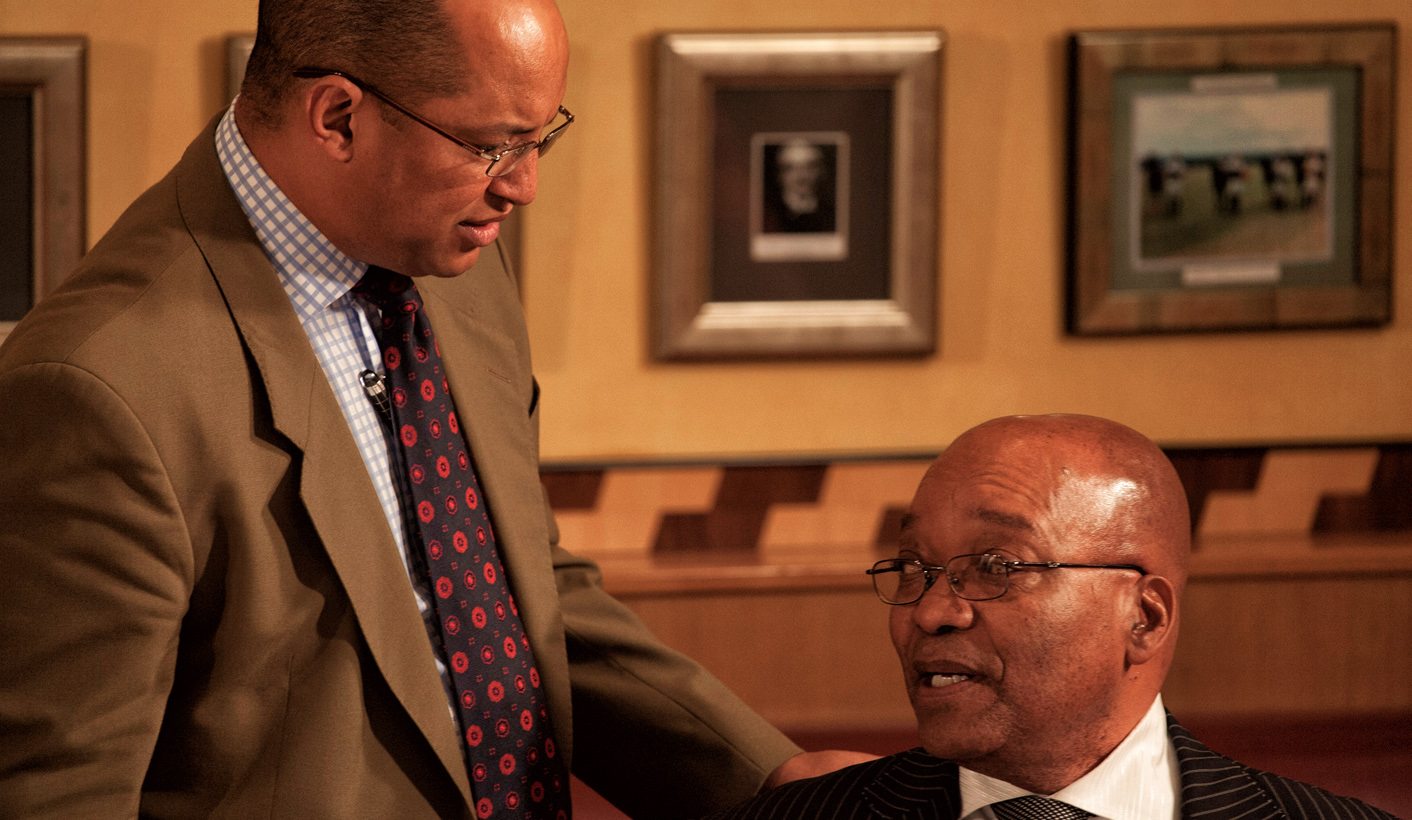 It was the president’s legal adviser, Micheal Hulley, who originally recommended Mxolisi Nxasana to head up the National Prosecuting Authority in 2013. It is perhaps a cruel irony then that Hulley might now face charges of attempting to defeat the ends of justice after Nxasana revealed in an explosive affidavit that Hulley had attempted to get him to lie under oath that President Zuma had not pressured him into vacating his office in 2015. By MARIANNE THAMM.

Former National Director of Public Prosecutions Mxolisi Nxasana’s April 11 affidavit in response to a Corruption Watch (CW), Freedom Under Law (FUL) and Council for the Advancement of the South African Constitution (CASAC) application seeking a review of the R17-million “golden handshake” makes for enlightening if not depressing reading.

The usual suspects – all the President’s men and women – make an appearance. There is the lead actor in the unfolding national political tragedy, President Jacob Zuma, then there is his personal legal adviser, Michael Hulley; there is Minister of State Security, David Mahlobo, there is former minister of Justice Jeff Radebe, current Minister of Justice Michael Masutha, and there are also, of course, Advocates Nomgcobo Jiba and Lawrence Mrwebi, who have since been struck off the roll of advocates, a decision they are appealing.

Some of these players will go down in history for their heroic roles in protecting President Jacob Zuma, that is, of course, if they don’t find themselves flung under the bus along with Mthandazo Ntlemeza who overnight found himself no longer puckering the big chair at the Hawks HQ in Silverton, Pretoria.

(Ntlemeza still thinks he’s on leave and has since stated that he is pressing on with a Supreme Court appeal of the North Gauteng High Court ruling that his appointment is illegal and invalid.)

Nxasana’s affidavit, provided by the former NDPP to the Pretoria High Court in a civil matter by CW, FUL and further proceedings by CASAC seeking Nxasana’s settlement to be declared unconstitutional, unlawful and set aside, is damning of President Zuma, Hulley, Jiba and Mwrebi, to name only a few mentioned in it.

In the affidavit Nxasana sets out that he never intended to leave office and that he had been pressured by President Zuma to do so and that the president had lied in his responding affidavit that he [Nxasana] had agreed to step down.

He confirms that after he had been served with the application by CW, FUL and CASAC in 2015 he had met on October 22 with Minister of State Security, David Mahlobo, at the Beverly Hills Hotel in Durban “at his request”. Mahlobo was in Durban at the time to speak at the… wait for it… “Integrity Leadership Summit” hosted by Premier Senzo Mchunu.

The following morning Nxasana attended a meeting with Hulley and Mahlobo’s Chief of Staff over breakfast at the hotel.

“During that meeting Mr Hulley inquired as to how I intended to approach this application by Corruption Watch and FUL. I advised him that I had not filed an intention to oppose.”

Hulley, says Nxasana, then “proposed that I should work with the president on the matter” and that he had offered to pay his legal costs. Nxasana had declined the offer saying he wanted to wait and see what the president intended to file.

“It was evident to me that Mr Hulley wanted me to say on oath that I had made a request to the president to vacate my office in terms of section 12(8) of the NPA Act. I advised Mr Hulley that I was not prepared to make that statement since that was not what had occurred factually. I reminded him that I was an officer of this court and that I would not mislead the court,” said Nxasana in his affidavit.

In June 2015, Accountability Now, in a separate case to the one by CW, FUL and CASAC, lodged charges (CAS No 87/7/2015) of contravening section 9 of PRECCA or alternatively defeating the ends of justice at the SAPS in Ocean View against President Zuma and Minister of Justice Michael Masutha also in relation to the R17-million settlement to Nxasana.

In the aftermath of Nxasana’s affidavit, Accountability Now director, Paul Hoffman, has subsequently requested the investigating officer to consider adding further charges of perjury to the original complaint against President Zuma. He added that it was now also feasible to charge Hulley separately with attempting to defeat the ends of justice in his attempt to get Nxasana to lie under oath about the “fabricated request” to leave the office of the NDPP.

In a follow-up note to the investigating officer Hoffman said that it was possible to add Hulley as “third accused in the matter currently under investigation in the light of what Nxasana says about his role in the matter. It seems Hulley was astute to make his suggestions to Nxasana without any witnesses present, but the line taken by his boss will help with the version of the conversation with Hulley that Nxasana has deposed.”

Hoffman has said that because the Minister of Justice signed the settlement agreement with Nxasana in Cape Town, the relevant jurisdiction is the Western Cape High Court.

Daily Maverick has learnt that this case, according to the investigating officer, was being handled by current NDPP, Shaun Abrahams, because of its “high profile” and that the docket is under the supervision of Advocate Raymond Mathenjwa who is attempting to get it “trial ready”.

Mathenjwa, co-incidentally, is currently the lead prosecutor in the case against former NPA prosecutor Glynis Breytenbach and her lawyer Gerhard Wagenaar, in the Pretoria North Magistrate’s court on charges of defeating the ends of justice. It was Mathenjwa who also attempted to prevent Jiba (who illegally suspended Breytenbach) from taking the stand during the duo’s appearance in February this year. In that matter Mathenjwa had argued that it was not “in the interests of justice” for Jiba to take the stand, but he was overruled by the magistrate.

In his communication with SAPS, Hoffman has suggested that Abrahams is “in a hopelessly conflicted situation now that Nxasana has made it public that he wants the position of NDPP back” and asked how the NPA proposed to handle “this intractable conflict of interests”.

SAPS has also told Hoffman that the Department of Justice had not been co-operating in relation to the paper trail of correspondence and documents in the matter.

“We suggest that a search warrant be obtained if the prosecutor feels the need to have any of the background documentation to which you referred in the context of your fruitless efforts to get a voluntary disgorging of documents from the officials in the Justice Department. It could well be that the sensitivity of the matter or their loyalty to their minister or both are such that no voluntary co-operation will be forthcoming,” Hoffman wrote.

Some of the claims in Nxasana’s affidavit are that Jiba and Mrwebi undermined his leadership and standing with the president, informing Zuma that Nxasana had intended reinstating criminal charges against the president and had in fact met with former NDPP, Bulelani Ngcuka. Zuma had later questioned him about the meeting, which supposedly took place in a Durban flat.

Nxasana, before his appointment, recommended by Hulley, was the president of the KwaZulu-Natal Law Society. In his affidavit Nxasana says that Hulley had approached him, telling him that his colleagues had recommended him for the position as NDPP.

During his troubled tenure Nxasana also clashed with disgraced Hawks head Ntlemeza in March 2015, with regard to the decision to charge former Hawks head Anwa Dramat as well as Gauteng Hawks head General Shadrack Sibiya in the “Zimbabwe rendition matter”.

Nxasana had, at the time, received an “instruction” from Gauteng Director of Public Prosecutions, Sibongile Mzinyathi, to charge Dramat but, as head of the NPA, had decided not to act on this.

Mzinyathi popped up again last year when she was named by Shaun Abrahams, along with Dr Torie Pretorius, head of the NPA’s priority crimes litigation unit, as being instrumental in pushing for Pravin Gordhan and Ivan Pillay to be charged. The charges were later withdrawn when it became apparent that a vital exculpatory piece of evidence, the “Symington memorandum”, had not been included (either deliberately or through incompetence) by Ntlemeza in his docket to the NPA.

In March 2015, after Nxasana had refused to prosecute Dramat and Sibya, Ntlemeza demanded that he return the docket to him.

Hulley is one of Zuma’s closest personal confidants and has acted as his personal lawyer and legal adviser since November 2011 when he was retained for around R1.43-million a year for a 40-hour week. On June 24, 2015 he signed a contract that expires with Zuma’s term of office. DM