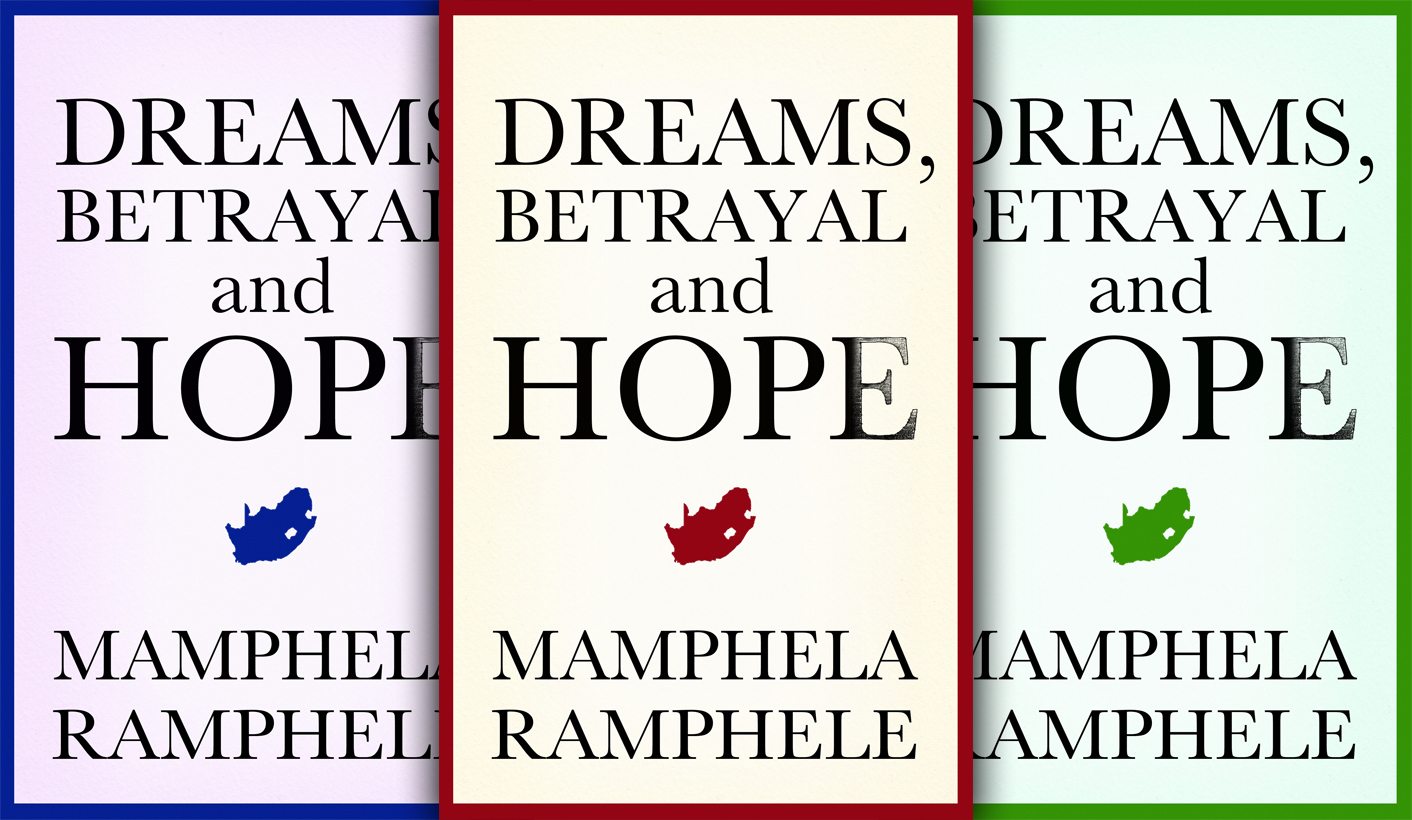 Mamphela Ramphele’s latest book is called ‘Dreams, Betrayal and Hope’. If the order of the “hope” and “betrayal” were swapped, it might be an apt description of the journey of many Agang voters. Though Ramphele has kept a low public profile since the failure of her foray into party politics, her book suggests that she remains as idealistic as ever about the contribution she can make to South Africa. By REBECCA DAVIS.

The title of Mamphela Ramphele’s latest book evokes Barack Obama’s 2006 memoir The Audacity of Hope – but the epigraph is Edgar Allan Poe’s A Dream Within A Dream, a poem which questions whether reality exists in the way we think it does. Little surprise that Ramphele might occasionally feel that way: her trajectory from a respected elder stateswoman of South African society to the political wilderness has been, at points, more than a little surreal.

The failure of Agang, the political party launched by Ramphele in June 2013, has clearly left Ramphele bruised. Whereas others might be tempted to turn their back on the public space altogether, however, Ramphele is not done. Her book burns with a fierce commitment to the idea of a better South Africa: a country with a functioning education system, transformed cities, and engaged citizens.

She is most passionate when writing about her encounters with the youth, and strong on education, noting that it is “alarming” that “our private sector has yet to show its opposition to the mediocrity that has come to characterise our system of education”.

Ramphele has important points to make about the erasure of aspects of African history and culture, and the significance of naming. She tells of her experience addressing a Sea Point synagogue in 2013, where she was haltingly introduced by the white male chair as “Dr Ramafela”. (I was there; it was excruciating.) After the event, she was told by an audience member: “You know, you could be so much more popular if you had an English name so people don’t have to struggle to pronounce your name.”

As a way of helping to heal the wounds of the past, Ramphele proposes a form of “emotional settlement” in order to address the pain and humiliation of apartheid, which would require group meetings to “[share] our stories as fellow citizens”. Black South Africans, she suggests, need to “acknowledge how their woundedness undermines their ability to assume the responsibilities and rights of citizenship”.

Ramphele is an impressive person, and her ideas are interesting and important. The reality is, though, that many people may approach the book in the hope of receiving a warts-‘n-all insider’s account of party politics. That’s not what the book is about – which is a good thing, because she is hardest to warm to when discussing the disastrous fate of Agang. Here, other people and institutions are frequently given the blame for the party’s failings.

She started Agang, she writes, after being “besieged by cries of anguish from many quarters to enter the party-political arena”. When the name Agang was announced, “not one political commentator or analyst saw fit to defend the use of an African name”. When Agang failed, “I learnt to see my fellow citizens without the idealistic blinkers I had carried from my days as a student activist.” It was South Africans who disappointed Ramphele, in other words, and not the other way round.

She writes with evident nostalgia of the early days of Agang’s launch, when she embarked on a “listening tour” of the country to hear the concerns of South African citizens. “The enthusiasm was intoxicating,” she remembers.

Nonetheless, her views seem distinctly rose-tinted. Ramphele still asserts that Agang “was a successful experiment”. Her first piece of evidence for this is that “it awakened the nation to the possibility of truly democratic participatory politics” – which seems an overblown claim. Her second piece of evidence is in the amount of money the party raised. Many ordinary citizens, she writes, “were sufficiently moved to contribute a total of R50-million in cash and R30-million in kind”. One wonders what these donors’ feelings about that generosity are today.

Ramphele describes the 2014 election result as “a great disappointment” for Agang, and attributes it to a number of factors. She blames low voter turnout among supporters, together with fear among voters of being excluded from the ANC’s patronage networks. She does acknowledge, though, that she also over-estimated her own power to attract people to her cause.

At points one cannot but feel sympathy for Ramphele, as an idealist in a world made of grubbier realities.

Ramphele writes; “The depth and widespread nature of transactional politics dwarfed any idealism and the politics of principle. What are you going to do for us? Where are the T-shirts? Where are the food parcels? Will you continue to give us social grants and RDP houses? These were the key questions on the campaign trail in many poor communities. Arguing that state resources were not ANC resources was akin to whistling in the wind. No one heard us. AgangSA could not compete effectively in entrenched transactional politics.”

Ramphele also charges the Independent Electoral Commission with leaving her “with the distinct sense of having been robbed of votes”. She cites an incident in Philippi which saw “ballots torn off bookbinders and handed over to voters standing in chaotic queues”, the fact that ballots were never counted at one district in Tzaneen because gunmen tried to seize five ballot boxes, and the fact that just one vote was cast for Agang in an area they considered a support stronghold: Langa.

These incidents are of concern, though on a small scale. Less convincing is her claim that there was insufficient time for Agang to contest the election: less than two years was, in her view, “simply not enough runway for an effective and safe take-off”. The obvious riposte to this is the success of the Economic Freedom Fighters, who launched in July 2013 and were able to win over 6% of the vote by the general elections in May 2014.

Then there was the chaos of the botched merger between the DA and Agang, for which Ramphele places blame firmly on the DA leadership. It “became clear that the DA establishment had an axe to grind with me for my earlier reluctance to accept their invitation to join the party”, she writes. “They were only interested in me as a leader of their party, not as someone wanting to initiate major policy shifts.” Ramphele describes herself as “shocked” and “astounded” by the behaviour of erstwhile DA leader Helen Zille during the process.

What Ramphele fails to address, however, is the sense of betrayal experienced by some Agang voters after the party’s disappointing 2014 election results led Ramphele to withdraw from politics altogether, rather than gritting her teeth and taking her seat in Parliament as an opposition MP. In so doing she effectively handed the party to Andries Tlouamma, who she describes in the book as “from the beginning seem[ing] to stir discord”. Tlouamma’s performance in Parliament has been routinely bizarre; one cannot imagine that too many of the 52,350 people who cast their vote in the hope of getting Ramphele into Parliament are satisfied with the way things turned out.

One leaves the book with the impression that one of the few people in the country who has not yet disappointed Mamphela Ramphele is Mamphela Ramphele. Yet still she soldiers on. “The dream”, she concludes, “is alive.” DM