Analysis: What if Zuma refuses to go? 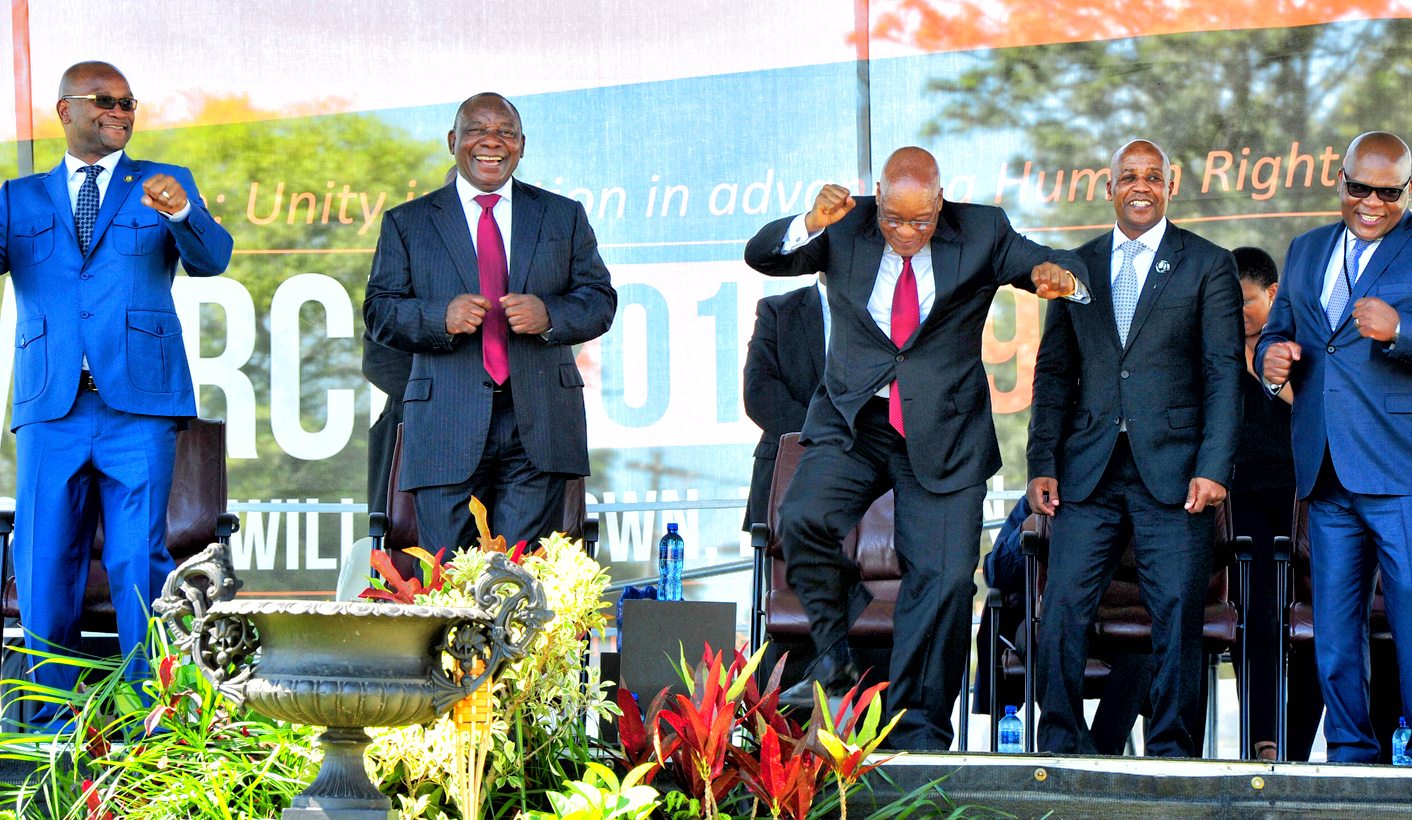 As a journalist watching all of the political developments playing out around President Jacob Zuma as closely as possible, I’m also interested in the questions that some might consider hypothetical. We keep asking if ANC MPs will actually vote against Zuma? We keep wondering aloud if the ANC’s National Executive Committee would actually go there? And then, what would happen in December when the ANC’s conference finally happens? IF it happens? But more and more, I’m being kept awake at night by one question in particular. If Zuma were to lose a vote, in Parliament, in the NEC, at an ANC conference, anywhere, would he actually step down? And if he wouldn’t, what then? By STEPHEN GROOTES.

I don’t see myself as an alarmist by nature. In the swirling politics of our times, I’ve tried as hard as possible to make sure that my views and analysis are as close to sober as possible. Sometimes I feel we don’t always consider what is really possible, and how cautious our politicians actually are. In particular I think people forget how hard it would be for an ANC MP to vote against their own party, and the genuine pain, and trauma, many of them must be feeling at this moment.

And I feel it’s very important to keep emphasising how Zimbabwe is not a road map for South Africa. The differences between the two countries are massive. Zimbabwe is much smaller, its population is not nearly as diverse as South Africa’s. Crucially, what went wrong there is that there was never a democratic change of leader through an election. And, once someone has been in power for 20 years, it’s almost impossible to get them out; their roots are simply too deep. Our country is very, very different to all of that. And that’s even before you look at our economy, and the very different urban/rural split that can sometimes define politics.

But then I have to look at my own experience of reporting on Zuma. Never have I seen him give in. On anything. Even on Nkandla, after the Constitutional Court judgment, he did not properly apologise. He did not say that he, himself was wrong. Instead he apologised for the “confusion and frustration” it had caused. He never apologised for his conduct.

When Zuma’s then financial adviser, Schabir Shaik, was found to be guilty of corruption for paying Zuma money, there was huge pressure brought to bear on Zuma to resign as Deputy President. In fact, it turned out that this refusal was part of a political strategy. It forced the then President Thabo Mbeki to sack him, and so the myth of Zuma as a victim was born.

I am not sure if Zuma actually has the ability to realise that he has made a mistake. It is a political tactic to refuse to acknowledge this, even if the evidence is glaringly obvious. It makes you look strong, it strengthens your supporters, and creates a myth that everyone is against you, and that they are wrong, while you are right. It is this kind of strategy that leads to “alternative facts” and a muddying of the moral waters. Moral clarity is bad for Zuma. Hence all of the now freshly departed Bell Pottinger Twitterbot attacks on “white monopoly capital” and journalists.

And then I have to consider the tactics that Zuma is currently using. On Wednesday the ANC held a birthday party in his honour. Reporters who were there spoke of the way that people had been bused in from the places that support him, from North West and Mpumalanga. You would have to look as far as Mzwandile Masina to find someone in Gauteng who supports Zuma nowadays. Earlier in the week, on Monday, Masina had turned a commemoration for Chris Hani into a factional event, with his supporters booing the SACP’s Solly Mapaila.

Stop and think about that for a moment. Hani is one of the biggest heroes in the liberation movement’s Pantheon. Zuma was happy to besmirch his name for his narrow political purposes.

The day before, of course, his supporters had done exactly the same thing to the memory of Ahmed Kathrada, disrupting both Pravin Gordhan and the ANC’s own Treasurer Zweli Mkhize.

And there is the use of the most divisive, most powerful, most difficult issue in our country – race. We can argue and debate and discuss and consider all the various problems we have with race, our racialised inequality, economic apartheid and systemic economic exclusion. But surely we can agree on this: Zuma’s motive in claiming that those who marched against him were racist is not to find solutions to these problems. His motive is only to divide and rule. I cannot see any other motive, otherwise surely he would have spoken about solutions to our problems on this before, rather than now, when he is suddenly under so much pressure.

And of course there is the behaviour of one of his strongest supporters, Masina, who says that he must “warn white people” and that “things are going to get rough”. Is he warning of violence, or promising violence? Because it sounds more like a threat than anything else.

Through all of these, by the way, there has been no condemnation by Zuma, the president. Even when some of these events have happened right in front of him. Surely it is presidential to condemn, in public, people who use a memorial for Hani for your own ends. But he hasn’t. And he won’t.

And there is a longer track record to this. In 2005 Zuma’s supporters heckled then Deputy President Phumzile Mlambo-Ngcuka. You can look for his condemnation of that event, but you will search in vain.

Perhaps the scariest element of all of this has been the attempt to remilitarise our politics. Suddenly, out of nowhere, a group of men too young to have ever fought for Umkhonto we Sizwe have appeared. They were outside Luthuli House on Friday, they were at Zuma’s birthday celebrations on Wednesday. Who are these people? Where do they come from? Because we already know who they answer to. And what kind of President does not take action when a private political army starts to walk the streets of the company they lead.

And never, ever forget that there is strong evidence that Zuma has been happy to tap phones and used the country’s spy apparatus in the past. In fact, you could argue, that has been the hallmark of his entire career.

It would be easy to assume, just on this evidence, that Zuma would refuse to step down in the face of any kind of vote or process that resulted in a decision against him.

But it is possibly even more complicated than that. It is hard to predict the behaviour of a person absolutely before the situation presents itself. For example, it must have been a surprise to most that Thabo Mbeki, a man considered authoritarian during his years in the ANC leadership position, now suddenly tells ANC MPs to vote according to their conscience, and not according to their party whip, when the moment comes.

So then, what are our likely scenarios?

It certainly seems that Zuma would have taken more power for himself than he has already, if he could get away with it. In the past, he hasn’t, not because he didn’t want to, but because he couldn’t. His support in the ANC is far from absolute.

Imagine for a moment this scenario. Zuma loses a vote in a forum that really matters, Parliament or the NEC. He stalks off, surrounded by his guards who appear to have grown in number and ferocity in recent months. He issues a statement saying he’s going nowhere.

Immediately, without the need for formal decisions to be taken, it is incredibly likely that Cosatu will join any anti-Zuma march going. Yes, S’dumo Dlamini is trying to have it both ways, but the interests of Cosatu’s constituency is surely to remove Zuma. Which means he can delay and prevaricate, but if this were to happen he would have to give up. Cosatu, despite its recent history, still has the power to call a national strike. And that call will be backed by business itself (on Sunday, Business Leadership SA ran full-page ads in newspapers making specific reference to “state of capture”). The country, almost certainly, will grind to a halt.

With the backing of Cosatu, and business, those marches will explode. This, as has been demonstrated countless times, is a country with no chill. To put it simply, we have a long history of marches and protest, it is part of our culture, and many people will have no option but to feel they too must join.

It is usually at this point that people start to worry about the role of the police and the army. “Look at Marikana,” they will argue, “look at how the SANDF answers to Zuma.” But protests aimed at Zuma would be peaceful, the marchers would not be armed.

As for the army, the evidence publicly available suggests it’s not big enough, unified enough or simply strong enough to really pacify this country. And there is no culture of a political role for the post-apartheid army, as you may have in Turkey or Egypt.

We are in a situation where it is hard to predict what will happen next, or how people will behave under the stress they are currently feeling, and will feel again in the future. But we should also not forget that this is a multiclass society, where different parts have access to resources. This makes it a hard place for any one person to cling to power illegally for long, no matter how hard they might try. DM