Analysis: Sport as a means of protest – civil respons...

Analysis: Sport as a means of protest – civil responsibly or crossing an unnecessary line? 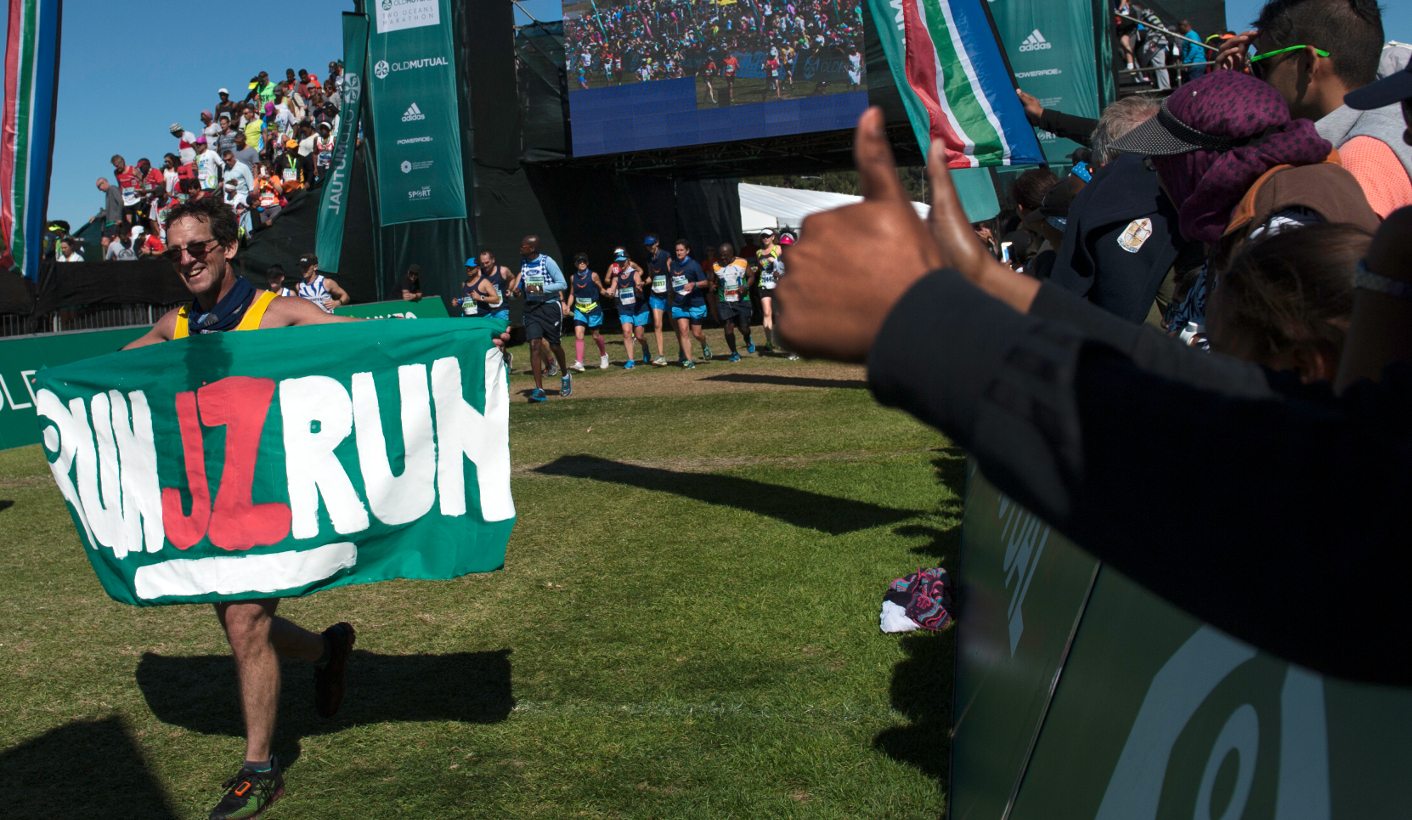 During the annual Two Oceans marathon runners were encouraged to wear black armbands to make a “statement against corruption”. The response to the campaign was mixed. Athletics South Africa reportedly threatened runners and race organisers with sanctions while others believe sport and politics should not mix. It’s a nice thought in principal, but the reality is far more complicated. By ANTOINETTE MULLER.

At the weekend, a group of runners taking part in the Two Oceans marathon donned black armbands as part of a campaign by Section27 and Save South Africa. The armbands, the organisations say, was a form of unity, not protest. Activist Mark Heywood even unfurled a “run JZ run” banner for the final stretch.

In the lead up to the campaign, where over 20 000 of these black armbands were handed out, race organisers cautioned against it, saying events such as these should not be used for political campaigning. Save South Africa even claimed that Athletics South Africa (ASA) said they would sanction runners and even race organisers who took part in it.

At the time of writing, ASA had not said anything further, although that might be because the governing body was enjoying a like the rest of us.

The campaign drew mixed responses on social media. Those against it say that “sport should just be sport”, but this thinking is naïve. Sport and politics have been mixing for centuries. In fact, the two are inextricably linked. Academics have long theorised that played a critical role in bringing democracy to Ancient Greece and its impact on the Civil Rights movement is well noted. Here in South Africa, the country was isolated as a form of sanction during the apartheid years.

More recently Colin Kaepernick made headlines for refusing to stand during the American national anthem while back in 2014, LeBron James and fellow NBA players Kyrie Irving, Jarret Jack and Kevin Garnett wore “I Can’t Breathe” shirts during NBA warm-ups. It referenced the last words of Eric Garner, an unarmed black man who died in a police chokehold.

Also in 2014, five players from the St. Louis Rams held their hands up in the iconic “Don’t Shoot” pose, adopted by Ferguson protesters. The NFL did not punish the teams or the players. It was their right to free speech.

But not all who protest are so lucky. Women’s NBA players were fined for “not conforming to uniform guidelines’ after wearing #BlackLivesMatter shirts. An outcry over the decision forced the WNBA to reverse the decision.

Kaepernick, too, is currently out of contract and unemployed, with some questioning whether this might be related to his outspokenness.

But it’s not just in America where athletes have spoken out. During the 2003 Cricket World Cup, Zimbabwean cricketers Andy Flower and  Henry Olonga donned black armbands, saying they were “mourning the death of democracy” in the country. The International Cricket Council refused to charge the pair, even though they deemed that it was indeed “political action”.

In the match that followed their solo efforts, nearly 200 spectators joined in. Zanu PF was outraged and Olonga was charged with treason. In the media, Flower and Olonga’s efforts were praised. England captain Nasser Hussain called them “great men”. Olonga was eventually granted asylum in the United Kingdom. This was an extreme example in an extreme climate and the consequences that followed for both were severe.

However, the sanctions did not come from the international governing body of the sport. And the incident is particularly pertinent in light of the weekend’s effort.

Save SA did their best to reassure everyone who had picked up an armband that their efforts would be legal and that the message was one “of unity”, but a black armband worn for any reasons other than mourning somebody’s death carries with it a distinct message.

This is not a bad thing, but the question is why did ASA seemingly try and bully organisers and athletes into not wearing these? Towing the line between suppressing freedom of expression and following the rules is immensely difficult, but when the immediate response is one of disapproval, many might want to question why.

Sport is an immensely powerful thing. The people who take part in it are incredibly influential. It’s why they get paid the big bucks by sponsors to peddle their products. And while we should tread carefully around elevating people who happen to be good at using their abilities for our entertainment to “role model” status, it is curious that South Africa’s athletes have remained silent on a number of issues in the last few years.

Some of South Africa’s most recognisable sports people are what you might consider “good eggs”. They do nice things for charity, kiss babies for selfies and tweet inspirational quotes. Yet, they have remained silent on big political issues – from Marikana to Fees Must Fall to State Capture and everything else in-between.

In a piece for eNCA last week, Daniel argues that the silence is borne out of fear and says that “it is up to us, the engaged citizens of the country, to encourage the political participation of our athletes and alleviate any fears they may have”.

Those who argue against the notion that sports people should be more outspoken say that sport is “just a job”. At a very basic level, that assertion is correct. But the irony that these very same people will probably say playing for a national team is the patriotic construct of “representing a country” will be lost on them.

To argue that there is some sort of patriotic pride attached to donning team colours and then not buying into the idea that echoing the thoughts of the tens of thousands of people who have taken to the streets in protest is not “representing the country” is disingenuous.

At its very core, sport is a civil act that warrants some form of civil and social responsibility. And, just like with civil actions by ordinary citizens, not everyone will choose to engage with that responsibility, but that no sportsmen in South Africa is curious, especially considering the country’s history.

And, considering ASA’s immediately defensive and aggressive response, would it be a bridge too far to wonder if perhaps some of the country’s governing bodies have issued instructions to their athletes to keep their mouths tightly shut on political action?

Holding those in power accountable is possible through inclusive mass-action. In fact, mass action is imperative for these things to succeed – just look at South Korea. But mobilising people can be difficult and will take more than an axed Finance Minister calling for such. Protesting on the frontlines might not be every sports person’s flavour, but it’s hard to believe that in South Africa, it’s no-one’s. DM