TRAINSPOTTER: At the National Day of Action, Malema makes friends — 100,000 of them 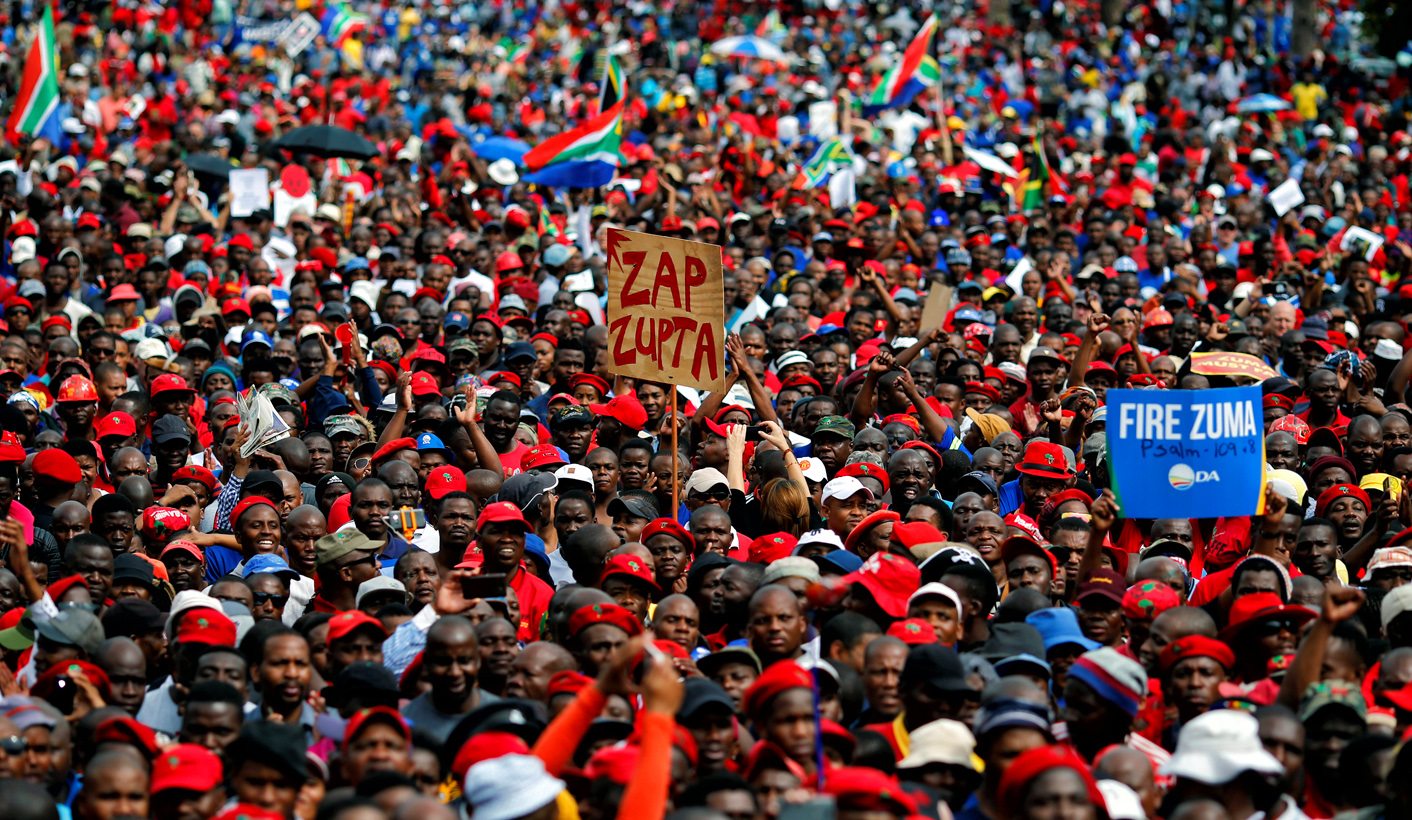 Wednesday’s march was big. It was pleasant. It changed the political calculus, and made Julius Malema the face of a united opposition. By RICHARD POPLAK.

“Castro has been a teacher to me,” the dead Venezuelan strongman Hugo Chavez once said. “A master. Not on ideology, but on strategy.”

He would have liked Julius Malema, old Chavez. The CiC is famously considered a “leftist”, but it’s difficult to know what that means in a country in which every politician and capitalist/ industrialist/ financier flips out when the delivery of social grants is threatened. Ideology in South Africa? Mutable. But strategy?

It was a bad day for journalists—no tear gas or flash bombs. It was a good day for South African opposition politics. Or, rather, an opposition coalition led by a political alpha who somehow understood that he could rustle up around 70,000 of his most faithful to march on the Union Buildings in our nation’s executive capital.

The Democratic Alliance, the Inkatha Freedom Party, Congress of the People, the Azanian People’s Organisation, the United Democratic Movement and assorted others – all of them showed up in small numbers to represent. But this could not have been confused for anything other than an EFF event. But had it been only an EFF event – which is to say, had no other political parties participated – then it would not have delivered anywhere near the same impact.

This was a united front. And that’s dangerous.

At Church Square, before the proceedings kicked off, it was already clear that this would be a much more sizeable event than Friday’s “civil society” anti-Zuma march. It was not a white crowd. It was not a middle-class crowd. For the most part, protesters were wearing EFF apparel. There were only a couple of hipster signs, and the best of them was sublime:

After warning the crowd to behave themselves, Malema and a coterie of other leaders hustled themselves to the front of the line, and were lead up by a row of Fighters in Chinese fatigues. Nowhere to be seen was DA President Mmusi Maimane, who was, according to his spokespeople, “abroad”. In his stead marched DA Gauteng leader John Moodey – a tactic that I’d guess was meant to ensure that Maimane wouldn’t play second fiddle to Malema.

Immediately as we pulled out of Church Square, it was evident that this was the biggest mass march since the #ZumaMustFall campaign began. The best piece of propaganda came from – who else? – Mzwanele Myani, who posted the following on Twitter: “BREAKING NEWS: Stats indicate that the march today will FAIL to mobilise even 200,000 people.”

Which is like saying, “Stats indicate that Messi will FAIL to score 400 goals in the Champions League this season.”

Anyway, off we went, in great messy goops of human, shoved tightly into Madiba Avenue’s concrete canyons. It was an excessively pleasant walk. The skies, ominous all morning, had clamped up, the battle between the weather Sith Lords having been decisively won by Malema. There was no aggression, and zero bad vibes – all of which was gently spiced by the occasional cloud of very sweet marijuana. In November of last year, I marched with the EFF following the SaveSA launch, and they had clearly been instructed to shut down the city and intimidate. This time, they had been instructed to leave saucers of milk for kittens and go full Rainbow. DA supporters hugged EFF supporters, and occasionally a copper would photobomb the selfie.

It was all very sweet.

On the stage at the Union Buildings, Julius Malema looked immensely proud of himself. It was noisy, so I made a gesture with my hands that suggested immensity. He grinned wider, and nodded. He’d say even less when he finally got to the stage. Like the other speakers from the other parties, he mocked Zuma’s generalised idiocy. He mocked the characterisation of the protests so far as racist. And he lauded the unity on display.

His political point was clear: for now, we’ll sign up with anyone until the arch enemy falls. Then? We take your houses and your mines and your banks. Through sheer numbers, he became the face of a united opposition, with SaveSA, the DA, UDM, and anyone else ceding necessarily to the strength of his political capital. And when/if Zuma falls – guess who steps into the breach?

There was no ideology on display. Just strategy. Raw gobs of it. Don’t get me wrong – Zuma is nowhere near being removed from office. But now a photogenic opposition has been assembled to take him on. They have the momentum. Zuma has the means. This doesn’t end in pleasant wafts of weed smoke. DM