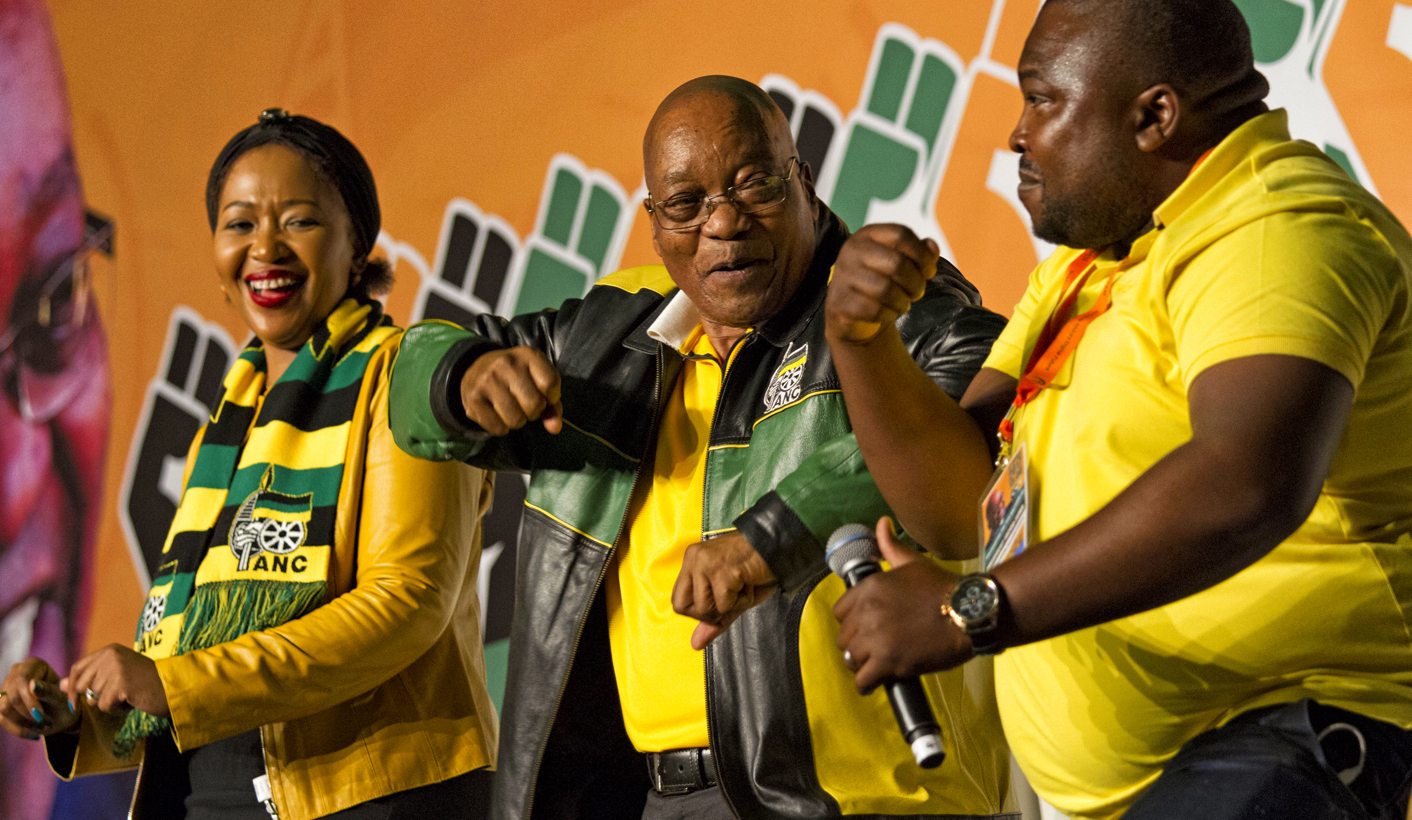 President Jacob Zuma looked equal parts relaxed and defiant as he celebrated his birthday in Kliptown on Wednesday. Why let the massive anti-Zuma march spoil a good party? By SIMON ALLISON and BHEKI C. SIMELANE.

We’re in Kliptown, not that anyone inside the giant tent can really tell. It is a hermetic seal; a garish green-and-yellow vacuum in which President Jacob Zuma can, for a while, pretend that everybody still loves him.

It is his birthday, after all, and what better way to spend it than in the warm glow of an adoring crowd? For a moment, as he walked in to a torrent of applause, the President might just have been able to forget that other, much larger crowd, the one that had gathered outside his office earlier in the day, demanding his head.

But reality is never too far away. It intrudes on Zuma’s cellphone, which he checks obsessively in his first minutes on stage. Perhaps it’s a coincidence, but the news that PR firm Bell Pottinger dumped the Guptas had just broken. Who’s going to man the paid Twitter now?

It intrudes too as realisation dawns that there will be notable absences: Where is Cyril Ramaphosa? Gwede Mantashe? Zweli Mkhize? Baleka Mbete? It isn’t clear if they were boycotting, or were simply not invited. Either way, it is hardly a show of ANC unity.

There is singing. There is dancing. Zuma struts his stuff; he does a slow dance, he does a shuffle, he even does a couple of high kicks. His rhythm is good for an old man.

There is praise-singing. “The very person who they are calling to step down is the same one who struggled for their freedom,” says minister Nomvula Mokonyane.

ANC deputy secretary-general Jessie Duarte indulges in a little revisionist history, crediting Zuma with a long laundry list of accomplishments, including South Africa’s extensive social grant system. “We are the only country in Africa that has a social network for the poor,” she crows, which is true, except that it was under Zuma’s watch that the whole system nearly came crashing down.

Sdumo Dlamini speaks. This is a surprise. The Cosatu president is supposed to be in the anti-Zuma brigade, although loyalties are shifting so fast it can be hard to keep up. Just eight days ago, Dlamini said “we cannot condone this” any more, the “this” being Zuma’s leadership. And we were there, on Wednesday, as he puts on his most obsequious tone and, head bowed in Zuma’s direction, wishes Zuma strength on behalf of South Africa’s workers. The air is thick with humiliation. Zuma slouches on his giant white throne armchair and laps it up.

Finally, the big moment arrives. It’s Msholozi’s time. He tightens his belt, straightens his trademark ANC-branded leather jacket, and launches into a 30-minute monologue. This is not the Zuma we know from Parliament or state dinners, but the Zuma from the campaign trail: fired up, funny, oozing charisma. Defiant. The whole thing is in isiZulu, which jibes with Zuma’s newfound image as radical economic transformer-in-chief.

“Thanks for remembering me on my birthday,” he says, with a knowing smile. As if anyone in this carefully orchestrated gathering could forget.

He brushes off the march at the Union Building. “Opposition will oppose everything because that’s their job. They will oppose, but don’t panic, it’s all normal.” He says that Nelson Mandela and Thabo Mbeki were attacked in the same way, and it won’t be any easier for the next ANC leader.

But he does insist there will be a next ANC leader. “I will leave the ANC in 2019 and work for the party for free. I will still have the strength to vibrantly debate the party’s policies from my branch, and if there is a conference I will be a delegate.”

Photo: And then, the cake arrived… (Photo: Simon Allison)

More applause, more singing, and then the cutting of a giant cake. Zuma does the honours, ably assisted by Duarte. It looks nice, if yellow icing is your thing, but the crowd of supporters – already dwindling by then – doesn’t get any. Zuma’s administration can barely administer social grants; it definitely can’t afford to let them eat cake. DM