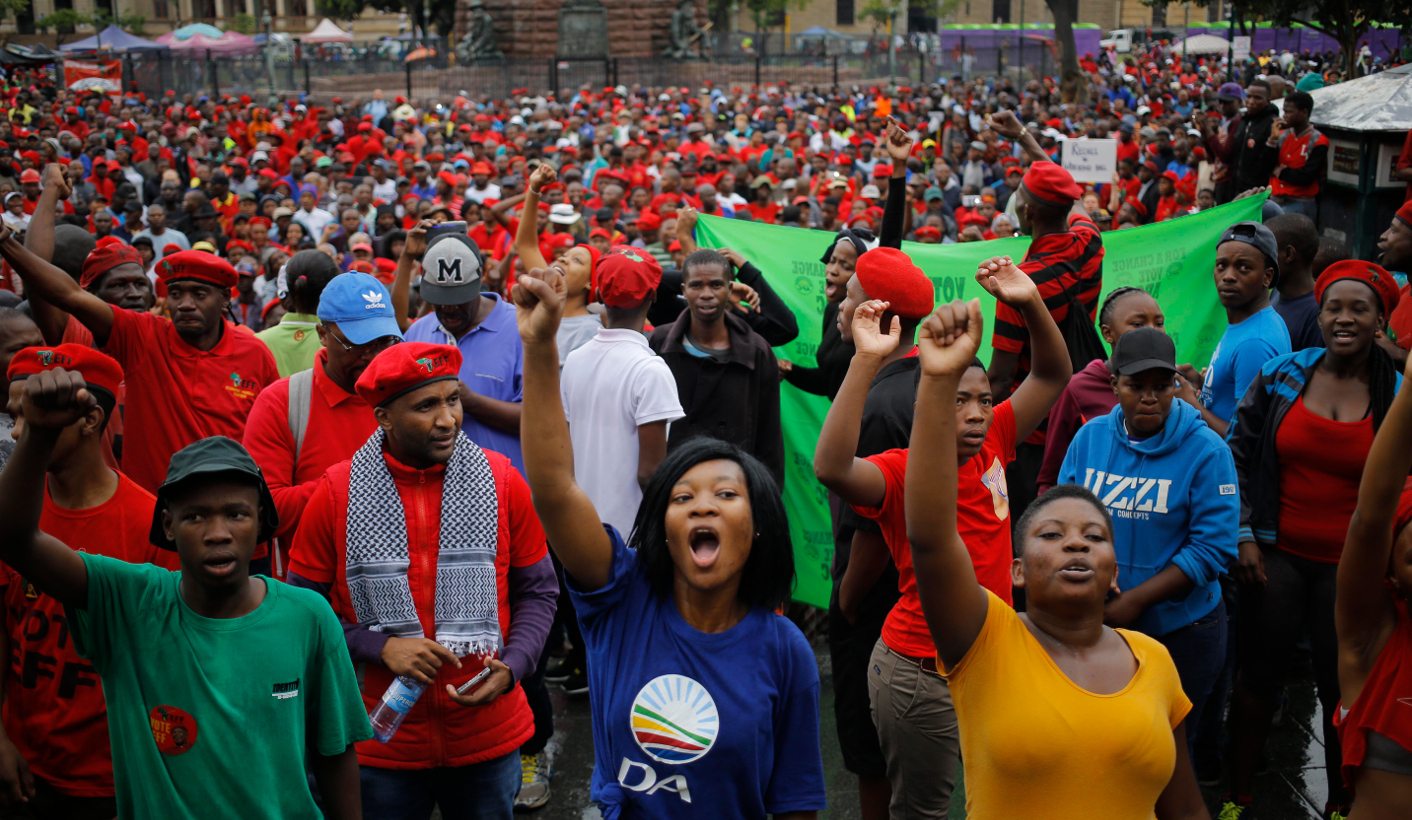 The claim of detractors over the past few weeks has been that anti-Zuma protest action is predominantly led, and participated in, by out-of-touch elites and white people. Wednesday’s National Day of Action was an unanswerable rebuke to such criticism – and it felt like a much-needed moment of unity. By REBECCA DAVIS.

In their thousands they came. They wore EFF red; blue DA T-shirts; South African flags. They wore all colours. Mostly, though, they wore EFF red. From early Wednesday morning they began streaming into Pretoria’s Church Square, undeterred by weather which looked set to stay wet and grim for the day.

It felt like a party. Stalls sold street food. EFF merchandise was being hawked next to DA goodies. Bikers in Fighter attire revved their engines every now and then to hype up the crowd. A man sat down with a beer at a café on the square. It wasn’t yet 11am. “Even revolutionaries need to chill,” he explained cheerfully.

Around the square, visible were the washed-out remnants of a previous political gathering held in the same space by the pro-Gupta Black First, Land First group. Their tattered flyers still adorned some walls: “Hands off Advocate Mkhwebane!”, a statement in support of the new-ish Public Protector. “President Zuma Fire Pravin Now!”

Pravin is now fired, South Africa’s economy has been downgraded to junk, and the people who turned out to march on Wednesday are not having any of it.

“Happy birthday to our junk President,” a sign read. It was in the hands of one Richard Mulambilu. Age: 41. Dress: EFF overalls. Job: Self-employed.

“I’m here because of our president,” Mulambilu said. “Look at how our economy is looking now. Enough is enough! We want to build this country. With Zuma there will be no progress.”

Earlier this week, President Jacob Zuma told the audience at Chris Hani’s memorial that recent protest marches have been characterised by racism. People have been out there brandishing placards of black people as baboons, he said. There were no baboon placards visible on Wednesday, but there were a fair number of butternut posters. A favourite insult among EFF supporters is to suggest a cosmetic similarity between the shape of a butternut and that of Number One’s head. “Mr Butternut Head Fall,” one banner demanded. There were many others containing commentary about President Jacob Zuma’s head shape.

Placards revealed that protesters were angry or frustrated with the country’s president for a multitude of reasons. There were references to the Fees Must Fall movement. More than one sign termed Zuma a rapist – and not in a Zapiro way. In a more literal way.

EFF’s Mbuyiseni Ndlozi, nabbed by the Daily Maverick for a moment pre-march, didn’t want to make things about him. “This is not just about the EFF,” he said. “I think that a lot of South Africans will heed this important call.”

They had. One man wearing a suit made from the South African flag indicated that he was a “multi-party protester”. Representatives from just about every political grouping you can imagine were there, including AZAPO, the Azanian People’s Organisation. “Zuma is a result, not a cause,” read an AZAPO poster.

Roger Ferguson wore one South African flag draped around his neck like a cape, and carried a second. Age: 53. Dress: T-shirt with Mandela’s face. Job: Former municipal manager. He had travelled from Cape Town for the march.

“I felt compelled to come today,” he said. “What I see is a nation coming together. I’m not here with any political affiliation. We’ve just got to try save this situation. We need ethical leadership: a national convention to discuss our morality as a nation, the Constitution, and more inclusive economic growth.”

The Commander-in-Chief took to the sound system at Church Square, and said that what everyone was there for was to demonstrate opposition unity. “We want to see a mixture of all parties…hold hands together,” Malema said. He also urged protesters to demonstrate discipline, and stick to the agreed route that the march would take to the Union Buildings. With that, the march was on its way.

It took two parallel roads to hold the volume of people flooding towards the Union Buildings. EFF marshals diligently kept things under control, with those revolutionary bikers also buzzing to and fro to shepherd the marchers in the right direction. Occasionally a police helicopter flew overhead, keeping an eye on the tens of thousands of people heading directly for the government’s seat of power.

When the Union Buildings were reached, riot cops were ready behind lines of razor wire to defend anything that should need defending. “Mbalula’s boys!” cried some protesters, in reference to newly appointed Police Minister Fikile Mbalula. “Here to protect Zuma!” taunted others.

People spread themselves out in the Union Building gardens. Skaftins were opened and tucked into. A lingering smell of marijuana breezed across the grounds. It fell to the Commander-in-Chief to remind the crowd: “We are not here for a holiday!” Marshals kept shepherding people in from the gates. “To take an elephant down is not easy,” one said, gesturing at the Union Buildings.

“Zuma must go today. He doesn’t lead people nicely,” Moloto said. Asked who she’d like to see replace him, Moloto replied immediately: “Me, I think [former president] Kgalema Motlanthe.” So why the DA get-up? “I like DA,” she said, smiling. “I like DA.”

One by one, opposition politicians gave the crowd the messages they had come to hear. Malema explained in the simplest possible terms what junk economic status would mean for the poor: “Your social grants will be used to pay off debt interests! Your food is going! In 2019, bread will cost R80!”

Ultimately, said Malema: “This is not an issue of whites!” And, moreover: “If not wanting Zuma is racist, then we are proud racists!”

It was powerful stuff. But by then, perhaps nothing politicians said could have been as powerful as the sight of thousands of South Africans united, for once, in common purpose. DM

Photo: Thousands of opposition party protestors march in the direction of the Union Buildings during a mass protest calling for President Zuma to step down in Pretoria, South Africa, 12 April 2017. Photo: EPA/KIM LUDBROOK