Uganda: Stella Nyanzi, the vulgar activist, takes on the Pair-of-Buttocks-in-Chief 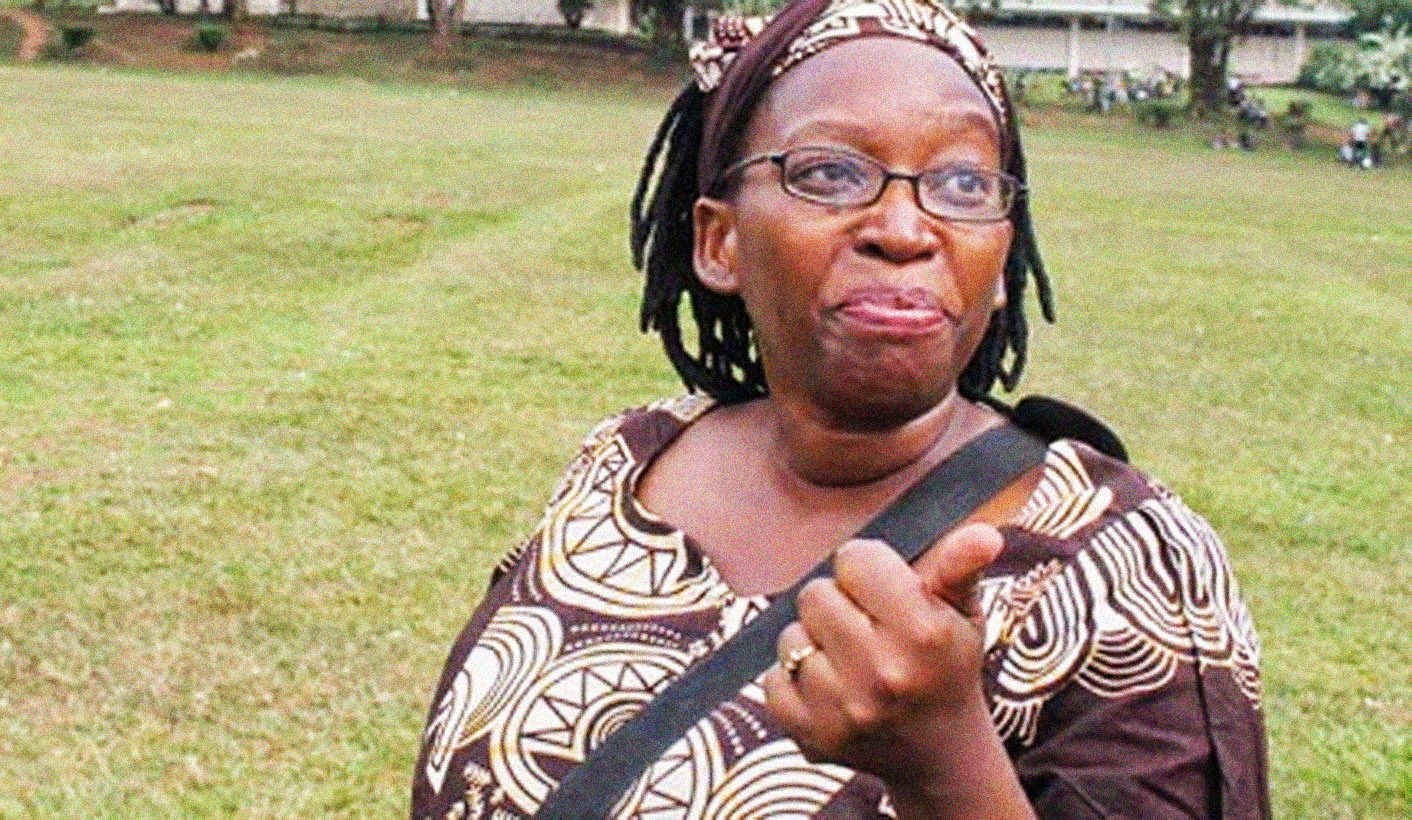 Stella Nyanzi does not care who she offends. The Ugandan academic’s scathing, searing critiques of her government are crude and vulgar, and have shocked the conservative sensibilities of polite society in Uganda. But they work, and her recent arrest proves it. By SIMON ALLISON.

#PairOfButtocks was trending on Twitter on Monday, and it was all Stella Nyanzi’s fault.

On Friday night, academic and activist Nyanzi gave a speech to the Rotary Fellowship in Kampala, Uganda’s capital. On her way home, she was arrested.

No one was surprised.

For months, Nyanzi has been ratcheting up her criticism of the Ugandan government, especially President Yoweri Museveni and First Lady Janet Museveni. In today’s Uganda, that’s a dangerous game to play.

But it was her campaign over the last few months to provide free sanitary pads to Ugandan schoolgirls that really put her in the government’s crosshairs.

First, she was dismissed from Makerere University for insulting the First Lady, who also happens to be the Minister of Education – under whose ambit Makerere falls. Then, earlier in April, Nyanzi came home to find armed military policemen in her house – a clear attempt at intimidation. The authorities let her go on that occasion. But now she’s been arrested and charged with cyber harassment and offensive communication – offenses which could result in up to four years in jail. At her hearing on Monday, she pleaded not guilty to all charges. She was denied bail and remains in custody.

It wasn’t just what Nyanzi said that got her into trouble, but how she said it.

“Uganda is a very conservative country, so anyone who is not polite, who doesn’t say things in a particular way is going to get a backlash,” said Bwesigye bwa Mwesigire, a Ugandan writer and lawyer, in an interview with the Daily Maverick.

Nyanzi is everything but polite. Her political writing is crude, lewd, sexually explicit and filled with rage. She demands attention, and doesn’t care what niceties she ignores along the way.

Take this, in response to the government’s recent claim to have scrapped the state tax on sanitary pads (a claim which Nyanzi disputed): “Musevenist liars are on a gang-banging spree to rape us again! Their filthy erect penises are this time raping the minds of Ugandans caricatured and conceptualised as too empty-brained to know how taxation processes work in principle.”

Or take this, in which Nyanzi defends her right to criticise those in power: “Why must we either be silent or only rain vain praise on the well-known bandits who repeatedly rape the neighbourhood girls, women, boys, men, chicken, cows, coffee, cotton, co-operatives, constitutions, citizens, civil society… everything and anything worthwhile? Why must I praise these murderers of my people who abundantly steal from the resources of my land and destroy my children’s inheritance of a proud citizenship? No, no, no: let me wash well the shrunken penises and bruised vaginas that have raped Uganda for thirty-one years. As a dobby washes soap and water, I wash with words and punctuation marks.”

But according to the charge sheet drawn up by government prosecutors, it was one particular insult which got her into real trouble. The charge sheet read: “Stella Nyanzi on the 28th January 2017 at Kampala District or thereabout used a computer to post on her Facebook page wherein she made a suggestion or proposal referring to his excellency Yoweri Kaguta Museveni as among others ‘a pair of buttocks’ which suggestion/proposal is obscene or indecent.”

Photo: The charge sheet drawn up by government prosecutors.

The pair of buttocks in question was clearly not impressed, hence the campaign to shut her up. “She’s stretching the limits of freedom of expression, and what the government can allow. But she is also bringing back the tradition of academics as public intellectuals, which is almost dead in Uganda,” said Mwesigire.

Mwesigire noted that while President Museveni is no stranger to crude language himself, he’s not used to being on the receiving end. “The irony is that the president himself uses what they are calling vulgar language, but because he’s the one in power people don’t say it’s rude. But she is using this vulgar language, which has been the language of power, to critique power. She’s using their own language on them,” he said.

Vulgarity has a long history in political resistance, as Nyanzi well knows. She recently posted an article published by writer Amber A’Lee Frost which explored how salacious pamphlets about the sex lives of the French royals eventually helped to unseat them. “One lesson of the French Revolution, then, is that rudeness can be extremely politically useful. There are arguments to be made over who constitutes a valid target, but when crude obscenity is directed at figures of power, their prestige can be tarnished, even in the eyes of the most reverent of subjects. Caricature is designed to exaggerate, and therefore make more noticeable, people’s central defining qualities, and can thus be illuminating even at its most indelicate,” wrote Frost on Current Affairs.

Even in Uganda, radical rudeness has history. In the 1940s, independence advocate Semakula Mulumba responded to the Bishop of Uganda’s dinner invitation with a blistering 18-page letter that castigated the bishop and all that he represented. The letter broke all decorum, and deliberately so: it was part of a campaign to undermine the complicated system of manners and protocol imposed by the colonisers, and adopted by too many of the country’s elite. Mulumba and his colleagues understood that these manners were actually a form of control. As Carol Summers observed in the Journal of Social History, “For Buganda’s activists, the effectiveness and power of civility, manners, and polite institutions meant that disrupting them was an essential prerequisite for true change or popular politics.”

Nyanzi, through her “vulgar” Facebook posts, has retooled Mulumba’s tactics for the 21st century. “She is not afraid of using her own body and sexuality to publicly address and transgress conventions of ‘decency’ and challenge those in power,” said Adriaan van Klinken, associate professor of African Studies at the University of Leeds. Van Klinken and Nyanzi were both research fellows at Stellenbosch last year, and got to know each other well.

“She has been framed by some critics, including the Ugandan government, as a ‘crazy renegade’, but in fact she stands in a long tradition of radical feminist and queer thought in which ‘the personal is political’, in which the body is a site of political protest, and in which sexuality is linked to power. For Stella, such beliefs are not merely intellectual – she is not an armchair queer philosopher – but requires concrete social and political action. This has put her increasingly in a position where she publicly criticises those in power in Uganda, and her recent arrest is a result of this,” said Van Klinken in an interview.

Stella Nyanzi might be rude. She might be vulgar. But if her arrest proves anything, it is that her critiques – and the way she’s making them – are touching a nerve. Being nice gets you nowhere. DM