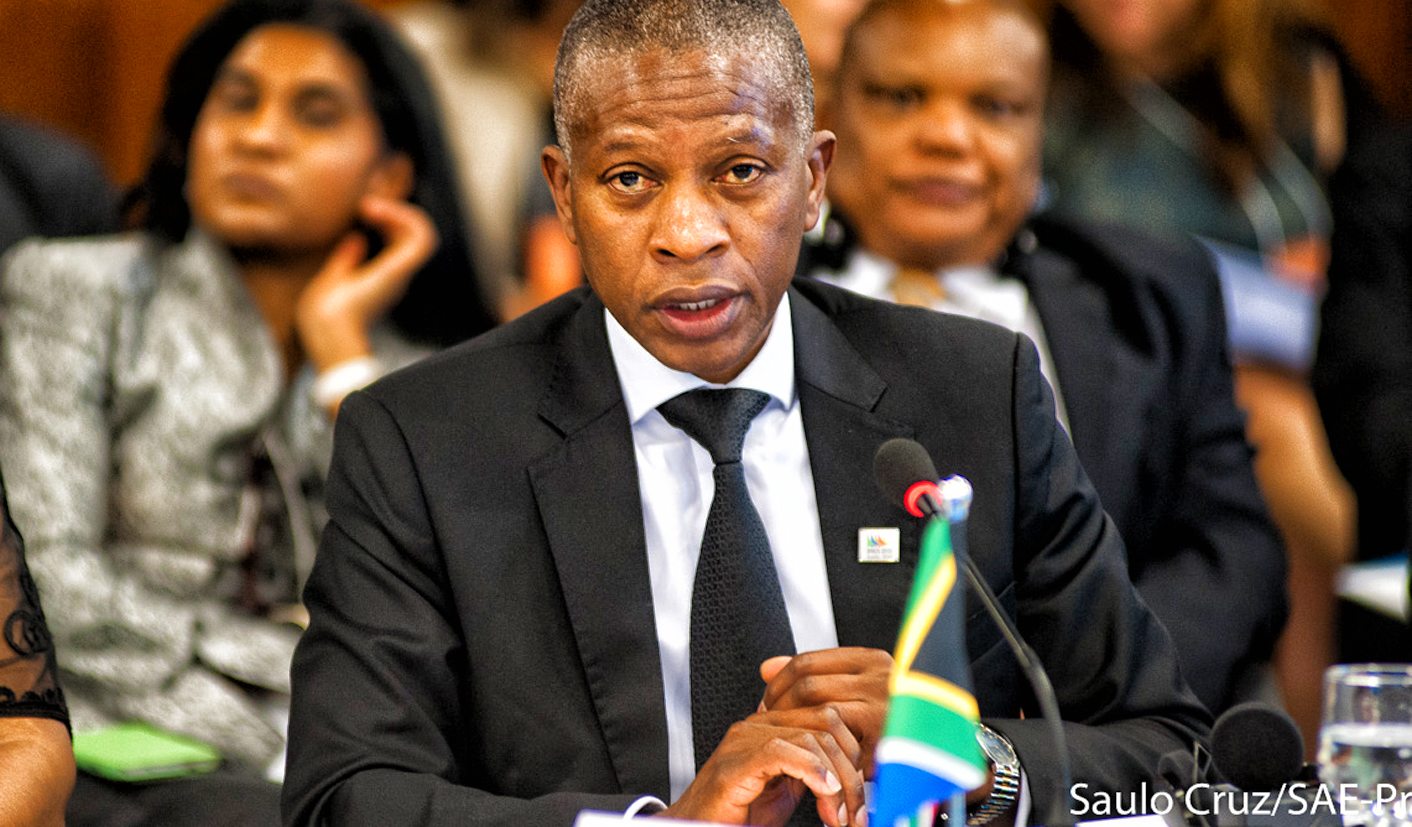 Minister Bathabile Dlamini’s long-time special adviser, Sipho Shezi, has been fired. Shezi was informed of this on Monday, a day after revelations that Dlamini had sent a message to former Social Development DG, Zane Dangor, accusing him and Shezi of conspiring with Sassa CEO Thokozani Magwaza and a former lover of the minister’s of attempting to extort money from businessman Lunga Ncwana. Ncwana, who is a close friend of Dlamini’s, is linked to CPS/NET1’s original dodgy BEE deal as well as a R85-million cash payout and 12.5% share in CPS to businessman Brian Mosehla in a 2013. By MARIANNE THAMM.

A week before the Constitutional Court ruling on March 17 this year that Minister of Social Development Bathabile Dlamini, as the individual who holds executive political office, had been responsible for the Sassa social grants crisis, Sipho Shezi publicly stated that he believed that the head of the minister as well as other officials “had to roll”.

Speaking on March 10 to EWN reporter Kgomotso Modise about the crisis, Shezi said “if somebody had to ask me now, as the special adviser to that minister, whose head must roll, under the circumstances, I would actually say ‘yes, my minister’s head might also have to roll, I am not sure. But before my minister’s head rolls, in this case, I would say that the head of both previous administrators and current administrators, if they have not done what they were supposed to do, their heads must roll.”

Instead, on Monday, Shezi confirmed to Daily Maverick that he had got the chop. He said his contract with the department and the minister allowed for her to give him one month’s notice and declined, at this stage, to provide reasons for the sudden rupture of a long-standing relationship.

Shezi, who played a critical role in attempting to support key officials during the manufactured crisis, was named in a message Dlamini sent to former Department of Social Development Zane Dangor, who resigned on March 4 after a breakdown in his relationship with the minister with regard to the extension of the contract with CPS.

The message, which Daily Maverick has confirmed, was sent on March 8, a day after Dlamini had made a shambolic presentation to Parliament’s Standing Committee on Public Accounts (Scopa). It read, “You and Sipho have been used by Magwaza [Sassa CEO] who is a friend to my former boyfriend who wanted to extort money from Lunga and could not.” The Sunday Times at the weekend reported that the minister’s former “boyfriend” is a man identified only as Cessaro, an intelligence official.

Ncwana, who once channeled funds from disgraced Brett Kebble to the ANC, is a mutual friend of Dlamini and Brian Mosehla who scored R85-million in cash and a 12.5% share in CPS in a 2013 deal after CPS’s originally listed BEE partners had been dumped. (For the full extent of the how the deal went down read Craig McKune’s brilliant amaBhungane investigation here.)

On Friday Magwaza filed an affidavit with the Constitutional Court in response to Dlamni’s earlier affidavit blaming Sassa officials for the crisis. In an earlier letter to the court seeking permission to file the affidavit, Magwaza suggested that the minister had lied.

In his court papers the Sassa CEO said that Dlamini had deliberately derailed Sassa’s plans to take over the grant payments from CPS by appointing work streams that would report directly to her while bypassing Sassa’s own implementation processes.

The individuals who headed up these influential work streams were drawn from an earlier advisory committee that had been hand-picked by Dlamini. The final cost of the work streams to Sassa was R45-million.

It was also Dlamini and a few of her anointed advisers, including her legal advisor Tim Sukazi, who had pushed for a new contract to be negotiated with CPS. Dlamini had informed Magwaza, he states in his affidavit, that the work streams would be working out plans for future in-house payment of the grants and that Sassa should essentially butt out.

Magwaza, who had been appointed to the job in November, had approached Treasury and other key potential players in the new plan, including the Post Office and the South African Reserve Bank, but Dlamini had been opposed to this potential solution to a looming and catastrophic crisis.

“In retrospect it was the minister who determined that an internal solution would not be found,” said Magwaza in his affidavit. He added that he could not understand why the minister was adamant that CPS be used. He also said there was also no record of Dlamini engaging with Sassa to consider options other than CPS.

Details of the full and unseemly picture behind the Sassa social grants scandal and its nerve centre are sure to be exposed in the continuing fallout of the crisis, Dlamini’s attrition of staff who dared to question her as well as the ConCourt’s expected ruling on whether she is personally liable for the legal fees incurred in the application brought by the Black Sash.

What we do know is that President Jacob Zuma’s lawyer, Michael Hulley, has been involved in the process, at least from December last year, but it is not known in which capacity. Dlamini does not, in her affidavit, make any reference to Hulley.

Dlamini’s woes continued on Monday when it was revealed in reply to a parliamentary question by the DA that the Department of Social Development had paid for a trip to Addis Ababa in January this year which coincidentally coincided with ANC party business, the launch of the ANC Women’s League task team and young women’s desk in Addis.

The trip resulted in Dlamini missing a crucial portfolio committee meeting where she was due to update MPs on Sassa and her department’s progress and readiness in taking over the payments of social grants from CPS.

The DA’s Shadow Minister of Social Development, Bridget Masango, said that photographs and media reports of Dlamini’s trip indicated that she attended several events in her capacity as Chair of the ANCWL “despite her representatives claiming she was there on official state business”.

“When 17-million poor and vulnerable South Africans were unsure whether they would receive their social grants on time, the minister ignored their plight in order to attend to official ANC business,” said Masango.

It was further revealed on Thursday last week that the Department of Social Development had spent over R116-million on travel during the 2015/16 financial year. Replying to a question by the DA’s Tim Brauteseth, Dlamini replied that the department had spent R105-million on local trips, and R16-million on international trips, including a two-week trip to New York in April 2015 for a UN commission on population and development. Dlamini spent R92,000 on accommodation during that trip.

Other international destinations included in the 44 trips are Zimbabwe, Ethiopia, the UK, Brazil Canada and an additional trip to New York in June.

Replying to further parliamentary questions by Brauteseth, Dlamini revealed that Sassa had entered into contracts with various information and communication technology service providers, tallying over R1-billion, and that the agency would spend around R1.18-billion on 27 different ICT contracts that will run for between two and five years.

Meanwhile, the DA has also said it will approach the Public Protector, Busisiwe Mkhwebane, to investigate allegations of an improper relationship between Dlamini, Ncwana and CPS.

The CPS/Sassa social grants crisis has preoccupied and taken centre stage at several Scopa hearings and the agency has yet to account for the over 462 cases of irregular expenditure as of March 2016 and which adds up to a monumental R1-billion.

Dlamini, a Minister the Constitutional Court flamed-grilled in its judgment with regard to her role in the CPS/ Sassa social grants political own goal, managed unsurprisingly to survive President Jacob Zuma’s midnight Cabinet reshuffle earlier this month.

With Shezi out of the way, the department is now effectively being run by Sassa’s legal consultant, Tim Sukazi, and acting Director General, Wiseman Magasela, who has also acted as an adviser to Dlamini and as acting Sassa CEO (when Magwaza took ill during the crisis).

As each legal lasso tightens around Dlamini, one suspects that not so smallanyana skeletons will soon come tapdancing out of the shadows but she is bound to demand more heads before her own will be served on a platter, probably in court. DM