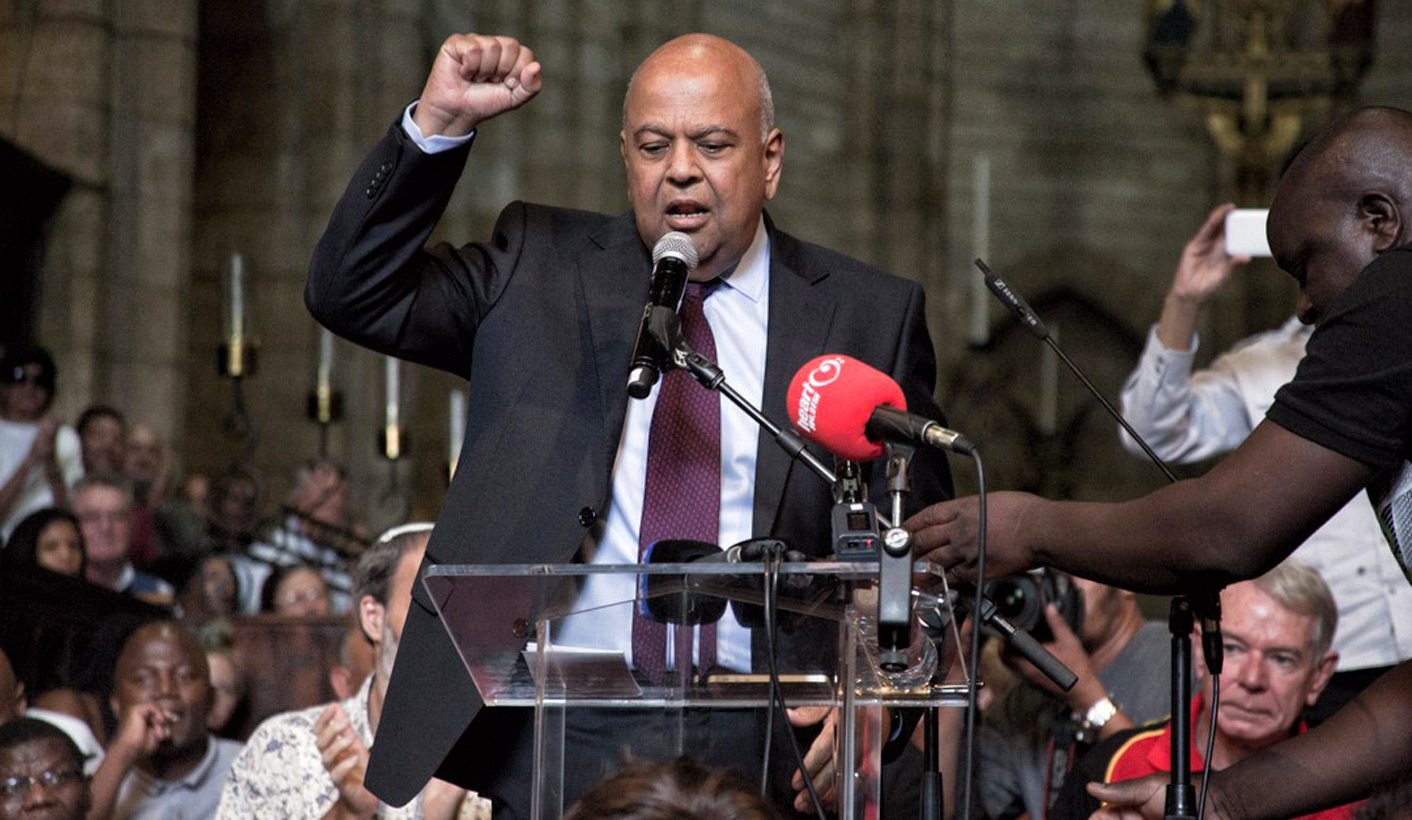 Pravin Gordhan took a step back from his firebrand calls for mobilisation and used Ahmed Kathrada’s Cape Town memorial to evoke the socialist values of the African National Congress. By ANTOINETTE MULLER.

Ahmed Kathrada sent another message from beyond the grave at his Cape Town memorial on Thursday. While it was not as politically charged as previous events have been, the message was as important: at the core of South Africa’s liberation movement remain socialist values which every single citizen of the country should adopt.

For much of the proceedings, barring one ANC member getting booed off stage, the atmosphere inside the church was electric and filled with hope, despite the seeming chaos that the country finds itself in.

While attempts to form a “human chain” form outside Parliament to run alongside the 800m that snake around to St George’s Cathedral ended up being more of a broken bracelet, the atmosphere outside the church was different.

A small, but vocal, group of protesters had gathered on the steps, singing and dancing and drowning out the shrill chants of “Zuma Must Fall” with a more effervescent version.

And while the main purpose of the gathering was to remember one of South Africa’s most loved members of the liberation movement – and religious leaders from across the spectrum paid due tribute – things are never straightforward in a complex society like South Africa.

Even the religious tributes carried a glimmering – in varying hues – of political slants.

Gordhan had earlier arrived to ululation, singing and a standing ovation. And as speakers of the day began stoking the fire with an almost universal message of “Zuma must go”, appreciated by those who had gathered, it was obvious that most who had turned out were here to see Gordhan.

As photographers clambered for their money shot of the now unemployed former minister, the singing continued in the church.

Gordhan stood stoically as he was welcomed to the stage. In another life and even in this one, you’d be forgiven if you mistook him for a president. His speech at the memorial was not quite as firebrand as it had been at his outgoing press conference, but the message was the same: The ANC of Kathrada, Nelson Mandela, Oliver Tambo, Walter Sisulu and other fallen comrades is not the ANC we are seeing today.

Gordhan opened his address by saying that as dark clouds gather on the horizon, “we turn to figures like Uncle Kathy to help us understand these clouds”.

His keynote addressed focused heavily on the vast inequalities that remain in South Africa after centuries of colonial oppression, but he urged for unity to “speed up the process of the vision of the national development plan” and urged “remembering what it is to be selfless… because we have grown in the last years into a consumerist society, where everything is about me and mine, not us and ours,” he said.

He maintained his decorum and urged that the values of democracy be remembered, especially in the South African context, seemingly taking a swipe at the rogue Cabinet reshuffle which was heavily criticised for “failing to consult”.

He labelled “radical economic transformation” as a “populist” slogan, but said there was some truth to it in helping to “get to the root of the problem”, but warned that populist slogans should not just benefit a few.

“Attend to the problems of inequality with far greater urgency, otherwise you will have far greater problems; the abuse of the plight of ordinary poor people through populist slogans.”

The socialist theme was continued when he said: “Kathy would say social justice should become ‘part of the genetic make-up’ of every single citizen of South Africa”.

“All of us should be upset if a single child goes to bed hungry at night. All of us should be upset if children still study under trees when we know that there is money available in today’s Budget to have schools built. But if a R30-million or R35-million school is going to cost R100-million, because somebody wants to pocket the other R60-million, we won’t get there,” Gordhan said.

He said the focus of “millions more people” should shift to the “abuse of state resources”. Seemingly referring to the resignation of a number of ANC MPs, he said that the country runs the risk that “honest people don’t want to participate in government institutions any longer” and “nor will they soon want to participate in representative organisations like Parliament”. He warned that “when society reaches that point, then you know we’ve handed the state over to a bunch of gangsters”.

Gordhan ended by saying that South Africans should not give up hope and should remember what it means to “defend democracy”.

“Don’t remain an elitist group of activists. Go reach out on a street-by-street basis so that they can be participants in the events of history.

“Be engaged, not by sitting on the couch and watching television. Be involved, care about the country and where it is going so that you can give your expertise, your resources and your energy to ensuring that further bricks are laid in the bricks of democracy which will take many, many more years.”

The services where Kathrada has been remembered have been heavily political, but the late Struggle hero surely would not want it any other way. DM