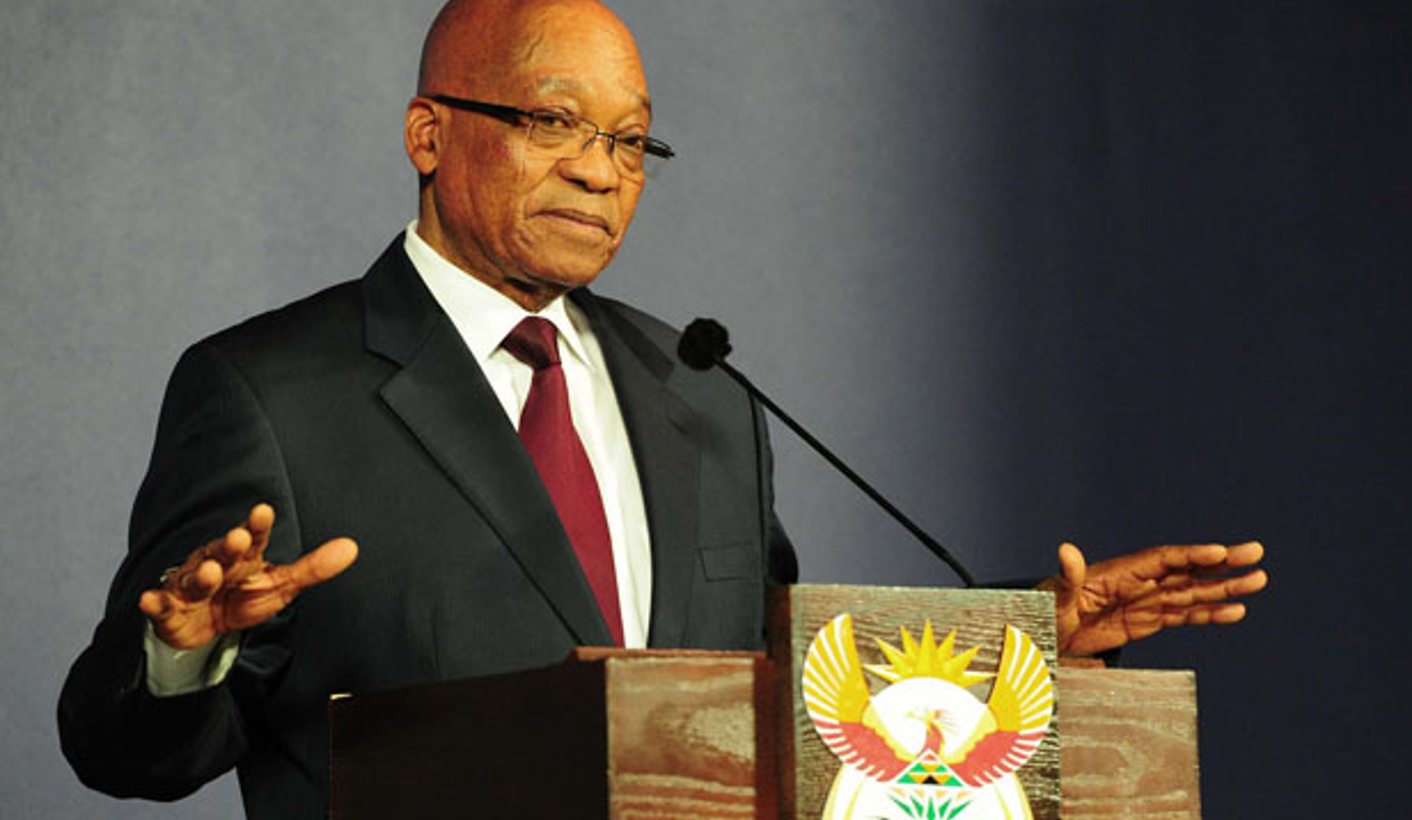 Is SA’s labour policy more about making business do penance for its past sins than addressing poverty? By Peter Fabricius for ISS TODAY.

Capitalism – the politically unmentionable – is the only force that can save South Africa from a looming economic catastrophe. But this salvation has become ever more imperilled as the free market system gets caught in the crossfire of President Jacob Zuma’s bitter struggle to remain in power in the ruling African National Congress (ANC) and the country.

The ANC and South Africa face another Rubicon moment on 18 April when Parliament votes on a motion of no confidence in Zuma’s government. It will only take a little over 50 of the ANC’s comfortable majority of 251 (out of 400) MPs to help the opposition carry the motion and end Zuma’s political career.

Such a defection was unthinkable a week ago. But the disaffection against Zuma has reached such a pitch that a successful vote of no confidence now looks possible, if only remotely so.

Zuma brought the crisis to a head by firing his widely respected finance minister Pravin Gordhan and his deputy, Mcebisi Jonas at midnight on 30 March after levelling trumped-up charges that they were conspiring with international investors to topple him and take control of the economy.

This “midnight massacre of ministers” – as former US ambassador to South Africa Patrick Gaspard tweeted – was part of a major Cabinet reshuffle designed, Zuma insisted, to accelerate his campaign of “radical socio-economic transformation”.

But only his most devoted supporters bought that line. The rest suspected Zuma had got rid of Gordhan because he was thwarting the final move in “state capture” by blocking access to the Treasury by Zuma and his business cronies, the Gupta family. Gordhan was replaced by a financially inexperienced Zuma loyalist with Gupta links, Malusi Gigaba.

The international credit rating agency Standard & Poor’s Global immediately carried out the downgrade of South Africa’s sovereign debt to junk status — which Gordhan had been trying so hard to avoid. The other rating agencies were poised to follow suit.

The rand and the Johannesburg Stock Exchange fell, prompting a huge upswell of demands for Zuma to stand down. Those calling for his head included even the ANC’s two alliance partners, the Congress of South African Trade Unions and the South African Communist Party, as well as veterans and stalwarts of the liberation struggle.

Zuma mounted a strong fightback, mobilising the ANC’s national working committee – strategically reinforced by provincial premier loyalists – to back his Cabinet reshuffle and to force Ramaphosa, Mantashe and Mkhize to apologise.

And so the terrain of this monumental struggle for the heart and soul of the ANC moved to Parliament for that decisive vote on 18 April.

The ANC’s caucus has become increasingly independent and critical of Zuma. But whether 50-plus MPs will put their careers on the line is a moot point. The danger is that expectations are being raised, as they were in 1985, and so the negative reaction – including from international markets – could be magnified if Parliament fails to oust Zuma. And this comes at a time when South Africa’s dependence on capital inflows to finance its debt and fiscal deficit has never been greater.

Jakkie Cilliers, chairman of the Institute for Security Studies’ Board of Trustees, hears disturbing echoes of August 1985 when apartheid South Africa’s hard-line President PW Botha delivered a speech which his aides had promised would carry the embattled country across the Rubicon. Botha would release ANC hero Nelson Mandela from prison and begin democratic reforms.

Instead the finger-wagging Botha dug in his heels. The rand plunged against the US dollar and capital – already scarce because of sanctions – poured out of the country, forcing a foreign debt default.

Cilliers notes that South Africa’s debt burden before the default was about 40% of GDP. It is now around 50%.  South Africa has run out of options. Greater economic freedom is literally the only remaining pathway through which to improve livelihoods,” he says.

Ann Bernstein, executive director of Johannesburg’s Centre for Development and Enterprise (CDE), agrees. Speaking at a CDE seminar last week on the topic How Can Capitalism Deliver for Everyone in South Africa?, she recalled how the adoption of the free market, especially in countries like China, had radically reduced poverty. In 1970, 60% of a world population of some 3.7-billion was poor. By 2013, poverty had been reduced to just 10% of a much larger population of 7.3-billion. From the late 1970s when it moved to market dynamism, China itself had reduced its poor from 90% to 10%, lifting 750-million out of poverty to date.

But in South Africa a toxic and incongruous mix of strong anti-business sentiment and crony capitalism was preventing South Africa from taking the same route to lift some 18 to 27-million of its people out of poverty – 35% to 55% of the population – depending on how one defined poverty, she said.

Bernstein supports the government’s efforts to mitigate poverty through welfare measures like social grants. But she believes the only way to really beat poverty is for policymakers to develop a single-minded focus on rapidly accelerating economic growth – now stagnating at 1% – to create jobs for South Africa’s 9-million unemployed.

That would require tough policy choices, mostly to ease the government’s rigid labour policies which now make it impossible to employ unskilled labour. “No wage is better than a low wage” is now the government’s mantra.

Two important policy changes would be to allow business to pay lower wages – including scrapping the recently agreed minimum wage and to import more foreign-skilled workers. These would stimulate manufacturing, boost growth and create millions of jobs.

Bernstein asked why the government itself was the only employer allowed to pay low wages, noting that it was paying people just R82 a day to participate in its Expanded Public Works Programme.

Bernstein shared the podium with Joel Netshitenzhe, executive director of the Mapungubwe Institute for Strategic Reflection. That’s hardly a pro-capitalist institution, yet he agreed with Bernstein that South Africa should now be urgently positioning itself to take advantage of the estimated 85-million low-wage jobs which China is “off-shoring” as it moves up the value chain.

His caveat was that such low-wage manufacturing should be ring-fenced within economic development zones to protect workers who already had “decent” jobs. But there is no sign that the government is prepared to abandon its insistence on “decent” jobs, even within its special economic zones.

Netshitenzhe’s defence of the recently agreed national minimum wage gave a clear hint of why the South African government balks at making the policy choices Bernstein was advocating. He suggested business should support the minimum wage to show “empathy” because it had been colonialist and racist in the past – “and still is to a degree”.

In other words, he seemed to imply that labour policy today is more an emotional and moral imperative about business redeeming its past sins, than it is about helping to address the current plight of the masses of poor, almost exclusively black South Africans.

FirstRand chairman Laurie Dippenaar recounted at the seminar how he had asked the eminent Harvard economist Ricardo Hausmann why he had never mentioned the word “capitalism” in his quite clearly pro-free market address to the CDE recently.

“Because it’s a conversation-stopper,” Hausmann replied. Indeed. And it’s likely to remain so, even if Zuma falls, with his radical socio-economic transformation banner, on 18 April. DM

Photo: President Jacob Zuma during a press briefing after a meeting with the National Planning Commission at the Union Buildings in Pretoria in July 2013. (Photo: GCIS)