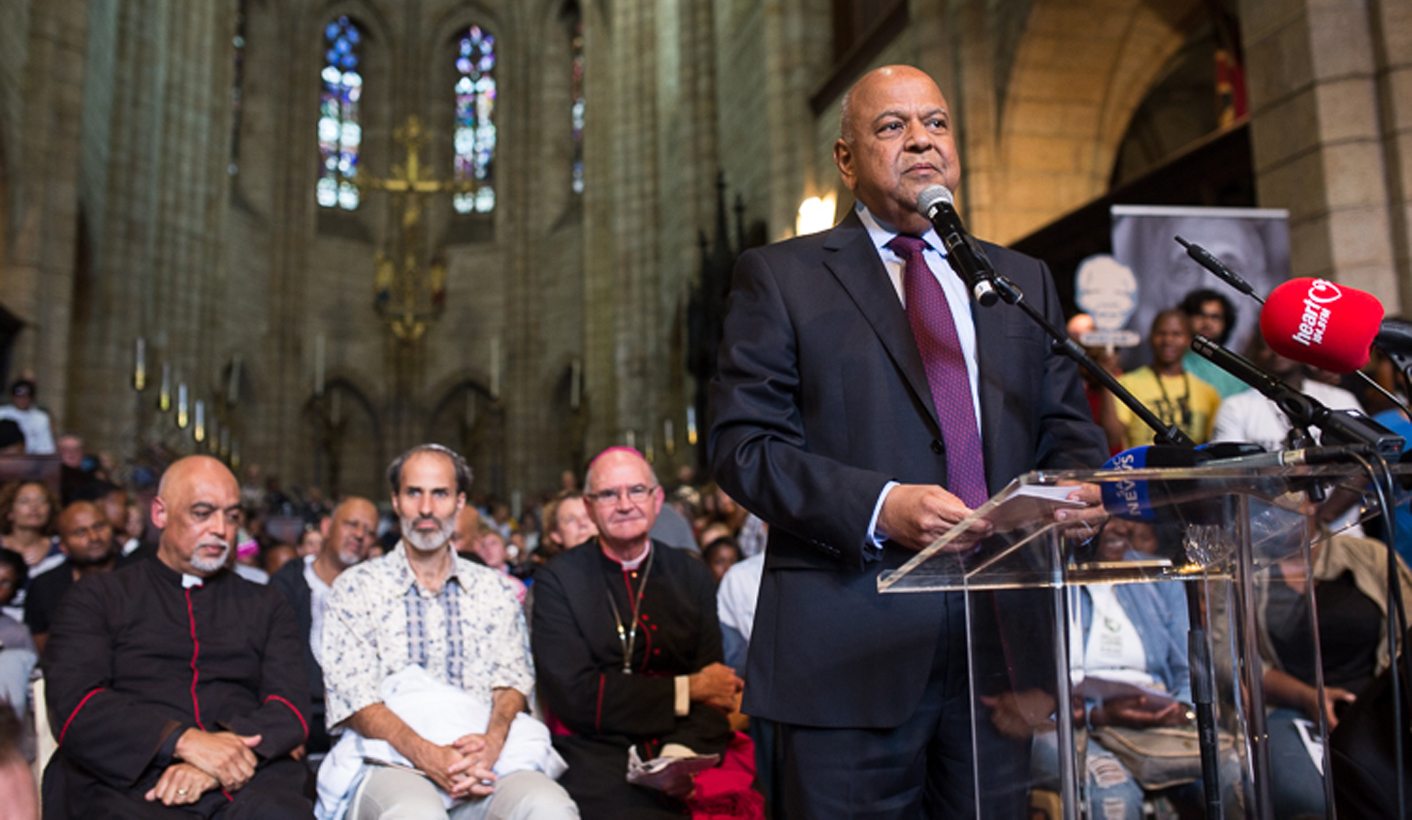 Ten years ago, who could have predicted that the death of an anti-Apartheid hero would become the catalyst for the repeated expression of discontent with South Africa’s government? The memorials for Struggle stalwart Ahmed Kathrada have served as a platform countrywide for the mobilisation of opposition to current ANC leadership. On Thursday, the travelling political roadshow reached Cape Town’s St George’s Cathedral. By REBECCA DAVIS.

Cape Town’s memorial for Ahmed Kathrada was a memorial pretty much in name only. As was the case with its counterparts in other South African cities, what took centre stage was less the specific memory of the deceased Kathrada and more the spirit that Kathrada expressed in the open letter he wrote to President Jacob Zuma last year, calling on Zuma to resign.

Speakers drawn mainly from civil society deposited a laundry list of grievances at the feet of ANC leadership: rape; student fees; Nkandla; township sanitation; the lack of sexual offences courts; and the nuclear deal. Particularly the nuclear deal. Concerns about the secretive nature of the proposed nuclear build, and its cost, were raised by speaker after speaker.

Mainly young activists, the speakers addressed the ruling party without mincing their words.

Equal Education’s Tsepho Motsepe was yet more targeted in the focus of his criticism. Motsepe expressed support for axed deputy Finance Minister Mcebisi Jonas, telling Jonas that the public believed that he was telling the truth when he said he had turned down a massive bribe from the Gupta family. Motsepe said  when it came to the nuclear deal, “We will not be the customers of Khulubuse [Zuma]!”

One message ran through it all like a golden thread: Zuma must go. SA 1st Forum’s Hazel O Shea called on President Zuma to step down “to allow for leaders with integrity to take office”. Health activist Vuyiseka Dubula was spitting fire: “This is not Zuma’s country, this is our country!” Dubula yelled. Phumeza Mlangana, of the Social Justice Coalition, called on the ANC and its MPs to recall the president. “You need to prove to us you are really leaders,” Mlangana said.

Against this backdrop, who’d want to take to the speaker’s lectern to defend the ANC? Nokuthula Xaba had drawn the short straw, but she didn’t last long.

“I appreciate [it] about the speakers when they say, ‘we do not hate the ANC,’” she began. The crowd already seemed dubious as to where this was headed.

“It’s not the ANC who has created this mess, it’s individuals!” Xaba continued. And instantly faced a wall of booing so loud that she could continue for only a few lines further.

The South African Communist Party’s Jeremy Cronin, by contrast, was clearly not in the mood to heed ANC Secretary General Gwede Mantashe’s warning earlier this week that it was a mistake for individual figures to air their grievances in public. Cronin was unrepentant, repeating the SACP’s belief that Zuma should step down, and reiterating the party’s dissatisfaction with the lack of justification given for Zuma’s axing of Finance Minister Pravin Gordhan.

If the reason was indeed the “irretrievable breakdown” of relations between Zuma and Gordhan, then Cronin said the public deserved to be told what had caused such a breakdown. If it was related either to the nuclear deal, or to the Gupta family’s attempts to preserve their bank accounts, this was unacceptable.

Further, the Gupta family should have their citizenship revoked, Cronin said, and a full judicial inquiry into relations between the Guptas and Cabinet ministers needed to take place.

Cronin was speaking to the choir, but there was really only one person who the crowd was there to see. Pravin Gordhan’s status seems to grow by the day. Flanked by axed Tourism Minister Derek Hanekom – who Gordhan later referred to as his fellow “unemployed” comrade – the former Finance Minister entered St George’s Cathedral to a hero’s welcome.

Yet if the audience hoped for further direct criticism of President Zuma and ANC leadership from Gordhan, they might have left disappointed. While drawing a distinction twice between “Mandela’s ANC” and the current ANC, Gordhan nonetheless kept his address measured.

Appropriately, Gordhan placed Ahmed Kathrada at the centre of his address, repeatedly returning to what Uncle Kathy would have wished for from the country and its future direction. Gordhan also concluded by expressing his ongoing commitment to the ruling party: “I am saying all of this as an ANC cadre,” he stressed. Gordhan said that there were “millions of activists” around the country who, like him, were confident that the ANC of Ahmed Kathrada would emerge once more.

That’s not to say that Gordhan didn’t allow hints of snark to occasionally penetrate his speech. He wryly referred to the last 15 months as “tough”. Gordhan called for a “roll of dishonour”, so that the country can be informed “who is working against 55 million people”. He also urged South Africa to not be too disheartened by its economic downgrade – but added: “We didn’t need the downgrade, by the way, if we just behaved ourselves. But that’s another matter.”

With Gordhan’s words complete, the audience – which included religious leaders and off-duty MPs – spilled on to Cape Town’s streets after the singing of the national anthem.

In case the audience in St George’s Cathedral had been getting too cosy, however, student activist Hassan also had a warning for them. “Be more consistent,” she said. “One march is not going to save South Africa.” DM