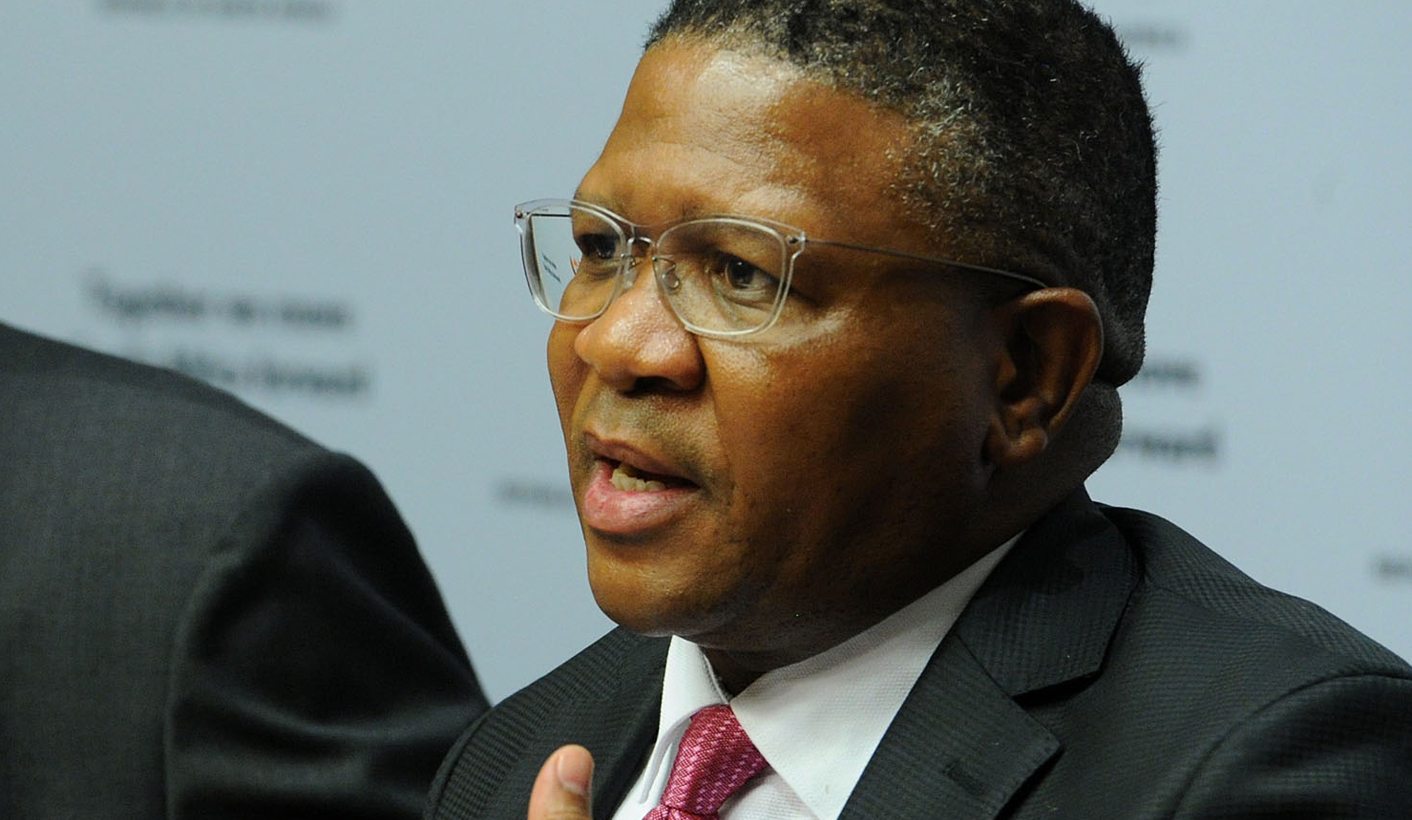 Fikile Mbalula offered an indication as to where he would take the SA Police Service on Tuesday. When he wasn’t making jokes, he offered platitudes on tough policing. They haven’t worked before and the new minister has much to learn. By GREG NICOLSON.

Despite attempts to distance himself from his reputation, Fikile Mbalula on Tuesday introduced himself as the country’s new police minister in typical “razzmatazz” style. He said cops should be able to run the Comrades Marathon while working in an environment with “a bit of a vibe”.

“Criminals think that OR Tambo is Sandton complex, where they go up and down like K-Ci and JoJo. They do as they wish,” said Mbalula, speaking at the police welcoming parade at the SAPS training college in Pretoria. It was his first major address since being appointed police minister by President Jacob Zuma during a Cabinet reshuffle late on Thursday night. Touching on his previous post as minister of sports and recreation, Mbalula joked that Bafana Bafana should be arrested for the team’s poor performances.

The new police minister is populist and charismatic and, replacing former minister Nkosinathi Nhleko, his address bounced between jokes and the seriousness of crime in South Africa. As the SAPS continues its demilitarisation process, he called for a harsh crackdown on criminals, raising fears that he might be endorsing “shoot to kill” policies that have already been tried and discredited.

Mbalula said Zuma told him on his appointment, “Minister, mobilise our people working with the police service to fight and defeat crime in our country.”

“Not a complicated and sophisticated message,” he added. The ANC has recently said it will focus on using community policing forums to combat crime.

The new minister took it a step further. “We are not going to be soft in fighting crime and dealing with criminals. Simply put, our relationship with criminals is chalk and cheese,” he said. “Anyone who kills a policeman will meet fire with fire. No police officer will die in vain.

“I don’t want to use that word, ‘Shoot and do whatever’, but I’m saying we use fire with fire. You are not given those guns as toys. You are given those guns to use them to protect the nation and protect yourselves,” he told police officers. He said police officers shouldn’t shoot suspected criminals indiscriminately but emphasised the use of force. “The criminal comes with a gun and a grenade to you. Fight back, fire with fire… Tooth for a tooth, nail for nail.”

Mbalula’s comments reflect those made as deputy minister of police in 2009 when he said “shoot the bastards”. They could be interpreted as an endorsement of both government and, in particular, former police commissioner Bheki Cele’s militarisation of the SAPS, which led to police acting more as a force than a police service.

“We must not smile with heavily armed and dangerous criminals. We must nail them. We must be merciless. The [SA] Human Rights Commission will find us on the way,” said the minister on Tuesday.

Gareth Newham, head of the governance crime and justice division at the Institute of Security Studies, said Mbalula is known for his flamboyant language and was taking up his post trying to mark his arrival. He was trying to garnish political and public support by acting tough on crime. He said, however, that there should never be a separation between human rights and policing. The minister needs to ensure he’s careful to make statements blending the public and criminals together, said Newham.

“The issue is that the police should never, ever be dealing harshly with anybody,” said Newham, emphasising how they must react with minimum force. Cops must be fair and professional in dealing with criminals and cannot move towards apartheid policing tactics, which will not help reduce crime.

Mbalula also warned protesters, referencing, as an example, those who burnt schools in Vuwani and the student movement. The right to protest is enshrined in the Constitution, but anyone who attacks public infrastructure will be dealt with harshly, he said. “We will not allow you to destroy property. Rule of law, rule of law, rule of law must prevail.

“If they don’t stop we’ll stop them, because the Constitution doesn’t say we must stop people who are protesting, even those who are now in the streets saying that, what they like, but nobody has a right to burn the grass in the name of protest. We must educate them.”

Mbalula appeared to be speaking without a prepared speech.

Sherilyn Naidoo from the Centre for Applied Legal Studies right to protest unit, based at the University of Witwatersrand, said, “Essentially everyone has the right to protest and protest should be done peacefully.” She said it’s a crime to protest violently, but the police response should be proportionate.

Naidoo said, “We feel that the police do not know how to deal with protests adequately.” There was no communication, a lack of professionalism and procedure. It makes Mbalula’s suggested crackdown even more concerning. For protesters planning to gather this week, she noted that the Regulation of Gathering Act requires a notification procedure that should be submitted a week before a planned protest, but which can only be denied due to public disruption, such as interrupting traffic, or the potential of violence.

Mbalula’s speech on Tuesday was devoid of such nuance. He neglected to refer to the many initiatives aimed at reforming the police service and focused on a tough-on-crime approach that hasn’t worked in the past. When he wasn’t delivering platitudes on strong policing, he was making jokes. DM