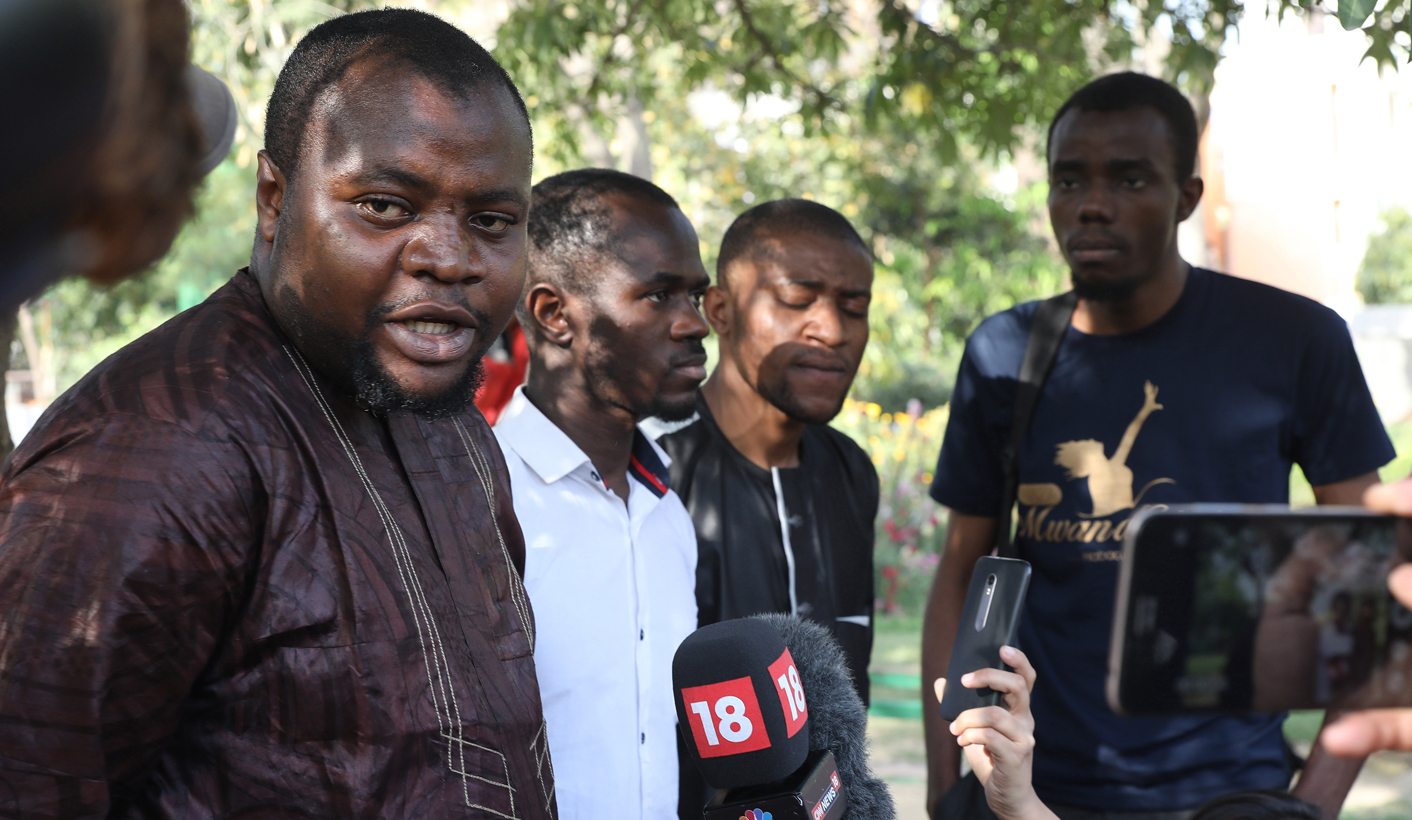 A recent spate of racist attacks on African students in India has once again drawn attention to the subcontinent’s serious racism problem. By SAMIRA SAWLANI.

“It’s racism, and calling it anything but that is both insulting and dishonest; I have been to London, Kuala Lumpur, Stockholm and Amsterdam, never have I experienced the type of discrimination I do here.”

These are the words of New Delhi-based student Rita M, a young Ugandan woman who says she has faced extraordinary levels of racism in India: both overt, in the form of verbal abuse by strangers on the streets, and more subtle manifestations, like being turned away by landlords when looking for a place to live, or not being served at restaurants. She and her other black friends have grown accustomed to the heckling aimed at them as they walk down the street. They are often referred to as “bandar” (monkey) or “bhoot” (ghost/demon).

On 24 March 2017, Manish Khari, a 19-year-old student based in Noida, New Delhi, went missing. His fellow residents at the NSG Black Cat Enclave Housing society were convinced that he had been eaten by five Nigerian students and subsequently barged into their home to search their fridge.

The following day Khari’s body was found. The alleged cause of death was a drug overdose. Then came the next accusation: that Khari had been drugged by the same five Nigerian students. The Nigerians were arrested (although they have been subsequently released).

This incident prompted a spate of racist attacks: four Nigerian men were attacked at a mall in Noida, reports circulated of a Kenyan woman being dragged out of a rickshaw and beaten, while posters advocating “A Nigerian-free Noida” appeared in the area.

These attacks did not go unnoticed. Many Indian users on social media came out in support of the Nigerians; the African Union released a statement condemning the attacks; the Nigerian government summoned the Indian ambassador to explain the actions of his countrymen, and India’s Minister for External Affairs ordered a “fair and impartial investigation into this unfortunate incident”.

Racism towards Africans and black people is nothing new in India, with numerous incidents recorded.

In November 2013, a Nigerian national, alleged to be a drug dealer, was found dead in Goa. Signs were plastered around town saying, “Say no to Nigerians, Say no to Drugs”, while Goa state Minister Dayanand Mandrekar referred to Nigerians as being like “a cancer”.

In 2012, weeks before the horrific rape of a young woman in Delhi which brought India to its knees, a Rwandan woman was gang raped in the same city. This story filled a few column inches in local newspapers but was soon forgotten about.

On 15 January 2014, Delhi Minister for Law Somnath Bharti, accompanied by a group of men, illegally raided a property which housed a number of women from Uganda and Nigeria. The minister claimed that he had received complaints that these women were part of a drugs and prostitution racket. Two of the Ugandan residents alleged that Bharti and his men had harassed, groped and beaten them; told them they should leave India and made them urinate in public in order to test them for drugs.

In February 2016, a Tanzanian student’s car was set on fire by an angry mob who went on to rip off her clothing and brutally assault her in the middle of the street. Her crime? Being black, just like the Sudanese man that had allegedly been involved in an accident in which a pedestrian was run over that same day.

There are many more examples of these types of attacks along with the everyday micro-aggressions which African nationals in India face daily.

Yet despite evidence of an array of acts of violence where African nationals have been targeted, the government of India has refused to brand these as being racially motivated or a result of Afrophobia.

As recently as 2016 during another spate of attacks on Africans, the Minister for External Affairs argued that “these were not premeditated acts against a particular community, rather these were spontaneous attacks perpetrated by anti-social and criminal elements”.

It is ironic that a government whose own nationals have been the target of racially motivated attacks in other parts of the world (such as the recent murder of 32-year-old Srinivas Kuchibhotla in Kansas and the 2014 attacks on students in Australia) chooses to remain in such a state of denial.

Yet, in a country where oppression, prejudice and discrimination exist on a myriad levels including gender, class, religion and caste, it is no surprise that for some, racial violence against black people is seen not to exist, despite manifesting in a manner so brazen.

Anti-blackness in India has a long history, much of it a hangover from British colonialism. While initially colour was a form of classification within the caste system whereby the light-skinned Aryas were seen as superior to the darker skinned Dasyas, it was the arrival of the British which led to the creation of a system where Eurocentric ideals became the norm, fair skin seen as the ideal and thus associated with superiority, while dark skin was associated with all that was ugly and barbaric.

As Suhash Chakravarty wrote in The Raj Syndrome: A Study in Imperial Perceptions: “The legacy of colonialism perpetuated a national identity of subordinate Indians which still today expresses itself through images of whiteness as superior to darkness.”

While a system was created whereby whiteness was associated with beauty, wealth and a higher social status, a result of this was greater disdain for “dark skin” which has contributed to racist attitudes towards black people.

Historically, relations between India and Africa date back centuries. Both prior to and during colonialism Indians arrived or were shipped over as slaves, traders and merchants, and there remains a huge presence of the Indian diaspora across the continent, particularly in Kenya, Uganda and South Africa.

One of India’s most famous citizens in Africa was Mohandas Gandhi, employed as a lawyer in South Africa. He lived there for 21 years. Early on, Gandhi experienced first-hand the realities of apartheid: after being thrown out of a “whites only” train carriage, he fought staunchly for the rights of his fellow Indians.

While this gained him many admirers, at that time his support did not spread to that of the rights of Africans. In fact, quite the opposite happened, leading to the assertion that Gandhi himself was racist.

In an open letter to the Natal Parliament in 1893, Gandhi wrote: “I venture to point out that both the English and the Indians spring from a common stock, called the Indo-Aryan … A general belief seems to prevail in the Colony that the Indians are little better, if at all, than savages or the Natives of Africa…with the result that the Indian is being dragged down to the position of a raw K*****.”

Other quotes attributed to him in the controversial book The South African Gandhi: Stretcher-Bearer of Empire, include: “Mixing of the K***** with the Indians, I feel most strongly. I think it is very unfair to the Indian population.”

And: “We were marched off to a prison intended for K*****. We could understand not being classed with the whites, but to be placed on the same level with the Natives seemed too much to put up with.”

While some such as E.S. Reddy argue that later in life Gandhi’s views changed and he reformed, these belief systems have seeped into other spheres of Indian society such as popular culture and the film industry, which writer Dhrubo Jyoti argues “continues to peddle regressive stereotypes about people with darker skins”, meaning “Africans will continue to be seen as the quintessential ‘other’”.

This racism also exists among the Indian diaspora in Africa.

A supermarket employee in Kampala, Uganda, who identifies herself only as Grace M told the Daily Maverick that the resident Indian community looks down on black Ugandans. “They don’t pay us a decent amount, often their men look upon us women as being inferior and try to exploit that. Rarely outside of the workplace will you see Asians socialising with Africans; many see themselves as above us, it’s only when it comes to making big business deals that you see them integrating.”

Mombasa-based Shefali Syed, who comes from an Indian family based in the city for decades, says things are a little different in Kenya. “Asians and Africans interact more here, yet anti-blackness still prevails. There is still a belief among some that we as Asians are better than Africans. It was a set-up during colonialism, Asians often being given better roles by the British, setting up a hierarchy which birthed the idea that we were somehow superior.”

Beyond India being an attractive destination for African nationals seeking healthcare services and higher education, trade between India and the African continent rose from $30-billion in 2008 to $72-billion in 2015.

And so, while Indian and African leaders exchanged hugs, made deals and wore their “Modi jackets”, the elephant in the room was and continues to be the silence over the racism being faced by Africans in India.

Outside the fancy hotels, away from the negotiating table, history and ignorance intersect, unleashing both physical and psychological violence. It’s time to label it what it really is: racism. DM

Samira Sawlani is a writer, journalist and analyst, specialising in East Africa. She can be found @samirasawlan.

Photo: (L-R) Association of African Students President Samuel Jack, Association of African Students Public Relations Coordinator Presidoe Okungi, along with other African students Ezeugo Nnamdi Lawrence and Rodrique Kazamba during a press conference in New Delhi, India, 28 March 2017. According to a news report, African students were beaten up by the mob in Greater Noida outskirts of New Delhi, after a 17 years old Indian boy allegedly died due to the drugs overdose. EPA/RAJAT GUPTA