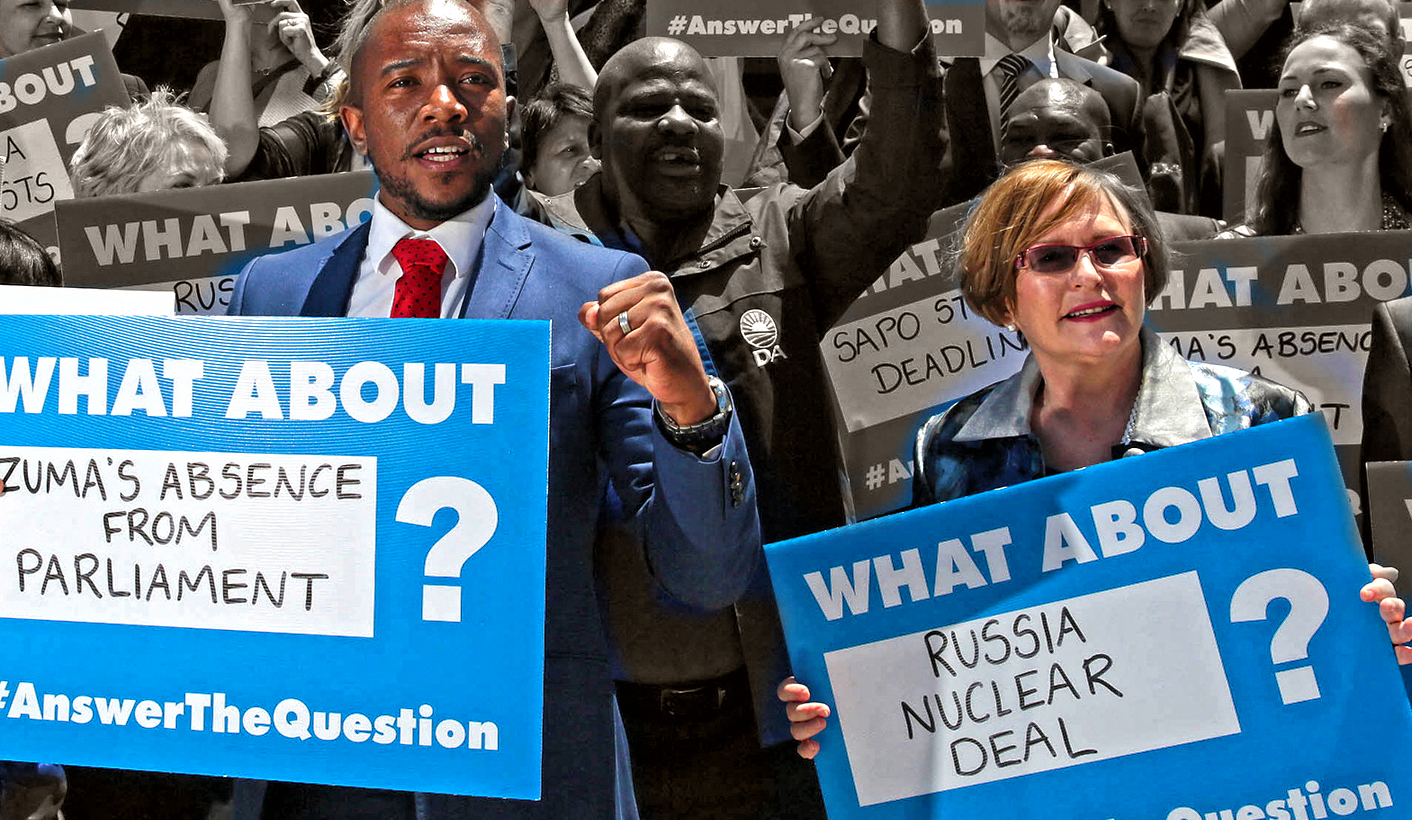 Nearly unanimous was the decision to charge Western Cape Premier Helen Zille with bringing the DA into disrepute, deliberately acting in a way that negatively impacts the party and publicly opposing the party’s principles and published policies. DA leader Mmusi Maimane on Sunday announced the decision of the party’s federal executive taken earlier in the day after a preliminary probe. Some two weeks ago he complained about Zille’s tweets about the positive legacy of colonialism following a visit to Singapore. Faced with an almost immediate public backlash, Zille sort of apologised, but then publicly reiterated those sentiments. By MARIANNE MERTEN.

Western Cape Premier Helen Zille remains in her job, but the DA is moving to close down further commentary on her tweets controversy. DA federal executive chairperson James Selfe told Daily Maverick that a letter would be sent to all DA members instructing them not to comment on the matter. Zille has not been banned from using Twitter.

The decision to haul Zille before a disciplinary committee of the federal legal commission sets in process a series of fastidious steps. Zille would still be notified officially of the charges on Sunday, giving five working days’ notice of proceedings. A panel of three of the 30-strong federal legal commission will conduct the disciplinary hearings at which lawyers are allowed to make presentations. If there is an appeal, a panel of five will deal with that.

If Zille is found guilty, the penalties, according to the DA constitution, range from her party membership being terminated or suspended, being suspended from positions and/or having privileges suspended to being admonished, fined a maximum of R50,000 and/or being ordered to do community service.

Given the potential challenges to co-ordinate lawyers’ diaries, there is no set time frame for finalising the disciplinary process. “Hopefully it will get done as soon as possible,” said Maimane.

The disciplinary hearing might be a bitter pill for the politician so closely associated with growing DA voting support in elections since taking over the lead from Tony Leon in 2007. It’s also a tough one for Maimane, who in 2015 was elected overwhelmingly as national leader following Zille’s surprise announcement that she would not stand again. Depending on how the chips fall, those close to her and what she is seen to represent may distance themselves from the party.

“This has not been an easy decision to take… Helen Zille is a former leader of the DA and the Premier of the Western Cape. She has contributed immensely to the growth and success of the DA. In the course of her life, she has consistently fought oppression and discrimination,” said Maimane.

But he also argued that it was his job to grow the party, pursue “our mission towards 2019” for a prosperous South Africa and what he calls the project of non-racialism. “No one individual is bigger than this.”

And that is where the nub lies. Zille’s comments have cast a cloud over the DA as it endeavours to shed allegations that it represents white interests and elites. Instead, such perceptions are reinforced by the comments about colonialism from a high-profile DA member and its highest representative in government, repeated by Zille in last week’s debate on her tweets in the Western Cape legislature.

Western Cape ANC secretary Faiez Jacobs on Sunday said the DA’s failure to suspend Zille pending the disciplinary hearing meant that for black party members “uncertainty remains on where the party stands on racism and on treatment of white and powerful leaders”. Not suspending Zille, according to Jacobs’s statement, meant “she still enjoys the benefits of power without any ensuing shame for her shameless act”.

Even as the DA seeks to shut down the colonialism tweets controversy by asking its members not to comment, the ANC and others may just continue to exploit the saga regardless of the disciplinary steps against Zille.

All this comes at a time Maimane described as an “unprecedented political moment”. A motion of no confidence in President Jacob Zuma in Parliament has been requested by the DA and EFF – National Assembly Speaker Baleka Mbete, who is also ANC national chairperson, on Sunday said consultations would unfold in terms of parliamentary rules – and both are pushing for an urgent scheduling of this constitutional motion, even if Parliament is in recess.

Both the EFF and DA, as well as the United Democratic Movement (UDM), have indicated they are in contact with ANC MPs who may support the opposition. The midnight reshuffle that saw Pravin Gordhan and Mcebisi Jonas sacked as finance and deputy finance minister has sparked anger not only in civil society, from which calls for mobilisation have emerged, but also the ANC and its alliance partner, the South African Communist Party (SACP), which has called on Zuma to resign. In an unprecedented move, ANC Deputy President Cyril Ramaphosa, Secretary-General Gwede Mantashe and Treasurer Zweli Mkhize have publicly distanced themselves respectively from the reshuffle to bring in new political bosses at the finance portfolio.

“Now more than ever our country must push to remove Jacob Zuma from power,” said Maimane, who talked of a mass movement for a prosperous South Africa, but did not indicate if, and how, his party would relate to calls for mobilisation from elsewhere.

Instead Maimane reiterated that the DA’s march on Friday to the ANC’s Luthuli House headquarters would go ahead, “peacefully”. It was not so when the DA in February 2014 tried to take its “fight for jobs” march to Luthuli House; police stopped the marchers before reaching the ANC head offices because of violence. In May 2012 violence broke out as DA supporters marched to Cosatu House in support of the youth wage subsidy the labour federation opposed.

The planned DA march was dismissed by EFF leader Julius Malema last Friday. But on Sunday Maimane argued it was appropriate. Zuma had been ANC president before the ANC majority in the National Assembly elected him as the country’s president, and repeatedly defended amid a series of scandals. “I want to give them that option on Friday – choose South Africa,” said the DA leader.

That “Choose South Africa” message is also one Maimane wants ANC MPs to heed. He announced a meeting with other leaders of parties represented in Parliament on Monday “to come together and agree on the way forward in removing Jacob Zuma from office”.

For Maimane, much is at stake as leader of South Africa’s official opposition – regardless of Zille’s fate. DM