Reshuffle Chronicles: ‘Intelligence’ reports – No Securocrat’s toolbox should ever be without them 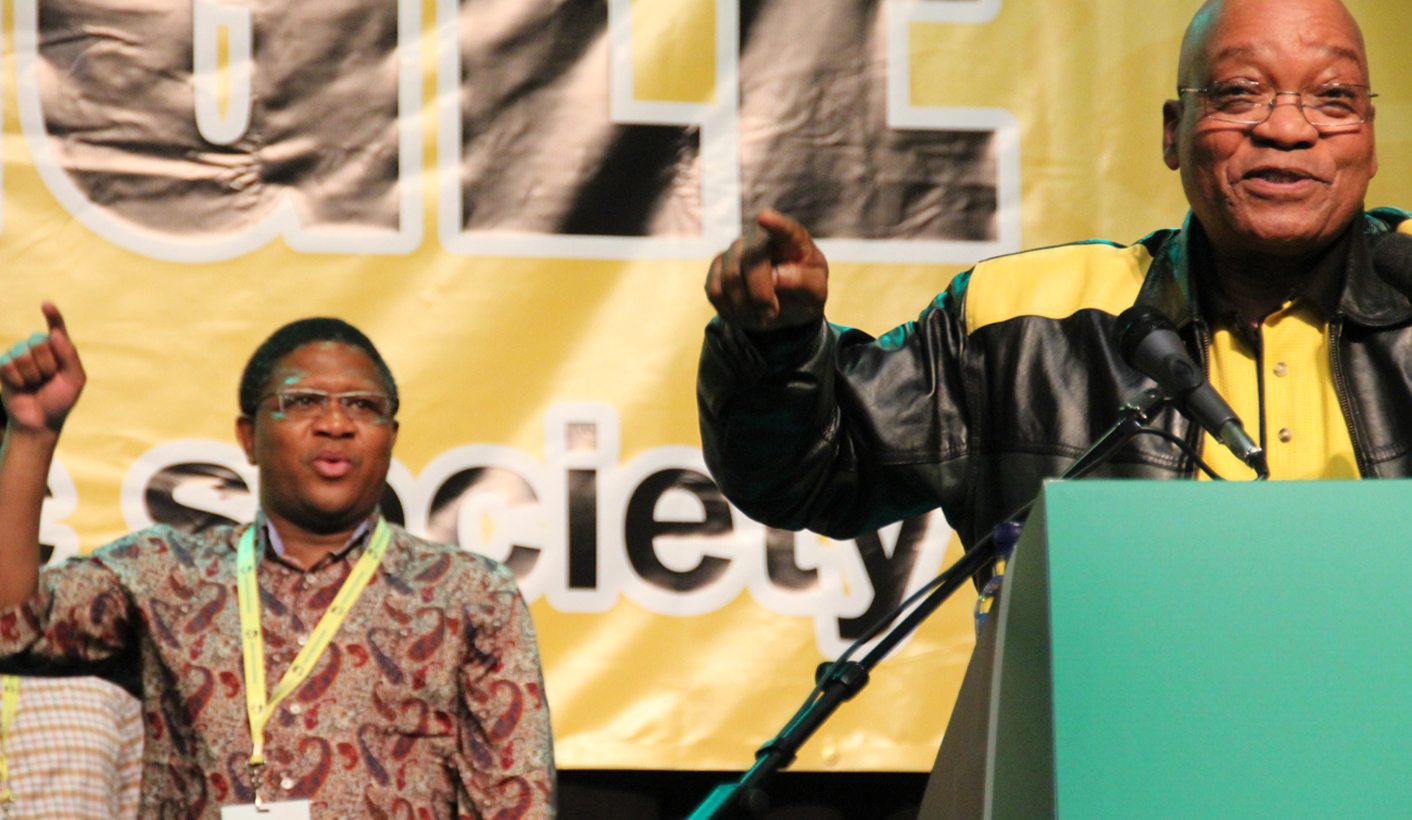 Police Minister Fikile Mbalula and his deputy, Bongani Mkongi, alongside Home Affairs Minister Hlengiwe Mkhize, are the visible changes within government’s security cluster. Their performance will no doubt be watched, but it's the use of the widely discredited “Operation Check Mate” report in the firing of Finance Minister Pravin Gordhan and his deputy Mcebisi Jonas that raises red flags. Phrased in the regime change narrative put into the public domain by those associated with President Jacob Zuma’s inner circle, this document elevated the use of so-called intelligence reports targeting those seen as political opponents in ANC factional politicking, opposition parties and non-governmental organisations to the highest level. By MARIANNE MERTEN.

In April 2001 Safety and Security Minister Steve Tshwete announced there was a plot to oust President Thabo Mbeki. Implicated by a former ANC youth league member were then businessmen Cyril Ramaphosa, Tokyo Sexwale and Matthews Phosa. There was a formal investigation, and in December 2001 Tshwete publicly acknowledged the allegations were false – and apologised.

That “Operation Check Mate” in 2017 has gone unchallenged, and was used to trigger a wide-reaching reshuffle of the executive, is a sign the influence of so-called intelligence reports of dubious origin amid the increasing securocrat attitudes of the Zuma administration. This highlights the changes in South Africa’s constitutional democracy.

It is on public record that the document claims the finance ministry was opposing the president and had “the support of many in the ANC and other parties to force the President out”. Or as it is put: “By having them all stand together they are attending [sic] to show unity so that the UK and USA banks will join in with the South African banks Against [sic] the President.”

Ramaphosa, speaking on eNCA and SAFM on Friday, said this report contained “unsubstantiated allegations”. Recalling his 2001 experience, and how he took the matter to Nelson Mandela, Ramaphosa said he informed Zuma of his objections, and that he would make these public.

At Friday’s media briefing, outgoing Finance Minister Pravin Gordhan held up a copy of the report written in President Zuma-friendly large letters, describing it as “absolute nonsense” and “fundamentally flawed”. South Africa is an open democracy and economy, he said: “How can it be killed by two people?”

The ANC Chief Whip Jackson Mthembu tweeted: “I disagree with the removal of Gordhan & Jonas based on a suspect intelligence report. Their commitment to the NDR (national democratic revolution) is unquestionable”.

But such intelligence reports have been used before to step up the pressure on those perceived as political opponents. In August 2013, at the height of moves to oust trade union federation general-secretary Zwelinzima Vavi over his criticism of the Zuma administration, a document claimed he was funded by US organisations to undermine the government. In 2015 a discredited blog claimed former public protector Thuli Madonsela – who in 2014 was also called a CIA plant by Deputy Defence Minister and MKVA leader Kebby Maphatsoe – former DA parliamentary leader Lindiwe Mazibuko and EFF leader Julius Malema spies.

It’s unclear whether Zuma believed what “Operation Check Mate” claimed, or whether it was a tool to bring about the removal of Gordhan and Jonas. There is now a new finance minister, and a broad-sweep reshuffle to shore up his support.

Thus Fikile Mbalula – the politician dubbed Mbaks and Razzmatazz, who thanked his “tweeps” and well-wishers on Twitter with a message featuring emojis of a siren and police car – moved from the sports to police portfolio. Although Mbalula stood on the “Anything But Zuma” slate at the 2012 Mangaung national conference, he was not ditched from Cabinet and in the years since gained trust.

As some expressed surprise, others invoked his experience as deputy police minister from May 2009 to November 2010 as relevant experience.

It was during that time Mbalula and Bongani Mkongi, now Deputy Police Minister, first worked together. When Mbalula as deputy police minister in June 2009 opened an executive management and leadership development centre at the Paarl SAPS training centre, it was Mkongi who issued the official media alert available on the government website.

Mkongi, who also comes from the ANC youth league but in the Western Cape, became head of Mbalula’s office and followed him to the sports ministry, where he first was director of research and speech writing and then the chief of staff, according to People’s Assembly.

After the May 2014 elections, Mkongi came to Parliament as an ANC MP, serving on the labour and trade and industry committees. On Friday, one MP who served with him described Mkongi as “the president’s imbongi in DTI (always saying) radical this, radical that, very much in line with what the president is saying”.

Perhaps it is this attitude that put Mkongi on the podium during the 2015 and 2017 parliamentary debates of the State of the Nation Address. On both occasions, he tackled DA leader Mmusi Maimane. In 2015 it was over the opposition politician’s description of Zuma as a broken man: “Honourable Mmusi Maimane for an example is a broken young black man with a broken heart, Mr President. He is a broken young blackman in the broken blue sea of white conservative males,” said Mkongi. And in 2017 he described Maimane as “a white man in a black skin” after dismissing the DA’s debate theme of a “lost generation” to describe the challenges of unemployment and access to education by today’s black youth. When ordered to withdraw the comment because it is unparliamentary, he repeated them in isiXhosa.

Away from Parliament, Mkongi courted controversy over 2016 comments that a #ZumaMustFall banner on a block of flats and the flats occupants should be burned. Complaints that the DA laid over those comments to Parliament’s ethics committee and the South African Human Rights Commission (SAHRC) still hang, unresolved, over Mkongi’s head.

Contacted for comment on his appointment, Mkongi said: “I don’t need newspapers now… You can call me when I’m in (the) office”.

Like his deputy, Mbalula is no stranger to controversial statements. During his time as deputy police minister Mbalula headed the “Washa [beware] Tsotsis!” anti-crime campaign, publicly claiming reductions in crime.

In November 2009 he took a hard-line on fighting crime, even if citizens are endangered. “In the course of any duty the innocent will be victimised,” he was quoted at the time by the Mail & Guardian. “In this particular situation where you are caught in combat with criminals, innocent people are going to die, not deliberately, but in the exchange of fire. They are going to be caught on the wrong side, not deliberately, but unavoidably… Yes. Shoot the bastards. Hard-nut to crack, incorrigible bastards.”

However, Malema on Friday indicated a measure of confidence in Mbalula as police minister – if he dropped being the “minister of Twitter” and seeking celebrity status. “If it were another Mbalula I knew…” said Malema in reference to the time the two politician’s shared in the ANC youth league. “Mbalula must really begin to take himself seriously… He has the potential. But he is just clowning.”

Mbalula’s appointment as police minister was welcomed by the South African Policing Union (Sapu) and Police and Prisons Civil Rights Union (Popcru), according to TimesLive. Within policing circles there appears a sense that Mbalula may bring a new determination to the police ministry, caught up in a series of court cases steeped in politicking over senior appointments.

Mbalula’s predecessor Nkosinathi Nhleko defended the appointment of Hawks boss Lieutenant-General Mthandazo Ntlemeza, saying the courts that criticised the policeman for dishonesty had merely expressed “an opinion”, and had not made a legally-binding ruling. Depending on how Mbalula decides to tackle his new portfolio, there may also be a warming in the chill with Robert McBride, the head of the police watchdog Independent Police Investigative Directorate (Ipid), whom Nhleko unsuccessfully tried to remove from office.

As Malema described Mbalula as “hard-working”, others acknowledged his energy. “If he can look good and make things happen, he will do it,” said one policing insider.

But the verdict is still out on the police minister and his deputy, as it is on the new Home Affairs Minister Hlengiwe Mkhize. A one-time treasurer of the ANC women’s league, which this year endorsed former African Union Commission chairperson Nkosazana Dlamini-Zuma as the next ANC president, she has served as deputy minister of economic development, correctional services and most recently telecommunications and postal services.

Mkhize will finalise the repositioning of Home Affairs in the security cluster, and lead the department for the envisaged border management agency in charge of traffic in and out of South Africa. The process was started last year by her predecessor, now finance minister, Malusi Gigaba. While Cabinet on March 1 said it approved the business case to position the department “within the security system of the state so that it contributes to national security”, it is understood the proposals are problematic. A key concern remains the role of home affairs in the domain of custom and excise, which accounts for around a third of the national revenue and is currently administered by the South African Revenue Service (Sars).

The next few days and weeks will reveal the extent of the impact of these changes in the security cluster of government. DM