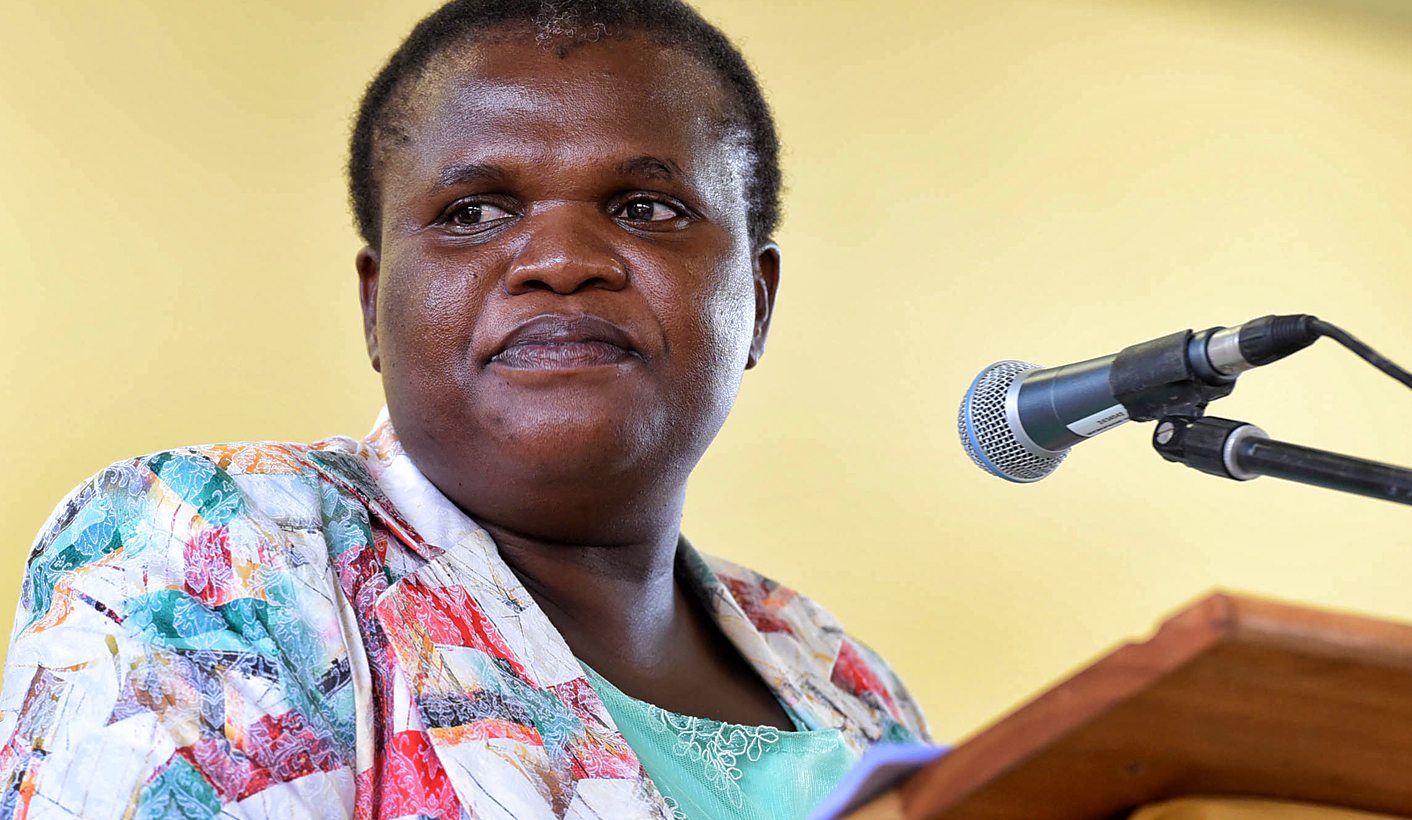 It remains unclear when the newly appointed SABC interim board will be able to start its job after Communications Minister Faith Muthambi wrote to its members to say they first had to undergo security vetting, and she had to sign off on their appointment. The interim board on Thursday confirmed it had submitted the information requested by the minister – copies of IDs to start the vetting process – and now “await further communication”. The ministerial letter comes just days after President Jacob Zuma appointed the interim board of the financially and governance troubled public broadcaster. By MARIANNE MERTEN.

The letter from Communications Minister Faith Muthambi was handed to the five-strong SABC interim board by the SABC secretariat on Thursday “during its meeting with the communications committee and hundreds of SABC staffers”, according to DA MP and communications spokesperson Phumzile van Damme.

Invoking vetting was a “blatant attempt to go undermine the authority of the new SABC interim board in order to delay it from performing its duties”, she said, adding that this move would not go unchallenged.

A person with knowledge of SABC matters said Muthambi “is obstructing the process, allowing executives to continue unchecked”.

Vetting, done by the State Security Agency (SSA), is a time-consuming process. The person, who cannot be named because they are not authorised to speak to the media, added: “The previous interim board was not vetted. There is no such requirement in law.”

Muthambi’s letter, seen by Daily Maverick, came in a week when the parliamentary oversight spotlight is on the troubled public broadcaster. On Tuesday Parliament’s watchdog on public spending, the Standing Committee on Public Accounts (Scopa), asked hard-hitting questions on financial management and governance; on Thursday it was the turn of the communications committee MPs.

The ministerial letter is the latest twist in relation to Parliament’s inquiry into the state of affairs at the public broadcaster during which the last member of the board, chairman Mbulaheni Maguvhe, resigned.

On March 7 the National Assembly had adopted a hard-hitting report requiring the interim SABC board to institute financial and governance audits, while recommending that the president “seriously” reconsider retaining Muthambi in the portfolio, given a series of incidents of political interference. The adoption meant the report is now a resolution of Parliament.

On March 11 Muthambi wrote to the National Assembly expressing her “dissatisfaction with certain aspects” of the parliamentary inquiry into the SABC, although three days later, on March 14, acting Speaker Lechesa Tsenoli replied: “The Speaker of the National Assembly has no powers to overturn resolutions adopted by the House”, according to statements by Parliament.

On March 27, Zuma formally appointed the five-strong interim board members unanimously recommended in line with the Broadcasting Act by Parliament’s communications committee.

“Millions of South Africans rely on the public broadcaster for news, information and entertainment. We wish Ms (Khanyisile) Kweyama and her team well as they begin the important task of leading and revitalising one of the most important national resources, the SABC,” a presidency statement said.

On March 29, Muthambi’s letter to the interim board said that because the SABC was a National Key Point, “you are therefore required not to commence with your duties as an interim board member until the security clearance process has been concluded by the State Security Department”. The interim board members had until the end of Thursday, when the letter was handed to them in front of about 400 SABC staff, to submit their IDs to start the vetting.

In a brief statement the interim board said “(we) confirm that we have received letters from the Minister of Communications, Honourable Faith Muthambi, regarding the commencement of our duties. Board members have supplied the information requested by the minister and we await further communication”.

As an SABC board reports to Parliament via the communications minister, wrote Muthambi, “as such I will countersign the decision of the president after your security clearance has been concluded”.

If Muthambi’s interpretation holds, it could effectively mean a minister may oppose a presidential appointment allowed in law. For example, the finance minister would have to countersign the appointment of the South African Revenue Service commissioner, or the justice minister that of the national director of public prosecutions.

SABC spokesperson Kaizer Kganyago said the matter was one between the minister’s office and the interim board. Muthambi’s spokesperson Mish Molakeng did not respond to phone calls and voicemails. However, News24 quotes him as saying Muthambi’s letter was “simply bringing the vetting process to the attention of the new board members because it is an inherent and critical step in appointing members to the SABC board”.

With no legal requirement for vetting of the public broadcaster, whose offices have been declared a National Key Point, there are more questions than answers. For now, it seems the interim SABC board the Parliament wanted to start the clean-up at the public broadcaster has been hobbled. DM