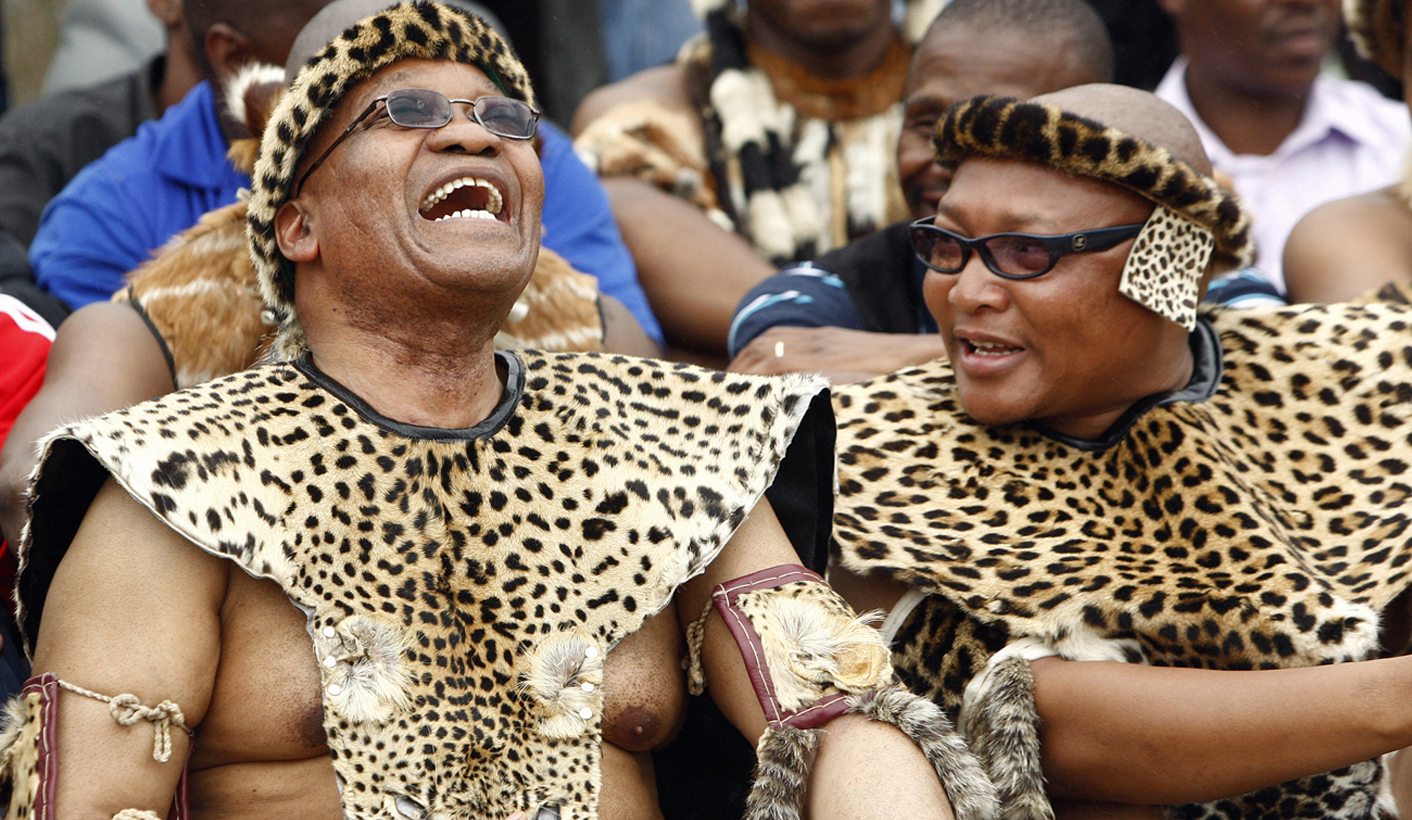 Traditional leaders are unhappy. They are unhappy over ministers’ lack of regular interaction with them, a lack of financial and other support like medical aid and pensions, and about the centrality of land. So President Jacob Zuma offered them a meeting with his ministers to discuss these issues, raised in the National House of Traditional Leaders on Thursday. In the house itself, Zuma kept it on the straight and narrow in his first public appearance since the political pushback over an anticipated Cabinet reshuffle to remove Finance Minister Pravin Gordhan and his deputy, Mcebisi Jonas. By MARIANNE MERTEN.

Parliament sometimes can be a bubble, seemingly separated from the political machinations either at the Union Buildings, the ANC’s Luthuli House head offices and elsewhere. On Thursday, the handy fallback on protocol and procedural pomp and ceremony provided a safe space for President Jacob Zuma, in his capacity as head of state. He was seen to be working amid ongoing controversies over a Cabinet reshuffle – according to Reuters, a number of Cabinet ministers indicated their willingness to resign if the current finance leadership is changed – and the EFF’s application to the Constitutional Court to ensure the national legislature takes action against Zuma over his conduct in the Nkandla saga, including lying to Parliament.

But on Thursday, in the company of traditional leaders, Zuma returned to familiar ground – expropriation without compensation, land, and crime. This came after he promised a gathering between his ministers and traditional leaders to discuss several issues, including the closure of schools in rural areas.

“I don’t think it is difficult to organise such a gathering… to say there’s a come together of traditional leadership with the ministers so they can really deal with the issues,” said Zuma, who did not responded directly to a request for 10 cows and a bull for each traditional leader. “To me there are too many issues that the traditional leaders and government should be discussing to be able to handle the country correctly.”

Zuma picked up the amaKhosi’s criticism of the quality of legal advice given to Parliament and government, leading to cases being lost in court, saying he “appreciated the sharp criticism of the law advisers…” And then he proposed changing laws and the Constitution to make it possible to expropriate land without compensation and to deal with criminals.

“We must do everything within the law…. We (are) not saying let us take the land, we are saying let’s amend the Constitution. Constitutions are amended all the time,” he told the traditional leaders. “If we don’t have the law, or the Constitution does not address it, let us use democratic means. You can’t have a constitution that makes people remain in poverty. That can’t be good.”

IFP President Mangosuthu Buthelezi earlier had expressed his concern over expropriation without compensation: “I fear if we deviate from the Constitution we risk peace, reconciliation and even investment.”

This was the third time the land issue had been discussed in a parliamentary setting in recent times. Days after ANC MPs, and others such as Buthelezi, voted against an EFF proposal to amend Section 25 of the Constitution, dubbed the property clause, Zuma came out in support of such uncompensated expropriation in his opening address to the National House of Traditional Leaders.

“We need to accept the reality that those who are in Parliament, where laws are made, particularly the black parties, should unite because we need two-thirds majority to effect changes in the Constitution,” said Zuma then, effectively contradicting his parliamentary caucus.

Already the security cluster ministers, who Zuma met following his visits to two police stations earlier in the year, have begun discussions on this. A review of criminal justice legislation is looking at the inclusion of “issues of state security and issues of national sovereignty” in bail procedures, it emerged earlier this month.

Solutions seemed to be on the president’s mind. “We in Africa have a gift that there is no problem we could not resolve historically. That’s why we had no prisons. Because if someone went wrong, solutions were found.”

Reiterating that 2017 has been declared the year of Oliver Reginald Tambo, the former ANC president who led the liberation movement in exile, Zuma said: “We want to deepen unity of the nation… We thought as some South Africans seem to be very agitated, they seem to be very violent, they do not seem to have all the respects.

“This leader (OR Tambo) that we are remembering embraced all the values that we need as a country. We need to be united. We need to solve issues by discussing and listening to one another. That was his nature… the culture of voting disappeared. He dealt with issues on the basis of consensus.”

It was a businesslike president before the traditional leaders. Effusiveness came only when Zuma situated land at the centre of South Africa’s future, echoing what at least one traditional leader described as “God-bestowed”, and his governing party’s radical socio-economic transformation.

“I know some people seem to be very shy to talk about the truth. If you take the land, you take away what you need to survive,” said Zuma. “Poverty, inequality and unemployment – those are the children of land dispossession.”

Everywhere else in the world, people are in charge of their own economies, and resolving the land question was central to reconciliation and empowerment.

Surrounded by bodyguards, he left Parliament, waved silently at reporters asking him about a Cabinet reshuffle, and got into his car. The sirens of Zuma’s presidential escort echoed in the streets of Cape Town as he left the national legislature back to the political realities elsewhere. DM

Photo: South African President Jacob Zuma (L) shares a joke with a family member during his traditional wedding to Tobeka Madiba, his fifth wife, at the village of Nkandla in northern KwaZulu-Natal, January 4, 2010. REUTERS/Siphiwe Sibeko