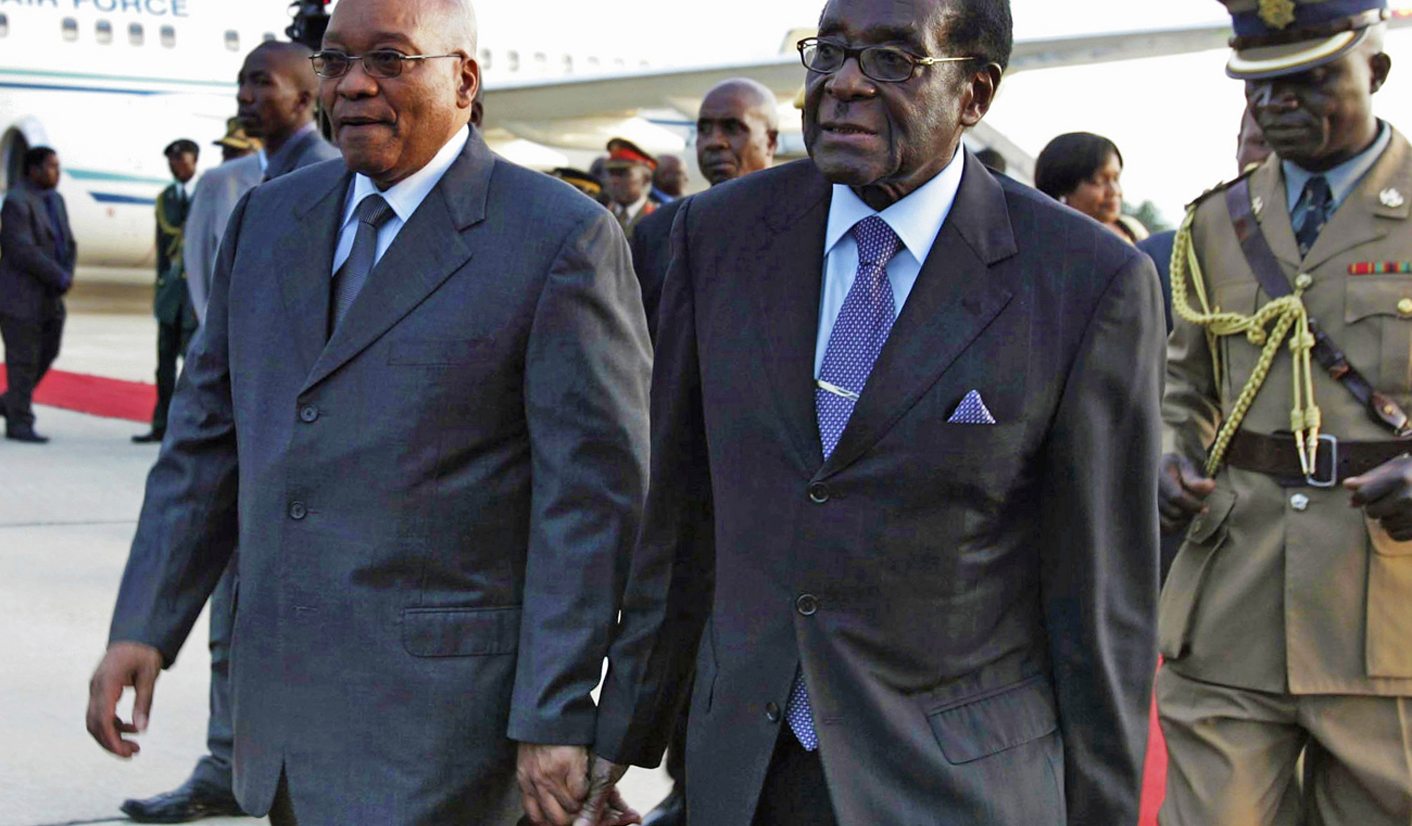 For Zuma, as for Mugabe, land reform is clearly a political instrument. By Peter Fabricius for ISS TODAY.

“The ANC is using the Zanu-PF tactics of remaining in power,” South Africa’s Pan Africanist Congress (PAC) declared this week. “When Zimbabwe’s Zanu-PF realised that it was likely to lose power, as it was perpetually becoming unpopular among the Zimbabweans, they took the land from the dispossessor to the dispossessed.”

Now the African National Congress (ANC) was doing the same, the PAC said, because it was seeing its own popularity fade. The PAC said this in a statement in which it otherwise welcomed the ANC’s decision – at its national executive committee meeting last weekend – to work with other former liberation movements to redistribute the country’s land to the “dispossessed black majority”.

The ANC was finally coming to its senses about land, said the PAC, which broke away from it 58 years ago precisely over this question.

Was this just wishful thinking and propaganda by the PAC? That the ANC’s national support has been dwindling became clear in the local government elections of last August, and President Jacob Zuma’s own fortunes have also waned within the ANC. Have Zuma and his faction in the ANC resorted to the Zanufication of the land issue – and indeed also of the economy at large – in a desperate attempt to shore up?

Zuma recently broke with the ANC’s official land policy by proposing that the state should be given powers to expropriate land without compensation. And in his February State of the Nation address, Zuma proposed a wider “radical socio-economic transformation”.

This would mean using the state far more aggressively to intervene in the economy to accelerate the upliftment of black citizens, which, he said, market forces had dismally failed to do.

But so far, Zuma’s attempts to open the fiscal floodgates to finance this state intervention (including plans to spend about R1-trillion on a fleet of nuclear power plants) have been held in check by two prudent finance ministers who contended that the country simply could not afford such extravagance.

On December 9 2015, though, Zuma abruptly fired one of them, Nhlanhla Nene, to get him out of the way – replacing him with a pliable and unknown ANC backbencher, David van Rooyen.

International markets reacted badly, sending the rand into a tailspin and wiping billions off the Johannesburg Stock Exchange. Senior leaders of the ANC and of the business community forced Zuma to get rid of Van Rooyen after just three days and replace him with Pravin Gordhan, a respected former finance minister.

Gordhan continued Nene’s vigilance over the Treasury. His thrift was in no small measure motivated by a plausible conviction that Zuma and his business cronies, the Gupta family, had already “captured” part of the state and were still trying to get their hands on other state-owned enterprises – and even the Treasury itself.

Gordhan launched a campaign to persuade jittery foreign investors that prudent economic policies had not been abandoned, and convinced international credit rating agencies to hold off from a widely expected rating downgrade for South Africa to junk status.

But Zuma did not take his December 9 humiliation lying down. Even after the “state capture” saga and many other corruption scandals had cost the ANC three metropolises in the August local elections last year, Zuma continued to plot against Gordhan.

Evidently reading from a Zanu-PF-like script (though supposedly written by a British public relations firm), he recast his major tussle with Gordhan from a grubby and corrupt scrap over state resources to a heroic ideological battle by black South Africans. Led by the ANC, this was a battle for the sovereign control of their economic destiny – against regressive white monopoly capitalists trying to retain their historic grip. The latter were, of course, backed by self-serving international investors and abetted by credit rating agencies.

Those, like Gordhan, who blocked the efforts of Zuma and his Gupta friends to capture the state, were presented as traitors to this noble cause. Not everyone, even in the ANC, was fooled by this shift in narrative.

Many in the ruling party, including much of its parliamentary caucus, sided with Gordhan. Veterans and stalwarts of the liberation struggle launched a campaign to remove Zuma from office – or at least from being able to manipulate the succession at this December’s ANC elective conference – while Zuma’s supporters, in the ANC women’s and youth leagues and in several provinces, called for Gordhan to be fired.

It was difficult to discern who had the upper hand. But on Monday this week, Zuma appeared to make his long-expected move against Gordhan, seemingly emboldened by majority support from the ANC’s national executive committee – its highest decision-making body between its five-yearly conferences – which had just met. Zuma abruptly recalled Gordhan midway through a roadshow in the UK to drum up investor support.

The sudden move has been widely interpreted as a prelude to firing Gordhan – a move, some said, which was postponed briefly only by the death on Tuesday of Rivonia triallist Ahmed Kathrada, rather ironically one of the veterans and stalwarts who had called loudest on Zuma to resign.

Zuma had probably been watching the rand rising against the dollar and decided he had enough cushion in the exchange rate to risk removing Gordhan. He was, quite ironically, inadvertently helped by US President Donald Trump, whose travails are depressing the US currency.

Emerging market economist Peter Montalto of Nomura International, among others, has speculated that recalling Gordhan from his investor roadshow was probably Zuma’s way of testing the market reaction to an imminent removal of Gordhan from the Treasury. And that reaction may have been small enough – a drop of some 3% in the exchange rate of the rand against the dollar – to persuade him to go ahead.

The symbolism of yanking Gordhan off an international investor roadshow could not have been coincidental. This was clearly Zuma sending a message to Gordhan, the ANC and indeed the foreign capitalists themselves, that wooing them was not a priority; the priority was state-led “radical socio-economic transformation” back home.

These attempts by Zuma to “Zanufy” the South African polity, as the PAC put it, are not very plausible and may provoke a backlash fatal to his cause.

Land expert Aninka Claassens, director of the Land and Accountability Research Centre at the University of Cape Town, believes that Zuma is now espousing radical views on land redistribution in part to shore up his waning support in the ANC – but even more so, as a smokescreen to mask the absolute failure of government land reform on his watch.

She says under Zuma, land reform has benefited wealthy elites close to the ANC far more than it has helped the poor.

Most of the state money budgeted for land redistribution has been channelled to big business projects such as Agri-parks, rather than, say, giving security of tenure to the myriad shack dwellers living on the perimeters of cities or small-scale farmers in rural districts.

For Zuma, land reform is clearly a political instrument to be used for ulterior purposes – as indeed Zimbabwean President Robert Mugabe used it in 2000 to radicalise politics and the economy when he lost a critical constitutional referendum that had become a test of his support.

There, too, the elites and cronies benefited more from land redistribution than the landless poor.

And Zuma’s call for “radical socio-economic transformation” apparently aims to serve the same purpose, echoing Mugabe’s radicalisation of the Zimbabwean economy by mobilising Zimbabweans against a common enemy of ‘Western imperialists’, allegedly seeking to destroy or control their country.

But South Africa is not Zimbabwe. It’s no coincidence that the PAC, which has always staked its political fortunes on land, enjoys minuscule political support. South Africa also has a much larger economy than Zimbabwe; much harder to manipulate, not least because of far stronger political and economic opposition.

If Zuma does, nonetheless, go ahead and fire Gordhan, the market response could well be larger and more damaging than his testing of the waters has suggested.

And the political reaction might also be bigger than he has anticipated. He got a small taste of it from Kathrada’s funeral on Wednesday when former President Kgalema Motlanthe won huge applause when he read Kathrada’s open letter to Zuma last year, urging him to resign. And Gordhan received a standing ovation.

As Anton du Plessis, Executive Director of the Institute for Security Studies in Pretoria, puts it, Zuma’s attempts to Zanufy the South African economy are the acts of a desperate leader, trying to shore up his waning power and influence – not a strong one.

A buffalo, hunters say, is most dangerous when it is wounded. DM