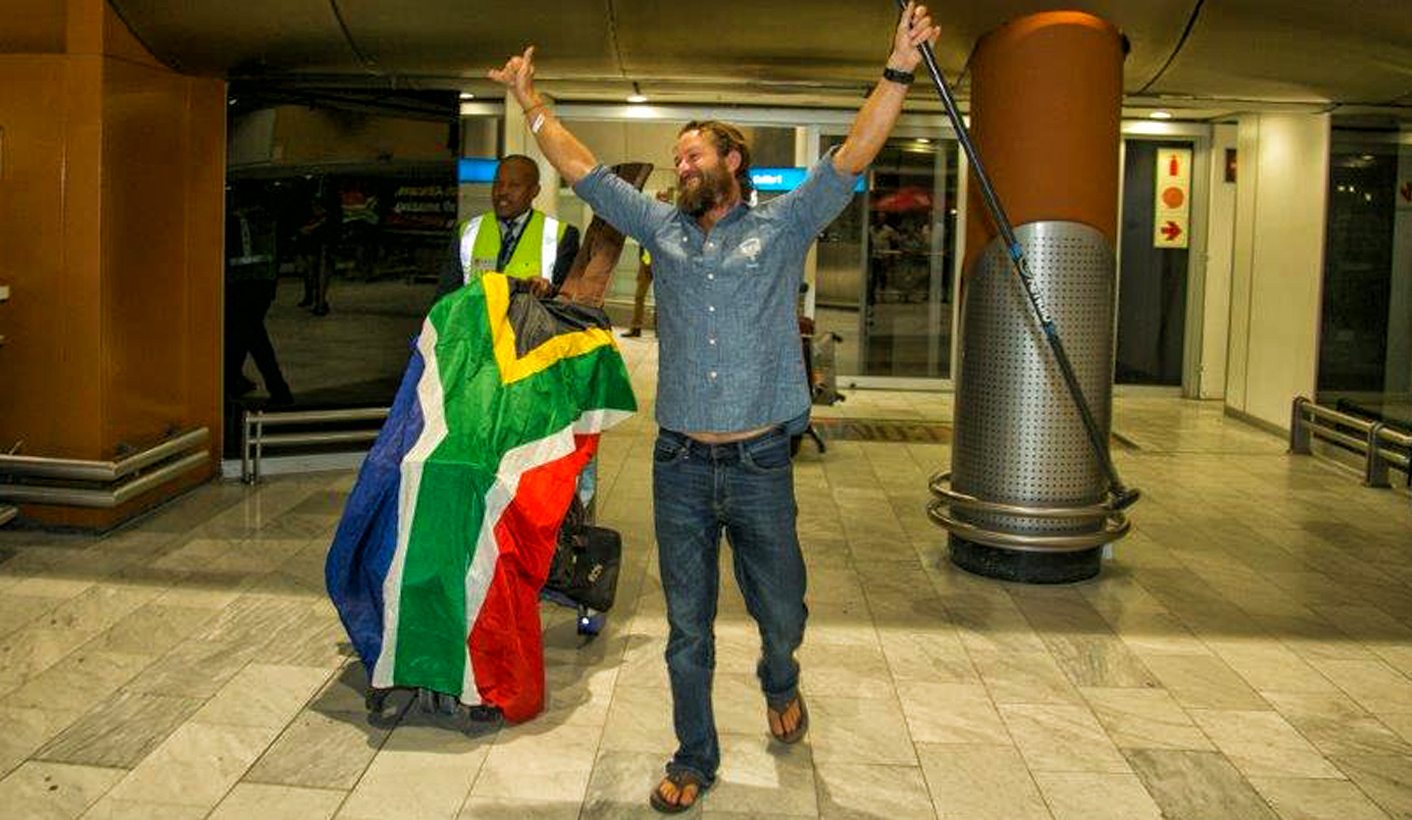 South African adventurer Chris Bertish has just become the first person to finish a solo, unassisted and unaided crossing of the Atlantic Ocean via stand-up paddleboard. It was a mission requiring superhuman quantities of physical and mental strength. To pull this kind of thing off, you have to be more than a little crazy. REBECCA DAVIS meets Chris Bertish in Cape Town.

I’m not convinced Chris Bertish is entirely human. For one thing, there’s the fact that he just spent three months standing on a board in the middle of the Atlantic, paddling towards America. In so doing, he pulled off a feat never achieved in recorded history: the first person to complete a transatlantic crossing on a stand-up paddleboard.

For another thing, he speaks the language of motivation like someone who has been programmed by a computer to do so. Attitude is altitude, he says. See the best in every situation. Stop complaining. Things can always be worse. There’s a lot of stuff about gratitude, too.

When Bertish bounds into his sponsor’s offices in Century City, he’s sporting a beard which is the result of three months’ growth at sea, and a polo shirt saying: “Chris Bertish. Impossible”. The “im” and the “possible” are in different colours, because it’s a pun. What it’s saying is: “Chris Bertish. I’m possible.” If you had to ask him about it, he would definitely have something to say along the lines of impossible is nothing, or there is no “can’t”, or similar.

Bertish only landed in South Africa on Monday, after a whirlwind press tour of the States. (His publicist told me: “He did all the American media. Except Ellen.”) Back on home turf, things have been similarly crazy. It seems like everyone wants a piece of Bertish. Endurance records like his tendency to attract public fascination; the drama of the hero versus the elements, one man battling nature – and his own mind.

I’m told before the interview that what Bertish is most commonly asked is how he went to the toilet while at sea. I hastily cross the question off the top of my list. What Bertish wants to talk about is the charity projects he raised money for: Signature of Hope, Operation Smile, and the Lunchbox Fund, for which he partnered with sponsors Carrick Wealth. Funds raised will be channelled towards surgeries to repair cleft lips, building schools and providing bursaries, and a school feeding programme.

Their plans are impressive. From the money raised by Bertish’s voyage – R6-million and rising – they will invest the funds and pay out a quarterly annuity to the charities. “Our initial calculations are for 15 to 20 years,” Carrick Wealth CEO Craig Featherby tells me. “We want to continue to raise money sufficient to pay for one operation a day, 1,500 schoolchildren fed forever, a school a year built forever.”

Bertish jumps in. “I actually think we just need to pause and think about that,” he says. “There’s no initiative been done like that in the history of South Africa. Even globally. It deserves a long pause.”

When I feel like we’ve paused enough, I ask Featherby if he was ever worried that Bertish wouldn’t succeed in his transatlantic mission.

At one stage, explaining to me the danger of capsizing – which happened to him several times on the ocean – Bertish says: “When you lose a bottle or a cup, what do you do? You go to the kitchen and get another. But when you have nothing, what do you do?” He leans forward with a peculiar intensity. “Have you thought about that? I think you should think about that for a second.”

For 93 days in a row, Bertish saw no other human besides his own reflection. His main contact was with a Scotland-based weather and forecasting consultant, who helped him plot his daily routes. He ate three meals on a rotating basis, and he grimaces as he recalls them: “Nasi goreng, ham carbonara, and vegetable risotto.” They came freezedried, and he’d heat them and add a bit of water.

Water was in short supply, however. His desalination kit was run off solar panels, and if the weather did not co-operate – or if sands from the Sahara blew over the panels – his use was restricted to an hour a day. Bertish ended up with 5.3 litres of drinkable water per day, which he points out is woefully inadequate for somebody performing the equivalent of an Ironman every day. “I should talk to a sports scientist about that,” he muses to Featherby.

The image of Bertish being foiled by his solar panels conjures up an irresistible picture of Matt Damon in The Martian. Damon is, coincidentally, one of three actors that Bertish jokingly suggests could play him in a Hollywood film of his voyage. The other two are Keanu Reeves and Matthew McConnaughey.

Bertish described his daily schedule as follows: “I’d have a 10- to 14-hour day of exercise, get into my cabin rocking around, try and make dinner with an open flame without destroying everything, pour that into a container, eat that with a big smile on my face, look at the weather and the routing, realise I was way behind schedule and possibly going to run out of food and die!”

Despite that slightly grim rundown, Bertish denies having fallen into many emotional lows. “I don’t get into a really negative space,” he says. And then amends: “I had a tough day on Christmas Day. Conditions were tough, the forecast had gotten exponentially worse, the craft was leaking. I ended up sitting in my cabin eating my freezedried food packet and I just decided to change my attitude and my perception of my reality, and start reprogramming my mind and focus on what was going right. I told myself: ‘Shut up, get up, stand up, take action’.”

When I ask him whether he had any entertainment, he looks as me as if I have lost my mind. “Entertainment? I don’t even know what that means!” I knew he had a MacBook with him, so I’d imagined it might be packed with exciting series. Scratch that. Distraction, I suggest. “I wrote a Captain’s Log, trying to positively inspire people,” he says.

What propelled him, he says, was the thought of the children whose lives he could change if he succeeded in his quest. “That’s what drove me every single stroke,” he says. (There were 1,944,000 strokes.) “Without a very strong sense of purpose, I don’t believe you can do what I did. I can get though more than most people because I’m very determined. But you have to be driven by passion and powered by a force greater than yourself. It turns you from being superhuman to being invincible.”

He points out that the previous person to attempt to cross the Atlantic solo via stand-up paddleboard – Frenchman Nicolas Jarossay – had to be rescued after just 50km. Bertish’s final total was 7,500km, from the coast of Morocco to Antigua.

When he made land at last, over three months alone at sea deprived of all human comforts, what was the first thing Bertish wanted to do?