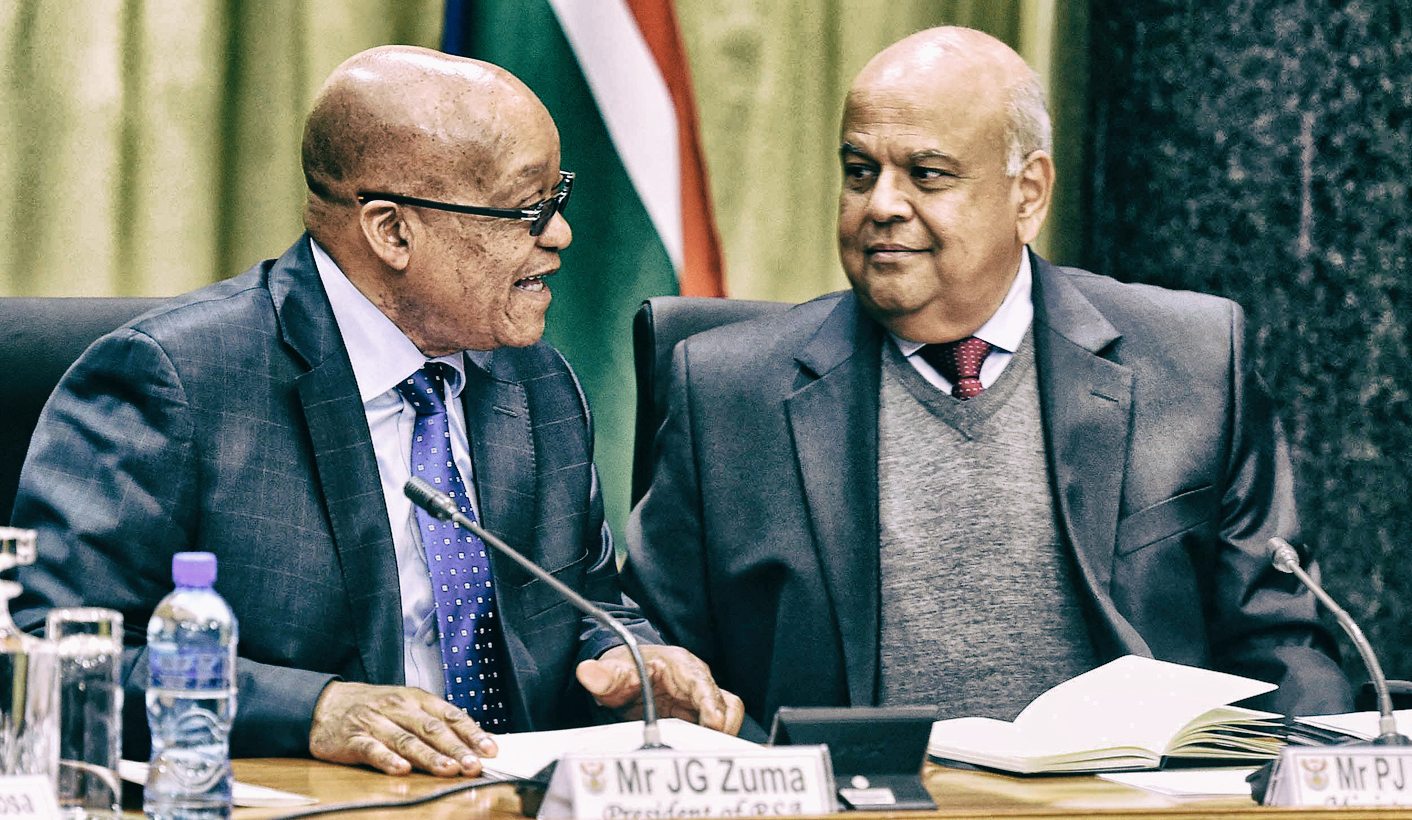 President Jacob Zuma is apparently determined to fire Finance Minister Pravin Gordhan, telling the ANC’s top officials that there was an irretrievable breakdown in their relationship. While the officials, including Deputy President Cyril Ramaphosa and ANC Secretary-General Gwede Mantashe, accepted his explanation, they advised Zuma that he could not fire Gordhan and retain the poorly performing ministers in the Cabinet. The officials also rejected Brian Molefe as the candidate to replace Gordhan. While the president has undertaken to think through the matter, South Africa will have the opportunity to mourn and lay to rest Struggle icon Ahmed Kathrada. By RANJENI MUNUSAMY.

As it turned out, Pravin Gordhan and his director-general Lungisa Fuzile flew back to South Africa from London on Monday night for no reason whatsoever. The axe that looms over Gordhan and his deputy Mcebisi Jonas’s heads did not fall on Tuesday, as expected. In fact, Gordhan, Jonas and Fuzile were apparently puzzled about whether they needed to present themselves to the Presidency or wait to be contacted.

It is understood that Zuma wants to fire Gordhan and Jonas, and to suspend Fuzile. It is unclear what the grounds for Fuzile’s suspension would be. The message sent to Gordhan in London was that he and the director-general should return to South Africa.

On a day when the country was coming to terms with the death of former Rivonia trialist Ahmed Kathrada, it also had to contend with rumours that Gordhan had resigned and try to figure out why he and Fuzile were at the ANC’s headquarters, Luthuli House. As the director-general of the National Treasury, it was particularly confounding as to why Fuzile was at the party offices.

But if there is anything the Zuma presidency has taught us, it is that logic and rationality have little to do with what happens in politics.

The question remains: why was the international investor roadshow to the United Kingdom and United States abruptly cancelled when it targeted multitrillion-rand worth of investment? In a statement on Tuesday, the Treasury said that in eight hours in London, Gordhan and his delegation had five face-to-face meetings with 60 representatives of fund managers including BlackRock, T.Rowe, Aberdeen, Eaton Vance, Vanguard, Investec, Metlife and Apollona, and 28 investors in a combined lunch. They also met rating agencies Fitch and Moody’s and had a teleconference with Standard & Poors.

According to the Treasury, the top concerns raised by the ratings agencies and investors were around economic growth, fiscal policy and South Africa’s politics. The latter concern could not have been helped much by Zuma’s instruction that the trip be cancelled and that Gordhan should return home.

So why did Zuma do it? Was it simply to humiliate Gordhan and Jonas, and show them who’s boss? Or did Gordhan do something to infuriate Zuma, prompting him to rescind authorisation for the trip?

Zuma’s assertion that there is an irretrievable breakdown in his relations with Gordhan suggests that there was a tipping point. Considering the timing of Zuma’s decision to recall the Treasury team, it could be Gordhan’s comments at a breakfast event on Friday that annoyed the president.

Gordhan said there was no need for Zuma to intervene in his working relationship with South African Revenue Service boss Tom Moyane. Moyane said at a media briefing last month that he would approach Zuma to mediate the conflict between him and Gordhan. But Gordhan said on Friday that this was unnecessary.

“There’s no need for anybody to intervene. Mr Moyane is the accounting officer and he’s responsible to the minister.”

It is possible that Zuma and his allies took offence at this and perceived it as Gordhan undermining the president’s authority.

Another theory is that the president believes allegations in a pseudo-intelligence report claiming that Gordhan was advising foreign business people to invest in South Africa only when Zuma goes. It is not clear who compiled the report and on what these allegations were based.

It was at a bilateral meeting with the ANC on Monday afternoon that Zuma informed South African Communist Party (SACP) senior officials of his intention to remove Gordhan and Jonas. The SACP leaders apparently challenged him on this decision, saying it was not in the country’s interests.

At a later meeting with the ANC officials – Ramaphosa, Mantashe, Zweli Mkhize, Baleka Mbete and Jessie Duarte – Zuma explained that he was no longer able to work with Gordhan. The officials said while they understood his resolve and respected his prerogative, it was not advisable for Zuma to sack Gordhan and Jonas, and retain non-performers in the Cabinet such as Faith Muthambi, Bathabile Dlamini and Mosebenzi Zwane in their positions. They said Zuma could not wield his axe selectively. They also did not approve of Zuma’s choice of former Eskom CEO Brian Molefe as the replacement for Gordhan.

Zuma undertook to think about the matter and go back to the officials with his decision. The next meeting of the ANC’s top six officials would be on Monday so Zuma could hold off on acting until then. However, there is nothing that stops him from making changes to the Cabinet without consulting the ANC officials. The risk for Zuma is that when the matter explodes in the next ANC national executive committee meeting, as it inevitably will, the officials could distance themselves from his actions. This removes Zuma’s political cover.

While government is bracing for Zuma’s latest act of sabotage, Gordhan and Jonas are continuing in their positions until they are told otherwise. Contrary to reports, Gordhan did not offer his resignation when he met with Mantashe on Tuesday.

In a brief interview with journalists at Luthuli House, Mantashe refused to divulge what was discussed with Gordhan. Regarding Zuma’s plans to make changes to the Cabinet, Mantashe said:

“The time for taking the nation into confidence has not arrived.”

In a doorstop interview with journalists at the North Gauteng High Court, Gordhan would also not say what his meeting with Mantashe was about. Gordhan and Jonas made an unexpected stop at the court where the minister’s application for a declaratory order is being heard. Gordhan is seeking protection from intervening in South Africa’s banks’ decision to close the Gupta bank accounts. The hearing is set to go on till Thursday.

On Wednesday, South Africa will pause to bid farewell to beloved Struggle icon Ahmed Kathrada. A host of political dignitaries are expected to attend the funeral at the Westpark cemetery in Johannesburg. Former president Kgalema Motlanthe, who is a board member of the Ahmed Kathrada Foundation, will deliver the eulogy.

There will be one notable absence. Kathrada’s wish that Zuma not speak at his funeral was communicated to the president. So while the ANC’s top brass and members of the opposition will be in attendance, Zuma is expected to stay away.

While Kathrada is laid in his final resting place, Zuma will be pondering his decision. It seems inevitable that he will swing his axe. The question is when and how much mayhem will ensue once he does. DM

Photo: President Jacob Zuma and Minister of Finance Pravin Gordhan during a meeting with business and labour leaders at the Union Buildings in Pretoria. South Africa. 09/05/2016. Siyabulela Duda / GCIS