Remember ‘Comrade Kathy’ and learn from his life 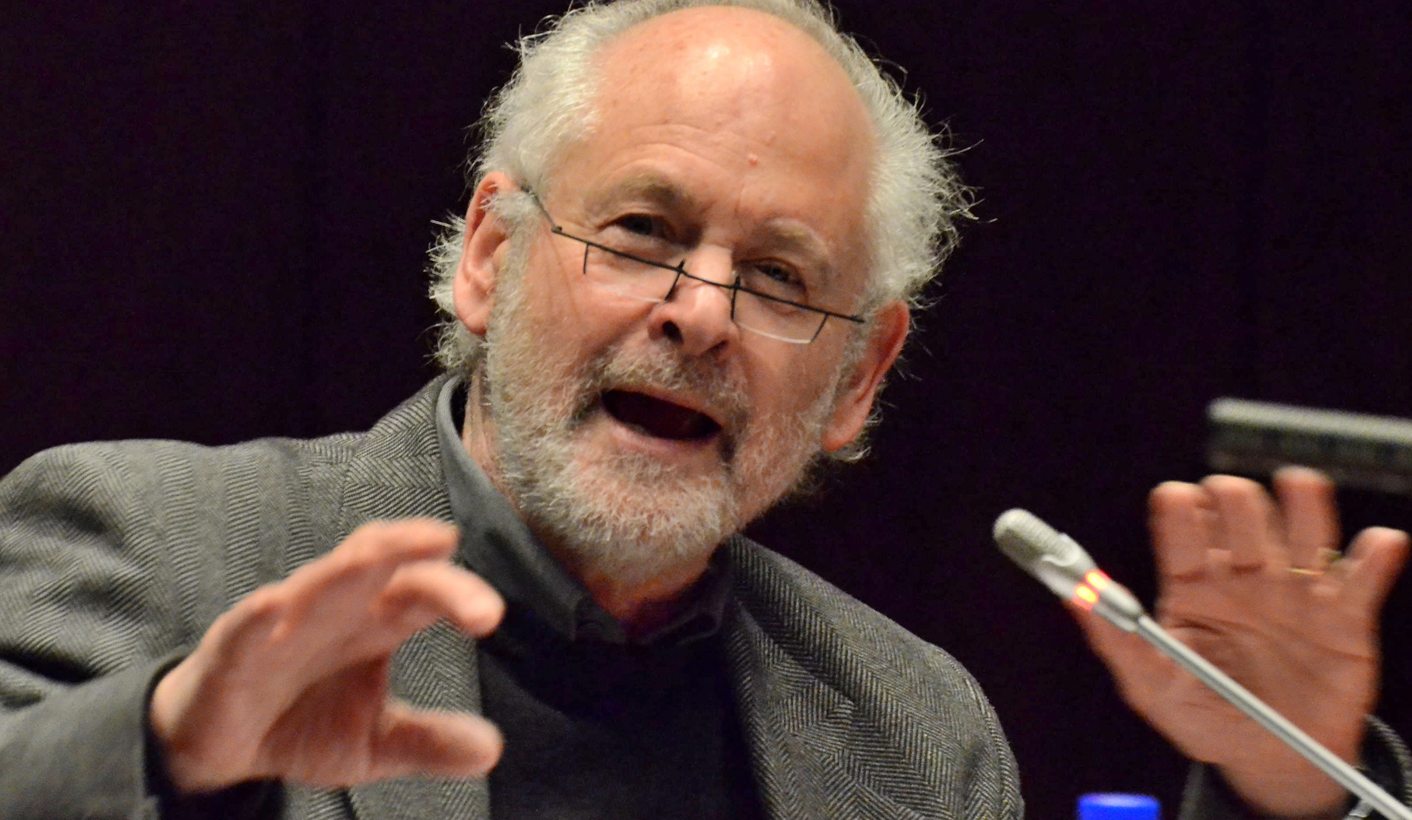 It is important for those who remember Ahmed Kathrada (Comrade Kathy or Uncle Kathy as he was known) to honour his legacies. That means not to be consumed by grief, though we are obviously sad, but to act in fidelity with his life, carrying out all our tasks with humility and integrity. Kathrada was deeply pained by the corruption and dishonesty so evident in the ANC that he loved. Those of us who wish to rebuild the promise of 1994 need to bend all our efforts in ensuring that those values of modesty, humility and integrity, exemplified in Kathrada’s life, come to prevail. By RAYMOND SUTTNER.

Sad as the passing of Ahmed Kathrada is, we need to use this occasion to draw lessons from his life. Kathrada is one of the last of a generation of political figures who built the Congress Movement, consisting of the ANC, Indian Congresses, South African Congress of Trade Unions, Congress of Democrats and the South African Coloured People’s Organisation. It was a mighty force that stressed the need to unite all the people of South Africa experiencing oppression or, as whites, willing to combat oppression and build a united democratic South Africa. Initially the alliance that was built was referred to as multi-racial, but gradually the term non-racial came into existence, envisaging that the basis for unity would not be separately organised people, though this separate organisation did persist. Nevertheless an overriding notion of commonality came to prevail – what Chief Albert Luthuli referred to as building a “common society”.

Kathrada, as a youth, was involved in the early days of building this alliance and upbraided and challenged the then Africanist Nelson Mandela for his “exclusivist” approach, leading Mandela to report the young man to his organisation. They were later to become life-long friends and comrades in the ANC/SACP underground, in prison and afterwards.

Luckily for historians, Kathrada has left much written material. His important letters from prison, despite passing through the censors, still reveal a great deal of the combination of pain, defiance and the building of an alternative experience by the prisoners on Robben Island.

Kathrada’s later memoirs provide a more substantial account of his personal development. Characteristically, its strength lies in the first place in bringing into prominence the relatively unknown sacrifices by Indian people in the course of the struggle. Without works such as this, a new generation may know little of the pioneering resistance of the Indian community. In Kathrada’s time (preceded by that led by Gandhi, some decades earlier), Indian men and women were prepared to be jailed in large numbers in the Passive Resistance Campaign of the 1940s and this inspired the ANC Defiance Campaign of 1952.

Kathrada operates on the national scale, but he remains connected with his early experiences and the small towns that he knew in his youth. In his memoir, he weaves his personal background into the national and international struggle against apartheid. His home town of Schweizer-Reneke is affected by national and international aspects of the struggle. He relates an important account of a white backlash against the government of the then recently independent India’s pioneering international efforts against the apartheid regime. When the Indian government bans the supply of jute, essential to production of bags needed for storing maize, white farmers faced a crisis, but retaliated by boycotting Indian stores.

The way the drama plays itself out ties into one of the strong themes of the book: not only the non-racialism of the anti-apartheid struggle, but also the strong informal ties between black people and some whites, the right-wing whites who are prepared, without payment, to “front” for Indian traders who are not allowed to purchase certain properties.

In the case of the backlash against the jute boycott, the whites who resist the boycott of Indian traders, despite being National Party supporters, do so because of their relationships with these traders. Kathrada describes the unique way in which Indian traders operated, the extension of credit where others refused (evoking the image of contemporary Somali and other immigrant traders in townships), and the hospitality offered across the colour line.

One of the weaknesses of many political memoirs and autobiographies has been the absence of “the personal”. Although developed in a limited way, Kathrada makes some important statements, which have not previously appeared in such works. While pacing in his cell after the Rivonia arrests he admits: “I must confess without shame or apology, uppermost in my mind always, is my life, my safety” (Kathrada’s italics).

It is significant that a famous leader has said this. Kathrada’s statement is important because it emboldens others to concede that it was not only purely heroic thoughts that crossed their minds at every moment. Kathrada’s honesty strengthens the trend, which is a necessary one. Those who write their stories should try to humanise the struggle rather than populate this literature with cardboard characters who never reveal personal weaknesses and fears.

In noting this statement of concern for his own needs, we should observe that it coexists with a rock-hard determination not to compromise on what he regarded as core issues and to serve the liberation movement without wavering. What is important is that by introducing this note of introspection, Kathrada shows the complex co-existence of thoughts about the self together with those of the wider cause; something, which many activists, wrongly, feel that they should suppress.

Another important element of the memoirs is that they reveal lesser-known personal costs that go beyond imprisonment. These are not unique to Kathrada. In his case, he formed a relationship with Sylvia Neame, jailed for Communist activities shortly after Kathrada; she was later released and exiled, where she married someone else.Kathrada admits to his ambivalence over “releasing her” to exercise this choice, something that was painful, but realistic.

Such destruction of relationships through imprisonment (and exile) was much more common than is acknowledged, and it is important that people understand that those who made these choices and experienced such consequences had the same personal needs as others. But, in addition to being locked away, they experienced the pain of ending relationships without any proper form of “closure”. (Neame, it should be noted, is the author of a history, The Congress Movement recently published in 3 volumes by HSRC press, which constitutes a significant re-reading of the movement).

Luckily for Kathrada, he was able to find personal happiness and love in his relationship with Barbara Hogan, whom he met after her release from prison in 1990. This was a formidable partnership that enriched both of their lives.

Kathrada was modest. He did not broadcast his achievements. Few people know that Kathrada ought to have been found not guilty in the Rivonia trial on legal grounds. But a decision had been taken not to appeal and he did not allow the fact that the evidence against him was more tenuous, to be a basis to break ranks with his comrades and enter an appeal against his conviction. (My understanding that similar choices were open to Denis Goldberg, the only white person convicted in the Rivonia trial, who also refused to appeal and served his sentence separately-because he was white — in Pretoria).

Although he was a leader in his own right Kathrada was content to conduct most of his activities in the background, whether through smuggling contraband newspapers on Robben Island, through conferring privately with Mandela and Sisulu, or conducting innumerable interviews about the struggle after his release. As a result of many of these interviews, generations of researchers learnt of the lives and political significance of Bram and Molly Fischer, Moses Kotane, Ruth First, Albert Luthuli, JB Marks and many others, who were well known to Kathrada.

We mourn the passing of Comrade Kathy at a time of turmoil in South African politics and much of this relates to the prevalence of corruption and dishonest practices, which we know pained Kathrada deeply. Few of those who were involved in the transition to democracy imagined that the ANC that Kathrada and his older mentors, Sisulu and Mandela, so deeply loved would one day be so closely identified with corruption.

Those of us, who cherish the legacies of Kathrada, owe it to his memory to do what we can to rebuild the democratic and ethical promise for which Kathrada fought so hard. We owe it to him and others who sacrificed so much to turn this into a reality. DM

Raymond Suttner is a scholar and political analyst. Currently he is a Part-time Professor attached to Rhodes University and an Emeritus Professor at Unisa. He served lengthy periods in prison and house arrest for underground and public anti-apartheid activities. His prison memoir Inside Apartheid’s prison will be reissued with a new introduction covering his more recent “life outside the ANC” and will be published by Jacana Media in the first half of this year. He blogs at raymondsuttner.com and his twitter handle is @raymondsuttner