Anti-xenophobia march: ‘There’s no reason they should hate us’ 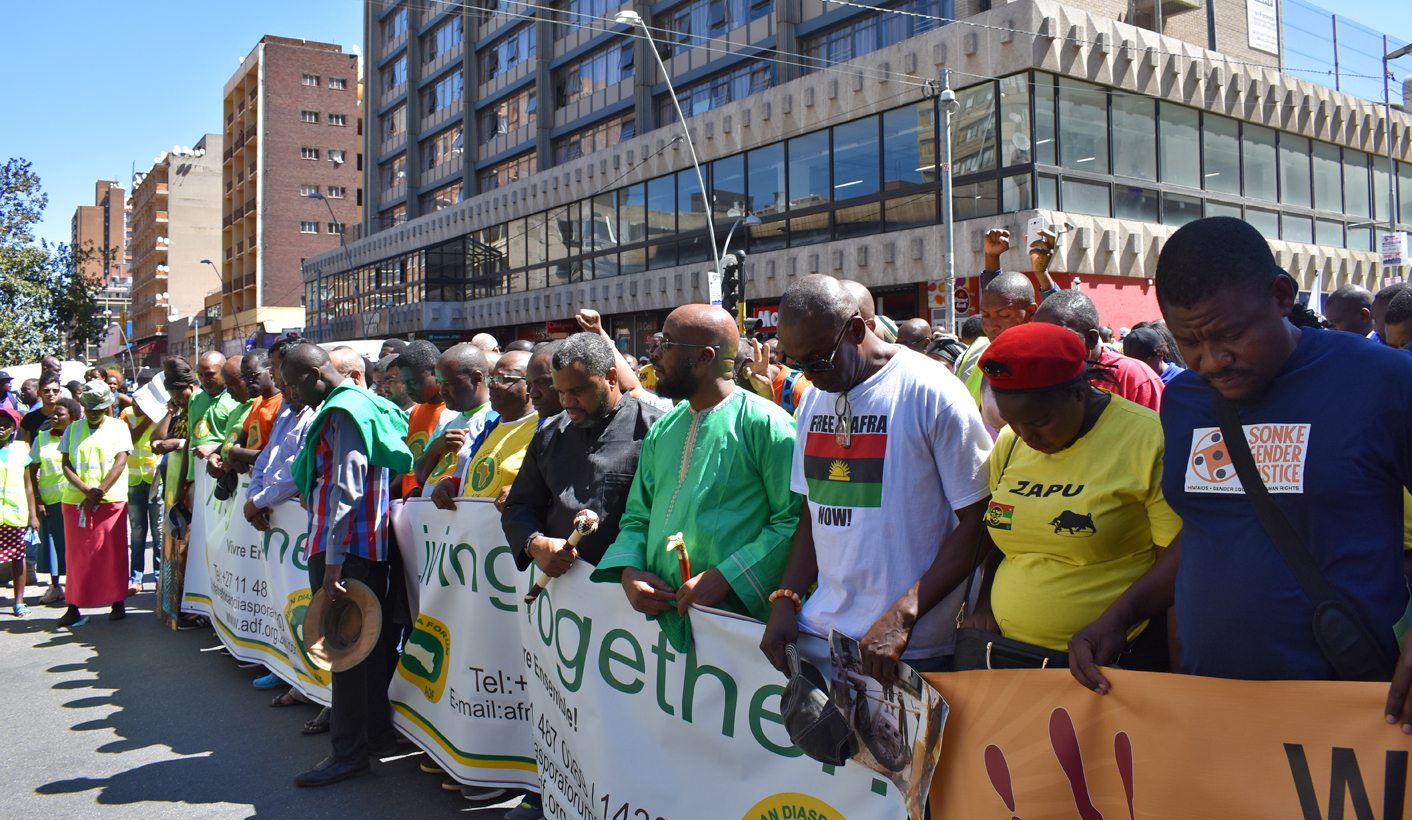 The late, great Ahmed Kathrada spoke loudly against xenophobic violence. In Johannesburg on Tuesday, 300-plus protesters from all over the African continent did the same. By SIMON ALLISON.

On Tuesday in Hillbrow, 300-odd marchers paused in the middle of a busy intersection. They closed their eyes, and hung their heads, and for a minute honoured the memory of the late, great Ahmed Kathrada.

“This is a day of national mourning, and we are mourning too,” said a representative of the African Diaspora Forum. For although the majority of participants in this particular march were not South African, many have nonetheless adopted Kathrada – and the principles he stood for – as one of their own.

The march, planned long before Kathrada’s death, was aimed at protesting against xenophobic violence in South Africa. Beginning at the bottom of Constitution Hill, marchers wound their way through Hillbrow before ending in the Library Gardens on the other side of town. Participants were from all over the African continent, including Cameroon, Cote D’Ivoire, Ethiopia, Nigeria, Somalia, and Zimbabwe.

Photo: The anti-xenophobia march through Hillbrow attracted a crowd in excess of 300 people. (Simon Allison)

“We’re here to agitate against xenophobic violence, illegal detention, and racism,” said Stanley Egwuatu. “The current system is contravening the Constitution. We’re just asking for the rule of law.”

The 47-year-old from Nigeria has been on the wrong end of that system before. In 2011, he was arrested by policemen who refused to accept that his paperwork was genuine. He was detained in Hillbrow police station for six days without charge. “I was so mad about how the system works,” Egwuatu said.

Photo: Stanley Egwuatu, 51, from Nigeria, was detained without charge for six days because police doubted the veracity of his documentation. (Simon Allison)

Another Nigerian, 53-year-old Obi Amadi, says that he sees parallels between how foreigners are treated in South Africa and how minorities are treated in Nigeria. “We have been marginalised in Nigeria, and now we come here and there is huge racism from our fellow blacks. There is no substantial reason why they should have that hate against fellow Africans,” he said.

Lebani Sirenje, an artist, brought one of his paintings with him. The close-up portrait depicts Nelson Mandela and Graca Machel – a South African married to a Mozambican. “It’s symbolic. It shows we are one as an African nation. This painting depicts how we can live in society together without fighting,” said Sirenje.

Photo: Lebani Sirenje, an artist from Zimbabwe, marches with his portrait of Nelson Mandela and Graca Machel. (Simon Allison)

It wasn’t only foreigners in attendance, with South African civil society well represented too. “We want black people to stop beating people from outside. We want everybody to be equal. South Africa is for all, it’s supposed to be mixed,” said Andiswa Nxokweni, who attended on behalf of the Leratong Child Rescue and Advisory Centre.

The march drew crowds of curious onlookers. Some watched at street level, while others peered down from Hillbrow’s balconies. To the credit of both march organisers and the local community, the atmosphere remained peaceful throughout.

To the casual ear, there was little to separate this particular march from other South African demonstrations. Organisers led the crowd in frequent refrains of “Amandla! Awethu!” and co-opted ANC struggle songs for their own cause. Only the beat provided by a pair of drummers from Cote D’Ivoire signalled that this particular issue has its roots beyond South Africa’s borders.

Another popular refrain: “Phansi Mashaba, phansi!”. Herman Mashaba, the new Democratic Alliance mayor of Johannesburg, has been widely criticised for stirring up xenophobic tensions with his vocal criticism of, and promised crackdowns on, undocumented migrants. The African Diaspora Forum (ADF), an NGO representing South Africa’s migrant communities, which organised Tuesday’s march, for months has been trying to arrange a meeting with the mayor, with no response. The mayor’s office has also refused to acknowledge receipt of a memorandum addressed to the mayor which outlines the ADF’s concerns.

Gauteng Premier David Makhura has been more receptive. “Do not worry about Mashaba. He is not the premier of Gauteng‚ the minister of Home Affairs or the President of the country. You do not need permission from him since these are issues dealt with at national government,” he said in a speech delivered at the conclusion of the march.

Makhura concluded: “If you feel you do not want to go to the land of the likes of Donald Trump‚ in which you are no longer welcomed‚ come to South Africa because here you are welcomed. Once you are in Gauteng‚ you are my problem.”

One suspects Ahmed Kathrada would have approved. DM