Episode Four: SA’s ‘Serial’ podcast goes on an AK-47-fuelled car chase with the cops and makes a discovery that changes the case completely 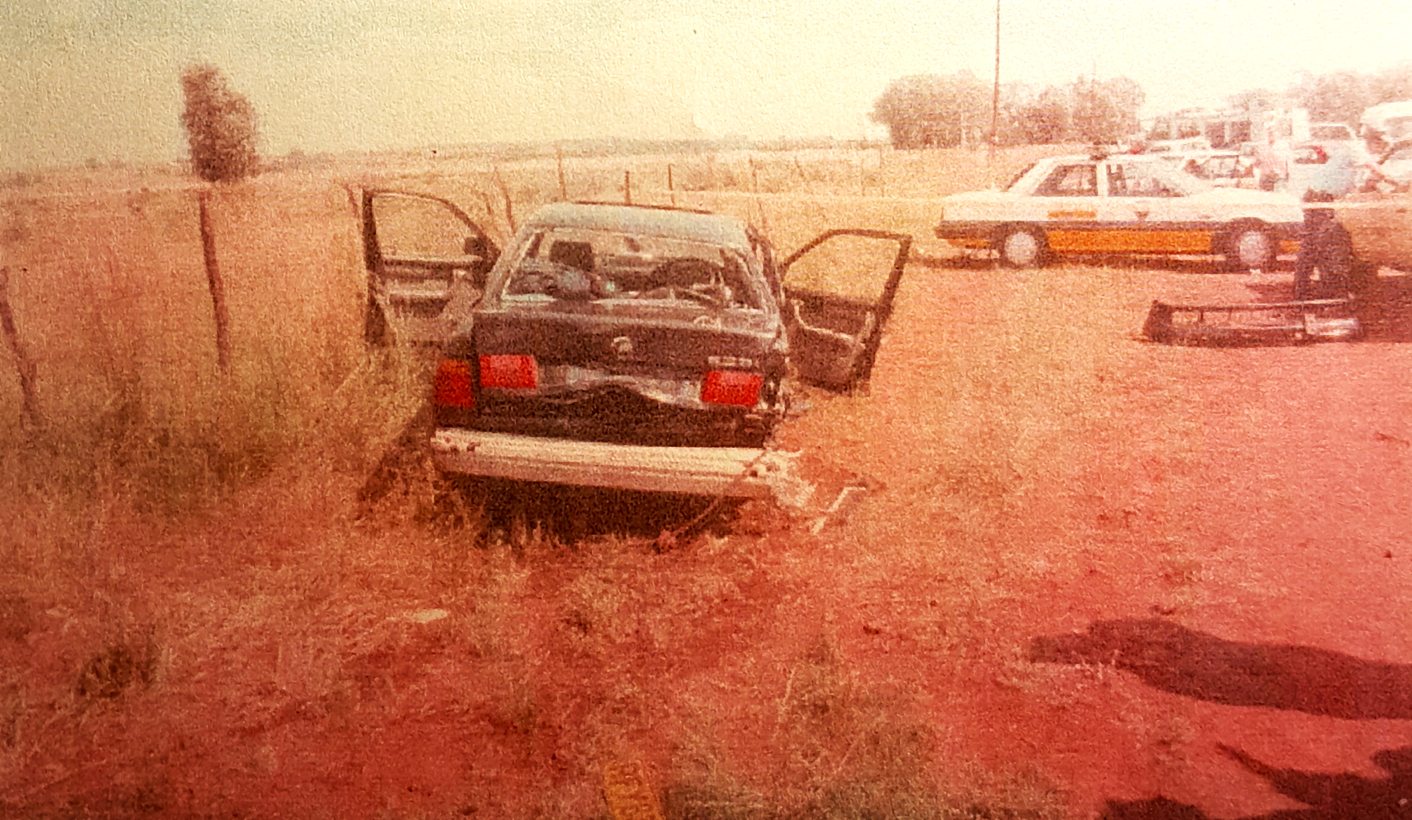 In Episode 4 of the Alibi podcast series we spend a morning in a Wimpy eating bacon and eggs, witness a man shoot an AK-47 from a moving car back at the cops and find a second set of statements, ones that never made it to trial, that give us a completely different picture of the case. By PAUL McNALLY.

I sit in the Wimpy with the paperwork for the case spread out on the table. There are photos next to the napkins – they are of corpses and crashed motor vehicles. Families are here at the Wimpy in Vereeniging for a midweek treat and meanwhile I am trying to orientate myself to the key locations of our murder, robbery, car chase story.

From where I’m sitting I can look out on the exact spot where one of the security guards was shot down dead. The case I am looking into, over eight weeks for the podcast and radio series Alibi, is of the double murder and robbery that happened here in 1994 at the Checkers shopping centre, which the Wimpy is part of. The only man who was convicted of the crimes is Anthony de Vries and when I met him in 2015 he had served 17 years in prison and had always insisted that he was innocent. I am exploring whether Anthony is guilty or if he was a victim of a wrongful conviction (the first three episodes are available for listening to on soundcloud and download on iTunes) and in the fourth episode I am at the Wimpy to explore the car chase between a BMW and the police that occurred near the Checkers on the day of the robbery.

My Wimpy waitress brings me my very welcome plate of bacon and eggs. Her hair is pulled up high on her head and she is wearing heavy black make-up. Her eye catches a particularly gruesome photo from the case and she says she’s intrigued. I tell her the details of the case and we chat about what it is like to live in the area. With gusto the waitress goes to fetch me a map so she can point out the intersection where the car chase started. Anthony, according to the state, was driving the BMW as a getaway vehicle to the robbery.

While the BMW was being chased, at high speed, a man manoeuvred himself out of the passenger side of the car. He was holding an AK47 as he climbed out and proceeded to shoot back at the police. These shots at the cop car were how Anthony picked up his two attempted murder convictions (though he couldn’t possibly have been driving the BMW and also be a passenger shooting backwards out of a different window at the same time).

The Wimpy waitress tells me the intersection isn’t too far and that I can actually walk there.

What I discover, as I visit the physical sites associated with the case, firmly swings me back to believing Anthony is innocent. I find out there are two conflicting sets of statements from Anthony’s case, written by the same people but just years apart. One set was written when he was arrested and the other when he was at trial. I can’t stress how different these versions are in the details, especially with how they talk about Anthony. The important part is that these contradictions in the statements never came up at trial; the original set was lost and only found years later.

I pay my bill at the Wimpy, thank the waitress and promise to keep her updated. After visiting the intersection where the car chase took place I track down the man who found the original set of statements. He is an incredible character and how he came across them is an amazing display of chance. And finally I get a hint of who was the internal investigator on the case (so a person who looks at the abuse and wrongdoing of police officers). Together these sources help us truly fill in what happened on that day of the murder and robbery in 1994 – and it is shocking the evidence that emerges that points in Anthony’s favour. DM