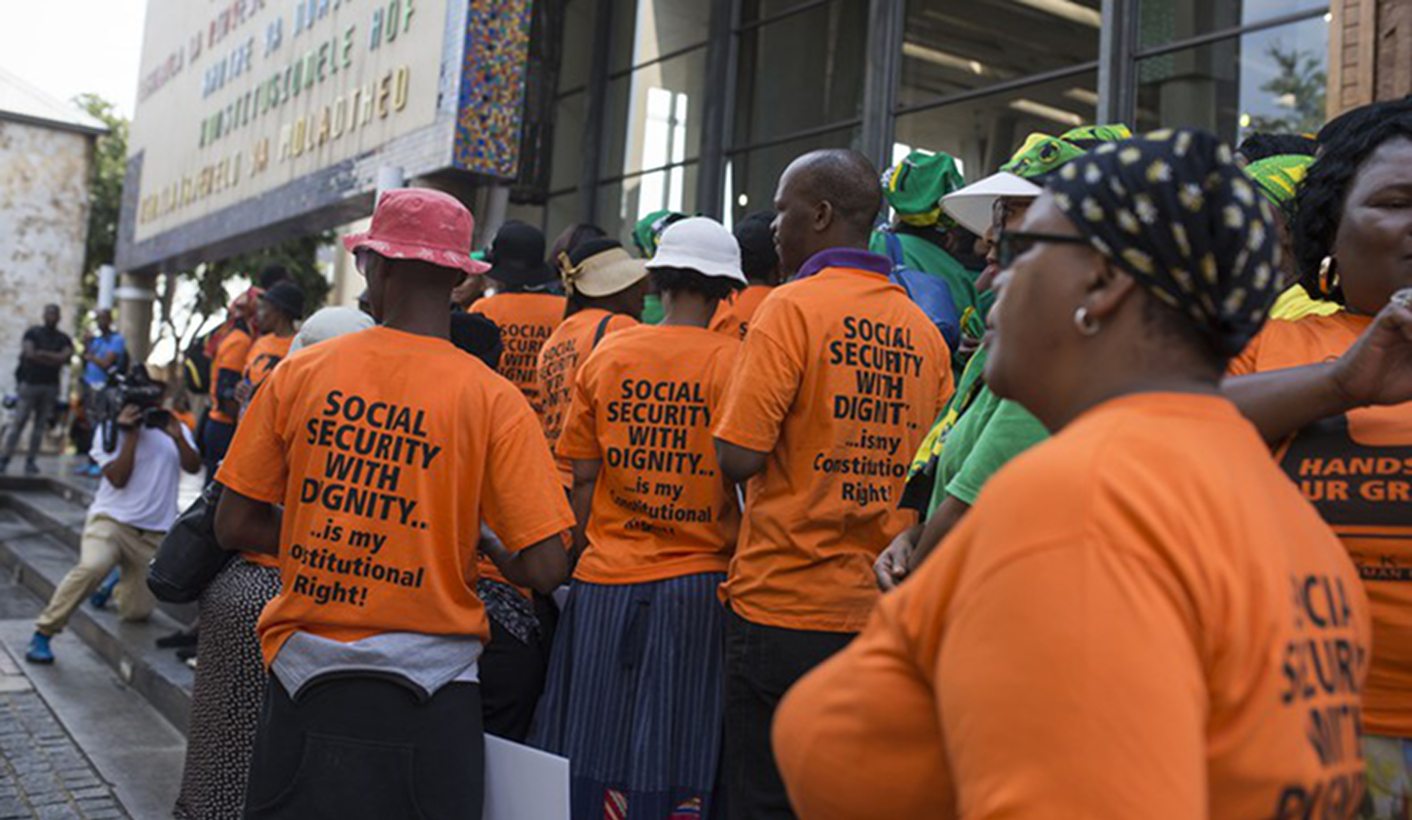 As the main South African investor in Cash Paymaster Services’ parent company, Allan Gray has been under the spotlight over the social grants payment controversy. As a result, a bigger investor, the World Bank, has not received much attention, writes Erin Torkelson for GROUNDUP.

With a 17% stake, Allan Gray is the second biggest shareholder in Net1 UEPS, parent company of CPS, which delivers social grants to 17-million South Africans. Net1 also owns other subsidiaries which make profits from selling financial services to grant recipients.

As the drama over the South African Social Security Agency (Sassa) payment contract has played out over the last few weeks, Allan Gray has been under pressure to answer for its investment, seen as increasingly controversial.

But this focus on Allan Gray has obscured the largest institutional owner of Net1. The World Bank’s investment arm, the International Finance Corporation (IFC), edges out Allan Gray with a 19% share.

The timing of this investment is interesting. The IFC investment came well after the CPS tender had been declared invalid by the Constitutional Court (April 2014). It also came after Sassa promised the court it would develop its own capacity to pay grants when the CPS tender ended (November 2015).

The IFC investment also came after the Black Sash had launched a campaign to stop unlawful deductions from beneficiaries’ accounts by Net1 and affiliated companies, and even after the Minister of Social Development issued new regulations to stop deductions from social grants in February 2016. The regulations were published in May 2016.

In other words, there was substantial information in the public domain questioning the ethics of Net1, particularly its use of beneficiary information and proprietary technology to profit from the social grant programme.

But in a press statement about its investment, the IFC’s Atul Mehta trumpeted Net1’s prowess as a supplier of technology for financial inclusion in South Africa. “Net1 has created impressive proprietary technology for the delivery of services and demonstrated its effectiveness in South Africa,” Mehta said. Mehta also promised that the IFC investment would help Net1 expand regionally, “especially into African countries where there is limited banking infrastructure and availability of financial services for the poorest segments of the population”.

So why did the World Bank, one of the largest development finance institutions in the world, ignore all the information circulating about Net1 and, instead, invest R1.6-billion, less than a year ago?

The answer is to be found in the way the World Bank has promoted social grant programmes worldwide for the last decade. The bank has developed a discourse about what a “good” social grant programme should do: pay grants electronically to beneficiaries verified by biometric technology, through a competitive tender process resulting in the selection of a bank or private financial firm, which can profit by cross-selling products to beneficiaries. The World Bank has consistently used the South African case as a model.

From the early 2000s, there was a series of debates between academics and activists at conferences and in journals about the “best” use of international aid money, with some people arguing that the billions spent on international aid should not be tied up in government but should be given to the poor directly.

These debates sparked numerous books and articles promoting and evaluating social grant programmes. Evidence from Mozambique, Brazil, Mexico, Bangladesh and South Africa seemed to prove that giving money to the poor offered far better developmental returns than other types of aid. For example, a well-publicised study by Marisa Coetzee demonstrated that children who received a Child Support Grant grew taller, studied longer in school, and benefited from increased expenditure on food.

By the late 2000s, since much of the global South was experimenting with social grant programmes – and their efficacy was seen as beyond dispute – development technocrats clamoured to demonstrate the “best” possible payment arrangements for social grants. Several “principles” were put forward.

Many different reports – from the World Bank Development Research Group, which includes multilateral partners (G20 Partnership for Financial Inclusion), funding agencies such as the Bill and Melinda Gates Foundation and the Department for International Development (DFID) and consultants like the Consultancy Group to Assist the Poor (CGAP) and Bankable Frontier Associates (BFA) – began to advocate an evolution from a cash-based pay-out system to an electronic transfer system. These development publications argue that although every payment system must be responsive to the local context, all should be designed to ensure benefits reach the correct beneficiaries on time. The resonances between this statement and Sassa’s slogan – “Paying the right social grant to the right person at the right time and place. Njalo!” – is clear. Since cash is vulnerable to theft and laborious to transport, electronic delivery is seen as the only long-term option for a safe, cheap and reliable grant program.

In tendering for a social grant payments contractor in 2011, Sassa adopted just this argument. The 2011 Sassa tender documents (quoted by CGAP) followed this logic: “The overall intent is to shift from the current largely cash-based payment model to a more electronic-based payment model.”

These publications are also very concerned with inefficiencies, “leakages” and theft in social grant programmes. The argument is that there is a substantial risk that desperate people might attempt to defraud the state and apply for double benefits. Since poor people worldwide often lack identity documents, the best way to ensure that they are not getting paid twice is through biometric verification, the argument goes. A 2013 World Bank blog called biometric technologies the “silver bullet” for poor populations in India. The author claimed that a simple fingerprint or iris scan can diminish “leakage,” by linking recognisable physical data with financial information, including credit history, electronic debits and welfare payments.

Again, Sassa bought into this logic and made biometric verification “mandatory” for bidders for the 2011 tender.

The World Bank literature advocates using private companies to pay social grants. Banks or other private financial institutions are seen to be more efficient than governments at distributing welfare payments. The authors suggest that a competitive tender ensures “good service” for beneficiaries and “reasonable prices” for government.

Sassa obviously bought into this suggestion and sought to consolidate South Africa’s previously decentralised payment system under one, national-level tender.

The World Bank argues that banks or other service providers are driven by profit, and are loath to expand their services without a financial incentive. Development technocrats have bent over backward to demonstrate how public programmes for the benefit of the poor can also be profitable. The 2006 Scoping Report on the Payment of Social Transfers, funded by DFID and written by Bankable Frontier Associates, recommends government subsidies and user fees, and also advocates for the sale of additional financial products, which they call “add-ons” and “add ins.” Similarly, the consultancy group, CGAP, completed a series of publications on how to make “the business case” for financial institutions by “cross-selling” products.

In all this literature, there is one caveat, which prophetically describes South Africa’s current social grant crisis: “The regular cash flow of grant recipients may also make them an attractive target for lenders who may use irresponsible marketing techniques to lead to unsustainable indebtedness.” Indeed, the South African social grant system has encouraged an incestuous relationship with one financial provider that both pays and sells products to grant recipients.

The only thing that a social grant programme really needs to do is pay beneficiaries. And there are lots of less technologically sophisticated ways of going about this. But, at an international level, the World Bank has campaigned for a particular set of payment arrangements and in South Africa these arrangements have been adopted, to the point at which any simpler system seems unthinkable.

Thus it is unsurprising that the World Bank, through the IFC, invested in Net1 even after many questions were raised about corporate exploitation of grant recipients. This was, in fact, the very type of programme the bank had been advocating.

The bank has considerable power in relation to its investment, as Net1’s website shows. In its corporate risk analysis, Net1 identifies a significant risk in relation to the IFC’s investment: Net1 granted the IFC a “put right”.

A “put” or “put right” is a stock market option, which gives the owner the right to sell an asset at a specified price under certain conditions to a certain party.

The IFC’s put right requires Net1 to repurchase any shares sold to the IFC if certain events take place.

The put right can be triggered if Net1 is “the subject of a governmental complaint, a court finding or an indictment alleging that we engaged in specified corrupt, fraudulent, coercive, collusive or obstructive practices”.

There is plenty there for the IFC to ponder as it considers its investment in Net1. DM

Erin Torkelson is a PhD Candidate at the University of California Berkeley and a former intern at the Black Sash. Views expressed are not necessarily those of GroundUp.

Photo: Demonstrators outside the Constitutional Court during hearings on the future of the social grants payment system. Photo: Ihsaan Haffejee