TRAINSPOTTER: Not Doomed – Ntlemeza, unrepentant and unbreakable, does mega churching 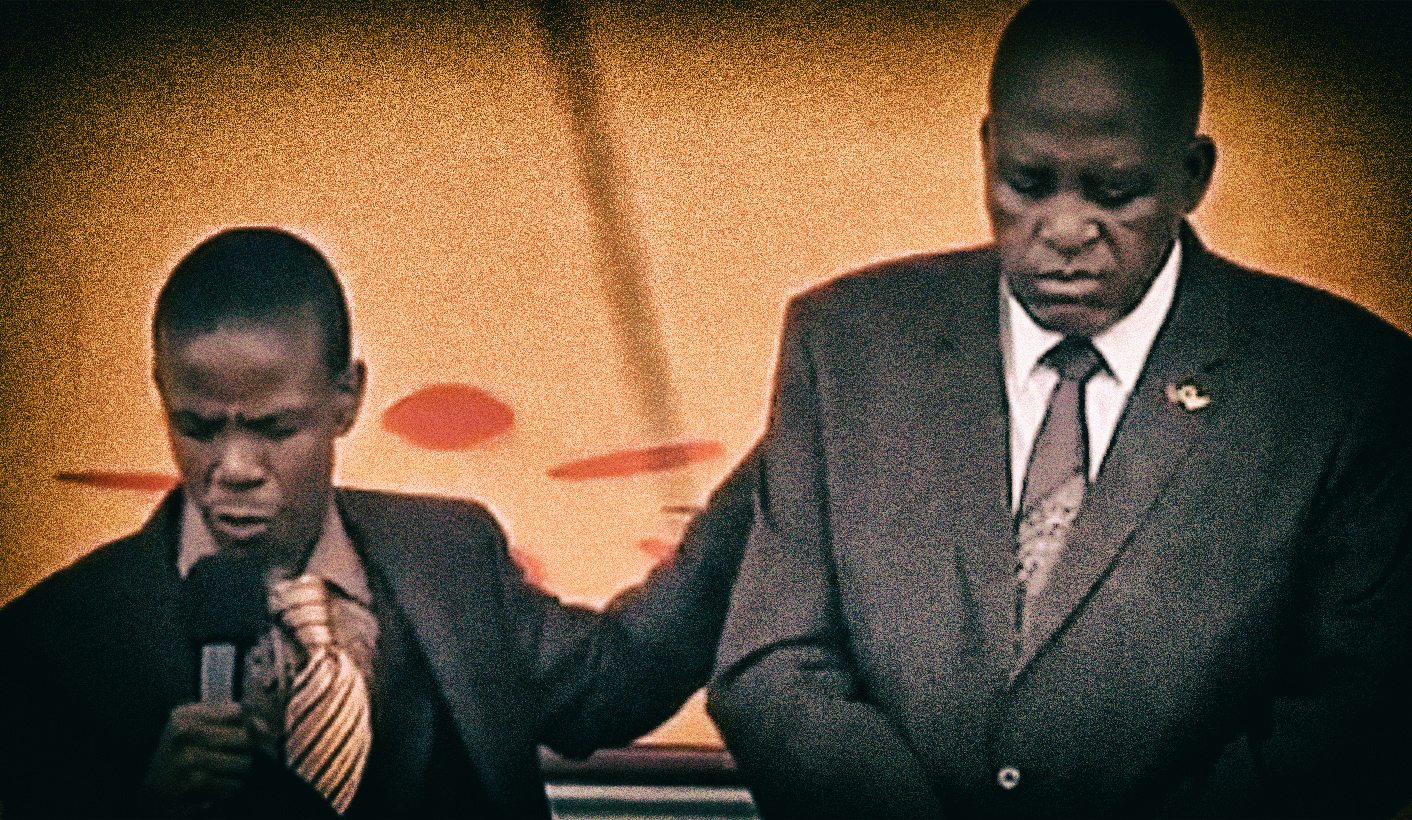 Following perhaps the strangest media invite of the year, Lieutenant-General Mthandazo ‘Berning’ Ntlemeza made a first public appearance since Friday’s disastrous Gauteng High Court ruling regarding his legitimacy as head of the Hawks. (As in, he has none). The venue was the Incredible Happenings Church, pastored by the celebrity prophet, Mboro. There were no apologies, no acknowledgement of the damage done. Just assurances from God, via Mboro, that the General was in very good standing. And if anyone was going to be blessed by a cleansing faceful of Doom, it was members of the media. By RICHARD POPLAK.

“Life had already given him sufficient reasons for knowing that no defeat was the final one.”

? Gabriel García Márquez, The General in His Labyrinth

The Incredible Happenings super church stuffs its vast congregation into a series of interconnected tents that stretch the length of two football fields. Katlehong, Ekurhuleni, is full of religious institutions, but even God himself would be astonished by Incredible Happenings’ scale. As far as sacred architecture is concerned, the dusty white pavilion is significantly less awe-inspiring than, say, Gaudi’s Sagrada Família, but celebrity pastor Paseka “Mboro” Motsoeneng probably has other priorities. But the entrance to the ad-hoc structure is announced by the Prophet’s BMW i8 (suggested MSRP, incl. VAT, R1,985,000), which lurks shark-like under a gazebo branded with his likeness. Inside, the church was as full as the ANC says its rallies are – a great colourful cross-section of Katlehong life, all donned in their Sunday best, standing on a carpet that looked as if it had been yanked from a crime scene.

The good Prophet, diminutive as he may be, wields a formidable baritone, and displays a chiseler’s wit. He ministers firmly within the mainstream of global evangelical Christianity, which is to say that no one ate snakes, and nor did anyone levitate while speaking Esperanto. If one were to describe his brief, it would be that Tata Mboro fills in the gap between the grim panoply of 21st century diseases caused by sugar consumption, booze and existential sadness, and the lack of affordable healthcare options to remedy them.

“Every disease and sickness is the work of the devil,” he boomed. “You don’t submit to it.” He placed his hand on the stomachs of his congregants and coaxed the devil out of their tumid bellies. “Out, Devil, in the name of Jay-zuz!”

As expensive as the Prophet may be, he’s cheaper than Discovery.

But if Mboro could remedy the symptoms of cancer, diabetes, renal failure, erectile dysfunction and halitosis, could he fix Major-General Berning Ntlemeza’s floundering career?

Let’s pause this religious service for a very brief recap: despite a ridiculously checkered career as a cop who doesn’t recognise lie from truth, Ntlemeza was appointed as acting national head of the Hawks in September 2015. In November 2015, the Helen Suzman Foundation wrote to Police Minister Nathi Nhleko, asking for him to explain why one of the dodgiest men in the South African police was handed an elite crime-fighting unit. Was this a case of police homeopathy – treat like with like – they wanted to know? The foundation asked for evidence that statutory requirements had been followed, and for copies of documentation used in making the decision. As with everything in South Africa, lawyers were called in to sort it out. On Friday, at the Gauteng High Court, a judge determined that Nhleko ignored two court judgments, which had found that Ntlemeza lacked integrity and honesty when he was appointed.

In other words: Busted.

It was a bruising judgment, and in any normal country, Nhleko and Ntlemeza would be slinking their way towards high-paying jobs in the risk division of Goldman Sachs. Instead, Ntlemeza is filing an appeal; in the meantime, he remains head of the Hawks.

And there sat the Lieutenant-General, on an ornate hyper-white couch that is best described as “patent adolescent polar bear testicle”. Ntlemeza looked grim, his massive hands resting on his left knee, his face creased and rumpled like a winter duvet. It looked as if he was trying to mimic humility, and doing so, appeared badly constipated.

“General, the people believe in you, the congregation believes in you, Mboro believes in you,” intoned the Prophet. Mboro praised the General for his sound work on “defeating” drug crime.

Ntlemeza sat and listened to stories from the congregation, and these were not happy stories. They were long, incredibly detailed, flecked with rage and sadness. Indeed, this country is sitting on great volcanic repositories of anger, and it was on full display. To sum the stories up: ridiculously horrible problem results in death of a loved one, which results in their missing body parts being stolen, which results in a ridiculously negligent medico-policing establishment giving victim the run-around. The subtext was: Mboro serves as a last hope against an atavistic evil practised by dark sangomas and muti purveyors – a fact only underscored by the presence of his friend, the Lieutenant-General.

As it happens, we find ourselves on the ass-end of the Enlightenment era’s burnished rationalism – we can no longer trust the truth. So maybe Mboro isn’t just a dancing, singing shyster, but an actual prophet debugging the matrix’s faulty code. Maybe you CAN cure cancer by shooing away the devil, and maybe the vicar marshalling wielding that energy deserves a space-aged German sedan for his efforts. Regardless, it doesn’t really matter either way. Those are bigger questions for another time.

What was of immediate concern was the point of this strange junket. Why was the media invited to Incredible Happenings? Was it a reminder of the latent political power wielded by mega churches and their celebrity pastors? If so, who needed one?

Mboro started to nudge us toward an answer. “I am saying to my General, you are unbreakable, you are unmoveable, because God is your witness,” intoned Mboro. “God performs miracles. Your life was not started by man, it will not be ended by man. Even if the court says it’s over, it is not over. It can still be restored by a higher power.

“We have been looking for a long time, My General, to partner with a policeman like you. Because you are tough on crime.” And wasn’t that the nub of it? The congregation, like most congregations, was looking for a strongman. The particulars of Ntlemeza’s case were never mentioned; his guilt and past sins were meaningless. The Prophet was telling his flock not to care.

“My General, your life has not come to an end. It has just begun.”

Then it was Ntlemeza’s turn.

“I want to greet you, honourable journalists. I’m proud that you are here, even though you were not invited by me.”

True – the church invited us.

“All of us here, we have challenges. Even the journalists, you are all blessed today.”

Translation: even though we’ve written bad things about him, God still loves us.

Ntlemeza: “Our being here today is part of our campaign to talk to believers, including journalists, because they are also believers. They also have problems! Amen! Hallelujah!” – drum roll; ululations – “I’m standing here as a preacher from an Anglican Church. Phanzi corruption phanzi! Phanzi drugs phanzi. Phanzi illegal firearms phanzi!”

The General turned his attention to the congregation. “We hear that you are having a problem with the mortuaries,” said Ntlemeza. He referred to the missing body parts that formed the substance of those earlier stories. “The arm you loved is not there. The leg you loved is .. It is not there. But we are here! Those people with illegal firearms, their days are numbered.”

“The Hawks must go on with their work. Let’s assist them, as loving people of this country. I know that some of you have been speculating today. They can utilise the figment of their imagination and talk lies which they themselves believe about us, but we are unshaken. The people of this country want justice.”

Well, yes they do. To which Ntlemeza added:

“Our coming here is part of a campaign to talk to the Believers. Unlike criminals‚ you love our message and we also love talking to you.”

The head of an elite crime fighting unit, preaching Jesus to the faithful? Welcome to Trump’s America Zuma’s South Africa.

But the amount of love being showered on journos was truly astonishing. Ntlemeza praised us some more. And then the Prophet took over. I was waiting for the other shoe to drop from Heaven until, verily, it thunked upon our heads.

“Some of you are thieves,” growled Mboro. “But not all of you.” He told the story of a Daily Sun journo he claims to have stolen two of his cars. Ntlemeza nodded sagely, but did not seem in a rush to open a docket.

“Journalists,” prayed the Prophet, “you are people too. You have problems. Your children are using drugs. You are in debt. Some of the things you write are not even printed!”

Oh, accountability, where hath thou gone? The usual transference of blame; the standard bitching about “fake news”; the customary pimping of “alternative facts”; the typical appeals to populist Strongmanism. This was Berning Ntlemeza, the biggest sleazebag in Christendom, washing himself in Katlehong’s holy waters, reminding himself that the only censure that he’ll bow down before is God’s, AKA Zuma’s.

After the service concluded, and Ntlemeza was whisked off by motorcade, I encountered the pastor and his posse in front of his shining BMW. He gave me a sly little smile, and clasped his hands in sheepishly, as if to say, All in good fun. Staring down Judgment Day, who was mortal man to judge anything, let alone a General?