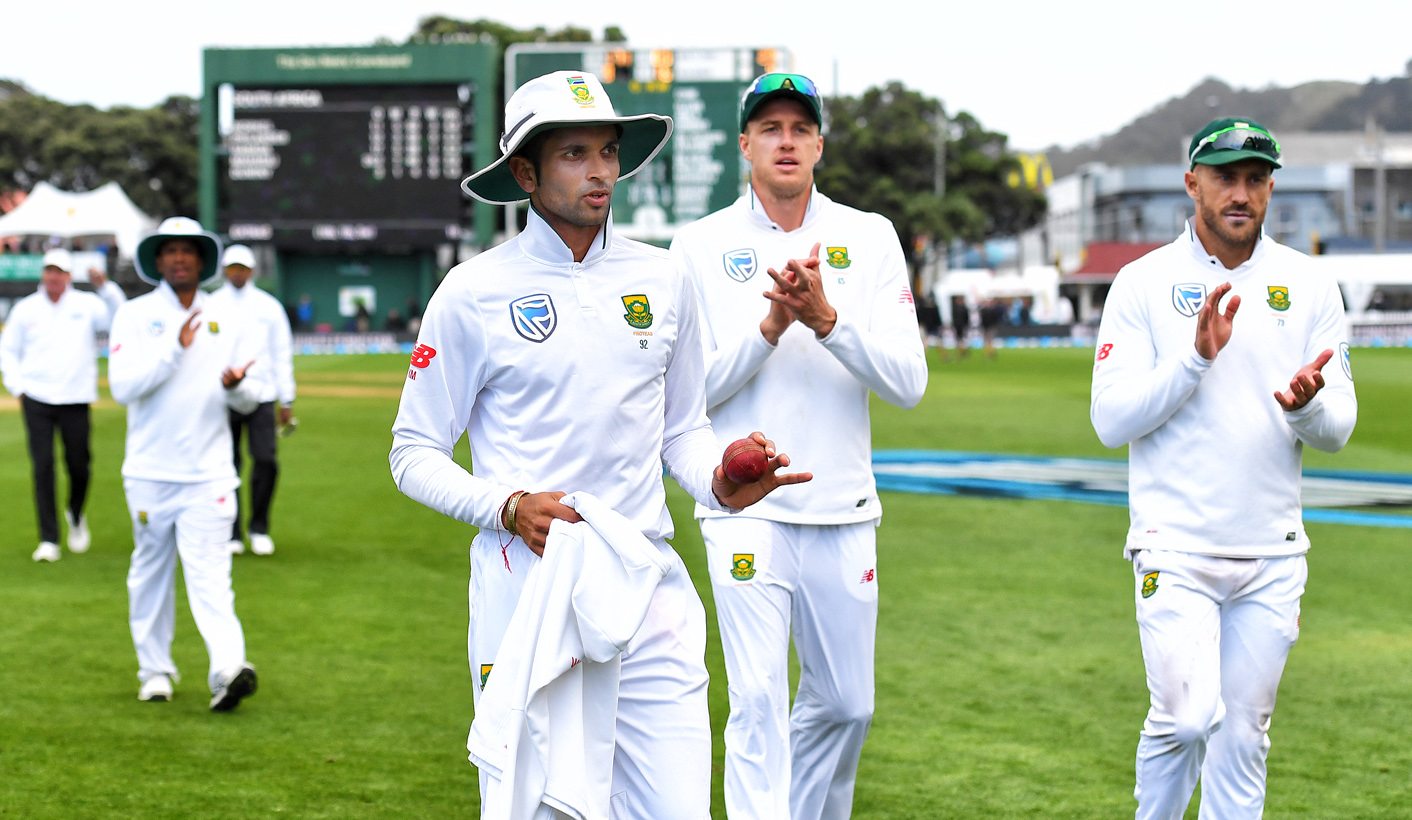 South Africa did what they do best in the second Test against New Zealand in Wellington: they clawed their way out of a hole. But they did so with three central figures who paint an interesting picture of the future trajectory of this team. By ANTOINETTE MULLER.

When South Africa stuttered to 94 for six in response to New Zealand’s 268 all out in their first innings, those fans brave enough to have braced the time zone divide could have been forgiven if they had turned their televisions off and gone back to bed.

“They have the runs, the other team must still get them” – wise words often uttered by parents in cricket-loving households never seemed more prophetic.

But here’s the thing about cricket: it’s a funny old game and it can change drastically and dramatically from one ball to the next, from over to session, from one day to the next and from one era to another.

In the second Test against New Zealand, South Africa went from staring down the barrel to winning inside three days. An extraordinary turnaround, engineered through Quinton de Kock’s aggression, Temba Bavuma’s persistence and Keshav Maharaj’s ingenuity, scripted a narrative that not only completely contradicts where the side was five years ago, but also paints an interesting perspective for the future trajectory of this side.

Enigmatic and frustrating, De Kock has played just 18 Tests for South Africa and scored three hundreds. Mark Boucher played 147 Tests and scored just five. De Kock managed just 91 in Wellington, but he scored that hundred seemingly unburned by the pressure South Africa was under and the fact that Jeetan Patel has had his number throughout this series. Not once did Boucher score a hundred at a strike rate of 71.00 or more. De Kock is yet to dip below 72 in his efforts.

This approach isn’t always effective and there will come a time when De Kock’s aggression costs his team, but to date it’s been nothing short of exceptional. His average is already edging towards 50.00 and he’s almost hit the same number of sixes (12) than Boucher did in his entire career (20). In part, De Kock’s stats are down to how cricket has changed in the modern era, but it’s also testament to his talent and his ability to change the course of the match – for better or worse.

Little over a year ago, no black African had ever scored a century for South Africa in Tests. No black African batsman had cemented a spot in the team. And now Bavuma is crafting match-saving and winning knocks for fun. Those who are quick to blame transformation when things go wrong haven’t dared to utter the words that it’s transformation that saved South Africa this Test.

Bavuma came into this series under some pressure. Two ducks against Sri Lanka and not passing 21 in seven innings meant that his efforts in Australia and against both New Zealand (in South Africa) and England before that had been quickly forgotten. But Bavuma does not shrink from a challenge and if cricket had an added column for “value of runs” to slot in alongside averages, his efforts would rank right up there. Unflappable and a real annoyance to bowlers, Bavuma is an asset to the lower-middle order and the perfect antithesis to De Kock.

And then came Maharaj.

With six wickets for just 40 runs in the second innings and eight in the match in total, the spinner outsmarted New Zealand at their own game.

Pitches in this series have at times been low and slow and Maharaj leads the wicket-takers’ list by some distance. He has bagged 13 scalps in the two matches – more than New Zealand’s Neil Wagner (seven) and Morne Morkel (seven).

A spinner flourishing in conditions that are conducive to their trade might not seem like anything significant, but the fact that spinners are allowed to thrive these days is.

If cricket was Pokemon, South African spinners have been as rare as Growlithe but about as effective as a Magikarp. It’s been eight years since a spinner took six wickets in an innings, 14 since one took consecutive five-fors and over a decade since that spinner was not a Paul.

In the afterglow of the Wellington rout, Maharaj heaped praise on his fast bowling partners.

“The seamers helped me out a lot, they made it difficult to score,” he admitted after his man-of-the-match performance on Saturday. “Vernon and Morne upfront with the new ball were the best that we know them to be. I put the ball in the right area and managed to get a few scalps here and there.

“Being a spinner of minimal variation I have to rely on consistency,” he added. “I had to try and stay as consistent as possible to help the captain. My job in the team is to hold up an end so that the seamers can strike in seam-friendly conditions. That is how I went about my business and luckily it paid off.”

Vernon Philander in particular was eye-wateringly effective when squeezing the batsmen. His economy in the first innings was 1.93 and 2.33 in the second, with Kagiso Rabada also turning the screws with rates of 3.10 and 2.23 respectively. Morkel was a bit more expensive, but that hardly mattered when hunting in such ruthless packs.

These nuances, from three players who are young in the context of the sport, coupled with the cantankerous efforts of Dean Elgar at the top of the order, the swagger of Faf du Plessis, the more-reliable-than-not omnipresence of Hashim Amla and their enduring ability to dig themselves out of a hole, suggests the side is well equipped for the tough challenges that lie ahead. DM