Sassa Crisis in Concourt: The Guardians, The People and...

Sassa Crisis in Concourt: The Guardians, The People and the Predator State 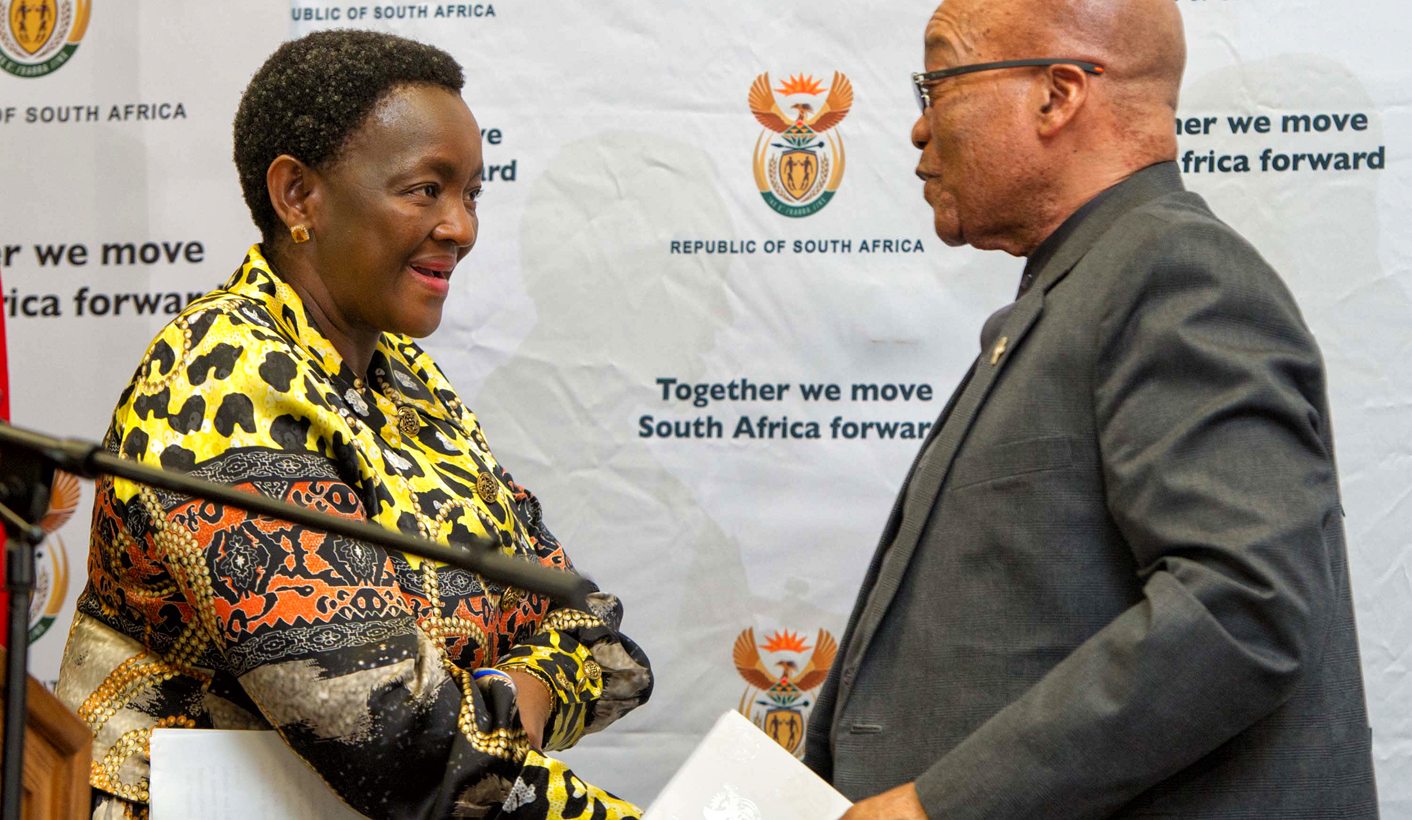 “Absolute incompetence.” Minister Bathabile Dlamini probably does not care that Chief Justice Mogoeng Mogoeng delivered this damning assessment of her handling of the social grants system. From her performance in the National Assembly on Tuesday, it is clear criticism bounces off her. But if the ANC has any hope of continuing to run South Africa, they should care. Their policy documents say they need to focus on building “a capable and developmental state”. But we have reached a situation where the judiciary, civil society and Chapter Nine institutions have to protect us from an executive and Parliament that repeatedly breach the Constitution and fail in their duties. By RANJENI MUNUSAMY.

Last week, the Office of the Public Protector sent letters to Social Development Minister Bathabile Dlamini and the director-general of her department requesting information about the multibillion-rand grant payment contract run by the South Africa Social Security Agency (Sassa). Daily Maverick has learnt that the inquiry was initiated by Deputy Public Protector Kevin Malunga as the basis of an investigation into possible maladministration in the awarding of the contract.

The expiry at the end of March of the invalid contract held by Cash Paymaster Services (CPS) to disburse the grants has opened the country to a crisis of epic proportions. The livelihoods of millions of South Africa’s most vulnerable citizens are under threat because of the “absolute incompetence” of people charged with their welfare. With Dlamini and Sassa failing to set up a legal and valid contract, National Treasury is unable to authorise the allocation of R11-billion to pay the grants.

The case was brought before the Constitutional Court by non-governmental organisation Black Sash, joined by Freedom Under Law (FUL), to ensure there is oversight over how social grants are paid from April 1 and that Sassa complies with their constitutional obligations to protect the rights of the over 17-million beneficiaries.

Dlamini, who has been insistent that “there is no crisis’, is resolute that CPS continues paying the grants, even if it means pushing the country to the precipice to ensure this is achieved. The conduct of both Dlamini and CPS boss Serge Belamant has been an assault on human decency and their swagger is based on the fact that at this late stage, there is no alternative. Belamant was arrogant enough to tell reporters at the court that the only other agency that could step in at this stage, the South African Post Office, would have to send “pigeons to fly around” to deliver the grants.

In court papers, Dlamini and Sassa argued that the Public Protector and Auditor-General should monitor whatever new or extended contract is negotiated with CPS, while the other parties, Black Sash, FUL and Corruption Watch want the Constitutional Court to retain supervisory jurisdiction. With the Public Protector’s office now looking into maladministration in the contract, Dlamini would not be able to use that institution as a buffer and wriggle out of accounting to the Constitutional Court.

The proceedings in the Constitutional Court on Wednesday were a masterclass in examining the failure of a government to perform its functions. The judges were irritated and perplexed as to why, given that the time period of the contract was known and legal advice was on hand, the minister and Sassa were not able to ensure a system was in place to pay the grants.

Chief Justice Mogoeng Mogoeng wanted to know from Andrew Breitenbach, the lawyer representing Dlamini and Sassa, why his clients did not do their jobs.

He said it was “embarrassing enough” that a contract awarded by her department had been declared unconstitutional and enquired why Dlamini had not spent sleepless nights ensuring that there was no recurrence.

“How to get to this level of what can be characterised as absolute incompetence?” Mogoeng asked. Breitenbach was unable to answer.

Mogoeng also asked probing questions of the advocates about why Sassa was not capable of disbursing the grants themselves. “Is it unthinkable that a properly resourced Sassa can shoulder the responsibility (to pay the grants)?”

Later he asked Breitenbach: “Why can’t we just focus on Sassa? Why can’t we order Sassa to do what it exists to do?”

This goes to the heart of the problem with the ANC government. Because of incompetence and incapacity of the state and its institutions to carry out their basic functions, their roles are outsourced, opening up opportunities for corruption and patronage to thrive.

In the ANC’s policy documents distributed for discussion this week, it is clear that the party is not oblivious to the problem. The draft strategy and tactics document says “there is a long way to go in building a capable, developmental state”.

“The state should be able to attract the best and the brightest in society, as part of their career paths. Professionalism in the bureaucracy and stability especially in the management echelons are critical.”

The document goes on to say: “Corruption and attempts at capturing state institutions to serve the interests of individuals and families should be combatted, both to ensure that the state meets its obligations and to maintain popular confidence in the polity at large.”

On paper, the ANC is an expert at diagnosing its own problems. In reality, it continues to promote outsourcing of government work to offset the incompetence of its deployees and lack of capacity of state departments and institutions. Recent history has shown that even presidential prerogative to hire and fire members of Cabinet has been outsourced.

But more than that, the ANC continues to shield those in its ranks who fail in their responsibilities, betray their mandate and breach their constitutional obligations. Last year the ANC was humiliated when President Jacob Zuma and the Speaker of Parliament were found to have violated the Constitution on the Nkandla matter. The ANC tried to protect Zuma from accountability for the Nkandla upgrades until he was made to pay back the money by the Constitutional Court.

The ANC is well aware that Dlamini is a hopeless failure and that the Sassa crisis is her doing. The leadership of the ANC has failed to call her to order because she is a bully who enjoys protection from a faction in the party. Zuma protects Dlamini because she is a useful idiot, running the campaign of his preferred successor, Nkosazana Dlamini-Zuma.

When Dlamini stood at the podium in the National Assembly on Tuesday to speak during a debate on the Sassa crisis, she received uproarious applause from the ANC. ANC MPs also ran interference for her during the debate, attacking and interrupting opposition MPs with frivolous points of order so that attempts to hold the minister accountable were disrupted. Like at her appearance before the Standing Committee on Public Accounts, Dlamini did not provide the National Assembly with any details about the way forward. She continued to blame the media and opposition for creating perceptions of a crisis.

Representing Black Sash in the Constitutional Court, Geoff Budlender said Dlamini made no explanation or apology for why she did not exercise her responsibility. He said in the court papers she had simply taken a “gratuitous swipe” at the Sassa CEO Thokozani Magwaza for trying to remedy the situation.

“The painful truth is that executive failed to carry out its duties. Parliament has also failed in its oversight duties,” Budlender said.

With the situation again arising of the executive and Parliament breaching their constitutional obligations, the responsibility now falls on the judiciary, civil society organisations and the Public Protector’s office to step in to protect the people of our country and state resources from being squandered. It is apparent that the ANC and its deployees in government and Parliament are again betraying those who elected them in order to shield their own and protect the patronage networks.

It is up to non-governmental organisations to represent the interests of the elderly, the poor, the disabled and young children who are dependent on grants for survival because our government does not care. It is up to the judges of the Constitutional Court to, quite ridiculously, have to haggle with CPS over how much of an increase they want in order to pay the grants. It is up to the media to keep asking questions that the minister and her acolytes refuse to answer.

In the words of the Chief Justice: “This is a crisis; we must do whatever is necessary to intervene to avoid the proliferation of the crisis.”

It seems that everyone apart from Dlamini and her party understands this.

This case is the point in history when the ANC government effectively became the enemy, the masters of the predator state from which the people of South Africa need to be protected. DM