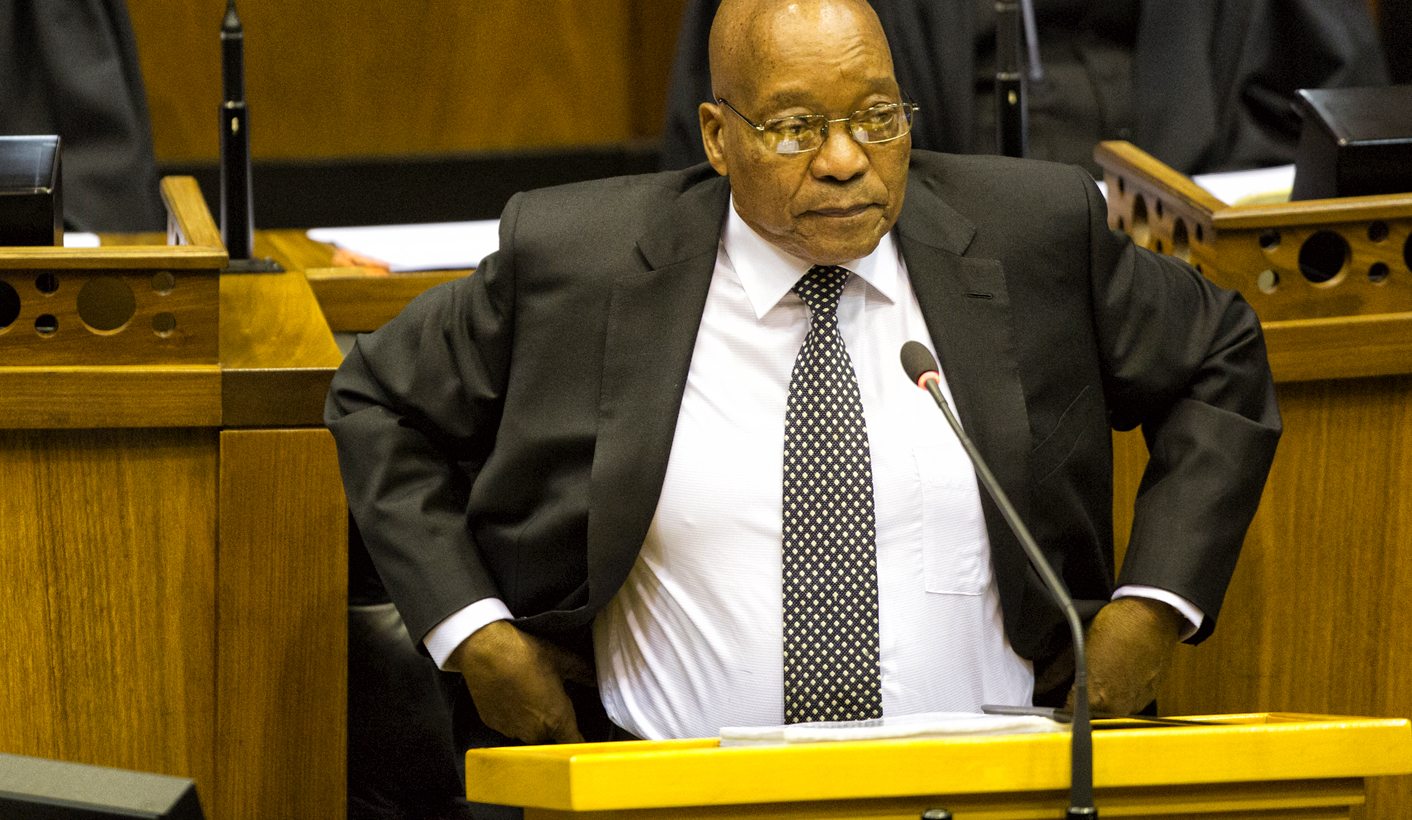 IFP MP Mkhuleko Hlengwa has asked for President Jacob Zuma to be investigated for misleading Parliament. It’s a serious matter, tantamount to being caught out lying. On Thursday the president said there was no proof of illegal deductions from social security grants. A year ago he said these illegal deductions had increased. A day after the Constitutional Court heard arguments on the debacle of the South African Social Security Agency (Sassa) and the Cash Paymaster (CPS) contract, there was no way politicians would not raise the saga at Thursday’s presidential question time in the House. By MARIANNE MERTEN.

“Please investigate the president whether he had not… right now misled Parliament. Msholozi, the issue is CPS is taking people’s money,” IFP MP Mkhuleko Hlengwa asked National Assembly Speaker Baleka Mbete, who is also the ANC national chairperson. After President Jacob Zuma dismissed claims of illegal deductions, calling for proof, Hlengwa rose to read from a transcript of House proceedings dated March 17, 2016, when President Jacob Zuma’s answer was: “Yes, illegal deductions are on the increase.”

It was a terse and heated affair even as the EFF benches were empty. There were highly unusual, and unparliamentary, direct exchanges between Zuma on the podium and DA leader Mmusi Maimane and United Democratic Movement (UDM) leader Bantu Holomisa on the benches. Zuma was clearly angered at the persistent questions around the grant deductions and how he was holding to account Social Development Minister Bathabile Dlamini.

The issue of grant deductions by companies linked to CPS – that in July 2016 Sassa laid criminal charges against CPS over deductions is in the public domain – had been raised earlier by IFP MP Liezl van der Merwe and Holomisa, who, uncharacteristically, angrily stood up and interrupted Zuma – thrice.

Outlining the deductions for airtime and electricity to social grants by companies linked to CPS, Holomisa initially asked whether it would not be prudent for government to apply for a court order to stop such deductions and recover the monies.

Zuma replied that there was a lot of talk on this matter, but no proof and people were quick to shout corruption. Holomisa interjected to say government had acknowledged in its own court papers that money was being illegally deducted. He told Zuma: “Thetha namageza akho anagangxoli apha e-House (Tell your fools/crazies to be quiet in the House)” – and that he was lying.

As Zuma continued to speak, Holomisa got up for the third time, but had his mic cut off. Ultimately he had to withdraw the comment that the president was lying, but calling ANC MPs fools was allowed to stand.

Throughout, Van der Merwe was on her feet, trying to catch the Speaker’s attention for a point of order. Mbete finally told her to sit down, without allowing her to raise her point.

Zuma earlier had also told her to bring proof of grant deductions. Van der Merwe had asked not only on the grant deductions but whether he would accept personal responsibility and also appoint a commission of inquiry into the Sassa debacle as already requested last year.

Said Zuma: “When she asked for a commission of inquiry (last year) she did not present any evidence. Even now, she wants me to do the same, on a matter that is being discussed. There are allegations perhaps. What we are working with now is to ensure they receive their benefits on the first (of April). That is caring. Do you want to divert me from doing that?”

Of course, the prepared response – presidential questions have a two-week lead time, but the follow-up questions like those of Hlengwa, Van der Merwe, Holomisa and Maimane are unscripted – was like putting on rose-tinted glasses.

“As government we will ensure that a sustainable payment solution is found which is compliant with our black economic empowerment imperatives. The solution must also help us to ensure that fraud and corruption do not take place in the social grants payment system. Government already saves about R1-billion annually in the social grants system currently through our effective anti-fraud measures in the Department of Social Development, which is a great achievement,” said Zuma.

“We deeply regret the current situation as government. We will ensure that there is never again any apprehension with regards to the payments of social grants to our people.”

That’s as close as it got to acknowledging that all’s not well.

Hours earlier Minister in the Presidency, Jeff Radebe, had a similar message in his briefing on this week’s Cabinet meeting. “Cabinet deeply regrets the anxiety caused by uncertainty over the payment of social grants to beneficiaries. We are a caring government and the needs of our people are our priority. We are collectively working towards ensuring that grant beneficiaries are not disadvantaged by these unfortunate events.”

Radebe put on a poker face when asked about Dlamini being held accountable, given that the CPS contract was declared invalid by the Constitutional Court in April 2014 and the focus on steps being taken now. Among those, a Cabinet decision to seek “legal advice on the viability of further legal action by the state, especially in addressing unlawful and irregular conduct where necessary (and) reviewing the conduct of the South African Social Security Agency especially in relation to its administrative capacity and management and making a recommendation”.

No, there was no call for Dlamini’s resignation, Radebe said:

“The issue of responsibility will only come at a later stage when the ministerial task team has looked at all issues surrounding the matter. Those recommendations will be made at an appropriate time”.

Now the focus was on finding solutions that are constitutional, legal and did not involve the outsourcing of a state function. “This in-sourcing of the grants is of paramount importance,” he said, adding that South Africa could not afford not to pay the grants come April 1.

Later in the House, Zuma, in response to DA leader Mmusi Maimane’s question as to what is being done to hold to account members of his Cabinet, particularly Dlamini, said there was no reason to take steps yet.

And, turning to Maimane, Zuma told him to stick to democracy and the rule of law. What he was asking was not the rule of law, more like the law of the jungle. “No, sir, I disagree, Honourable member. There’s no crisis,” said Zuma before giggling.

And that’s the line. Zuma told Freedom Front Plus MP Connie Mulder that “only after the first (of April) can you say to me: ‘Why are you not taking action?’.”

In other words, as long as we get there, politically, the end justifies the means. But the paper trail – be it court documents and judgments or Hansard, the official transcript of parliamentary sittings – will tell a different tale. DM

Photo: South African President Jacob Zuma replies to the debate about his State Of The Nation Address (SONA) in the parliament in Cape Town, South Africa, 16 February 2017. EPA/NIC BOTHMA