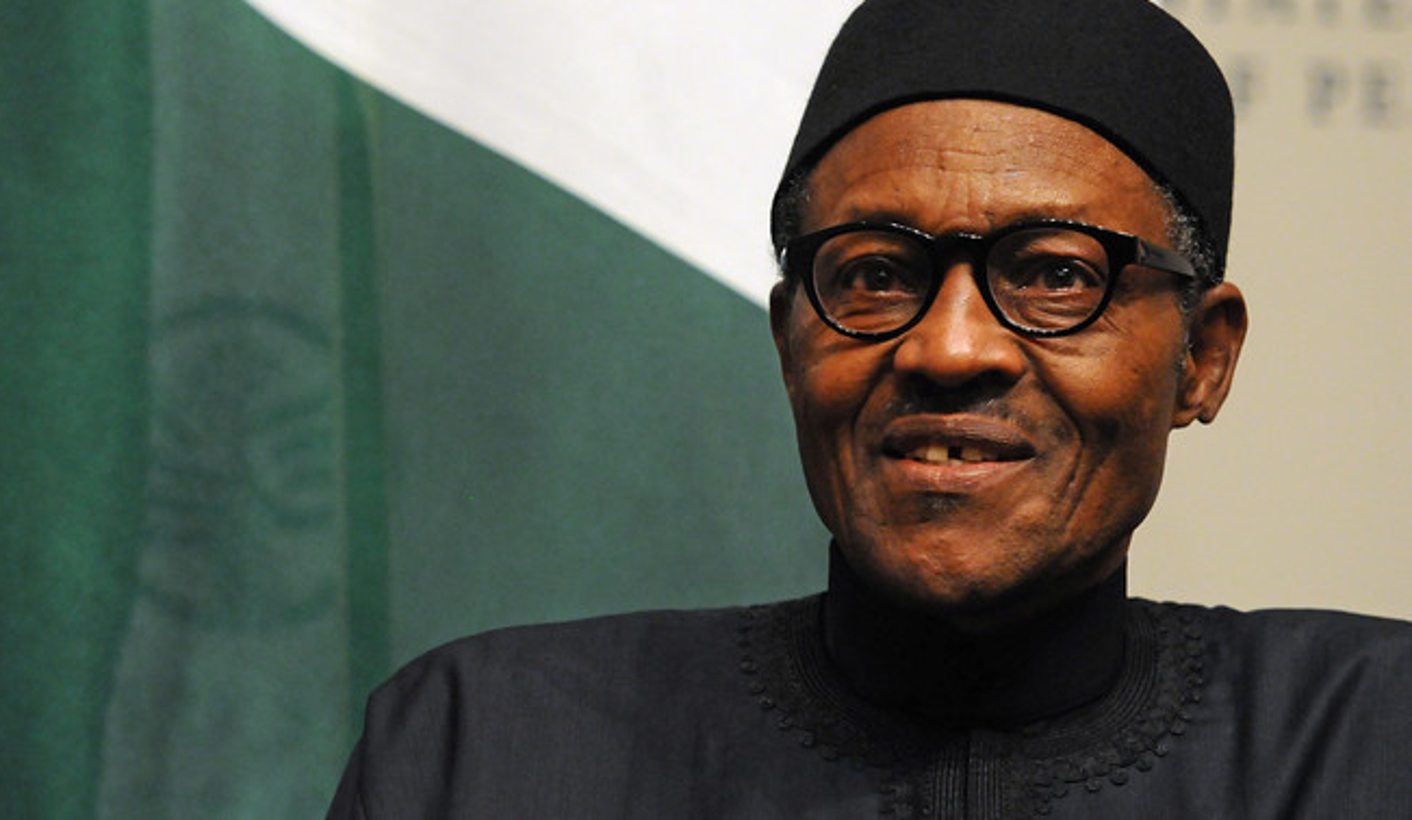 What would it mean for Nigeria’s economy and balance of power if Muhammadu Buhari were to leave office abruptly? By Peter Fabricius for ISS TODAY.

You know things are going badly when even your wife criticises the way you are running the country – publicly.

Nigeria’s First Lady Aisha Buhari recently told BBC that if her husband, Muhammadu, did not jack up his performance, she would not bother to campaign for his re-election. “The president does not know 45 out of 50 of the people he appointed and I don’t know them either, despite being his wife of 27 years,” she said, adding that her husband’s government lacked vision.

Buhari’s chauvinistic response did him no credit.

“I don’t know which party my wife belongs to, but she belongs to my kitchen and my living room and the other room,” he said. German Chancellor Angela Merkel, standing next to him, looked totally unimpressed.

Aisha Buhari’s political opinions may not be particularly relevant in themselves. But her radical departure from the almost universally observed custom of first ladies being totally devoted to their husbands, was surely telling.

When Buhari took over from Goodluck Jonathan in May 2015 after rare free, fair and peaceful elections – the first time an incumbent Nigerian president had willingly conceded defeat – he was hailed as the harbinger of a new Nigeria.

His people and African fans abroad had high – if perhaps unrealistic – hopes that Buhari would end the country’s chronic corruption, defeat the Boko Haram insurgency in the north and finally unlock the huge potential of an economy which had just officially overtaken South Africa to become the biggest in Africa.

Buhari himself is regarded as honest and as Dianna Games, CEO of Africa at Work says, “he has made corruption unfashionable” in Nigeria. And he had registered some success in tackling this Hydra-headed monster. But not enough.

He is also credited with taking the fight to Boko Haram with far more energy than Jonathan did, with the help of neighbouring countries and the international community. But Boko Haram is still terrorising local civilians in the north. Meanwhile the chronic militant insurgency at the other end of the country, in the Niger Delta, the heart of the oilfields, is bubbling again.

As Julia Bello-Schünemann, senior researcher in the African Futures and Innovation programme of the Institute for Security Studies in Lagos, points out, much of this has been beyond Buhari’s control. Not least the precipitous plunge in the international price of oil, which is Nigeria’s largest earner of foreign currency and state revenue by far.

This has been aggravated by the drop in oil production, caused by the Delta insurgency. Bello-Schünemann adds, however, that Buhari has not helped matters with his uncertain and haphazard policy response to such external pressures. He has unveiled plans to tackle the recession by trying to reduce the country’s huge dependence on oil exports and encouraging diversification into agriculture and manufacturing. But implementation has been half-hearted.

Economists are telling the government that to do that, it must let the naira float; allocating scarce foreign exchange according to market demand instead of the present, Abuja-directed policy of managing exchange rates by permitting imports of only products deemed by the government to be essential.

That has kept the naira-US dollar exchange rate at about 305-317. That is an improvement on the rate of about 197-199 that prevailed before the government unpegged the currency in June last year. But it is still a lot stronger than the black-market rate, which rose to 520 in February before settling back to around 460 this week. And this currency policy has encouraged unhelpful speculation.

Some economists believe allowing the naira to float would unblock a flood of investment and the consequent sharp devaluation of the currency would force Nigerians to cut imports and boost local production. The Africa Report this week said that this had already begun to happen in small measure, with previous importers of rice and other foodstuffs now buying from Nigerian farmers instead. However, the journal also noted that for two years, Buhari and central bank governor Godwin Emefiele have resisted letting the currency float freely.

During Buhari’s sick leave, his deputy Yemi Osinbajo took a more liberal approach to the currency and was generally credited with doing a good job of managing the economy – and tackling the Niger Delta crisis. But this week Emefiele – perhaps emboldened by Buhari’s return – fiercely shot down the idea of freeing the naira, saying his bank wouldn’t allow “faceless and criminally minded people to destroy the currency under the guise of a free float as is being canvassed”.

Bloomberg reported him as saying independent estimates and purchasing power parity analysis by the bank had showed that the currency shouldn’t be so low on the unofficial market, which had been influenced by “criminal activities,” he said. He warned that inflation, already near 18%, would rocket if the naira were to be floated, citing the recent precedent of Egypt. This would aggravate the hardship Nigerians were already suffering.

South Africans will be familiar with the notion of a government blaming its weak currency on criminal elements – after its competition authority recently charged a slew of domestic and international banks for collusion and price-fixing in currency trading.

But few independent economists or potential investors believe such activities can possibly have a major impact on exchange rates. Such accusations mostly have a counter-productive effect, convincing investors that governments lack the political courage to tackle the fundamental reforms that would really improve the economy in the long term.

A more cynical – but perhaps also rather too fanciful – interpretation of the Buhari administration’s reluctance to let the naira float could be that this would cost Nigeria its prized position as Africa’s biggest economy (in dollar terms).

It overtook South Africa in 2014 through a so-called “rebasing” of the economy, which brought forward the base year for calculations from 1990 to 2010, thus taking fuller account of new sectors such as banking and telecoms. But economists believe that as the naira has plummeted, South Africa may already have regained its top spot, when the economy is measured in US dollars – or would certainly do so if the naira were floated.

And of course, the other major factor in Buhari’s performance which is beyond his control is his health.

He stepped off a plane from London this week, looking frail and admitting he had “never felt worse” after almost two months of medical treatment in the United Kingdom. He frankly admitted to his compatriots that he would probably have to return to London for further treatment soon.

His frankness was only partial. Buhari has not revealed the nature of his illness, which is only fuelling speculation among Nigerians that it is very bad. His illness has come at a most unfortunate time, sapping the energy he needs to tackle the country’s huge challenges.

And the American strategic think tank Stratfor has forecast that if Buhari were forced to leave office abruptly, that could reverse the gains his administration has made in the fight against Boko Haram. Their argument is that Buhari is a Muslim northerner and if Vice-President Yemi Osinbajo, a Christian southerner, were to take over the presidency – that would infuriate notherners, who would feel cheated as they would believe another northerner should complete Buhari’s term, which is due to end in 2019.

That would provoke some northern politicians into lending support to Boko Haram, Stratfor argues. It claims the same thing happened before, in 2010, when another Muslim northerner, Umaru Yaradua, died in office and was replaced by his vice president Goodluck Jonathan, a Christian southerner.

This analysis seems rather extreme, suggesting that only a northerner could fight Boko Haram – or at least do so effectively.

And in some ways, one could say, an Osinbajo presidency could be a good thing, injecting more youthful energy into the presidency. Games wonders if the mammoth task of cleaning up the mess he inherited from Jonathan was not always going to be too much for the 74-year-old Buhari.

But whatever other consequences it might have, if Buhari were to leave office before his term ended, that would probably upset the delicate religious and regional balance of power on which so much of Nigerian politics is predicated. And that could be disruptive, at a particularly difficult time for the country. DM

Photo: President of Nigeria, Muhammadu Buhari, gave remarks and answered questions at the U.S. Institute of Peace on July 22, 2015 during his first visit to the United States since taking office. Photo: US Institute of Peace