GroundUp: Sophia’s Choice – Farmworker has to decide which of her children to feed 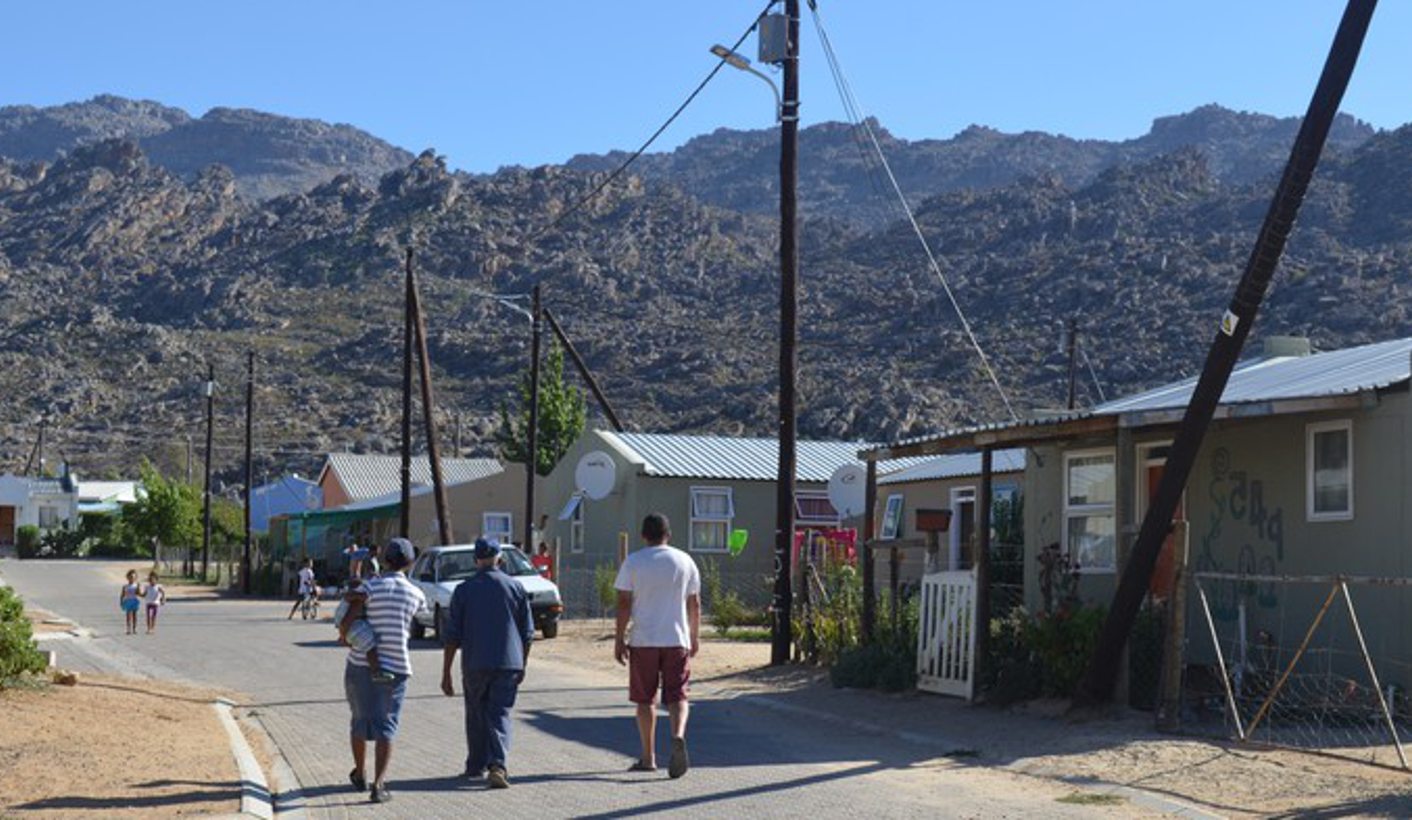 When loan repayments left Sophia* destitute, she had to beg a little money from her cousin and make a terrible choice. Either she could feed herself and her six-month-old baby, or she could feed her eight- and 13-year-old daughters. She chose the latter. When she stopped eating, she also stopped producing milk. Her baby’s weight dropped from 11.3kg to 8.8kg in three weeks. The clinic sister threatened to call the social worker. ERIN TORKELSON tells Sophia’s story, for GROUNDUP.

Sophia is a 36-year-old farmworker with four children, three of whom are on child support grants. For three long months, her grants just disappeared, eaten up by insurance and repayments on two loans, one of them fraudulent.

Desperate, she took out a loan, and then another. And everything went downhill from there.

On the 14th of every month, an EasyPay consultant visits Sophia’s rural town in the Western Cape, offering Net1’s suite of financial products. Net1 is the parent company of EasyPay, of Cash Paymaster Services (CPS), which pays out social grants on behalf of the SA Social Security Agency (Sassa), and of insurance company Smart Life and loan company Moneyline.

In September 2016, she met the consultant and applied for an emergency loan of R1,000 from Moneyline.

She and her children had been sleeping outside, or at a shelter, and she desperately needed the money to rent a backyard shack. This was not an entrepreneurial loan, where the money could potentially grow into a profitable business; this was strictly for consumption to cover her immediate costs.

She was told that in order to get the Moneyline loan she’d have to sign up for the EasyPay card (issued by Grindrod Bank) and for a R44-a-month SmartLife funeral insurance policy. Though she didn’t want either, she signed up.

Her loan repayment essentially amounted to R264 per month: R166.67 in repayment of the loan, R53.33 in service fees, and the R44 funeral policy.

It all came to too much, and in October Sophia found she could not cover all her monthly expenses. She visited another loan company in a nearby town, called XY Loans, and borrowed R256.

On September 30, XY Loans reimbursed those two transactions and loaded the R256 loan to her account. On the very same day, which was the day Sophia’s grant was paid, XY Loans made a further five deductions of R256 (R1,280). Because of the XY loan, Moneyline loan and Smart Life policy, Sophia was left with only R43.63. When she tried to access more information, she was also hit for R23.43 in EasyPay fees for balance inquiries and having insufficient funds in her account.

On October 31, her grant was paid. Immediately, XY made a further three deductions totaling R768, and then Moneyline, Smart Life, and EasyPay made their deductions, leaving her with R54.69.

On November 26, XY Loans loaded R381 into her account, and took out R1,400 in five separate transactions. Sophia ended the month R1,032.93 in the red. (Most South African debit accounts would never allow a client with  Sophia’s income to go R1,000 into overdraft.) When her December grant was paid, on November 28, she only had R39.82 for Christmas.

This is exactly the nightmare creditor scenario that allows Net1 to claim that its companies provide a better, more reliable service than the unscrupulous moneylenders which prey on the poor. But it is the Grindrod bank account, affiliated to CPS and Net1, that enables Sophia’s crisis.

Why can this happen?

To answer this question, we have to go back to May 2016, when the Minister of Social Development, Bathabile Dlamini, published new regulations to the Social Assistance Act in order to protect grant beneficiaries like Sophia against unauthorised and unlawful deductions from their social grants. These regulations were intended to stop all deductions from the Sassa-branded Grindrod accounts with the exception of one funeral policy, which amounts to no more than 10% of the grant, on pensions and disability grants.

These regulations have been challenged in the Pretoria High Court by several companies including Net1 and two of its subsidiaries.

In October 2016, Net1, FinBond Mutual Bank and SmartLife Insurance Company (both subsidiaries of Net1), and Information Technology Consultants (not affiliated to Net1) argued in court that the minister’s new regulations were invalid and she had overstepped her jurisdiction by attempting to intervene in the banking sector.

Net1 and its affiliates argued that the court should interpret the new regulations to restrict deductions before grants are paid into beneficiary accounts, but not after grants are paid.

They argued that though Sassa deposits a lump sum into CPS’s account, CPS is only allowed to pay funeral policies for pension and disability grant holders; once the remaining money is deposited into the individual accounts of grant recipients, these recipients should be “free” to use their money as they choose. Net1 contended that to limit deductions made after the grant is paid would be tantamount to inhibiting the “freedom” of grant beneficiaries.

The court has not yet pronounced judgment.

Net1, however, has developed a strategy for avoiding these regulations in the future. On its website, under risk factors”,  Net1 writes: “We have increasingly focused our South African business on providing financial products and services independently of Sassa through our EasyPay Everywhere [Grindrod] bank account and ATM infrastructure.”

What did Net1 do for Sophia?

Most South African banks offer fraud prevention and risk protection services. Often this involves a phone call or SMS alert when there is suspicious activity. But EasyPay Everywhere, linked to Grindrod Bank, offers no such service to its low-income clients.

Sophia tried to get help at her local Sassa office. Yet, because she had an EasyPay card, she was turned away. She visited the EasyPay consultant every time he came to her town: on October 14, November 14 and December 14. She demanded to see her account statements. Three times, she was told he would bring the statements the following month, but he never did. When she asked for the consultant’s name and phone number, he accused her of being “too clever”.

In February 2017 I met Sophia, with the Black Sash, at a community meeting led by its partner organisation, the Witzenberg Rural Development Centre. Together we drove more than 50km to the nearest Net1 Financial Services office. Sophia asked for a print-out of her account statement from September 1, 2016. We sat in the waiting room for over an hour as consultants emerged from the back to request her ID and, 30 minutes later, her EasyPay card. They also took cellphone pictures of us.

We were invited to the back office where we had to go through the same process again. When Sophia’s statement was finally printed, we saw what XY Loans had done.

She asked Net 1 Financial Services to help her. She wanted to pay off her Moneyline loan and cancel the SmartLife policy so she would get that money every month. She also wanted to cancel her EasyPay card and revert to her Sassa card. But it was not so simple.

The Terms and Conditions of Moneyline say that loans can be paid off early at any time at any Net1 Financial Services Branch. Since the loan was taken in September, Sophia should have been on her final instalment. But when we asked for the outstanding total, the consultant made a phone call, and told us the only person with computer access had gone home early. An hour and several bungled scans and e-mails later, we were told Sophia should pay R660.

The Terms and Conditions of Smart Life also say that policies can be cancelled at any time at any Net1 Financial Services Branch. Sophia, however, was told that the policy could not be cancelled immediately because the scanner did not recognise her fingerprint. She had taken the policy from a mobile consultant, who drives around to villages with paper forms, and thus her policy could not be accessed in the computer system. Instead, she would have to fill out a manual cancellation policy and wait 30 to 60 days.

The Terms and Conditions of EasyPay say that cards can be cancelled at any time at any Net1 Financial Services branch. We were told, however, that we could not cancel the card because of the XY loan – she had to keep her card open so XY Loans could continue to debit her account. Sophia pointed out that the debits were fraudulent, and if she had been given her statements by the consultant in her village, she would have asked for these to be stopped much earlier. She also pointed out that nothing had been deducted from her account by XY Loans for the past three months, so there was no continued claim on her account. But she was told to go to the XY Loans office (more than 50kms and a R100 taxi fare away) and get the original contract (there was none) or go to lay a claim at the police station in her home town. Failing this, Net1 had no facility to put a stop order on a fraudulent loan.

Middle-class South Africans can choose their bank, often a bank with branches and ATMs near their homes.

Middle-class South Africans can access comprehensive account statements, and can apply for and cancel products at any time.

Middle-class South Africans are not pressured into taking products they do not want or can’t afford.

Middle-class South Africans have debit accounts that do not allow them to go into R1,000 worth of debt each month.

None of this was available to Sophia. Far from “including” the poor in the banking system on the same terms and conditions as middle-class South Africans, Net1 and Grindrod have created a segregated banking system – a Bantustan banking system – designed to allow corporations to profit off the social grant system.

With Black Sash’s assistance, Sophia got her money back from XY Loans. She is paying for childcare with that money, and has gone back to farm work. All her children, including her 9-month-old, are healthy.

In her case, tragedy has been averted. But what of the millions of other South Africans who survive on the slimmest of margins? DM

* Not her real name

Erin Torkelson is a Ph.D student at the University of Berkeley, California, and a former intern at the Black Sash. Opinions expressed are not necessarily those of GroundUp.