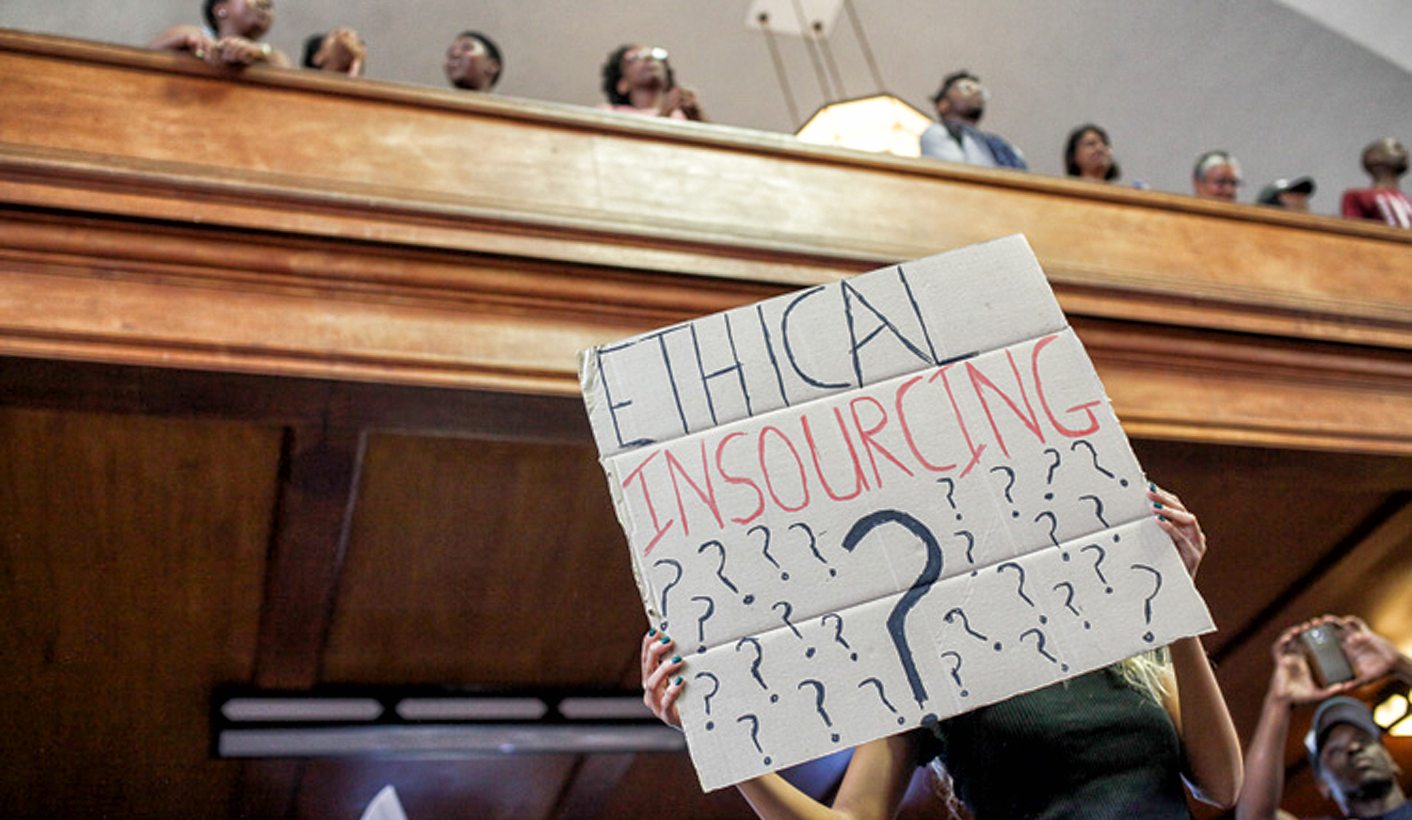 Only one university in the Western Cape has brought all workers onto its payroll, despite all four universities beginning debates on “insourcing” in 2015, one of the rallying cries during the #FeesMustFall protests. By Ashleigh Furlong for GROUNDUP.

Outsourcing of cleaners, catering staff, security guards, gardeners and others results in workers’ remuneration being lower than if they were employed directly by universities. Another benefit for workers of being insourced is that they can receive the same benefits as university employees, such as reduced university fees.

The University of the Western Cape (UWC)

UWC spokesperson Luthando Tyhalibongo told GroundUp that the university could not bring about 600 currently outsourced workers onto the staff “without facing retrenchments and possible bankruptcy in the immediate years to come”.

The workers are employed by six different companies. One of these, Securitas, dismissed 144 employees in January this year following incidents during last year’s student protests. They were dismissed on charges of being absent from work without permission, “hostage” and “assault and robbery” – charges that the workers deny.

Mfaxa Ntobeko, one of the dismissed workers, said that they were in a “terrible situation”, adding, “We are now unemployed without any income.”

Some feared that they would be kicked out by landlords and that their children would be expelled from school. Most of the workers were repaying loans and were worried about being blacklisted as they could no longer pay, he said.

Ntobeko said that the problem had arisen during the student-led shutdown of the university in October, when students marched from building to building ensuring that classes and work were stopped.

He said they went home on October 17 as the campus was shut down. They had returned when the shutdown was suspended on November 16, he said. While they were away from work, the protests escalated at the university, with clashes between protesting students, police and security guards.

After the workers returned, Securitas attempted to secure an urgent interdict against their workers for “absconding”, but the interdict was denied.

Following this, workers were charged at an internal hearing with absence from work without permission, assault and robbery of a supervisor and keeping four managers hostage against their will.

Ntobeko said they had all been dismissed on January 13 after the internal hearing.

Mark Sangster, the director of corporate governance at Securitas, told GroundUp that they had video footage of the assault and the hostage situation and were able to identify staff who were implicated.

“Staff absented themselves from the university during a period of student protest – this without our (the employer) permission. We requested them to return to work and also offered to redeploy them to another site if necessary. They did not return to work, nor did they respond to our offer of redeployment, so we believed that we had no alternative but to proceed with the charges of absenteeism,” he said.

On March 7, the matter was heard by the Commission for Conciliation, Mediation and Arbitration (CCMA), but there was no resolution. Ntobeko said that Securitas said during the session that they were willing to take employees back but only after 24 months and not at UWC.

“But this is where there are workers’ benefits like the top-up salary and the study rebate,” said Ntobeko, explaining why they wanted to return to UWC.

Securitas was paying him R3,700, but with the top-up from the university he was earning R5,700 a month. Top-ups started after the protests in February 2016.

Tyhalibongo said the matter was between the workers and their employer. The university would await the outcome of the CCMA process, he said.

Stellenbosch University has opted for a system termed “viable sourcing”. This means that the university provides subsidies to outsourced workers so that they earn R5,300 per month, the minimum entry level salary of a university employee. Just under 1,000 people benefit from this top-up.

In addition, in March last year the university said that when current contracts with outsourced services came to an end, “all viable options will be considered in taking final decisions” on how those services are provided to the university.

The University of Cape Town (UCT)

However, on March 14 some insourced workers demonstrated in the Bremner Building over working conditions and conditions of employment.

More than a year ago, GroundUp was told that the vice-chancellor was heading a Management Committee Task Team “to investigate various models for insourcing/outsourcing” and that options would be tabled at a council meeting last March.

Lauren Kansley, CPUT spokesperson, said the university was engaging in a process of insourcing, but “details of salary and package have not been confirmed yet”.

She did not respond to questions about how many workers were currently outsourced, which companies were involved or whether outsourced workers received any additional benefits from the university. DM

Photo: UCT students demand in 2016 that outsourced workers be brought onto the staff. Photo: Ashraf Hendricks